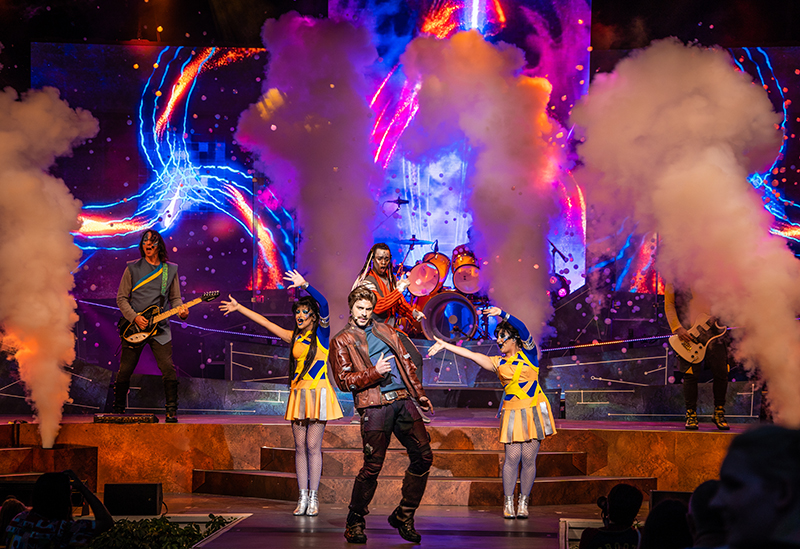 Looking for an out of this world meal at Walt Disney World? Head on over to Epcot to try the newest menu additions in celebration of “Guardians of the Galaxy — Awesome Mix Live!” In this post, we’ll review these intergalactic, limited time foods and let you know whether they’re worth your time, money, and appetite.

The thing about the galaxy is that it’s a big place. Usually, the phrase “out of this world” has a positive connotation, but it’s not entirely clear to me why that is. Okay, so ALF is out of this world, and widely considered to be the greatest thing ever. On the other hand, Kang and Kodos are out of this world, and not good. There are also killer clowns from outer space, and no one likes them. Then there’s Jar Jar Binks, who makes Jabba the Hutt look like an out of this world MVP.

The point is that out of this world things are, at best, a mixed bag. As we approach these Guardians of the Galaxy-themed offerings at Epcot’s Liberty Inn, that’s an important thing to keep in mind. To borrow a phrase from another outer space franchise, it would seem that these were shipped from a galaxy far, far away. Probably from Xandar to Earth via media mail.

Before we get to the food, the whole reason this stuff exists is because “Guardians of the Galaxy — Awesome Mix Live!” has returned for another summer run. This concert is performed across from Liberty Inn at America Gardens Theater from June 14 to August 18, 2019 at 1:30 p.m., 2:30 p.m., 3:45 p.m., 6:45 p.m., and 8 p.m. daily. The premise of the concert is cheesy–an alien band from the planet Xandar visits Earth as part of an outreach program to share Xandar’s rich heritage and culture with Earth’s people.

Peter Quill, known Epcot fan and visitor to the park as a child, has informed Xandar’s leaders that there’s already a place on Earth with a similar mission. Naturally, that place is Epcot, where all cultures are celebrated. Consequently, Xandar sent some of their most talented musicians to perform the human audiences’ best-loved hits from the 70s and 80s, namely music from Awesome Mix Volumes 1 & 2.

The premise is really hokey, but once you get past that the music is enjoyable and fitting of a summer concert series at Epcot. I would say that ‘Awesome Mix Live!’ is also one of those things we’ll look back on as quintessential “Weird Disney World” in another decade, but Guardians of the Galaxy permanently invade Epcot with an E-Ticket attraction in a couple of years, so this is probably the future norm rather than an anomaly. 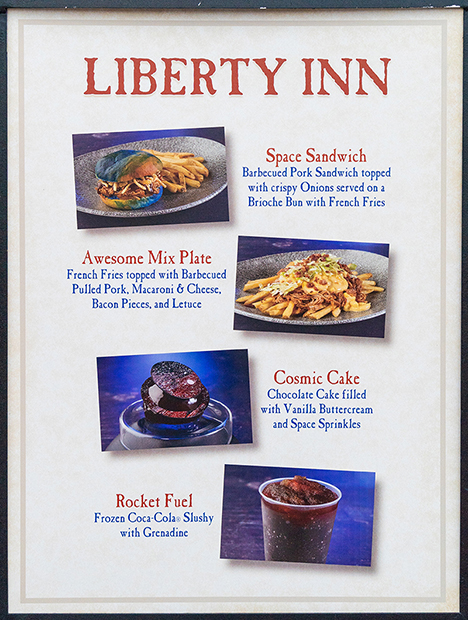 Above is the menu at Liberty Inn to ‘celebrate’ the return of “Guardians of the Galaxy – Awesome Mix Live!”

We tried everything except Rocket Fuel, as we’re not wasting money to tell you what a cherry Coke slushy tastes like when it has a different name… 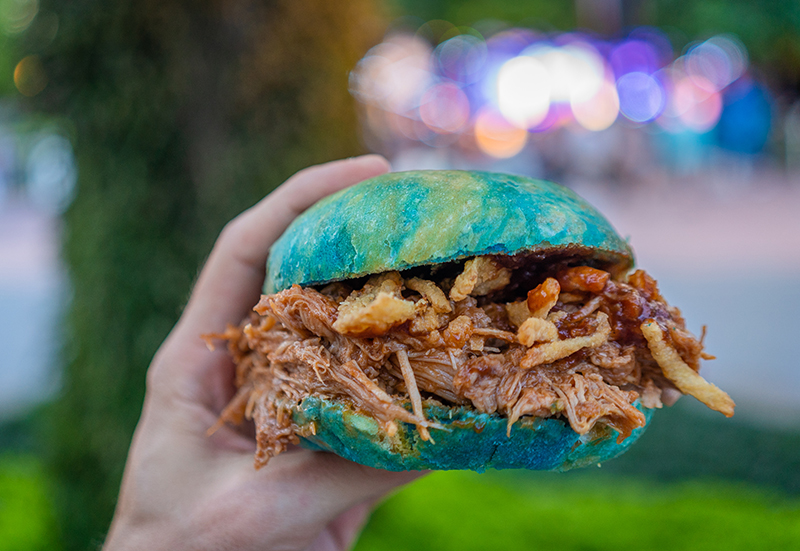 I have to admit, this sandwich is very on-theme. In the photo above, doesn’t it look like an alien invader, poised to attack my face?! 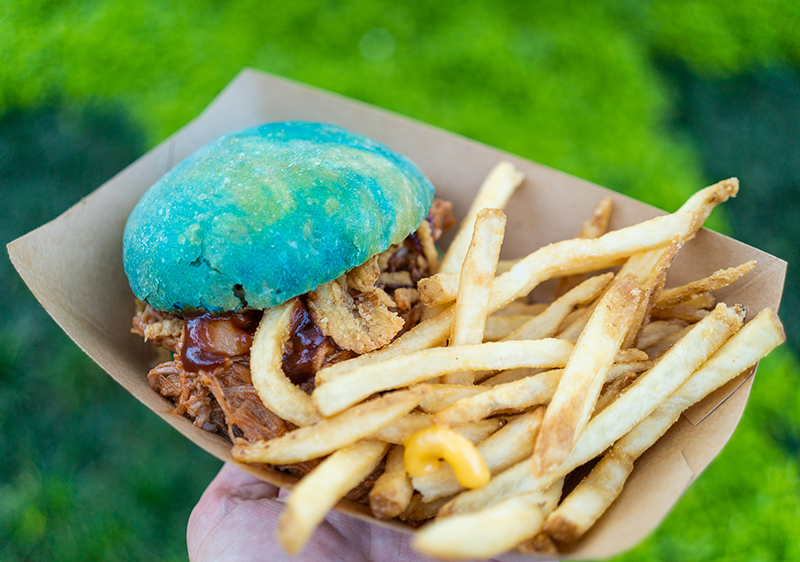 After my fears subsided that the Space Sandwich might just bite me, or that the bun was actually moldy (that’ll happen when you use media mail to ship from Xandar), I gave it a try.

The results were…not good. This is supposedly a normal brioche bun dyed a different color, but it tasted even dryer than a normal Disney bun. The BBQ pork was standard Walt Disney World quality, which is to say nothing special. The crispy onions didn’t add much in the way of texture. It’s not the worst counter service entree you can order at Epcot, but it’s also not in the top 50. 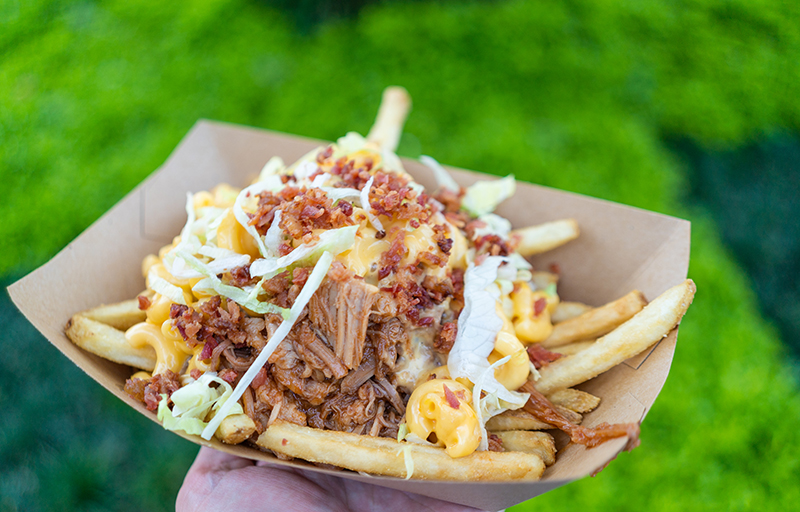 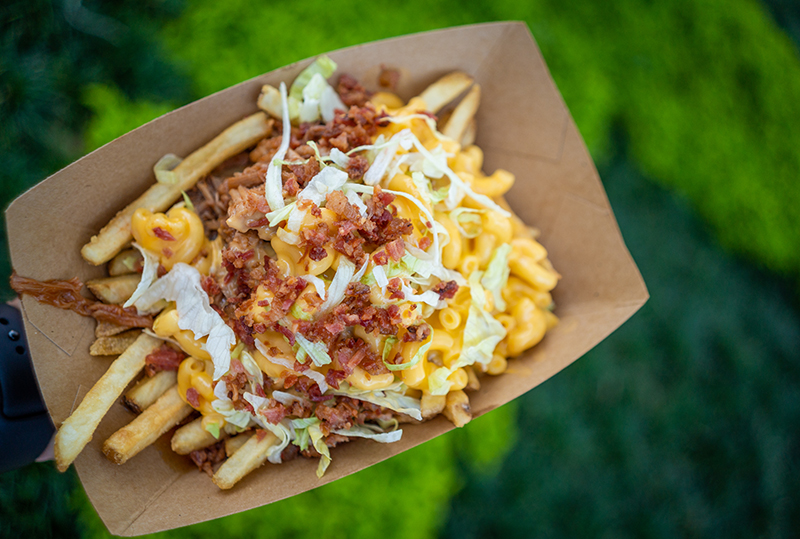 Nothing about this dish stands out, but it’s a hearty portion and it doesn’t offend in any way, either. If you’re looking for a guilty pleasure or comfort food entree, it could work. (It would also make a good 2-4 person shareable snack while Drinking Around the World.)

However, even in terms of ‘loaded fries’ type dishes at Epcot’s World Showcase, it’s not your best option. That title goes to the poutine over at Refreshment Port. Here’s a look at the Beef Brisket Poutine: 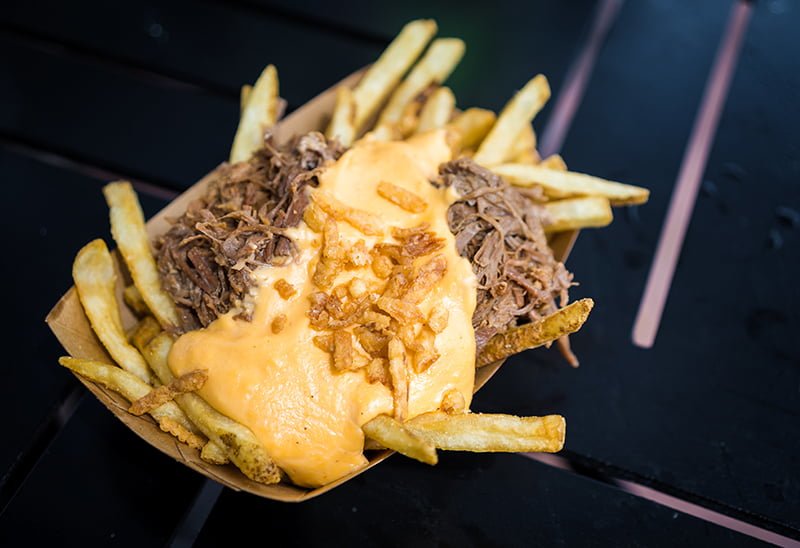 This is roughly the same size portion for $3 less.

If I had to choose between the two, I’d pick the poutine, hands down–and that’s even if the price were the same for each of them. The poutine’s quality is superior, as is the taste. 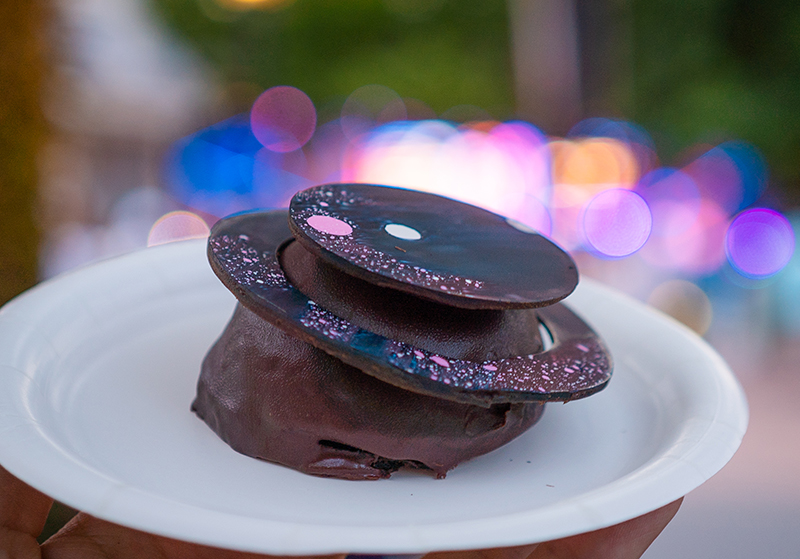 Finally, we have the Cosmic Cake filled with vanilla buttercream and space sprinkles.

If you’ve ever had a semi-dense pre-made chocolate cake from a Walt Disney World counter service restaurant, you know exactly what to expect here. 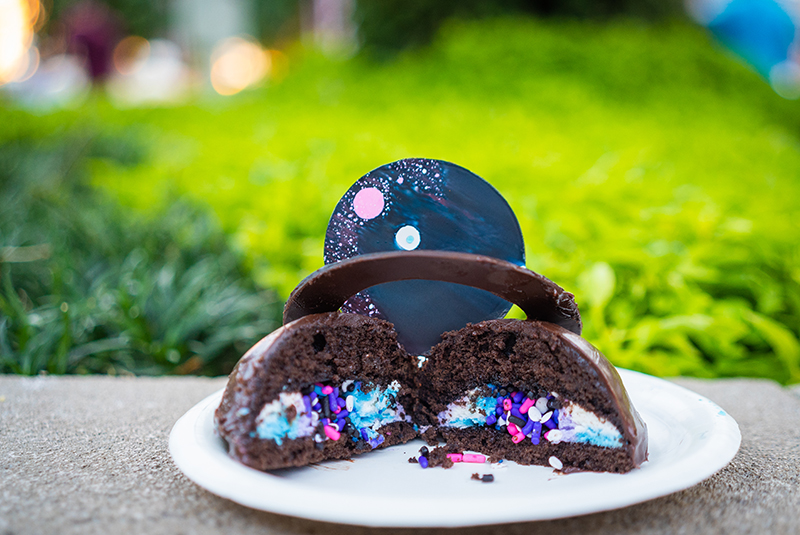 Rich chocolate is the predominant flavor, with a bit of cheap vanilla frosting and sprinkles mixed in for some reason.

Don’t touch this cake under any circumstances, or it’ll stain your hands (as I learned from cutting it in half for this cross-section photo). Oh, and don’t let it touch your teeth or tongue for the same reason. So good luck eating it, I guess. (The moral of the story is that you shouldn’t order this.) 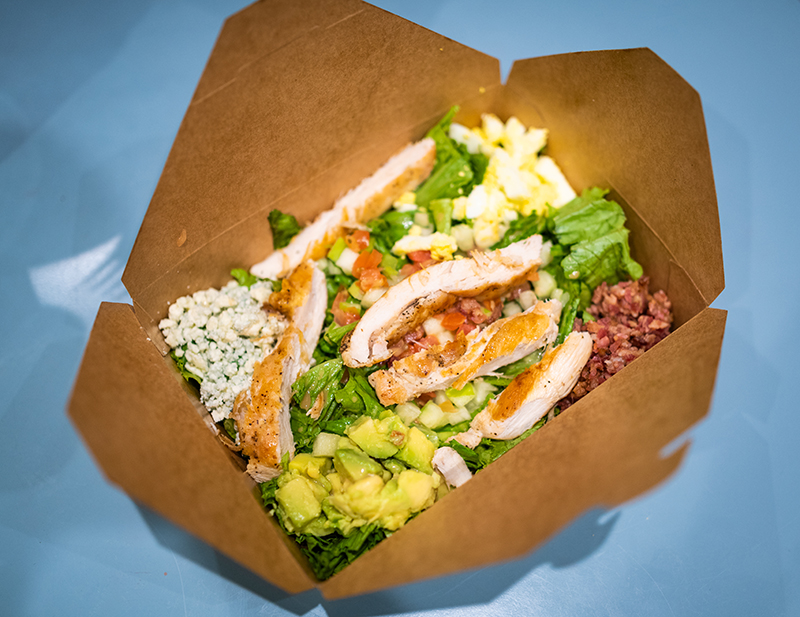 There is some good news at Liberty Inn, though it has nothing to do with this Guardians of the Galaxy ‘Awesome Mix Tape’ menu.

The standard menu has been improving of late. The Cobb Salad (pictured above) in particular is a stand out, and Sarah liked the Grilled Vegetable Burger. There’s still a ton of room for improvement, but it’s no longer one of the 5 worst counter service restaurants at Walt Disney World, so that’s a plus.

It still might play into embarrassing stereotypes about America a bit too much, but at least now Liberty Inn also embarrasses Xandar. Judging by the questionable items imported from there for the Awesome Mix Tape menu, Xandar’s food is clearly much worse than America’s! 😉

Have you tried the Guardians of the Galaxy food at Epcot? Do you agree or disagree with our review? Will you be disregarding our warnings and ordering this stuff anyway? Any questions we can help you answer? Hearing your feedback–even when you disagree with us–is both interesting to us and helpful to other readers, so please share your thoughts below in the comments!