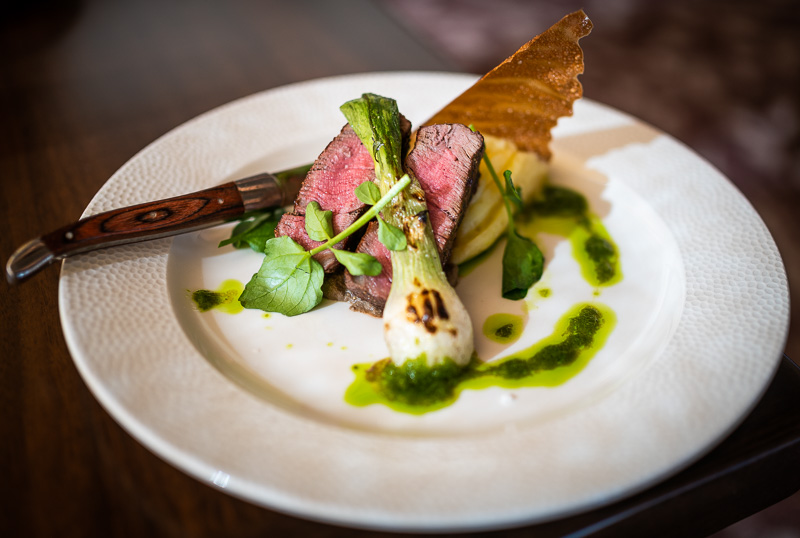 For dinner, Topolino’s Terrace is a Signature Restaurant at Walt Disney World’s new Riviera Resort. In this WDW dining review, we’ll share food photos, a look at the upscale atmosphere, thoughts on how this fine dining compares to other locations, whether it’s worth the money, and more.

Starting with the basics, Topolino’s Terrace — Flavors of the Riviera participates in the Disney Dining Plan as a 2-credit table service restaurant for dinner. It also accepts the Tables in Wonderland card for a 20% discount and Disney Vacation Club or Annual Passholder discounts for 10% off. In terms of pricing, Topolino’s Terrace is comparable to California Grill, and it very much feelers like a more modern and chic reinvention of that concept.

Those who have read our Review of Breakfast Á la Art with Mickey & Friends at Topolino’s Terrace — Flavors of the Riviera are likely unsurprised by this pick, as we’ve gushed about that meal repeatedly. We’re even bigger fans of dinner, having also done dinner multiple times.

All told, we’ve dined at Topolino’s Terrace more than any other restaurant at Walt Disney World in the last year-plus, and there’s a reason we keep going back. Whether it be for the fun character breakfast or a romantic date night, the atmosphere at Topolino’s Terrace is pitch-perfect, and the food is fantastic. 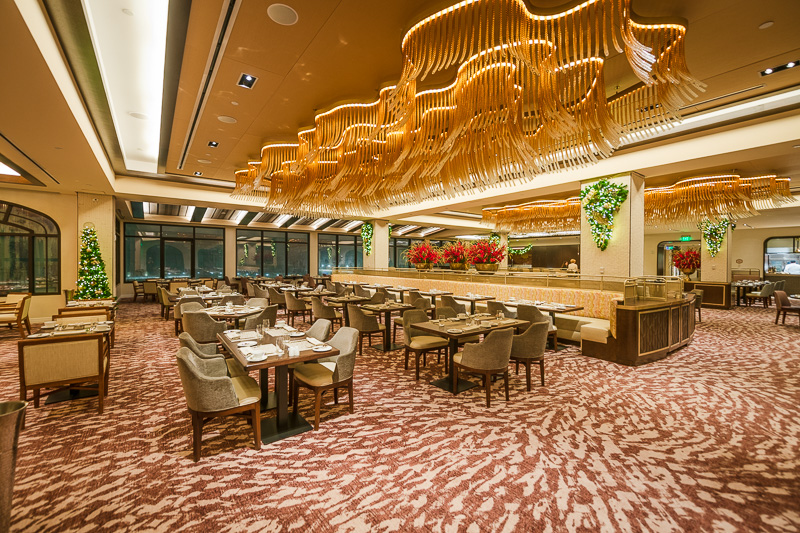 With that said, one thing we do have to acknowledge is how we’ve qualified the title with “right now.” We absolutely recommend Topolino’s Terrace – Flavors of the Riviera now or during normal times, but its stock has definitely risen during the reopening as most other elite Signature Restaurants are currently closed.

In our Top 10 Table Service Restaurants at Walt Disney World, Topolino’s Terrace ranked #4. However, that list was last updated during the closure last year. The top 3 are still closed, and may not reopen this year at all. Even when they do, they’re all far less approachable and are more niche options. So you could say that even during “normal times,” Topolino’s Terrace is the best regular restaurant at Walt Disney World. 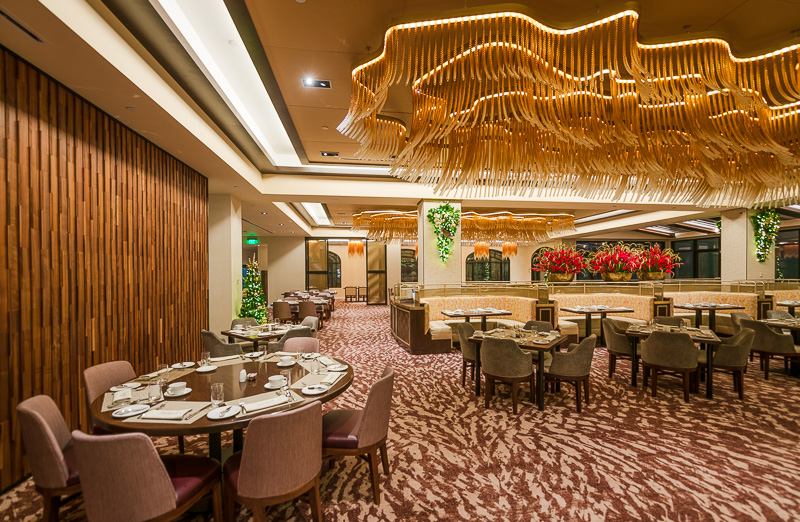 We’ve already discussed it in our Breakfast Á la Art with Mickey & Friends Reviews, but atmosphere is another advantage offered by Topolino’s Terrace — Flavors of the Riviera, which is light, airy, and inviting. As noted above, this rooftop restaurant is the resort’s Signature Dining, and it shows. The dining room and decor are all elegant and refined (but without pretension), and the views are breathtaking.

The key difference in the evening is that the dining room has moody lighting and a more adult atmosphere. If you have kids or are looking for something more relaxed, we’d suggest doing dinner at Topolino’s Terrace before sunset. At the other end of the spectrum, Topolino’s Terrace will also offer views of the fireworks at Disney’s Hollywood Studios and EPCOT at some point, making a later seating more desirable. 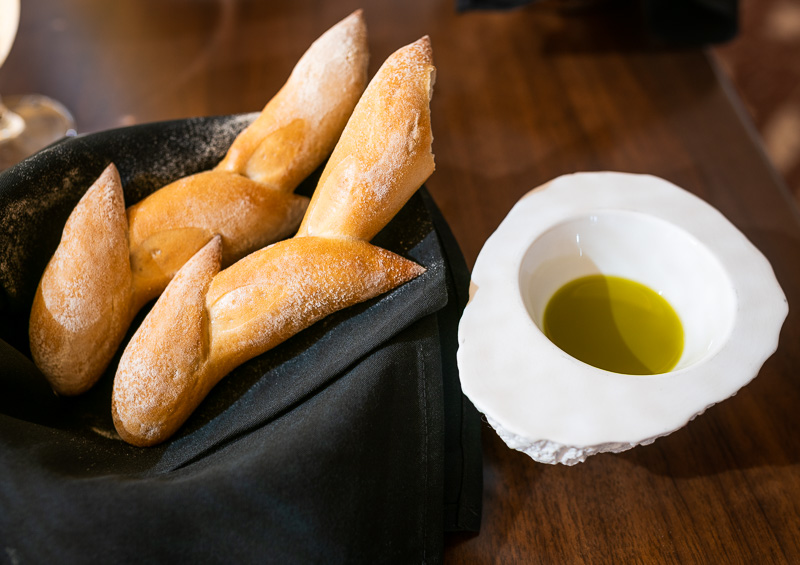 Both the breads and the olive oil(s) are high quality, but it’s still nothing overly impressive. Some Walt Disney World restaurants have special bread recipes or addictively good butters that overshadow the paid portion of the meal. Topolino’s Terrace is not one of them. 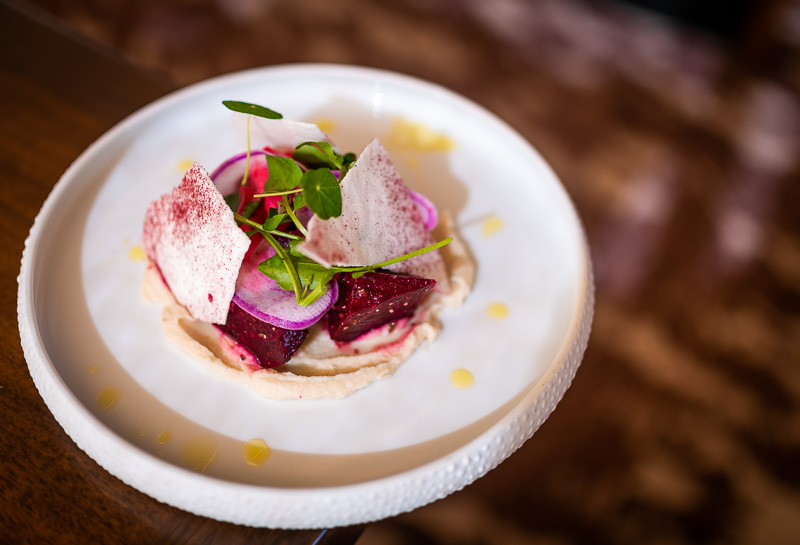 This was ordered over my grumbling; it may surprise you that my first thought when dining out is not “what beet dishes are being served at this venerable establishment?” I will be the first to admit that my preconceptions were wrong. From a marketing perspective, they should probably lead with “meringue,” as beets aren’t going to sell this dish to most guests. I’m guessing the Schrutes aren’t regulars at Topolino’s Terrace. 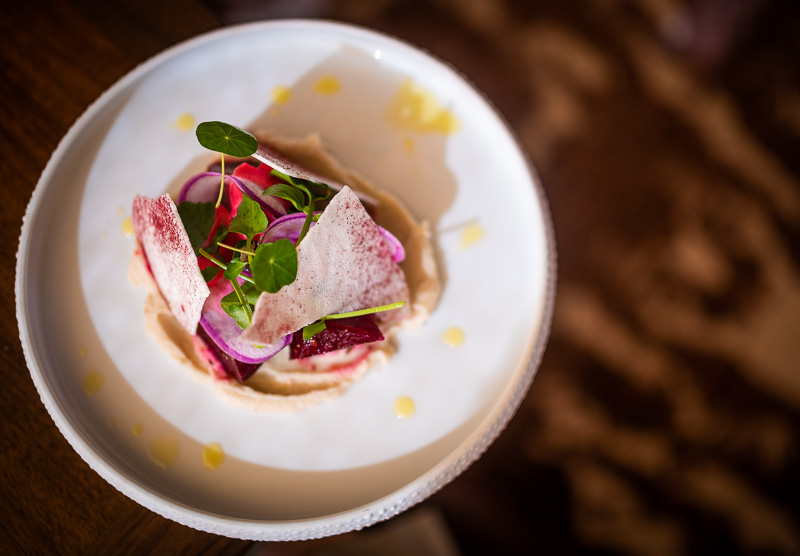 Honestly, I don’t even know how to describe the Beets Barigoule. It’s a beautiful dish, a symphony of contrasting and complimentary flavors–many of which are absolutely not what you’d expect given the menu description.

If willing to step outside your comfort zone at Topolino’s Terrace, do it with this appetizer. Trust me, you’ll be rewarded. (Also, you were right, Sarah!) 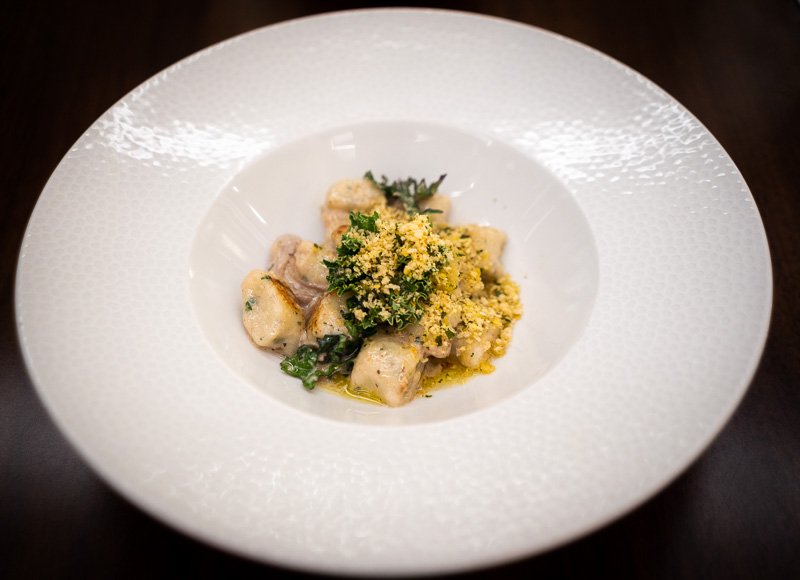 This came at the recommendation of our waiter, who said it was his favorite item on the entire menu at Topolino’s Terrace. He wasn’t wrong. The gnocchi was like an edible pillow (in a good way) with the pesto packing a powerfully rich and flavorful punch. The duck confit was delicious, and the pine nuts added a nice crunch and texture. The kale was present. The only downside was the portion–this is probably not to be shared. Highly recommended. 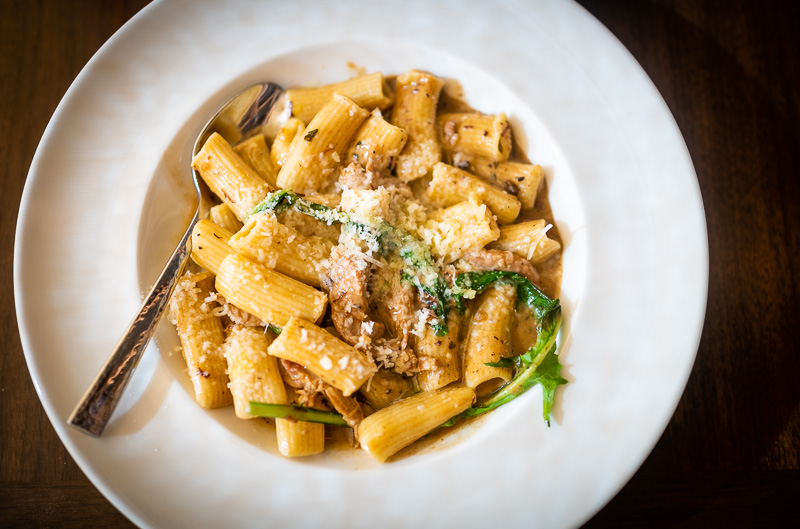 For our entrees, we’ll begin with a staple off the hand-crafted pasta menu, the Rigatoni: Braised Chicken Sugo, Broccolini Rapini, Wild Mushrooms, and Parmigiano-Reggiano.

Everything about this heavy dish was solid–high quality pasta, savory chicken, great mushrooms, etc–and all of it was perfectly prepared. It’s quintessential Italian comfort food, so no complaints there. At other restaurants, it might be a menu standout; at Topolino’s Terrace, it’s the weakest item we’ve tried. It’s all relative. 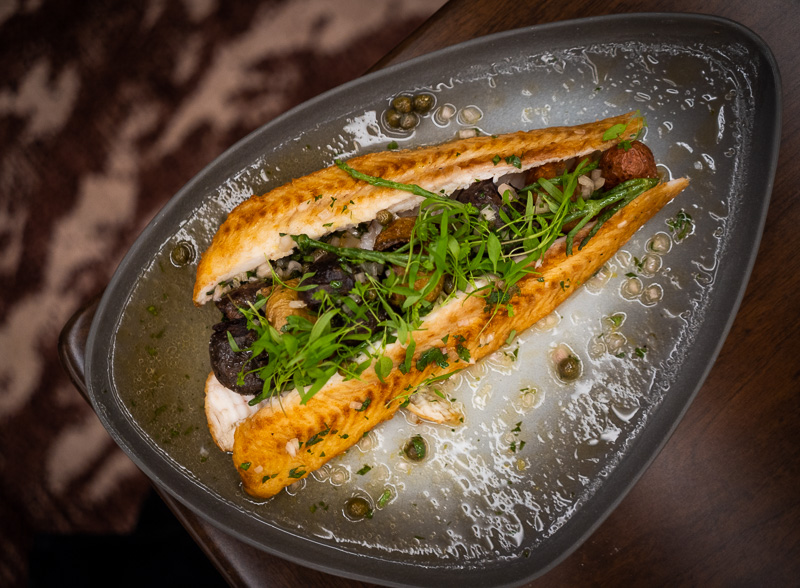 Next up, the Classic Sole Meunière: Sea Beans, Capers, Lemon, and Petite Potatoes.

This classic French fish is worth a try if you’ve never had sole before. It’s a rich dish that is approximately half fish, half butter. (I’m joking…somewhat.) The sole itself is mild and delicious, with a nice exterior crispness for texture. The lemon and butter provide nice contrasts that up the flavor profile while keeping the fish central to the dish. I don’t want to undersell it, because this was excellent–it rivals both of the dishes below. Highly recommended. 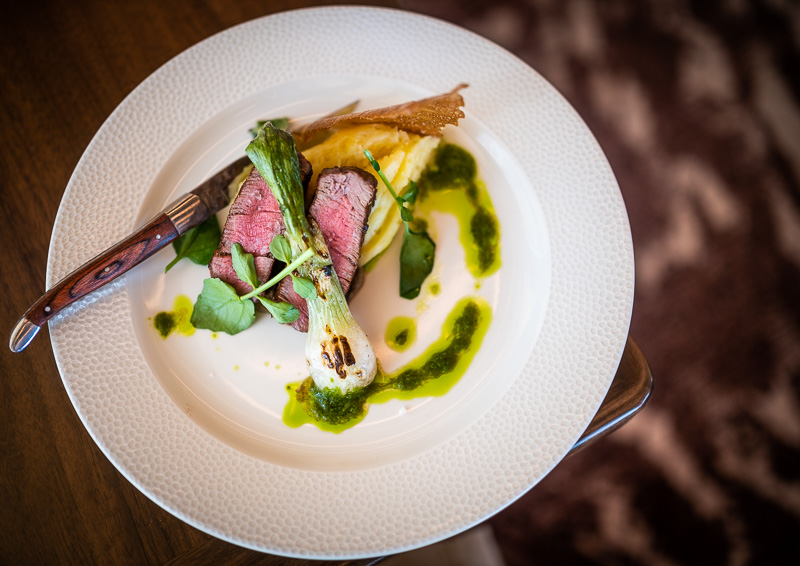 Walt Disney World generally does a good job with filet mignon (same goes for scallops–another menu option that we have not yet ordered), and this took that to the next level. The meat itself was top-notch, with the characteristic tenderness and flavor you’d expect from filet mignon. However, the accompaniments took it to the next level. The truffled mashed potatoes were divine, and the mushroom puree and vinaigrette paired brilliantly. Highly recommended, especially if you want a tried and true favorite. 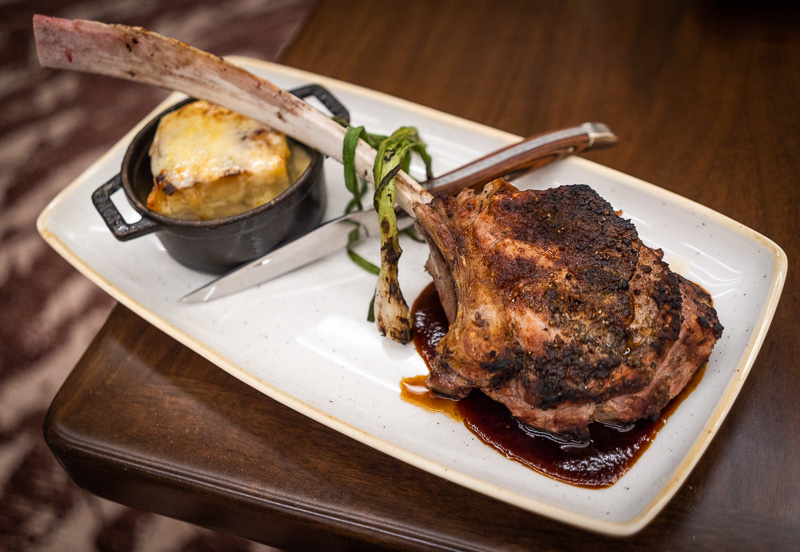 Literally the only downside about this glorious cut of meat is that you’ll be tempted to brandish it like a giant sword, grabbing it by the bone and thrusting it into the air. Or perhaps I’m just barbaric. There’s an innate appeal to these comically colossal cuts of meat for me. Maybe that’s why my grandma always says I act like I was “born in a barn and raised by the wolves.” That doesn’t really make sense (no wolves lived in our barn–just mean raccoons), but I guess she’d know.

Anyway, the Tomahawk Veal Chop was absolutely fantastic. A perfect cut of meat that was flavorful, tender, and absolutely cooked to perfection with a great exterior char and rub for flavor. The rich veal jus helped enhance the meat without overpowering it–and without the lemon being overly prominent. The potatoes were also decadent and delicious. This is my favorite entree on the menu. 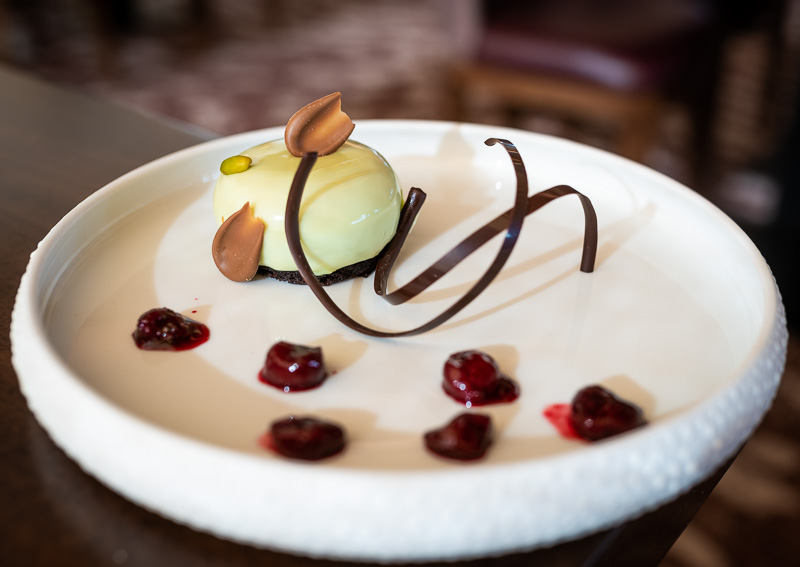 I’m not going to fixate on this. It’s very good, with a delightful mix of flavors and textures. It would be a top tier dessert anywhere else, but you should not order it… 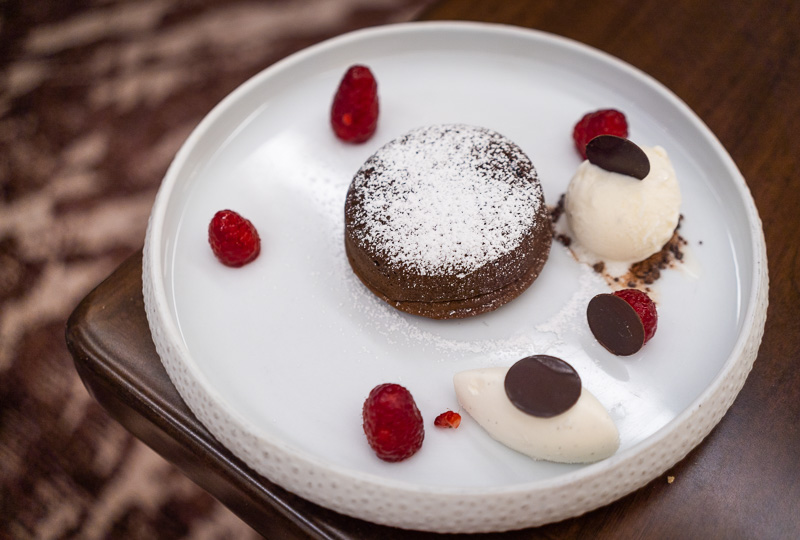 Last but certainly not least, the Warm Valrhona Chocolate Cake with Caramel Center, Chantilly, and Raspberries.

This is the best dessert anywhere at Walt Disney World. It feels like I’ve said that before…probably more than once. When it comes to delicious desserts, there’s undoubtedly recency bias at play. Nevertheless, it’s absolutely true here. 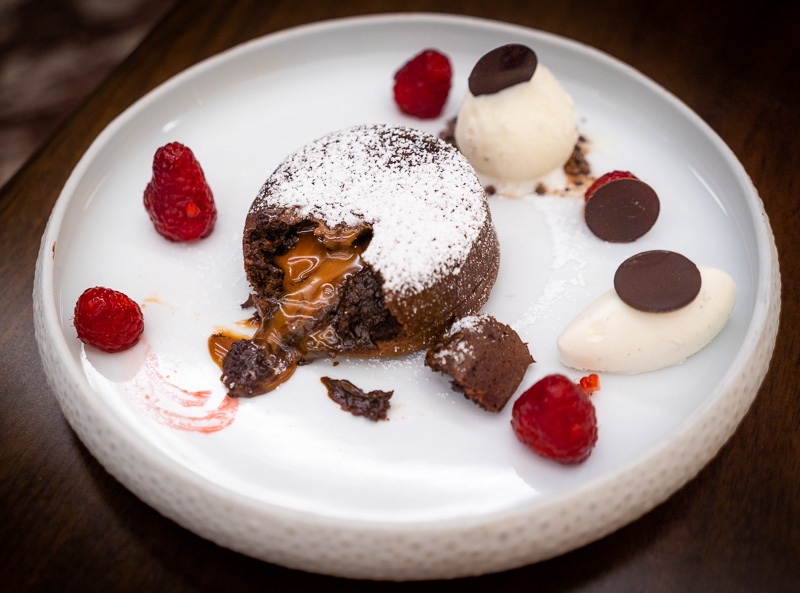 This Warm Valrhona Chocolate Cake reminds me of the Hawaiian Kona Chocolate Soufflé we once had at Victoria & Albert’s. That was several years ago, and I still think about it.

This is better than my memory of that. The difference-maker here is the caramel center, which gives the dessert a nice salty quality to offset some of the sweetness. The quality is just off the charts, and the vanilla gelato and cream elevate it even further. It would be easy to dismiss this as “just another lava cake,” but that wouldn’t even begin to do it justice. It was so good that we almost ordered a second after we polished off the first–and this alone is why we’ll be back to Topolino’s Terrace for yet another meal. Okay, not really just this, but it’s one big reason! 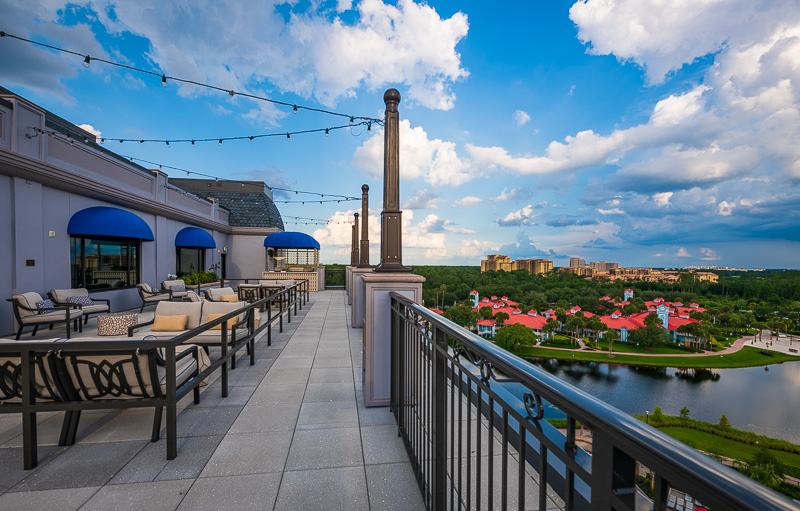 Ultimately, it should be pretty clear from all of this why Topolino’s Terrace – Flavors of the Riviera is our favorite restaurant in Walt Disney World right now. While it doesn’t quite rise to the quality of a handful of elite dining experiences in the parks and resorts, it’s the best mainstream option at more palatable price points.

That’s true whether you’re comparing Topolino’s Terrace to restaurants that are open or closed. It’s better than Flying Fish, Narcoosee’s, Citricos, Jiko, and many others. Topolino’s Terrace also edges out its closest competitors–California Grill and Toledo–in terms of both atmosphere and cuisine. While the views are better at its rooftop restaurant counterparts, Topolino’s Terrace tops both when it comes to the complete experience. We highly recommend it for your next date night at Walt Disney World, whenever that might be. What’s that you say, you need more information before booking Topolino’s Terrace? Okay, we’ll do the tough work and head back for a few more research meals! 😉

Have you dined at Topolino’s Terrace – Flavors of the Riviera? Do you agree or disagree with our review? Would you consider it one of the best (or the best) Signature Dining experiences or ‘regular’ restaurants at Walt Disney World? If you haven’t dined here, does this sound appealing to you or not? Any questions we can help you answer? Hearing your feedback–even when you disagree with us–is both interesting to us and helpful to other readers, so please share your thoughts below in the comments!