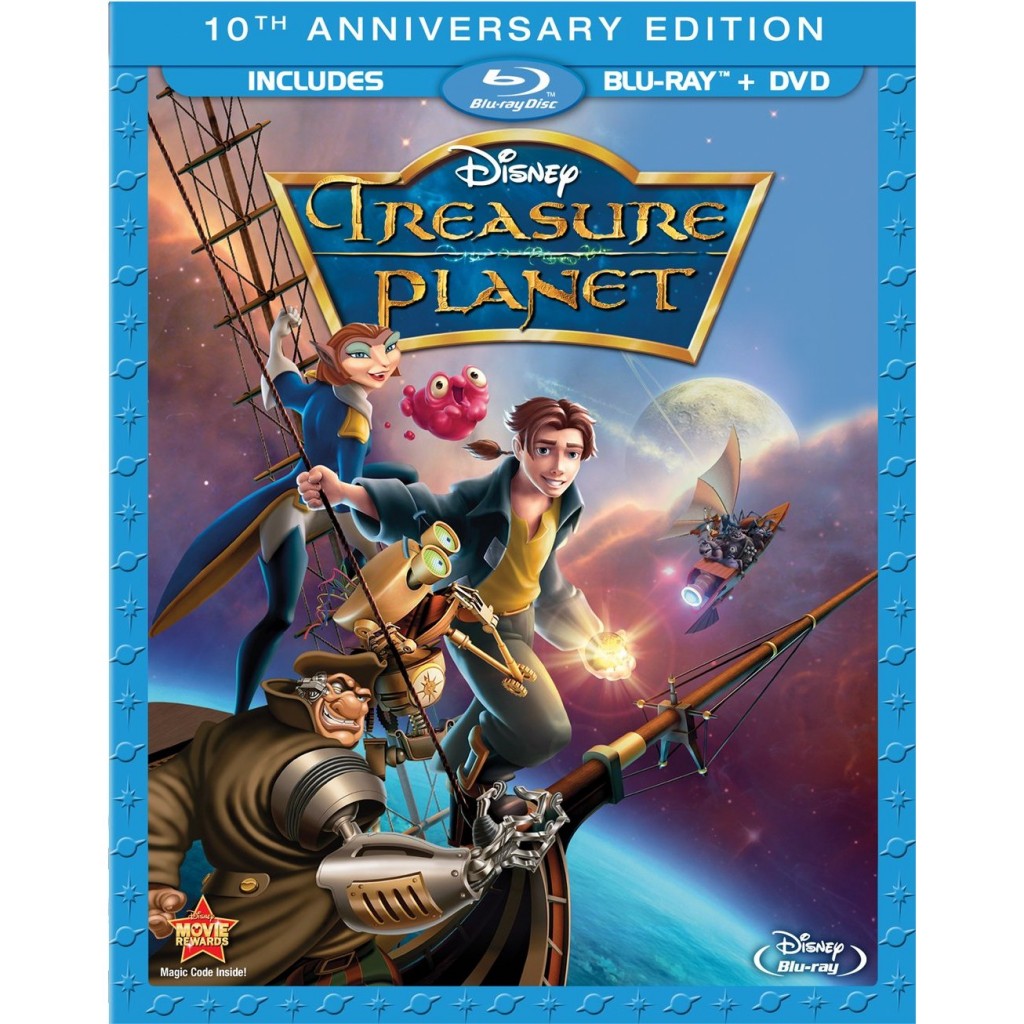 Treasure Planet was a flop at the box office, making less than $40 million in the United States despite a budget of over $140 million. Worldwide, it didn’t recoup that budget, let alone its marketing budget. Despite this, many claimed that it was a good film. It hasn’t developed anything close to a cult following, but it does have a legion of fans who view it as underrated.

I disagree with these folks. Treasure Planet is a dud, both commercially and substantively.

The film’s animation is its first issue, and is patently obvious as soon as you start viewing the film. This “groundbreaking” animation layered 2D hand drawn characters and other subjects on top of 3D computer animated backgrounds. This gives the film its own unique visual style, but this is not a good thing. To be sure, there are times when the results are beautiful, but far too often it’s distracting. Although it may have been done out of earnest ambition or a desire to innovate, it feels like a lame gimmick. In any case, both traditional animation and computer animation have been done better, and the style in Treasure Planet makes it already feel dated, like a feeble attempt at high tech film wizardry from the early 2000s. It’s similar to the special effects in 1980s films that now feel a bit cheesy.

The animation style isn’t the only place where the film feels dated. The score is largely wonderful, but the choice to use more upbeat and contemporary music in places gives the film a decidedly 2000s feel. Whereas modern day classics from the early 1990s used Elton John and other musicians’ timeless styles, Treasure Planet features pop music. Pop music is always destined to have a “period” feel to it, so it seems that from the outset, the film’s creators had no desire to produce something that would stand the test of time. This might be acceptable for another animation studio that is only aiming to dominate at the box office for a particular season, but not Disney animation. Disney animation should appeal to and resonate with future generations. Admittedly, I am holding Disney to a higher standard than other animation studios, but Disney has held itself to a higher standard in years past.

Beyond these qualms, the story is a passable modern day take on the classic Treasure Island, but I didn’t find it to be anything special. A good animated film connects with all audiences on different levels without pandering to kids. Treasure Planet panders, with an immature story and cheap jokes. Sure, it’s a unique and quirky take on Treasure Island, but I didn’t find it overly compelling. Given that the source material is one of the most revered stories of all-time, a “passable story” in this film is a disappointment.

On the plus side, Treasure Planet looks and sounds amazing. The animation pops with crisp contrast, deep blacks, and great rendering. The sound similarly pops, thanks to its 5.1 DTS-HD MA soundtrack, which includes a great mix with some deep LFE.

The extras are all the same as those found in the previous DVD release of Treasure Planet. There is nothing new for the Blu-ray, nor have any of the extras been ported in HD. They’re all in standard definition. Luckily, the DVD had a solid slate of extras, but if you already own the DVD, this is a bit disappointing. The audio commentary is particularly fascinating for its insight into the animation and ambition of the film.

Overall, I feel that Treasure Planet Blu-ray is a must-buy only for serious fans of the film who have great home theater set-ups or don’t already own the film on DVD. The audio and video are a substantial upgrade from the DVD, so if you’re a fan of the film, these alone can justify the purchase. If you don’t own the DVD but are a fan of the film, you should also make the upgrade. Everyone else…either rent it if you haven’t seen it or skip it completely. The film itself is not the “gem” that some claim it to be, and I suspect that this is not a film that will age well. Even after 10 years, it’s already showing its age.

Buy this Blu-ray/DVD on Amazon by clicking here. Have you seen Treasure Planet? Share your thoughts about it in the comments!