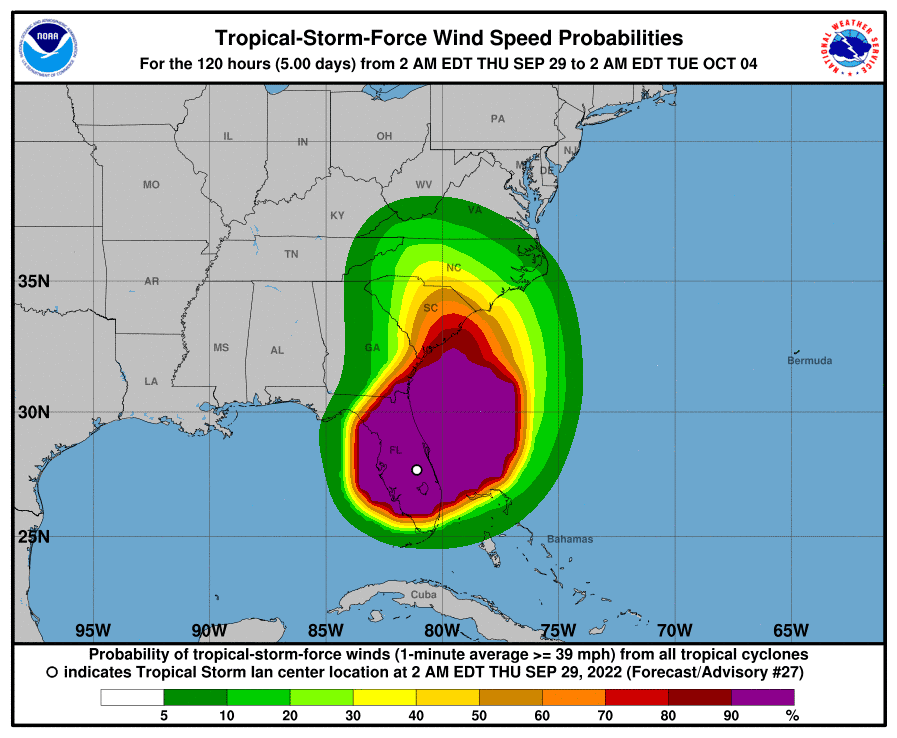 Hurricane Ian made landfall in Florida as a Category 4 system, nearly reaching Category 5 intensity. As the storm moved across the state towards Central Florida and Walt Disney World, it lost strength as expected, and was downgraded to Tropical Storm Ian on Thursday morning. Ian dropped record rain around Orlando and has brought “catastrophic flooding” across Florida, along with devastating winds. In this, we’ll update you on the Ian’s status and aftermath.

Walt Disney World and other Central Florida attractions have announced closure updates following the storm, as covered in Walt Disney World Closed Due to Hurricane Ian. That was updated this morning, and contains new information and details as of September 29, 2022 at 11 am EST.

The National Hurricane Center updates its Ian Advisory every few hours, with new information about the storm’s winds, projected path, and more. Let’s start with the latest of these, issued across multiple advisories this morning by the NHC: 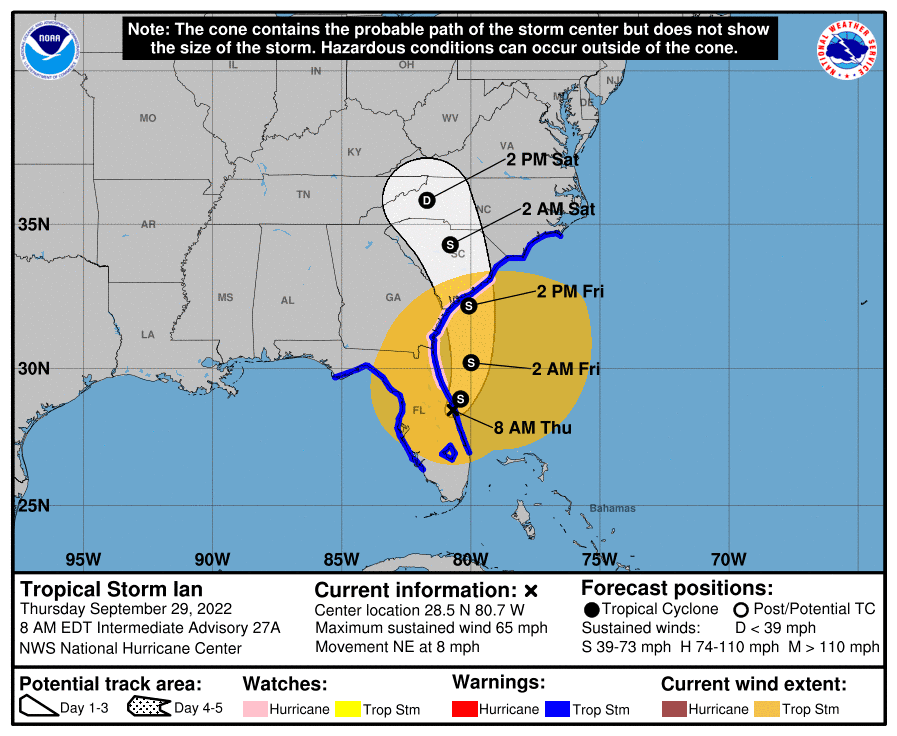 In the National Hurricane Center’s 8 a.m. update, the system’s center was located in Brevard County, having passed through Walt Disney World. Ian is now over 40 miles east of Orlando moving toward Cape Canaveral at 8 mph with 65 mph sustained winds and higher gusts.

Ian’s center continues to move northeastward across central Florida, and nearly all of the heavy rains are located to the north over northeastern Florida. Velocities from the Melbourne and Tampa radars have decreased significantly since last evening, and based on that data, Ian is now a tropical storm with maximum sustained winds of 55 kt.

After that, models are suggesting that Ian could strengthen again as it moves over the waters of the Gulf Stream. As a result, Ian could be near hurricane intensity again when approaching the coast of South Carolina. After moving inland, Ian is expected to weaken quickly and dissipate or become absorbed by another broader area of low pressure.

Back in Florida, rain totals exceeding 20 inches were forecast across parts of the peninsula. There have been reports of 12-16 inches in Orange County, and some areas might approach 30 inches in other areas of Florida. As a result, much of Central Florida remains under flash flood warnings, which means imminent flooding. Other areas are under a flash flood emergency, which asks people to seek higher ground immediately.

Orange County Government’s Office of Emergency Management has indicated residents should continue sheltering in place. Many roads in and around Orange County are flooded, including major highways. 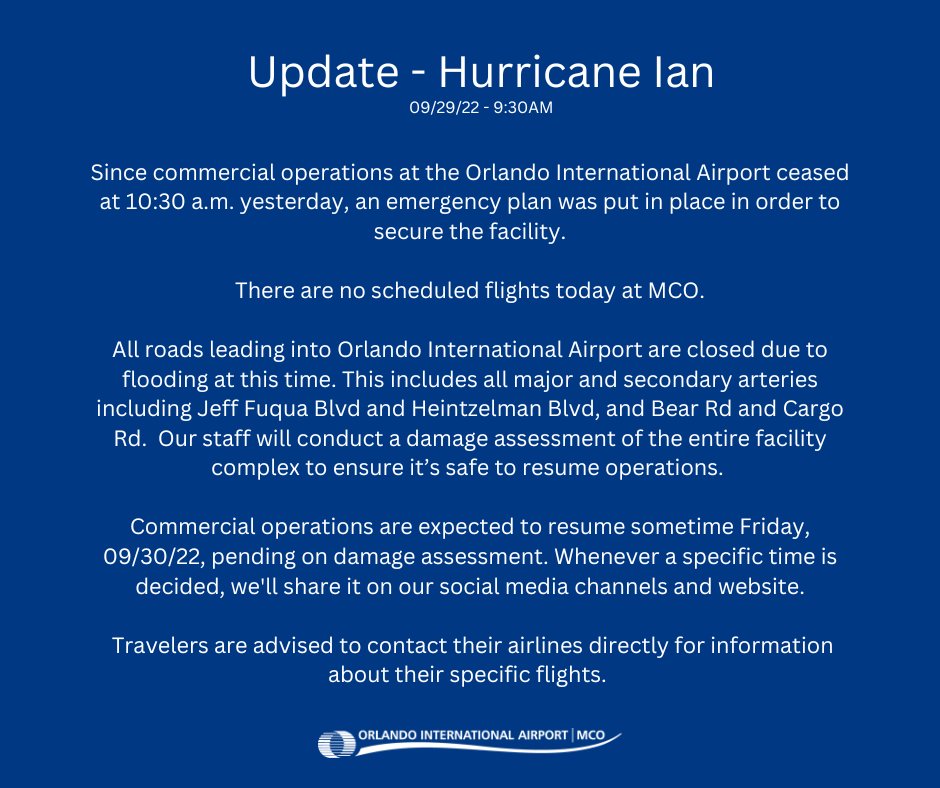 Orlando International Airport reported that all roads leading into MCO are closed due to flooding. As a result, commercial flight operations are still halted for today, and a damage assessment will take place throughout the airport and facilities.

The circumstances seem similar throughout Central Florida. Below is I-4 as of this morning:

While it’s too early for a definitive announcement from Walt Disney World, Universal Orlando, or other area attractions, don’t be surprised if the theme parks don’t all reopen tomorrow.

Cleanup cannot begin until flooding subsides and it’s safe for those Cast Members to leave their homes. Damage will need to be assessed, then work will start. One possibility that wouldn’t surprise us is if one or two parks have a delayed opening tomorrow, while others remain closed until the weekend. We have more on that in the ‘Walt Disney World is Closing Due to Ian’ post.

Florida Governor Ron DeSantis held an early morning press conference on Thursday from the state Emergency Operations Center in Tallahassee during which he addressed the aftermath of Ian. He described the storm as a “500-year flood event” and indicated that it’s still a “hazardous situation.”

“The impacts of this storm are historic and the damage that has been done is historic,” DeSantis added. “We’ve never seen a flood event like this, we’ve never seen a storm surge of this magnitude.”

Extensive flooding in our area remains a serious situation for Kissimmee residents. Shelter in place as first responders continue rescue operations. If you have an emergency, call 9-1-1. pic.twitter.com/RGn0HWzCj0

Over 2.6 million people are without power across Florida, but the exact number is not known.

In his press conference, DeSantis noted these are all initial assessments. “There’s going to be a lot more assessing that goes on in the days ahead,” DeSantis indicated. “There’s a lot of people in low-lying areas and there’s going to end up being extensive damage to a lot of people’s homes,” he said. DeSantis also stated that some counties are “basically off the grid” due to damage, and some bridges and other infrastructure will be in need of repair, inspection, and recertification before they become passable again.

This WAS the entrance to the Double Tree by Hilton hotel at Universal Studios.

And those cars across Major Blvd used to be working cars. Likely not anymore. @MyNews13 #HurricaneIan#flooding pic.twitter.com/CpoHyAqeQD

Ian made landfall on Wednesday afternoon as a massive Category 4 hurricane. The system pummeled the coast with near Category 5 sustained winds of 155 mph with higher gusts most of Wednesday. Ian only dropping speed as it crawled inland, moving northeast through the state overnight. At 2 am, Ian was still a Category 1 hurricane with 75 mph winds.

Ian followed a path similar to 2004′s Hurricane Charley, which also moved from the east coast into Central Florida. The key distinction was that Ian was of a more massive size, dumping record rain across Florida as it slowly trudged its way across the state.

In his press conference, Governor DeSantis addressed this, saying he thanked Biden and that the president had offered more support. DeSantis indicated that more would be needed, as there was significant damage to the center part of Florida and that he’d be asking for those counties to be included in the declaration.

Emergency evacuations under way at Avante at Orlando pic.twitter.com/79Quf0KmOq

According to DeSantis, the president’s initial declaration makes Federal funding available to affected individuals in those 9 counties. “Assistance can include grants for temporary housing and home repairs, low-cost loans to cover uninsured property losses, and other programs to help individuals and business owners recover from the effects of the disaster,” reads part of the declaration.

“For a period of 30 days from the start of the incident period, assistance for debris removal and emergency protective measures, including direct Federal assistance, is authorized at 100 percent of the total eligible costs.” During his presser, DeSantis advised that residents who will need disaster relief should extensively document water levels and damage, as photos will help make the process go smoother and faster.

⚠️Lake Eola in downtown #Orlando completely flooded over onto the streets.

If you are anywhere in Florida, we hope you stayed safe and are emerging from Ian today with minimal damage to your homes. If you’re at Walt Disney World, remember to be kind and extend some grace to Cast Members and other guests. As a reminder, many people staying at the resorts are seeking shelter from coastal areas where Hurricane Ian made landfall as a major Category 4 system, and are likely on edge about their homes, friends and family.

Some Cast Members are Florida transplants and, given the amount of time that has passed since the last major system, this is probably the first major hurricane they’re experiencing since moving to Florida. Many of those Cast Members are also College Program or International Program participants, living alone away from home for the first time in their lives. I cannot imagine how terrifying this is for them and their families. In short, everyone is doing the best they can, which is worth keeping in mind when interacting with others–courtesy and kindness go a long way. Here’s hoping this passes quickly and with minimal damage and harm, and Walt Disney World can resume normal operations tomorrow. However, with the level of flooding and damage, we’re skeptical that will happen with all four parks. We’ll keep you posted, though.

If you’re currently in Florida, what was your experience with flooding, winds, and damage? Have you been in Walt Disney World or Florida during past hurricanes? Any additional info, thoughts, or first-hand experiences to share about hurricanes at Walt Disney World? Any questions we can help you answer? Hearing your feedback–even when you disagree with us–is both interesting to us and helpful to other readers, so please share your thoughts below in the comments!