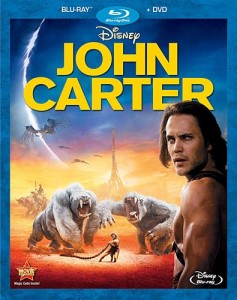 Disney’s John Carter (of Mars) is coming to Blu-ray on June 5, 2012, and in celebration of the release of this very underrated film, we’re giving away a copy to one lucky reader of DisneyTouristBlog.com, courtesy of Disney! If you don’t like free things, you can always pre-order a copy of John Carter on Blu-ray and DVD–and you should if you don’t win, because this film is awesome. You can read more about that in our review.

The lucky winner will receive the John Carter Combo Pack, which includes the movie on both Blu-ray and DVD. If you read my review, you know I’m really high on this film. I recently even picked up a copy of the awesome (but now out of print and insanely expensive) Art of John Carter book from the local library. I actually preferred John Carter to the Avengers (Sarah preferred the Avengers, but loved both)! That’s how much I love this film. You can read more of my gushing in my review. For now, more about the contest…

Enter our “Royalty of Mars” contest to become the Princess* or Prince* of Mars! You can enter through Facebook, Twitter, subscribing to our newsletter, and/or by commenting on this blog post! Enter multiple times through multiple methods to increase your odds of winning! Contest ends at midnight on June 8, 2012!

To get you excited for the release, here’s a trailer!

*Note, Princess or Prince of Mars status determined by future ownership of John Carter Blu-ray/DVD title. Airfare to Mars to claim rightful throne not included. Awesome pet Woola not included. Royalty of Mars status void where prohibited by law. Those with awesome face-tattoos encouraged to apply.