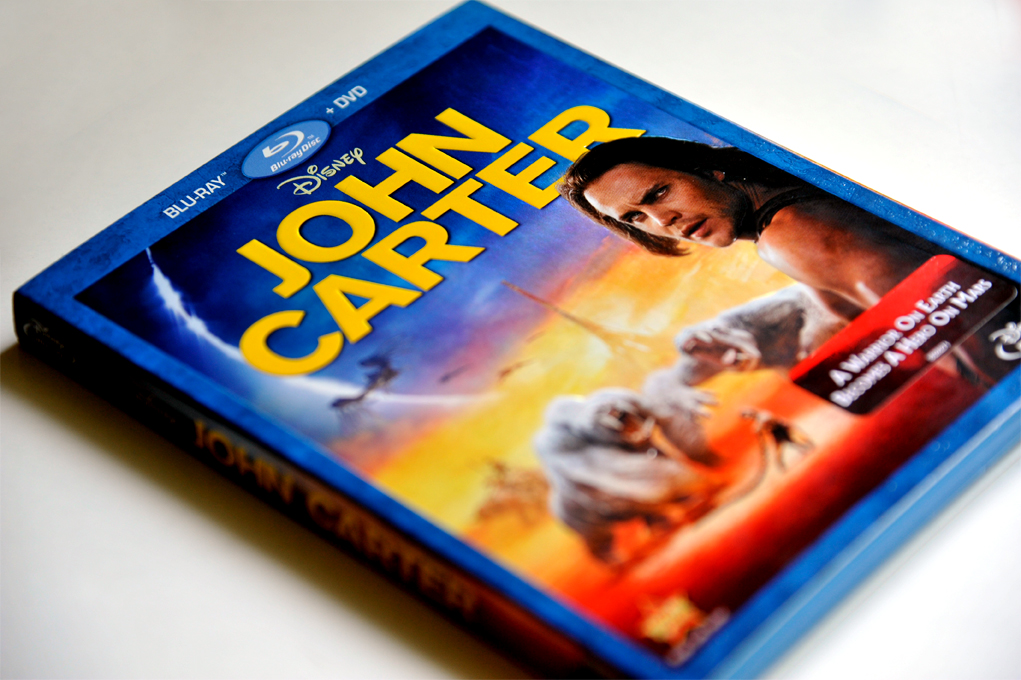 “I just want a period film about a period I don’t know anything about. I want it to feel like we’ve just done our martian history research really, really well.” Director Andrew Stanton made this comment in the audio commentary to the John Carter Blu-ray, and it perfectly sums up why John Carter succeeds for me. It’s an epic period film rife with layers of rich detail that sticks with an astute viewer, and really takes a few viewings to fully absorb. Throughout the commentary, Stanton and the films producers harp on the burden borne by the visuals in John Carter, and for me, they completely hit the nail on the head. The story and character development in John Carter are very enjoyable, and with that essential foundation laid, the visual depth (and I don’t mean visual effects) then takes the film to the next level.

I’m not going to waste keystrokes on the plot of John Carter. You can read about that on Wikipedia or the thousands of other articles that have preceded this. You also probably know that John Carter has been deemed a flop, and that many scratched their heads over its bizarre marketing. If not, 5 minutes on Google might be in order to gain some frame of reference for how John Carter has been received by critics and the public. Since John Carter is such a divisive film, I’d rather focus my energy on why John Carter is actually an amazing film that deserves so much more attention than it received.

As mentioned above, John Carter has been divisive. It has drawn comparisons to Avatar, the Star Wars prequels, Gladiator, and a few other mediocre contemporary films. Because of this, critics have dismissed it as being unoriginal. The response to this has been that John Carter’s 100-year old source material (pulp novels by Edgar Rice Burroughs) actually inspired all those films, so John Carter was not actually inspired by those films, but rather, they were inspired by it. To be honest, I don’t really buy that line of reasoning advanced by John Carter fans. Comparing films-to-films, all of those titles preceded this. If your goal as a filmmaker is to do something no one has ever done before, you don’t choose to base your film on source material that has since been borrowed from by many other films (and I’m not implying that was Stanton’s goal). That said, if you’re making a John Carter film, in order to be faithful to the source material, you have to include certain cornerstone scenes that may now be viewed as cliche to the genre because they’ve been borrowed from the novels so many times.

I think the more legitimate response to the “unoriginal” criticism is that, even when viewing it against those films to which it has been compared, John Carter is far from unoriginal. It actually puzzles me that John Carter has been labeled as unoriginal. Science fiction films seem much more susceptible to this type of criticism than, say, dramas, as any science fiction film invariably seems to draw comparisons to Star Wars and other films in the pantheon of sci fi classics. To me, this seems not only unfair, but inaccurate. Many dramas follow similar story arcs and storytelling devices, yet they do not receive the same criticism for being unoriginal. Perhaps this is because science fiction is not as mainstream or ‘normal’ of a genre as drama. I think there’s an unfair prejudice and stigma towards science fiction. (As if “normal” fiction is always so firmly rooted in reality!) I really don’t know how else to explain why science fiction is so easily dismissed as unoriginal whereas dramas (and other genres) are not.

In any case, if critics are desirous of drawing comparisons between John Carter and other films, the much more apt comparisons, to me, are to Lawrence of Arabia, Barry Lyndon, and a few different Akira Kurosawa films. Even those are loose comparisons at best. Once you get past the desire to make ill-conceived comparisons, what you have is a griping story filled with memorable and captivating supporting characters, fully developed main characters, and plenty of personality and humanity to give life to an incredibly vivid epic landscape of Mars. There is a sense of realness to the characters that allows the surprisingly character-driven John Carter to excel. It’s not perfect–the pacing to me seemed a tad off towards the end, it could have benefited from a bit more in the way of a preface, and I actually felt it was a bit short (although how often does Hollywood make 3-hour epics today?!)–but it’s a great film especially by current standards.

This is just from the perspective of story. Then there’s the art. Oh, the art. I could fixate on this for so long. From the makeup and tattoos to the sets and architecture to the visual effects that are so realistic that they never (except perhaps during once flying sequence) pull you out of the reality of Mars that the John Carter team has created. The detailed art goes beyond what can be found in most science fiction, but is most impressive because here (as opposed to many films in the genre) the visual qualities of the film don’t function as a crutch for other substantive shortcomings.

Beyond all of this, which makes for an incredibly well-done ‘film as an art form’ experience, the film is just flat out fun. And for the right reasons. It’s not a simple, check-your-mind-at-the-door popcorn flick. It doesn’t have gratuitous action scenes (thankfully Andrew Stanton did not go to the Michael Bay school of live action filmmaking) and even the secondary characters aren’t there for just quick chuckles or amusement (although after seeing the film, who on earth is still satisfied with their dog?!). It’s fun, but it’s not fun merely for the sake of being fun, if that makes any sense. It’s difficult to articulate, but John Carter works almost in a similar way that Pixar films work. Kids can enjoy it because it on a superficial level, it is a fun movie. On another level, adults can enjoy it due to its nuances and complexity.

I am convinced that John Carter has all of the elements of a cult classic. The people who ‘got it’ really got it, and I suspect many people will latch onto the details in the film and these details will keep John Carter in their consciousness for years to come. This type of detail is what makes films truly resonate with people, and what makes people obsess over certain films. John Carter will have a legion of rabid fans. In addition to that, it has a timeless feel that will allow it to age better than, say, Tron. I wouldn’t be surprised if in two decades, John Carter still has legs, and we see a sequel. Perhaps that’s wishful thinking on my part, but I truly believe that Disney has a very viable franchise on its hands–even despite numbers that suggest otherwise.

I think that pretty clearly indicates where I stand on John Carter. I will spare you further rambling. If you’ve already seen the film, you probably didn’t need all of that gushing. You’re probably wondering about John Carter as a video release. Well, it’s also exceptional. 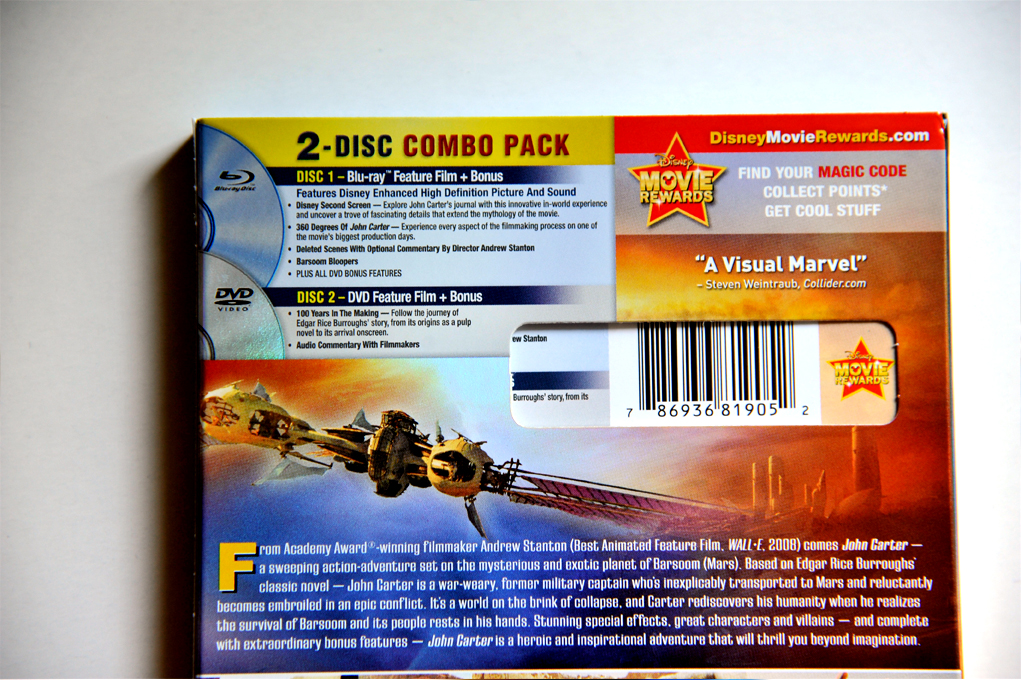 I normally split these up and give them each a little attention, but since I focused on the film so much and since both are flawless, I’m just going to leave it at that. Blacks are rich, contrast is great, and the DTS audio is wall-pounding. There are literally no imperfections, artifacts, or banding. John Carter fires on all cylinders with perfect audio-visual presentation. This is a “show off the power of your system” Blu-ray title.

If you’re a John Carter fan, you’re in luck. The extras here are all excellent.

Audio Commentary: Director Andrew Stanton and producers Jim Morris and Lindsey Collins discuss the film in this passionate audio commentary. Rather than phoning it in, as happens in many audio commentaries, these three discuss with great excitement how the project initially materialized and how it ultimately came to fruition. I’m curious as to when this was recorded, as they discuss (on multiple occasions) the intent for sequels. They don’t explicitly say that they still expect sequels, but that seems to be the case. They also share a lot of technical details and give insight into some areas of the film that might otherwise go overlooked.

Disney Second Screen: This was not yet available to download when I reviewed the Blu-ray (at least not that I could find!). Based on past experience, I suspect this will be a very worthy extra well worth the large size of the download.

Deleted Scenes: These are well-worth watching. The alternate opening, I think, would have made a good addition to the film to give a little prefatory information. Also amusing are the scenes featuring varying degrees of completedness; it’s cool to see head-gear wearing Tharks riding around on ATV Thoats.

100 Years in the Making: This short featurette examines Edgar Rice Burroughs’ life, how he originally was ashamed of doing writing pulp fiction (thus the use of a pen name for the first title). This feature is relatively short (around 14 minutes); for fans of the pulp fiction, it might be a little short, but I felt it was about perfect in duration for my interest.

360 Degrees of John Carter: This is the film’s ‘making of’ feature, which is presented as a day-in-the-shoot production diary. Seeing the make-up and green-screen sets makes this very interesting, and the feature also gives insight into Stanton’s transition from Pixar to live action.

Barsoom Bloopers: A nice mix of real bloopers and some scripted fun dancing towards the end. Worth the 2 minutes of your time.

Overall, I feel that John Carter is a must-buy Blu-ray. Yes, it has been a divisive film, but I believe that this is because some people have approached it without an open mind. Even if you disagree with me regarding the subtleties and nuances of the film, at absolute worst it’s a fun movie you can pop in when you want to relax and be treated to an audio and visual masterpiece. Now, I think John Carter is far more than that, but it’s at least that.

Buy the John Carter Blu-ray/DVD on Amazon by clicking here. Have you seen John Carter? Share your thoughts about it in the comments!