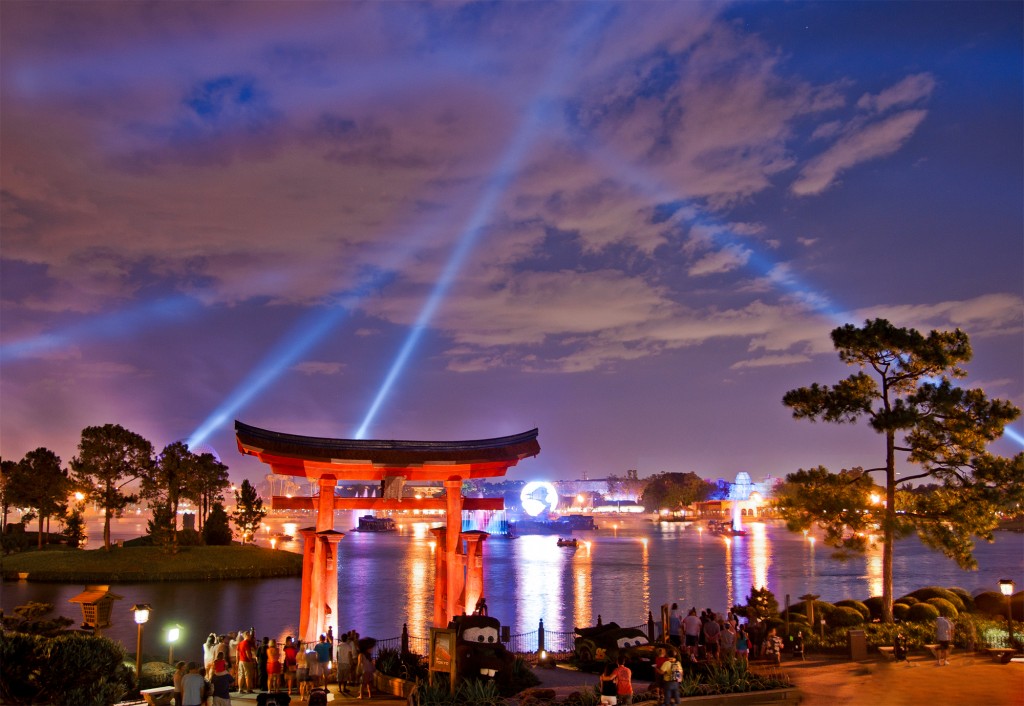 Illuminations is my favorite nighttime show at Walt Disney World by a colossal margin. To me, it transcends the normal Disney label of “fireworks spectacular” as it is so much more. In fact, when discussing “Remember… Dreams Come True” last year, I carefully reclassified Illuminations: Reflections of Earth as a “Sensory Tribute to Humanity” rather than a “Fireworks Spectacular” in order to avoid having to determine which show I like more. Although half in jest at the time to avoid making a tough decision, the more I think about it, the more I realize that’s truly how I feel. Illuminations is so, so much more than fireworks (for me, the fireworks are one of the least important aspects of the show) and when looking at this photo, I realize that my favorite portions of the show don’t even feature fireworks.

I love when the lights outline each pavilion (except Morocco), and I love this scene that follows with the searchlights all meeting in the center of the World Showcase lagoon. The music and the meaning of the show hit their high points during these portions of the show, and nary a fireworks burst explodes. I can honestly say I’d enjoy the show just as much if it didn’t have a single fireworks burst during the entire show. Now, I now the general public would disagree, but I think that’s how powerful Illuminations is–it excels even without the pretty explosions. While “Remember… Dreams Come True” would also be fun without the fireworks, so much of the beauty of the show is tied to the fireworks that match the music. It wouldn’t be nearly as special without the fireworks.

I’m sure some of you are wondering ‘where are the fireworks?’ in this photo from a fireworks show, but to me this photo is better without the fireworks. It takes me right back to that chills-inducing time in Illuminations when these lights collide. I am even humming the score aloud as I type this…