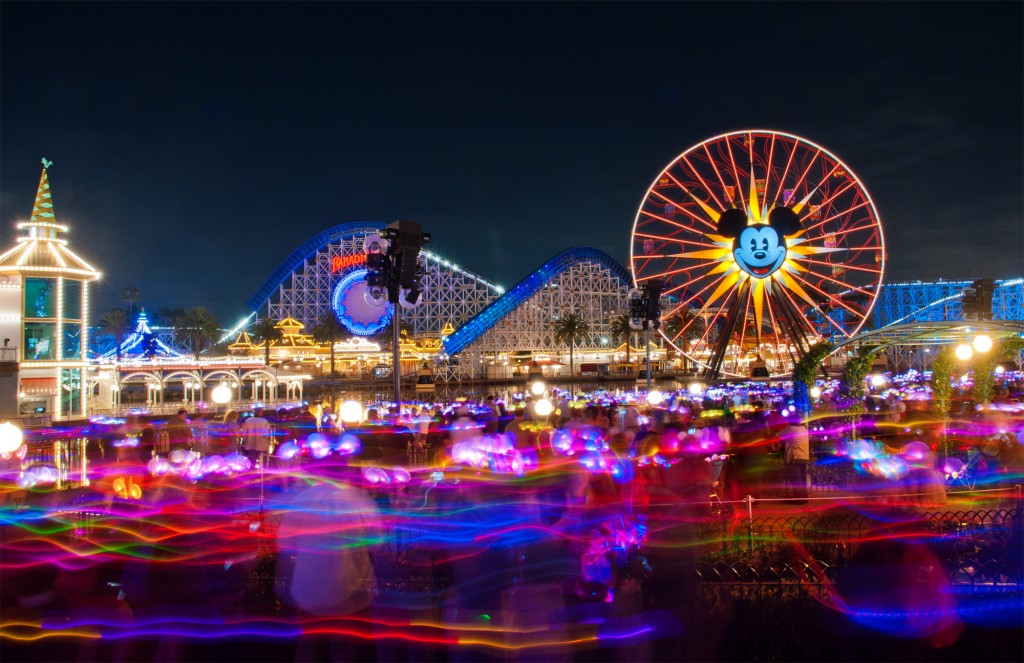 We experienced World of Color “Glow with the Show” during its premiere on June 14, 2012 at Disney California Adventure, and we were absolutely stunned by what the interactive light-up Mickey Mouse ears added to World of Color. I had a strong suspicion that “Glow with the Show” would debut that night, and had already mentally planned on how I would photograph the show. Unfortunately, the plans I had crafted in my head didn’t mesh with the realities of the viewing area, which I quickly discovered when I got to the spot I wanted. After that, I rushed to the bridge by Paradise Pier for an alternate view, but the ‘front row’ there was full. So then I settled for this spot, which didn’t end up being half bad. I captured this long exposure as guests entered the Paradise Bay viewing area while wearing their hats.

Initially, I wasn’t all that excited for “Glow with the Show.” I figured it was created mostly for merchandising, and while that may be the case, the beauty, richness, and color all of those ear hats add to the show is undeniable. It definitely upped the “wow” factor of World of Color, especially with everyone in the audience wearing a pair. It was so cool seeing the waves of color flow through the crowd and interact with what was happening in World of Color. I really hope “Glow with the Show” catches on (the effect is definitely dependent upon many/most guests wearing the ears) and is introduced to other attractions and experiences. Many guests might balk at the $25 price of the hats, especially when they, themselves, don’t benefit from the visual effect of wearing the ears. Here’s hoping that the upcoming AP previews “seed” enough of the ear hats that other guests see them and are convinced that they’re worth the money!