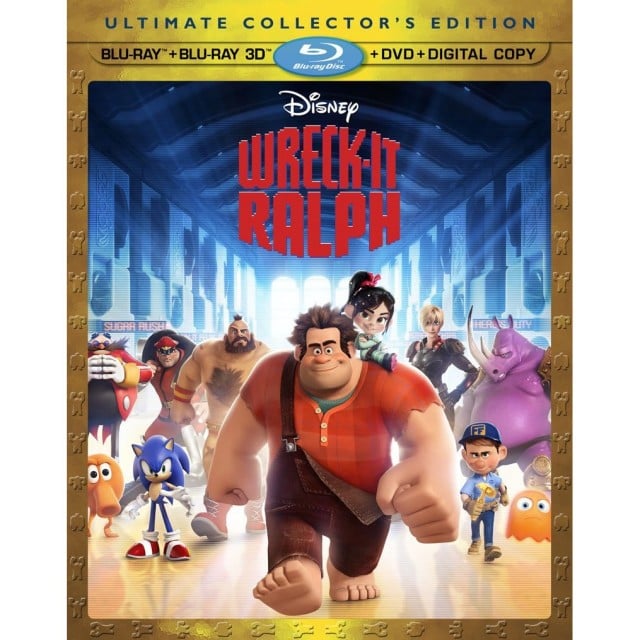 Sometimes, Disney releases formulaic movies and sequels to those movies that it have a lot of blockbuster potential, but not much originality or artistic merit. Sometimes, like in the case of Wall*E, Disney pushes the envelope and reminds everyone why it’s an entertainment juggernaut. Wreck-It Ralph is unquestionably the latter. Easily the best animated film of 2012 (and it would have won the Oscar in the category were Pixar’s name not attached to Brave), Wreck-It Ralph is a masterpiece. A love letter to the golden age of gaming, Wreck-It Ralph combines Easter Eggs, cameos, and engaging characters in a story that is original and fresh. The crowning achievement in a string of recent releases that have included the underrated Bolt, Princess and the Frog, and Tangled, Wreck-It Ralph proves that the Walt Disney Animation Studios is back, and able to match or exceed Pixar in terms of quality.

Audio and video are both absolutely flawless. I only watched the standard Blu-ray, but it was beyond spectacular in terms of video quality. Blacks are deep, colors pop, and clarity is exceptional. If you walk into a store today, don’t be surprised to see Wreck-It Ralph playing on all of the TVs to help sell HDTVs, Blu-ray players, and home theater systems.

The sound matches the quality of the audio, with a surprisingly rousing DTS-HD Master Audio 7.1 surround track. There’s a lot of bass during the more “intense” (relatively speaking) moments of the film, and the pop soundtrack sounds great throughout. Overall, it’s very immersive, and there is a lot of activity across all channels throughout the film. I don’t recall audio being this dynamic at the theater, but this is really a great movie for audio.

The extras are where the wheels fall off of the Sugar Rush racers car, so to speak. With the exception of the excellent Paperman short, the Wreck-It Ralph extras are a serious letdown. The only things of substance besides this are a short making-of and the intermission scenes.

C’mon Disney. You put together an incredible film that likely required a lot of collaboration with third parties about a topic in which many people have an independent interest, and this is all you could muster?!?! Where is the commentary? Where is the hour-plus long documentary describing the licensing of characters for the film?? (I’ve read several interesting interviews on this topic, so I know there are interesting stories!) Where’s the concept art??? Where’s Second Screen????

I’m not unreasonable. I’d settle for just two of these four no-brainer extras. Unfortunately, we got zero. This is really, really disappointing given that this is a film perfectly positioned to have oodles of extras given its subject, but instead we get (basically) nothing.

No matter, Wreck-It Ralph is still a must-own film for anyone who grew up on video games or loves Disney animation. Everyone else should probably just rent it and/or wait for a more definitive release. The movie itself, and the audio and video quality make it a purchase worth making for fans, but the egregiousness of not including quality extras will not soon be forgotten.