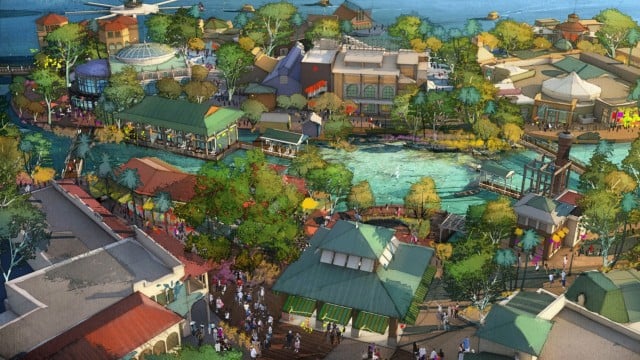 Disney Springs is the redevelopment of Downtown Disney at Walt Disney World, announced March 14, 2013 and set to complete construction in 2016, but open in phases prior to that. It is a shopping district concept that is intended to revitalize Downtown Disney and replace the disjointed Westside and Pleasure Island with a single, cohesive concept, separated into four areas: Town Square, Landing, Marketplace, and Westside. Construction begins April 2013.

Once complete, Disney Springs will have over 150 establishments (double Downtown Disney’s current number of approximately 75). The redevelopment is designed to evoke the feeling of turn of the century Florida, and Disney Parks & Resorts Chairman Tom Staggs focused heavily on the redesign being a place for families. No announcements have been made concerning the shops, restaurants, and entertainment that will operate at Disney Springs, but speculation is rampant based upon previously leaked plans and a presentation containing the names of numerous third parties, as well as a few Disney-operated restaurants.

The facts of the announcement are covered here and the leaked plans are available here, so we’ll spare you that regurgitated info. Instead, we’ll share our reaction to the news… 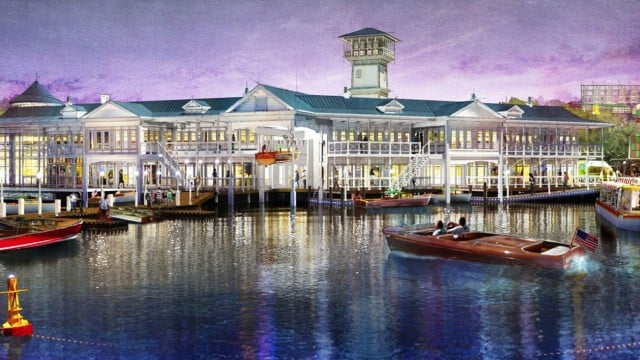 The failed and aborted plans for Downtown Disney (Hyperion Wharf, anyone?) have been so numerous that it’s difficult to think much of this until we start seeing vertical construction. However, here things do seem a bit different, as more details are known about designers, construction companies, and even tenants that have signed on. Plus, a little speculation is always fun, so we might as well have at it…

Downtown Disney is in such poor shape that just about anything would be an improvement upon the status quo. If a Chuck-E-Cheese were to open up shop tomorrow, I think it’d be tough to argue with that as an improvement over the current situation. However, that’s relatively speaking to the present. If you examine this development relative to August 2008, I don’t think it’s quite as easy to call it an improvement.

Of course, that calls for a comparison to Downtown Disney during a time when Pleasure Island was still operational. Now, I will be the first to admit that a lot of these clubs weren’t in the best of shape and suffered from slumping attendance. Even our beloved Adventurers Club wasn’t always a huge draw with tourists (most nights we visited it had a large number of annoying “regulars” who wowed crowds by reciting the jokes before the performers could make them (not to lump all regulars together, as I’m sure most weren’t this obnoxious)). Still, from our perspective, Downtown Disney was a significantly better experience with Pleasure Island, which was one of the few forms of nightlife on property.

With that said, it has been over 4 years, and clearly Pleasure Island isn’t coming back (Disney’s fixation on things that the will appeal to the family-set is confirmation enough of this), so it’s time to move on.

When judged objectively, and not relative to what’s there now or what was once there, Disney Springs seems like an addition with potential. Nothing spectacular if it just becomes a generic mall, but conceptually decent looking and strong if some solid original concepts are added to the mix. At its core, the design looks like a high end outdoor shopping mall complex like one you’d find in well-off area of Southern California.

Personally, I’m not going to get excited about a shopping mall with third party vendors, no matter where it’s located and how ritzy it is, if that’s all it ends up being, I’ll see it as an adequate fix to an area that has been in poor shape for the last several years, but probably won’t give it a second thought, and will be just as unlikely to visit as we were Downtown Disney, which we haven’t stepped foot in since 2008. 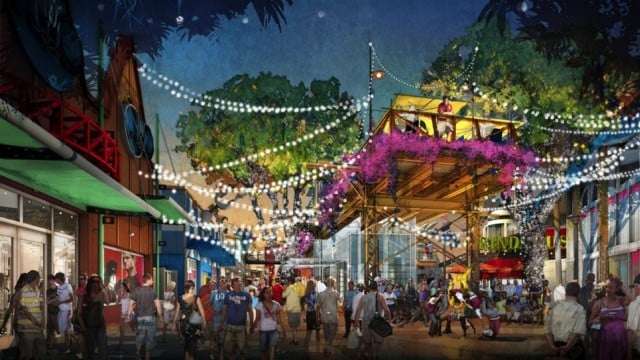 However, it could end up being a lot more than this, and part of me is excited over this potential. The excitement is primarily over the possibility that a Walt Disney World version of Trader Sam’s will be included in Disney Springs. For those unfamiliar with Trader Sam’s, it’s a tiki bar at Disneyland Hotel (in Disneyland Resort). In my Trader Sam’s review, I called it “one of the greatest things Disney has built in years.” Obviously, since no occupants have been officially announced for Disney Springs, Trader Sam’s opening in Disney Springs is only informed speculation, and it may not even end up in the final plans.

Trader Sam’s, or another unique Disney concept for Disney Springs, is what it will take to get us back to Downtown Disney. Without these unique places, it’s essentially just another mall to us, and we can visit nice malls in any number of cities (surprisingly, even in Indianapolis we have nice malls!). We’re not interested in chain mall-restaurants, and the current occupants of Downtown Disney don’t really excite us.

That’s our personal opinion of Downtown Disney and this concept, and how it appeals to us. We realize that Downtown Disney is a huge draw for the shopping, and this new development will be popular among locals, for whom it will be a great mall to have nearby, and international tourists, who love visiting malls when they come to the states. Disney Springs fills a “need” at Walt Disney World, and gives some guests a reason to stay on-site when they otherwise might have gone to another mall.

For us, without the presence of unique draws, it will be just another mall. Although I don’t begrudge Disney for building things that will appeal to some of its guests, the number of things justified in recent years as being pragmatic additions solely because they will “appeal to guests” is way too high. Yeah, timeshares appeal to guests and make money. McMansions also appeal to the general public. So do malls. However, these things lack the creative capital and ambition found in so much of what was built at Walt Disney World from the time it opened until the mid-1990s. These are the things that made Walt Disney World a special place. Timeshares, McMansions, and malls do not make Walt Disney World a special place (and we say that as DVC members who happen to like the club). In those days, Disney built things that guests hadn’t seen before but would come to love, not things that were safe bets because they are ordinarily profitable for those who build them. I’ve heard Wal-Mart is also a pretty lucrative business…perhaps Walt Disney World should invite one to be built on property?

Regardless of what gets built, it will be better than what’s there now. But is that enough? Shouldn’t the bar be a little higher than set so low that you trip over it no matter what? Here’s hoping Disney is ambitious with Disney Springs, and brings in several unique concepts designed in-house to sit alongside the third party retailers. I’d love nothing more than for this redevelopment to be so good that it makes me forget all about Pleasure Island.

What do you think of the Disney Springs concept? Excited to see Downtown Disney potentially receiving a makeover, or indifferent to the expansion? Share your thoughts in the comments.