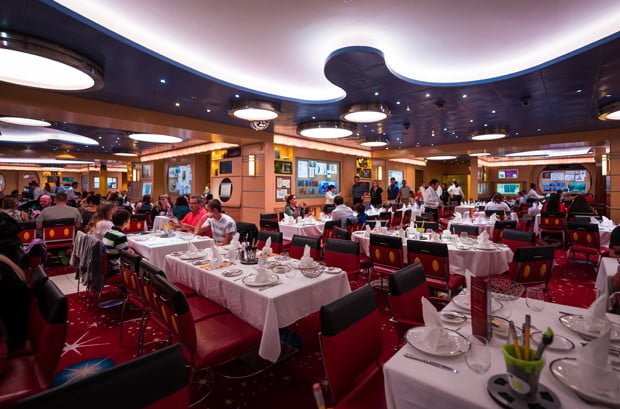 Before we get to the substance of the meal itself, I want to comment on our fabulous servers. They were beyond excellent for the duration of the cruise, offering some of the best service we’ve ever had at any Disney restaurants, anywhere. It was “some of” rather than the absolute best service because we’ve had similarly exceptional service on Disney Cruise Line restaurants before.

In fact, our encounters with Cast Members aboard Disney Cruise Line have been resoundingly positive. Disney fans often debate whether Disneyland or Walt Disney World Cast Members are better, and my position has always been that the difference is negligible, and any perceived difference is largely based upon anecdotal, individual encounters.

I don’t think that’s the case when you add Disney Cruise Line to the mix. In my estimation, it offers by far the best service of Disney’s domestic offerings. I have a number of working theories as to why this is the case, but chief among them is the crew-guest dynamic. As large as the ships are, guests and crew see the same faces a lot more, meaning there’s a greater likelihood of a loose bond being formed (bond is probably too strong of a word, but I think you get the idea).

Along those same lines, and probably more importantly, I’d assume guests are far more respectful on Disney Cruise Line than in the parks. Touring the parks is a stressful experience for many guests (not that this is an excuse for poor behavior), which precipitates meltdowns over things like FastPass return times, restaurants not having availability, etc. As patient as many in-park Cast Members can be despite being verbally abused by guests, that must invariably take a toll on them.

I’m not saying Disney Cruise Line Cast Members have it “easier” (their job no doubt entails stress caused by being away from family–among other things), but I suspect the guest-induced stress is far lower. That likely leads to a more positive view of guests and, consequently, higher caliber of service. Even if this theory is totally wrong (it’s likely numerous factors), I think the superior service aboard Disney Cruise Line is clear. 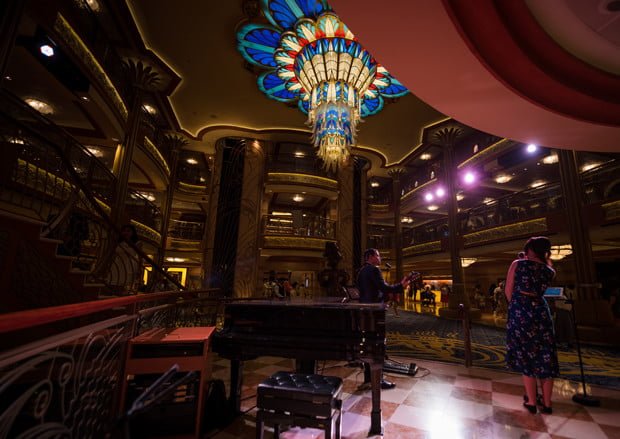 For me, the service is one of several ways Disney Cruise Line is like ‘vintage’ Walt Disney World. The ships are impeccably maintained (waking up early for sunrise is worth it even on an overcast day, as you can see this meticulous upkeep in action), the dining options are top notch, and you get the whole experience is wonderfully presented.

I think at least part of this has to do with scale. Walt Disney World is churning through tens of thousands of guests per day, many of whom have never visited before and will never visit again. By contrast, Disney Cruise Line is a smaller operation, and feels relatively ‘tight knit.’ Maybe that’s just me–I don’t know. 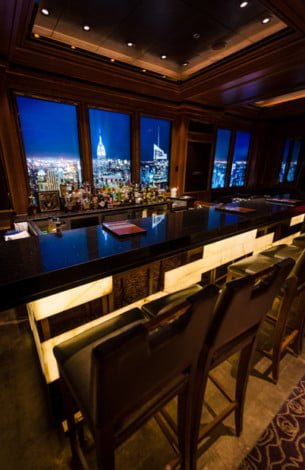 None of this is to say I don’t enjoy Walt Disney World, or even that I prefer Disney Cruise Line to Walt Disney World–neither of those statements would be true. They are totally different experiences, and most comparisons are going to be a disservice to both.

This is all only to say that one thing I really like about Disney Cruise Line is that it conveys a vibe I used to get from Walt Disney World; one the parks used to have until around the late 1990s. 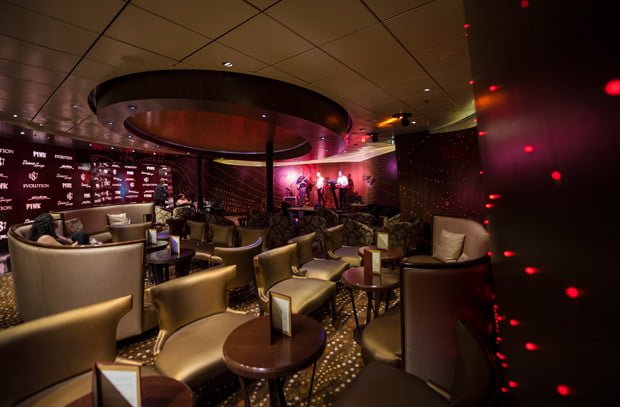 I suppose you could argue that I’m looking back at the Walt Disney World of my youth with rose-colored glasses and it’s benefiting from the lens of nostalgia. That might be a fair point. However, I would hazard a guess that those Walt Disney World fans who have been visiting since the parks since the 1990s who have set sail with Disney Cruise Line would agree with at least some of my sentiment. (Anyone want to back me up–or contradict me–here?)

Okay, that was a long tangent, but I think it was worth mentioning–especially since the level of service is one of Disney Cruise Line’s biggest selling points, in my opinion. Let’s move on… 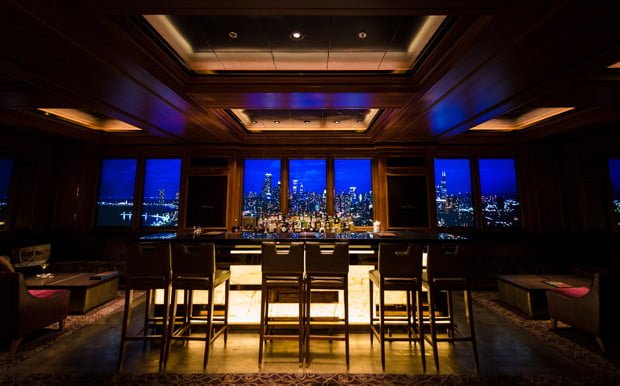 After the Golden Mickeys, we had wandered around the District (see some of the above photos) to check out the nightlife scene. As compared to the Disney Magic, I’d say the lounges/night clubs on the Disney Dream are a distinct advantage. Above and below are two scenes from my favorite bar, Skyline Lounge… 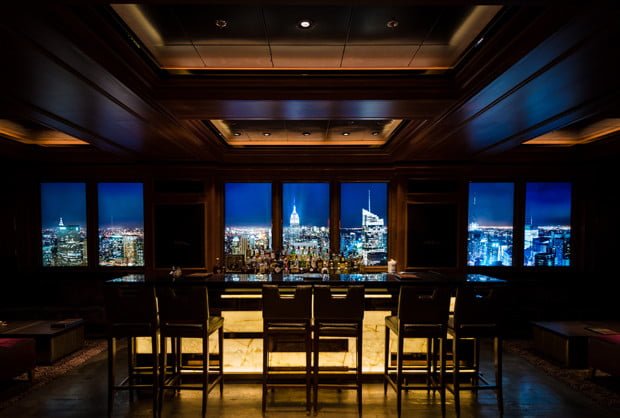 It’s fun watching the skyline behind the bar change, and the bar’s intimate size is also nice. (It’s also somewhat hidden, and there was rarely anyone in here.) 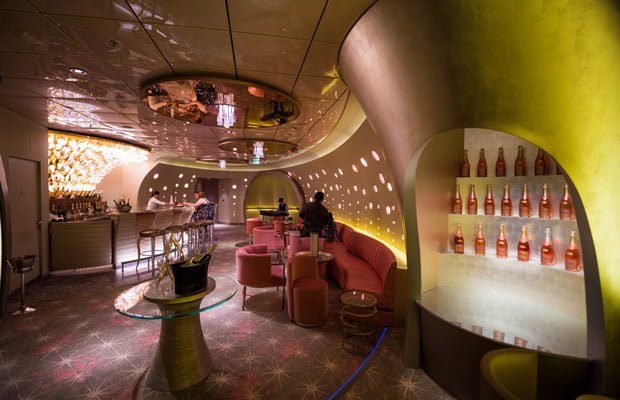 While this bar is not my cup of tea, the design is also pretty fun… 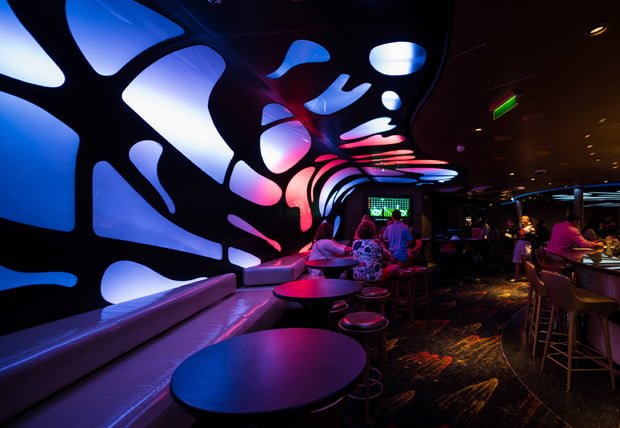 The environments of all the lounges are pretty good. We didn’t spend a ton of time here late at night, but they were reasonably busy after the second dinner seating later that night. 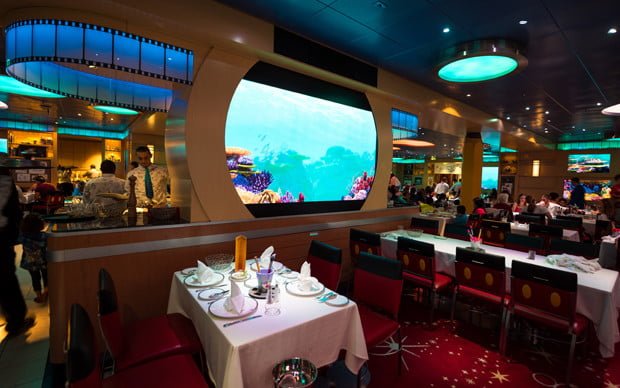 The Disney Dream version is quite a bit different than the Disney Magic’s version, with this one basically being Turtle Talk with Crush: Dinner Show. 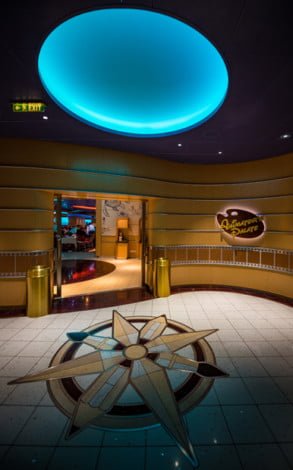 That’s not a bad thing, it’s a good thing. Turtle Talk works really well as a dinner show, perhaps better than it does as a theme park attraction.

While I think the attraction itself has humor that works on multiple levels, the restaurant seems like a better balance of humor aimed at adults and aimed at kids (this might also be because there were a lot of adult-heavy tables adjacent to us). 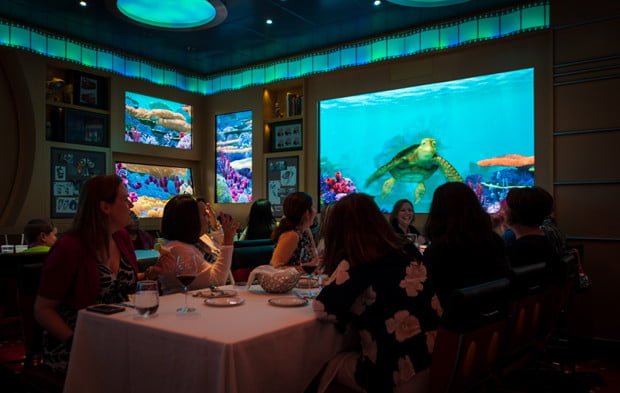 Having multiple screens around the restaurant also works to Animator’s Palate’s advantage, as they can function in conjunction with one another as something of an aquarium, with visual gags playing out over the course of multiple screens, and interesting elements away from the main action (wherever Crush is). From a show perspective, this is definitely the best restaurant aboard the Disney Dream.

Our food was also really, really good. In our effort to qualify for the Gluttolympics, we ordered several appetizers, entrees, and desserts. I’ll do a separate review of Animator’s Palate on the Disney Dream at a later date, but here are some food photos from our meal: 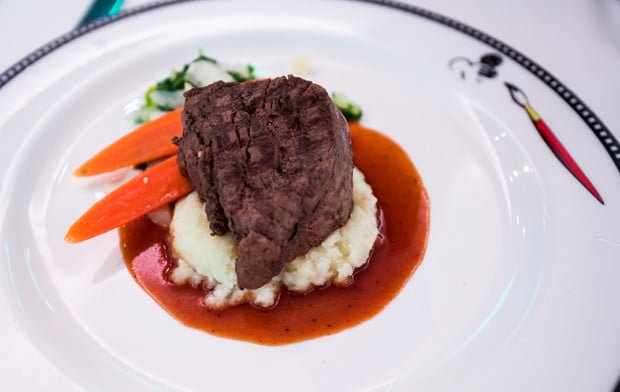 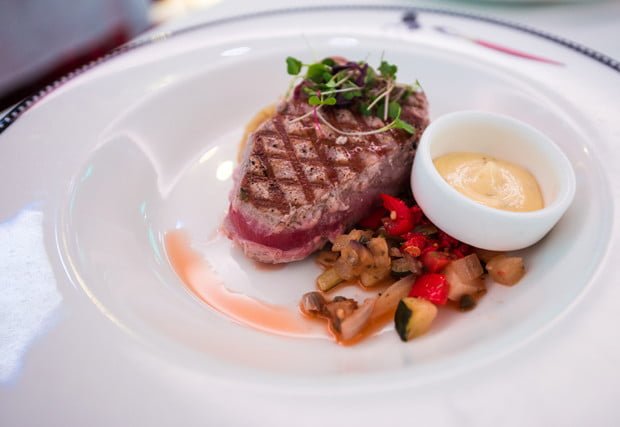 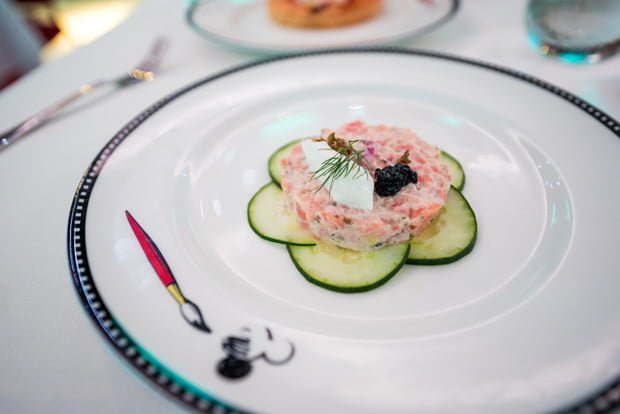 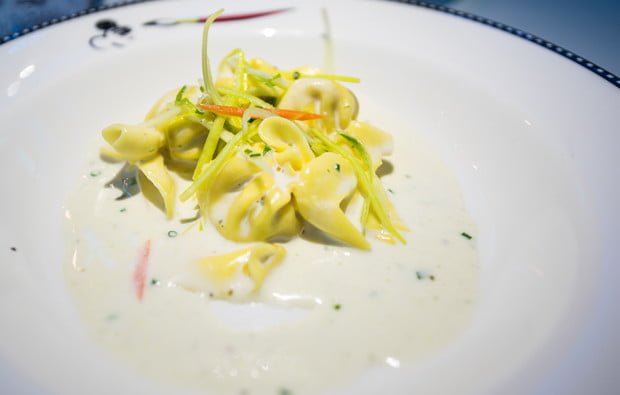 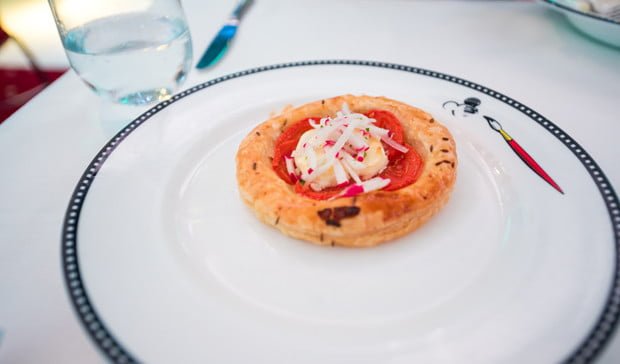 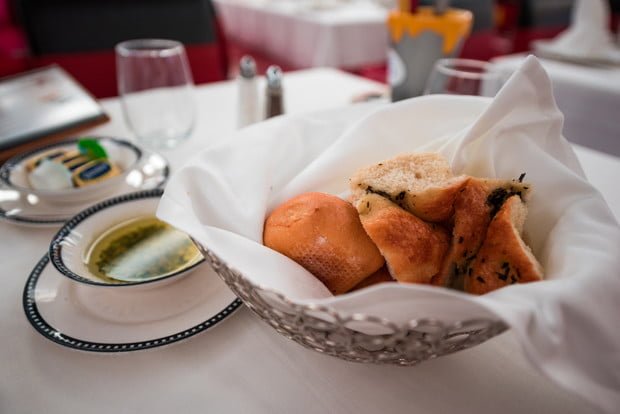 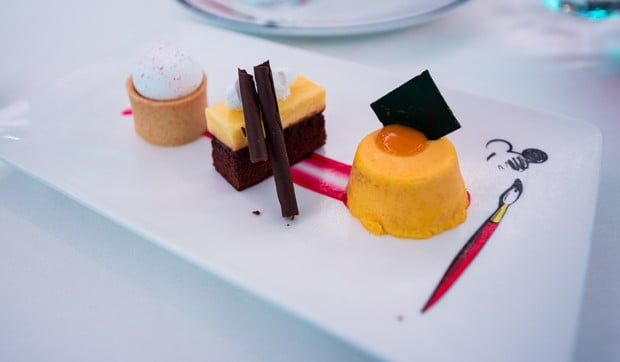 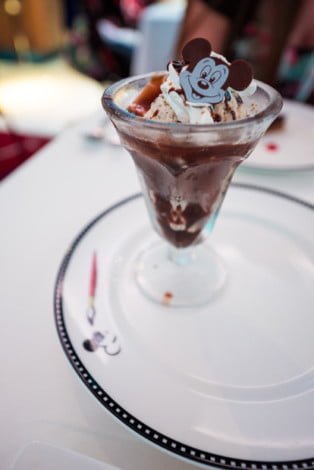 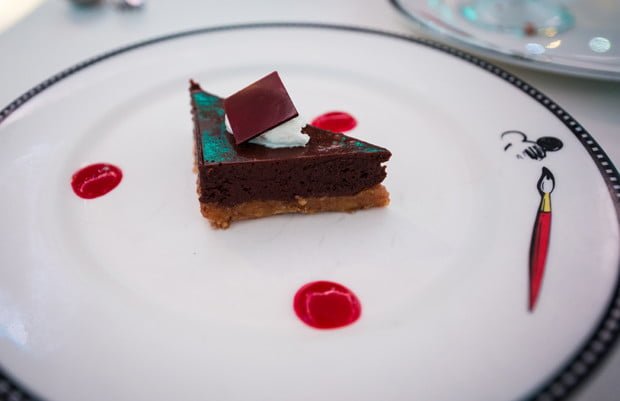 After our waiters got over the initial shock of how much food we were able to put down, they challenged us to a puzzle. We failed miserably at this, which was embarrassing. I vowed that we’d mentally prepare ourselves for the next one, so we’d do better. 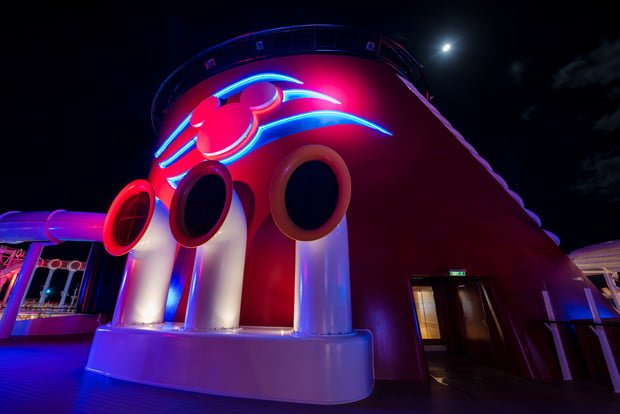 Following dinner, I made the tough hike up to the top deck (after eating so much for dinner, this was basically like climbing Everest for me) and took a few night photos. 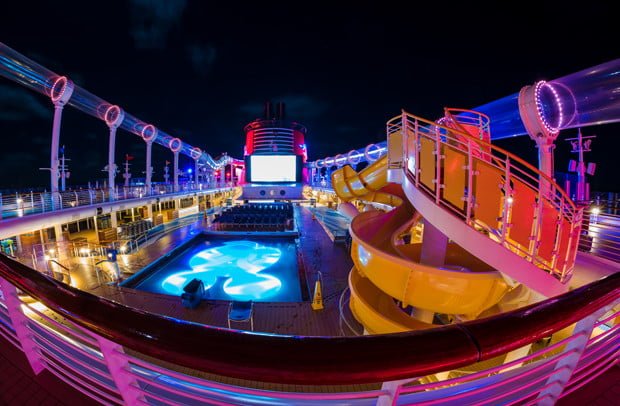 Not many people were up there, so the atmosphere was pretty pleasant: there was a nice breeze, full moon overhead, and Antman playing on the Funnel Vision. (I know whenever I think of “pleasant atmosphere,” Antman is the first thing that comes to mind. 😉 ) 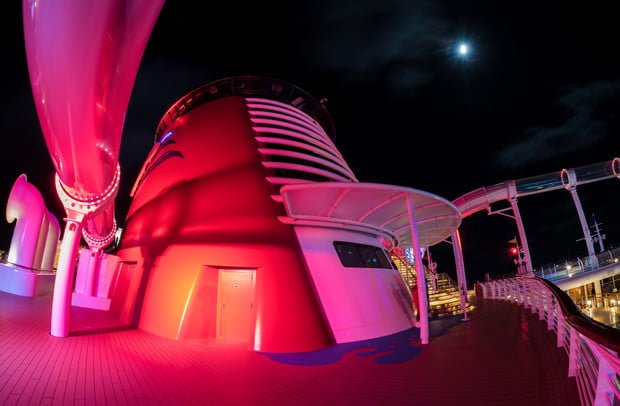 Now, a confession: after this, we watched Moana in the Buena Vista Theater. That might seem like an odd confession, but I have always been perplexed by why people would pay so much money to go on a cruise…only to watch a movie. (Not sure if I’ve written it on the blog, but I’ve definitely said it to Sarah on past cruises.)

Well, as is often the case, I was wrong in my judgment of something I had not experienced. Aside from the obvious that Moana is an excellent movie, relaxing in the theater watching a movie was a nice way to decompress after being in the sun most of the day, and it being able to stroll into the theater at our leisure without worrying about driving there, parking, buying tickets, etc., made it even more enjoyable.

I’d imagine that unwinding in there after a full day at Castaway Cay would be an even more relaxing experience. It’s something I’d definitely do again, and I’m perfectly fine admitting I was wrong on this, and that my opinion of movies on cruises has now changed. Once the movie was over, it was after midnight, so we decided to call it a night.

Have you ever set sail on the Disney Dream, or one of the other cruise ships? Have you done the Bahamian itinerary? What do you think of the service standards of Disney Cruise Line as compared to the parks? Do you think Disney Cruise Line is worth the premium pricing?Thoughts on Animator’s Palate, The Golden Mickeys, The District, or anything else we’ve covered in this cruise report? Any other tips to add or recommendations? If you have questions or thoughts, please share them below and we’ll try to respond!