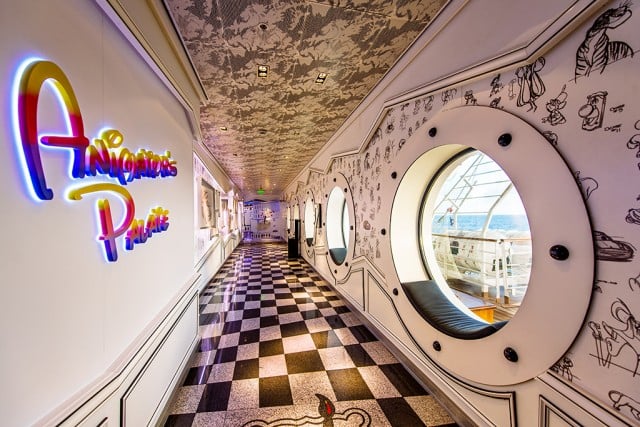 Animator’s Palate is a restaurant on the Disney Cruise Line ships that’s more like a dinner show. It is part of the standard, rotational dining, and is arguably the highlight of the cruise for many guests. This is an animation-centric restaurant aboard each DCL ship that uses some clever Imagineering to put on one seriously cool (dare we say “magical”) show. The menu purports to be “Pacific Rim,” but it more or less seemed like standard, American cuisine.

Even if you’ve never stepped off of dry land, if you’re a Disney fan, chances are you’ve heard of Animator’s Palate. It’s the cool restaurant that is touted as changing from black and white to color during the course of the meal. If you said “huh?” as you read that last sentence because you’re actually not familiar with Animator’s Palate, you may not want to read any further.

Reviewing Animator’s Palate is a bit tricky. It has been featured in approximately 1,534 Travel Channel specials by this point, so most people at least understand the premise. I’ve seen just about all of these specials, and even I didn’t know how the full show played out before experiencing it. So in that regard, I don’t want to “spoil the show” of Animator’s Palate for anyone else…

In fact, since first publishing this review, we’ve done several additional cruises and been back to Animator’s Palate countless times. We’re big fans and Animator’s Palate even made our list of the Top 10 Moments of Disney Magic. Suffice to say, this is one of the reasons to set sail with Disney Cruise Line. 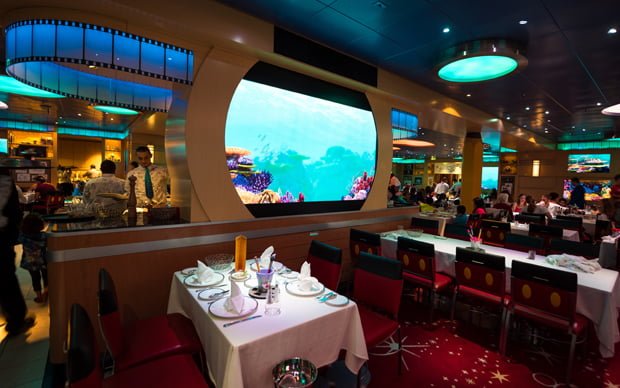 It’s also challenging to review Animator’s Palate because our experience with the meal itself was radically different than it was with the dinner show. We’ve heard many people praise Animator’s Palate for its cuisine, but we were much (much!) more impressed with Palo, and even our dinner at Lumiere’s was significantly better.

By contrast, I will freely admit that I got goosebumps from Animator’s Palate at the climax of the show. I can’t imagine that being as special of a moment the second time around, but we would still promptly return to Animator’s Palate even if they were serving dog food. 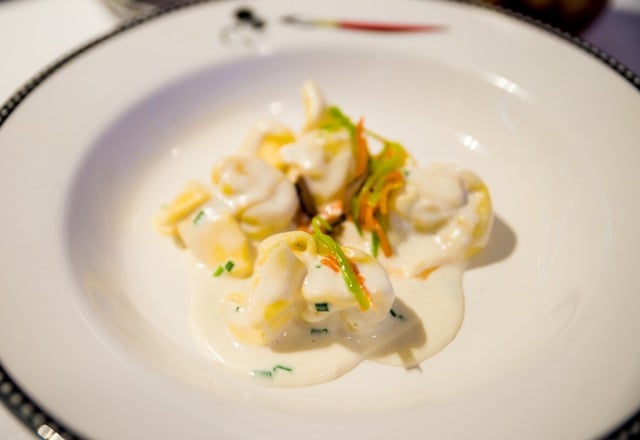 We ordered several appetizers, starting with the Black Truffle Pasta Purseittes. The portion was small, making it perfect for splitting.

Given that it was pasta in a cream sauce with truffles and cheese, we were expecting something rich and flavorful. It was good, but it didn’t quite hit the ‘high notes’ in terms of flavor. 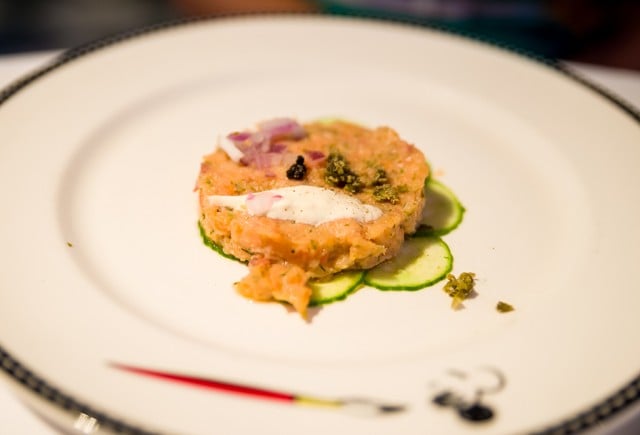 The Smoked Salmon Tartar with capers, dill, onion, pickles, and a horseradish cream was excellent.

Despite being in a tartar, the salmon had a fresh taste to it, and it was perfectly complimented by the onion and dill, with the horseradish cream being a perfect enhancement to the flavor. This was probably the highlight of the meal for me. 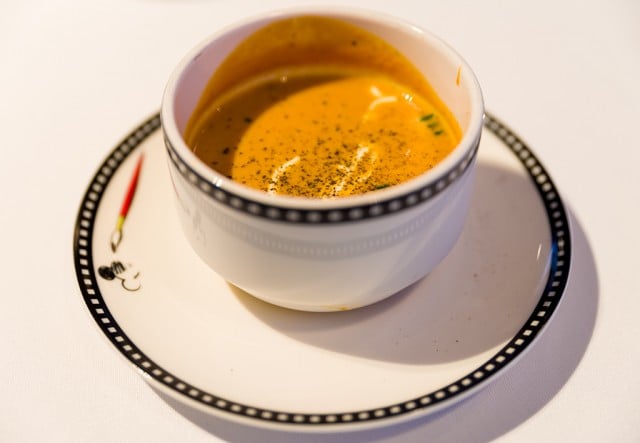 We had heard great things about the Creamy Butternut Squash Soup, so we gave it a try.

It was drizzled with sour cream, which is probably what made the soup. It was sweet and rich, well deserving of the praise. 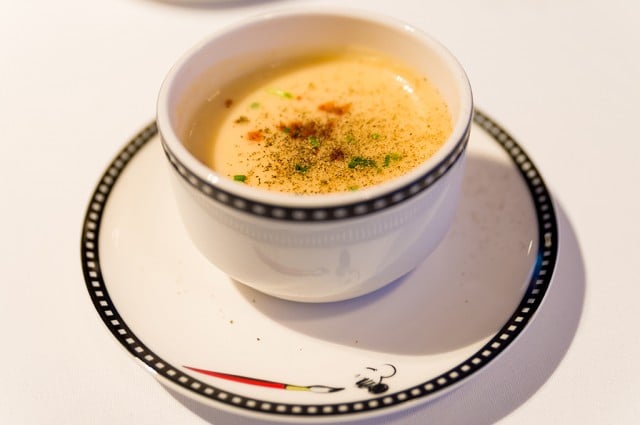 This is the Baked Potato and Cheddar Cheese Soup.

It had bacon and cheese in it…of course it was delicious. 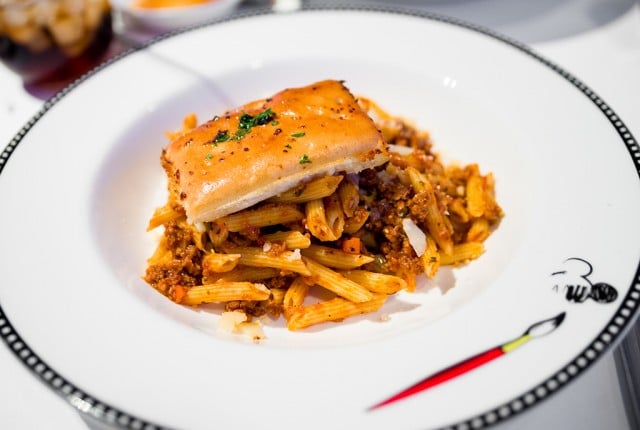 At our server’s suggestion, we also ordered the Pennete Bolognese. This is described as Pennete Pasta mixed with a rich Bolognese sauce garnished with shaved Parmesan Reggiano and Toasted Garlic Ciabatta.

Truth be told, I’m not really sure why we ordered this, as even the most impressive pasta never really wows either of us. The dish was good and I couldn’t really find any fault with it, but it struck us both as fairly ordinary. The flavors were not all that complex, and compared to what we had elsewhere on the Disney Magic, it disappointed. 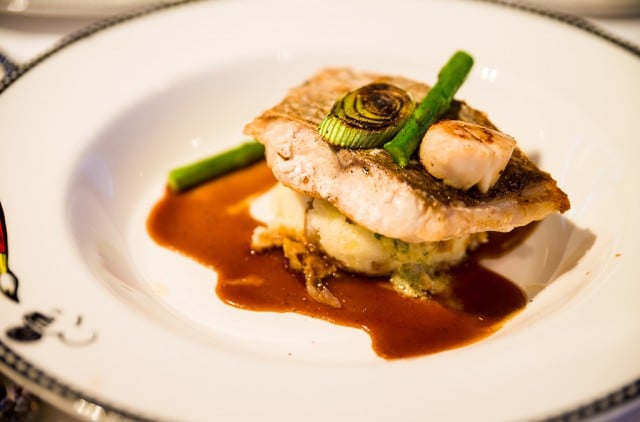 This was another “meh” dish. Snapper is a relatively mild fish, and that’s fine, but the whole dish was pretty mild and bland. It seemed a bit uninspired. 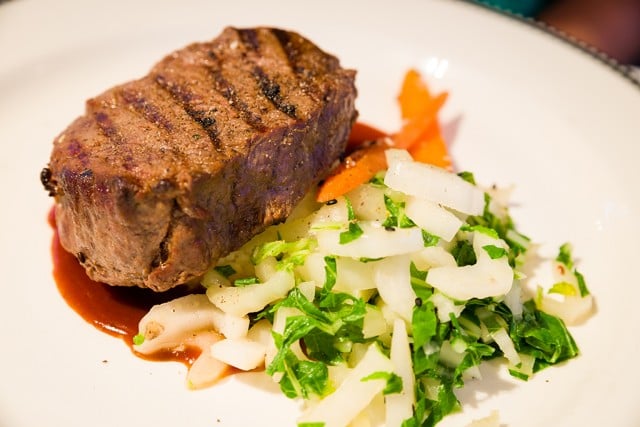 The Ginger-Teriyaki Dusted Angus Beef Tenderloin on wasabi mashed potatoes with bok choy and tamarind-barbecue reduction was the big disappointment.

The meat was overcooked and lacking in flavor, and was just really subpar. A bit more on this one below… 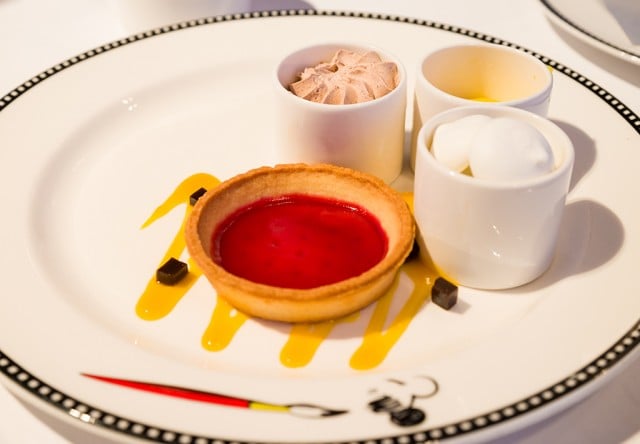 We also ordered a lot of desserts. (For those concerned about wasting food…we ate EVERYTHING we ordered at every restaurant. We don’t waste food, we’re just hogs–and by we I mostly mean me.)

First up is the Sweet Temptations. White Chocolate Fudge Cheesecake, Lemon-Raspberry Tart, and Mango Mousse. The standout here was the Mango Mousse, which was delicious, and inventive. The cheesecake was also good–we weren’t impressed with the tart. 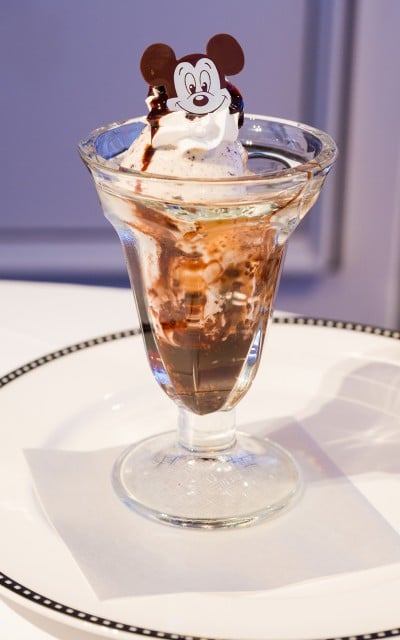 This is the Cookies ‘N’ Cream Sundae. It was delicious, but a very simple dessert.

Tough to screw up ice cream with chocolate sauce on it. 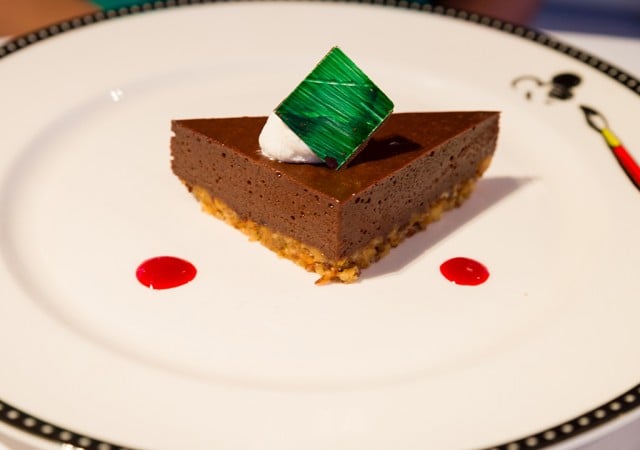 This is the Crunchy Walnut Cake. It’s a dark chocolate mousse with raspberry coulis.

It was rich and decadent, but overall only slightly above average. 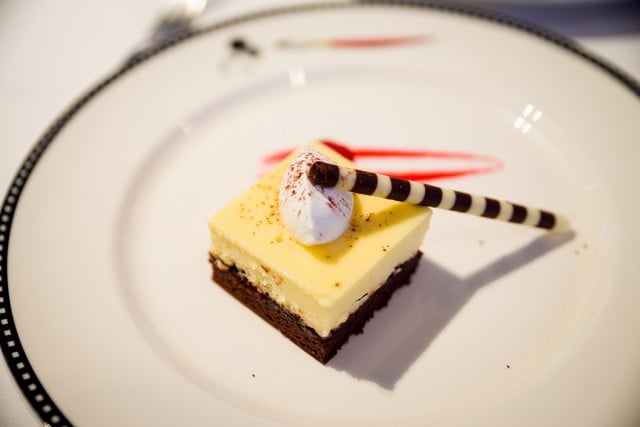 The White Chocolate Fudge Cheesecake was a dessert highlight.

The chocolate flavor wasn’t all that strong, but the cheesecake was good, and the presentation was solid. 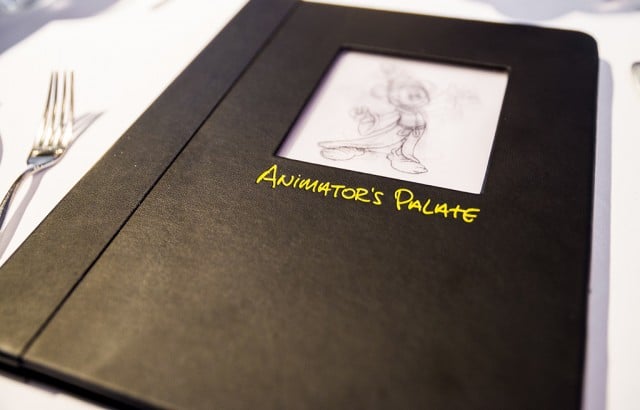 It’s worth noting that subsequent meals we’ve had at Animator’s Palate have been much better, but we still find this to be among the weakest rotational dining option across Disney Cruise Line’s entire fleet.

With that said, the food is not the star of the show at Animator’s Palate. 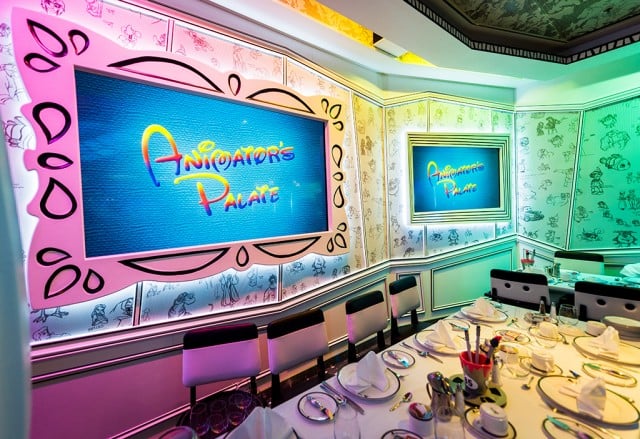 The real star of the show is the restaurant itself. I can’t think of a single place in the parks to which I can compare this restaurant/dinner show. Calling it restaurant doesn’t quite do it justice, but calling it a dinner show is probably a bit too much. It doesn’t compare to normal restaurants, but it’s nothing like Hoop-Dee-Doo Musical Revue, either.

It’s sort of like The Magic of Disney Animation: The Restaurant. It’s an engaging, dynamic restaurant that has that certain je ne sais quoi that can best be described as Disney magic. That really doesn’t explain it at all, but it’s the best you’re going to get. 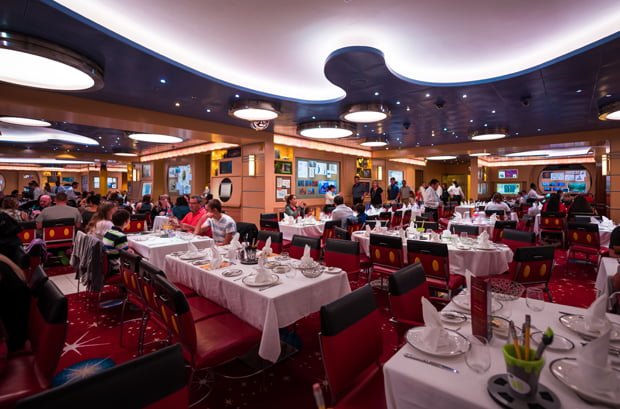 Like every restaurant on the Disney Cruise Line, service is absolutely spectacular at Animator’s Palate. This excellent service coupled with the show elevates what would otherwise be a pretty average restaurant into something truly special.

Overall, Animator’s Palate is one of the most fun Disney restaurants we’ve ever experienced, and that’s saying something. Animator’s Palate has “Disney magic” and that’s a quality that cannot be overlooked. At the same time, we can’t overlook the food quality, either. It is a blemish on an otherwise incredible restaurant, and while the show totally redeems the restaurant, we can’t give it a complete pass on the food. With that said, Animator’s Palate is one compelling reason to sail on the Disney Cruise Line, especially if you have kids, and you shouldn’t hesitate for a moment to dine here. Just keep in mind the reason why you’re there–and it’s not the food.

Planning to set sail aboard one of the Disney Cruise Line ships? Read our comprehensive Disney Cruise Line Guide to prepare for your trip, plan entertainment and other activities, and learn what to expect from your Disney cruise! For Disney updates, discount information, a free download of our Money-Saving Tips for Walt Disney World eBook, and much more, sign up for our free monthly newsletter!