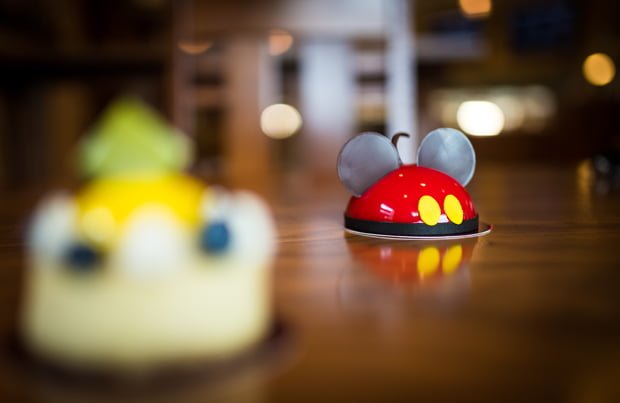 Amorette’s Patisserie is a bakery in Disney Springs at Walt Disney World that serves up high-end cakes and pastries in its dessert shop. In this review, we’ll share food photos of these beautiful desserts, and share thoughts on this exceptional bakery and how it compares to the competition at Disney Springs.

If you’ve never heard of Amorette’s, you’re not alone. It debuted with Town Center at Disney Springs last year, but it feels like it got lost in the shuffle. While it seems like everyone was gushing over the third-party Sprinkles chain expanding into Florida, Disney-owned and operated Amorette’s Patrisserie was flying under the radar.

I’m not entirely sure why, as it has the hallmarks of a popular Walt Disney World dessert spot: great variety, exceptional taste, and (most importantly?) eye-catching designs that are highly Instgrammable. After waiting far too long to finally give Amorette’s a try, we’ve now done it a couple of times and wanted to share some thoughts on it…

Frankly, I’m not sure why Amorette’s is not the “it” dessert spot among Walt Disney World fans. Aside from occasional mentions of it on Twitter, I’ve heard almost nothing about it. I still see exponentially more people posting pictures of their Starbucks cups on the hub grass than I do from Amorette’s. Perhaps it’s because cupcakes aren’t in the Amorette’s wheelhouse? Maybe there’s some truth to the jokes about Walt Disney World and cupcakes? Whatever the explanation, Amorette’s definitely deserves your attention.

Personally, I feel there’s a place for both cupcakes and desserts like Amorette’s serves. Disney cupcakes are like summer blockbusters: flashy and fun. By contrast, the desserts served at Amorette’s are like an arthouse film (perhaps a French one?): nuanced and worth savoring, and likewise beautiful. 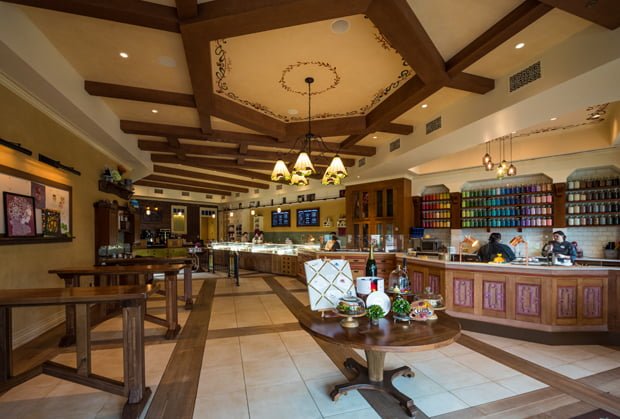 At Amorette’s, you step into a French patisserie with an open kitchen where pastry chefs decorate signature cakes, and put the finishing touches on other desserts. The attention to detail is incredible, both on the presentation of the desserts themselves, and the boutique-style hatbox packaging.

In terms of theme and backstory, the idea is that a pair of sisters are the current owners of the shop, which has been passed down through many generations of their family. Amorette’s family-run patisserie dates was established in the early days of Disney Springs, around 1900. 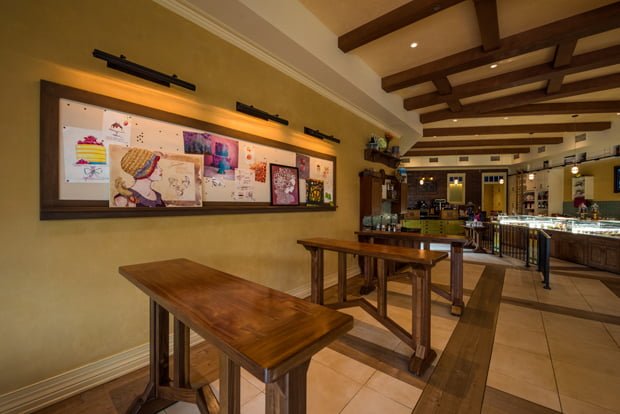 I’m not sure why this family in Florida would’ve chosen an Art Nouveau design style with clear French influences, but that’s no doubt in the backstory, too. Whatever the explanation, I just hope it involves time travel, Owen Wilson, and Jean Cocteau. If these backstories are going to be convoluted, they might as well be weird, too.

In any case, the bakery is charming. It’s large enough to capably absorb crowds (although we’ve never seen it crowded), but with enough design flourishes that it has a sense of intimacy and warmth. It’s certainly not the thematic high-bar of eateries at Walt Disney World, but at this point, I’m willing to award some points simply because it didn’t rehash the ‘repurposed ____, and now a mid-tier hipster restaurant’ concept. For what it is, Amorette’s has a really pleasant environment. 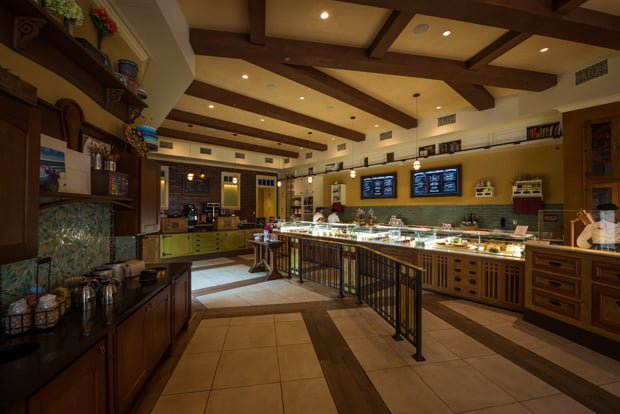 Amorette’s Patisserie truly offers something for everyone. There are eclairs, cheesecake, opera cake, macarons, and tarts. Most of the desserts are around $1-2 more than what you’d find at other counter service spots around Walt Disney World, but what you’re getting here is table service quality.

When viewed through that lens, the desserts at Amorette’s are about $2-5 less expensive than comparable alternatives around Walt Disney World. (Yes, that’s exactly how we justify it to ourselves.) We’ve been incredibly satisfied with the desserts we’ve tried at Amorette’s thus far, and felt they represented good value for money relative to other Walt Disney World desserts. 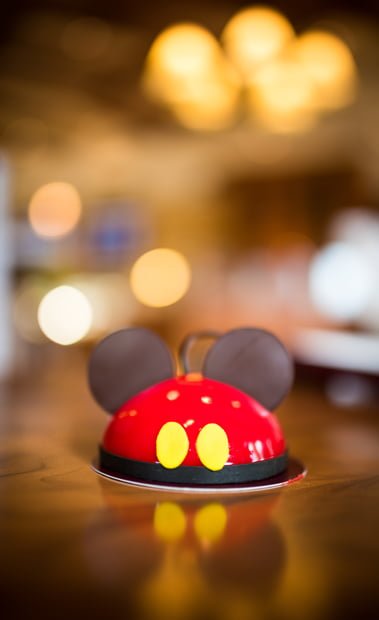 The Mickey Mousse is probably the most popular thing at Amorette’s, and definitely succeeds at being both photogenic and delicious. This consists of chocolate chiffon cake, dark chocolate mousse and white chocolate mousse.

While I liked this, the dark chocolate was a bit rich for me. With that said, the flavors played well with one another, and the variety of textures really enhanced the dessert. Clearly high quality, not just superficially pretty. 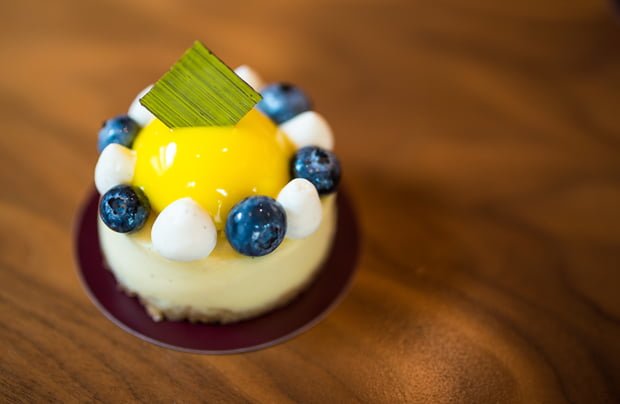 The 49th and Broadway Cheesecake is one of the best desserts we’ve had at Walt Disney World. The cheesecake itself was rich and creamy, while the lemon curd and blueberries were (literally) the icing on the cake, but also went a long way in further elevating an already exceptional dessert. Highly recommended.

About the only thing I cannot quite stomach price-wise is the macarons. At over $2 each, these seem steep to me. In fairness, this is my reaction to almost everywhere that sells macarons. I still cannot comprehend why these pretentious little cookie wannabes cost so much money! 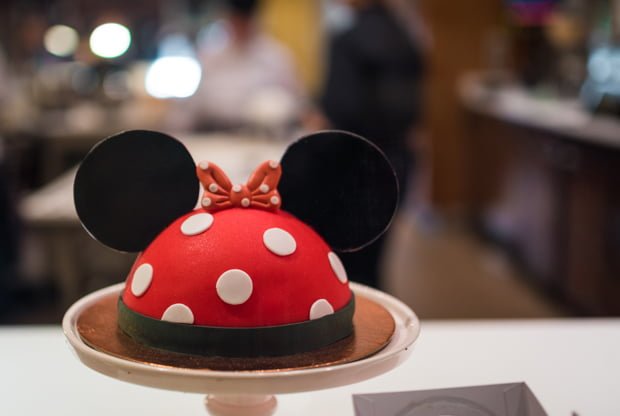 Then there’s Amorette’s Signature Cakes. The first time I gazed at the price tag on one of these, I got a bit of sticker shock at the $55 price, but given the size and quality, that doesn’t seem too far off. These cakes are beautifully decorated, with multiple layers, and most are covered with fondant. We still need to find an excuse (and enough people to share it with) to buy one of these.

One thing we have not had the chance to try yet is the drinks, which we’ve heard are good. Amorette’s Hot Chocolate Ganache with Chantilly and Shaved Dark Chocolate is particularly intriguing, but it’s probably not something that’ll be of interest until the weather chills out a bit. 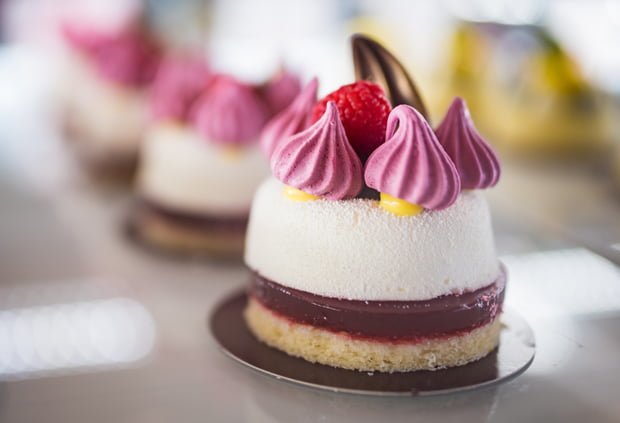 The thing I find myself wondering is how a place like Sprinkles can compete with Amorette’s. I keep coming back to this cupcakes v. Amorette’s debate, which is admittedly one of my own invention. This final comparison is based more on Sprinkles being the most popular bakery at Disney Springs than it is what they sell.

Don’t get me wrong–Sprinkles is a pretty good cupcake. However, the cupcakes look totally ordinary and don’t have the obvious ‘hook’ of Disney styles (they defy categorization as the ‘summer blockbuster’ mentioned above), and are expensive. Their appeal is that they are gourmet and high-quality.

That’s also the appeal of Amorette’s, except its products also have Disney style. If I have to choose between Sprinkles and Amorette’s, I’m choosing Amorette’s every single time. I literally cannot think of a single selling point that puts Sprinkles ahead of it. At least with a “normal” Walt Disney World cupcake, there’s the prospect of a giant monkey rising from the top or Oreos forming Mickeys on it. Amorette’s trumps Sprinkles on both style and substance.

After overlooking it last summer, we’ve quickly gotten to the point that Amorette’s is a must-visit every trip to Walt Disney World for us now. We still have several desserts to try from Amorette’s, and are making it our mission to try them all.

Inarguably, Amorette’s Patisserie is the best bakery/dessert spot at Disney Springs, and arguably the best one in all of Walt Disney World. The real question is whether it’s so good that you should skip dessert at a table service restaurant and do it at Amorette’s instead. That’s a bit tougher to answer, and I really think it depends. There are a lot of Disney Springs restaurants that do desserts really well, and signature dishes that are worth ordering (places like the Boathouse, Raglan Road, and Frontera Cocina come to mind). If you’re at a table service restaurant that doesn’t have a compelling dessert menu, absolutely wait and do dessert at Amorette’s. You will not be disappointed.

Have you had a chance to visit Amorette’s Patisserie yet? What do you think of it? On par with table service desserts for you? Better than Sprinkles or other Walt Disney World cupcakes? Any favorite desserts here? Any questions we can help you answer? Hearing feedback about your experiences is both interesting to us and helpful to other readers, so please share your thoughts below in the comments!