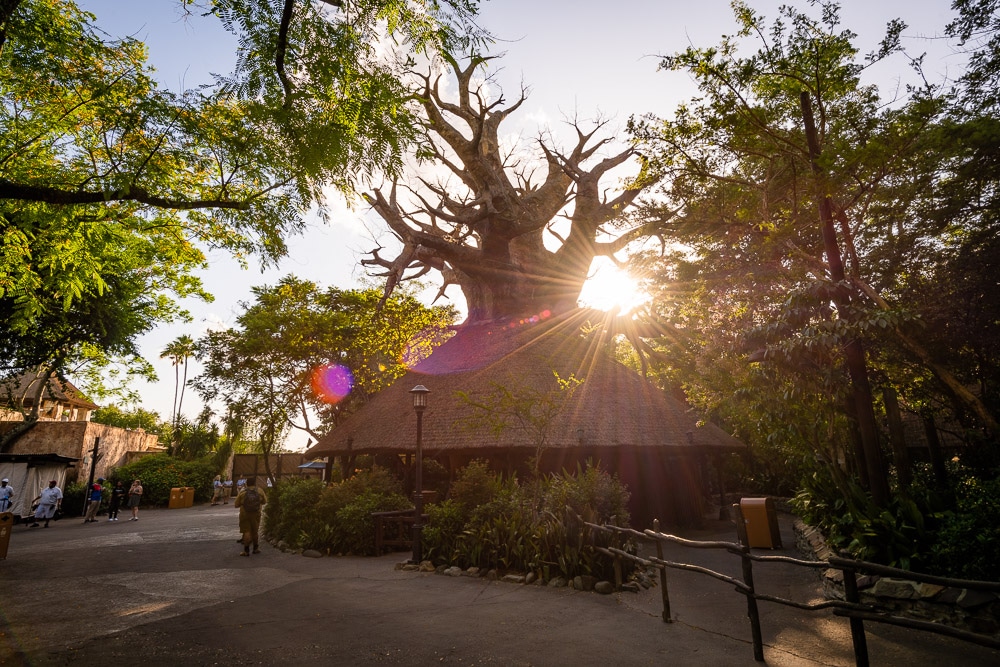 Before we get started, I want to explain the discrepancy between planning posts for Animal Kingdom and every other park. Regular readers might notice that Disney’s Hollywood Studios receives more updates than anywhere else, and Animal Kingdom gets far and away the fewest.

This isn’t because DHS owns a special place in our hearts and we hate visiting DAK. Rather, it’s because Disney’s Hollywood Studios is Walt Disney World’s most frustrating park, and Animal Kingdom is the simplest. With that said, it’s worth reiterating this from time to time, for a couple of important reasons…

Second, it’s always good to revisit plans to see if they still work. This has been our ideal approach to Animal Kingdom for over a year now, even as strategy has shifted elsewhere with the debut of Genie+ and Lightning Lanes. This post also serves as a confirmation or reminder that said plans and strategy still work, as it’s easy to forget or miss things with the non-stop changes at Walt Disney World. 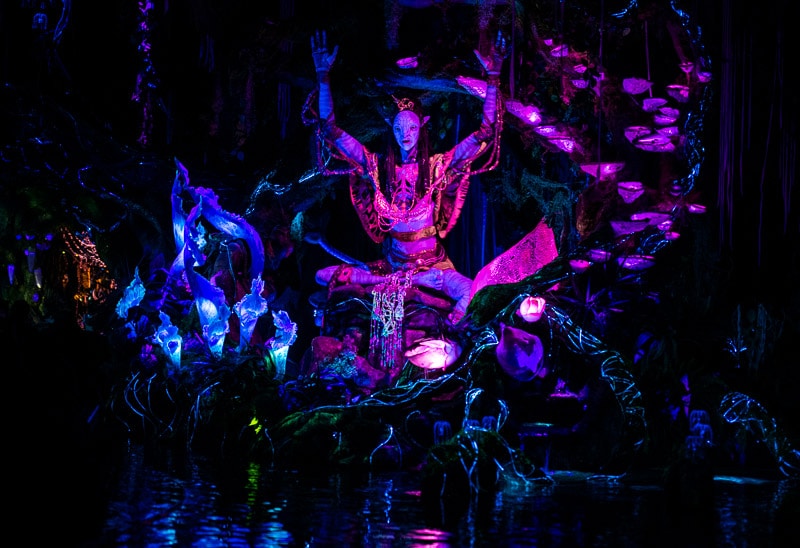 To all of those points, this post was actually directly inspired by something we saw on social media recently. Many Walt Disney World fans took to “dunking” on an overzealous spreadsheeter who meticulously planned every stop of their morning at Animal Kingdom.

Now, there’s a reason you won’t see spreadsheets on this blog. I hate them, think they don’t allow for sufficient spontaneity, and set people up for disappointment when things inevitably go awry. I could rant further, but that’s just my personal perspective–I know many WDW diehards love making spreadsheets. To each their own when it comes to that sort of thing. If you get your kicks by making and following spreadsheets, that’s certainly your prerogative. I enjoy doing laundry. We all have our weird little things. 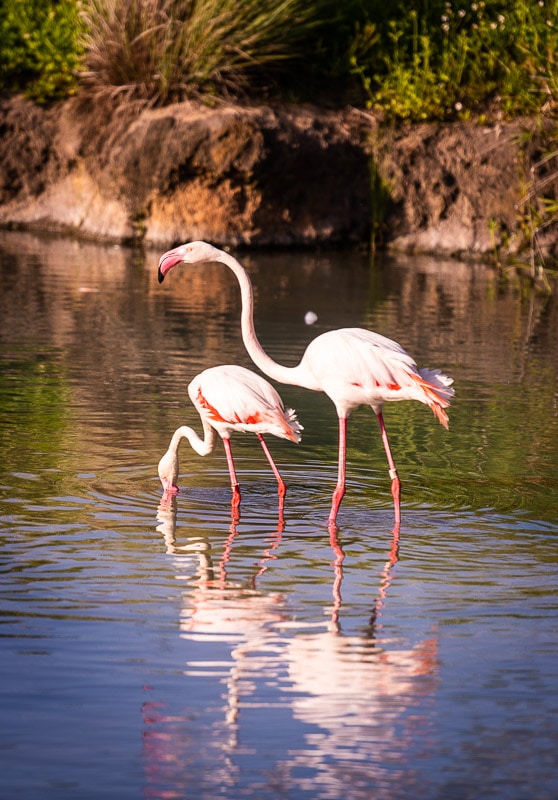 Getting back to the point, fans doing the dunking were criticizing the Animal Kingdom spreadsheet as being an unrealistic itinerary. These were seasoned Walt Disney World veterans, many of whom have been dozens of times. The thing is: they were wrong. Setting aside some dubious durations here and there, the totality of the spreadsheet was accurate and completely doable. 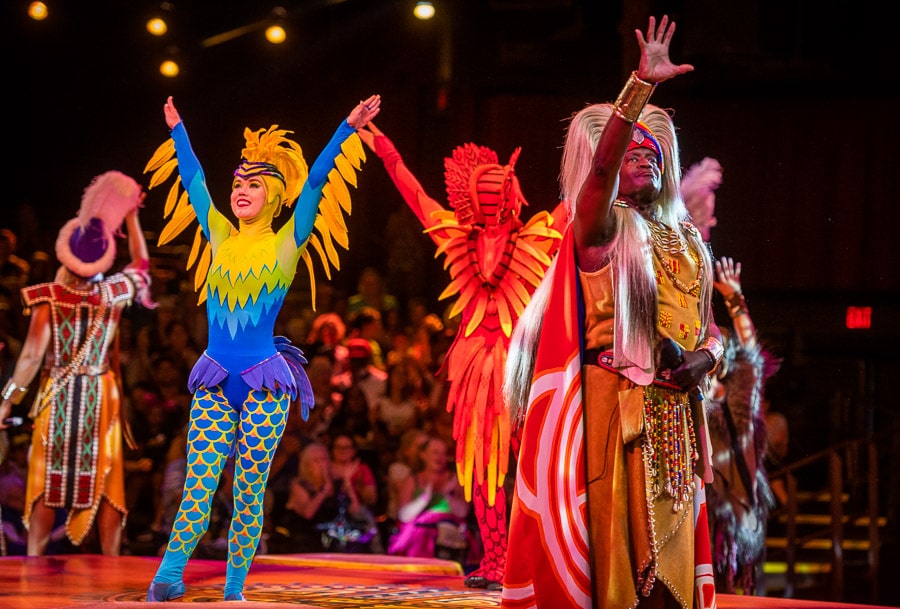 What time you should get to Animal Kingdom for an afternoon arrival plan largely depends on your attitude towards entertainment.

In order to see all of the stage shows and worthwhile atmospheric entertainment, you really need to get to Animal Kingdom by 4 pm. Even then, you’ll be missing some characters and animal acts. If this is your only visit to Animal Kingdom and you’d like to do a variety of attractions and animal trails, arriving shortly after 2 pm is probably ideal. That’s when the mass exodus of Park Hoppers really gets going. 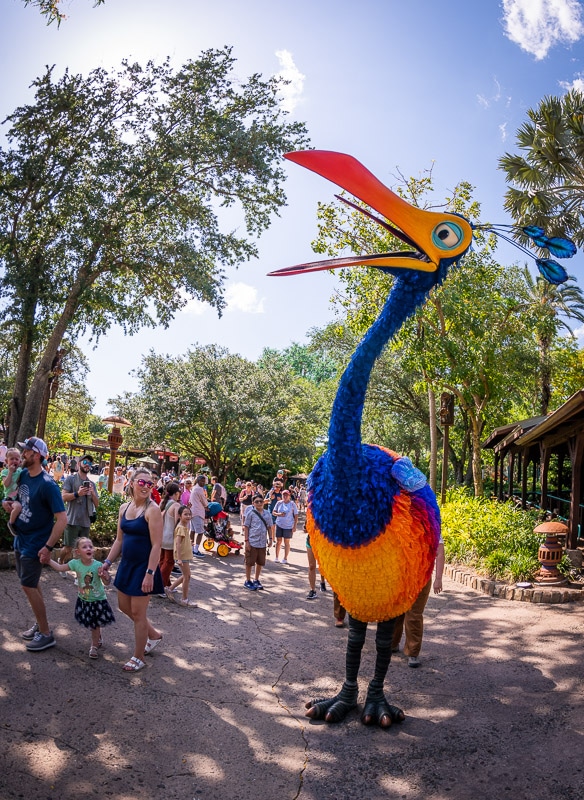 We arrived at Animal Kingdom around 4 pm to make sure we’d catch the free-roaming Kevin from Up.

I’ve gushed about this before, but Kevin is magical, really and truly. She is hilarious, engaging, and adds real personality to Discovery Island. This wandering bird is deceptively simple but surprisingly effective at causing guests to suspend disbelief. Kevin mesmerizes guests as they interact with the bird, having pure and wholesome fun.

Kevin makes lasting memories and has an outsized impact on guests. She is a little thing that makes a big difference–and that’s no disrespect to Kevin–it’s the little things that leave the lasting impressions at Walt Disney World. Entertainment like this showcases how Walt Disney World can do something special without that being a blockbuster new attraction that cost hundreds of millions of dollars and almost a decade to build. 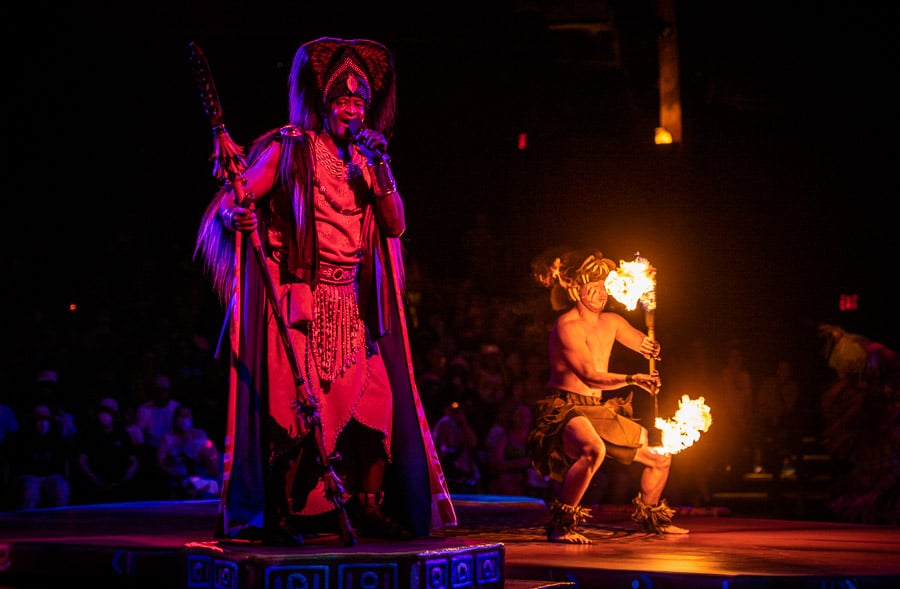 We killed some time after that, before heading to the day’s final performance of Festival of the Lion King.

The iconic stage show is back in full form, featuring tumble monkeys, aerial bird acrobats, and more. It’s one of two spectacular stage shows at Animal Kingdom, with the other being Finding Nemo: The Big Blue…and Beyond! (Formerly Finding Nemo: The Musical.) 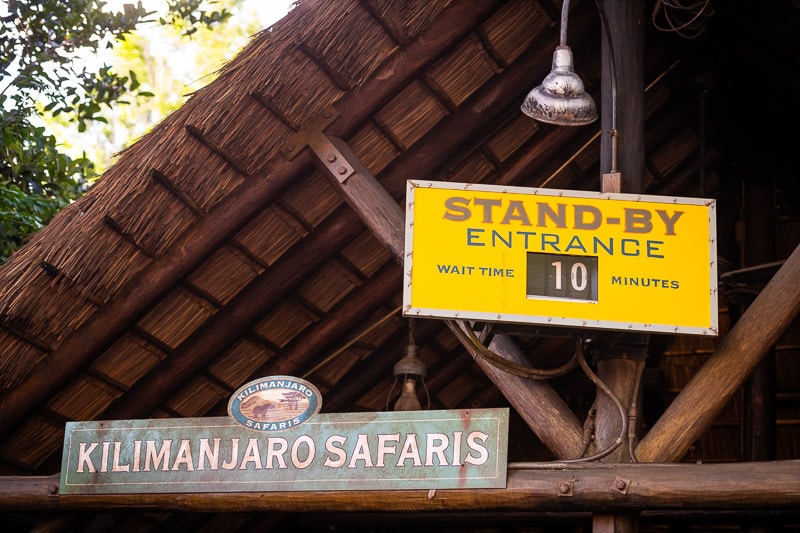 After Festival of the Lion King, it was time for Kilimanjaro Safaris.

The posted wait time was 10 minutes; our actual wait was…however long it took to walk through the empty queue. This was a true walk-on, with vehicles being dispatched about half-full. 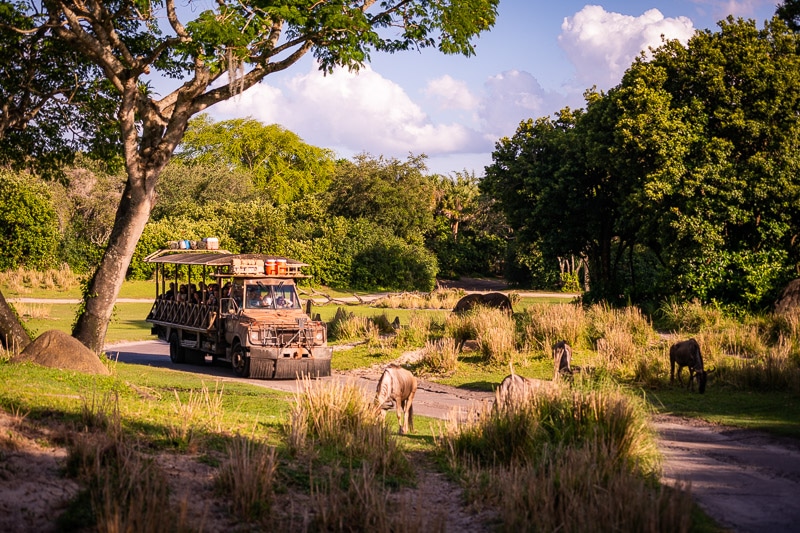 Even though this was a tad earlier than we like to ride Kilimanjaro Safaris, animal activity was solid. Hippos were out and about and lots of animals that we don’t regularly see made appearances.

About the only disappointment was a lack of giraffes. I guess those rumors about Toys R Us making a comeback are true, after all. 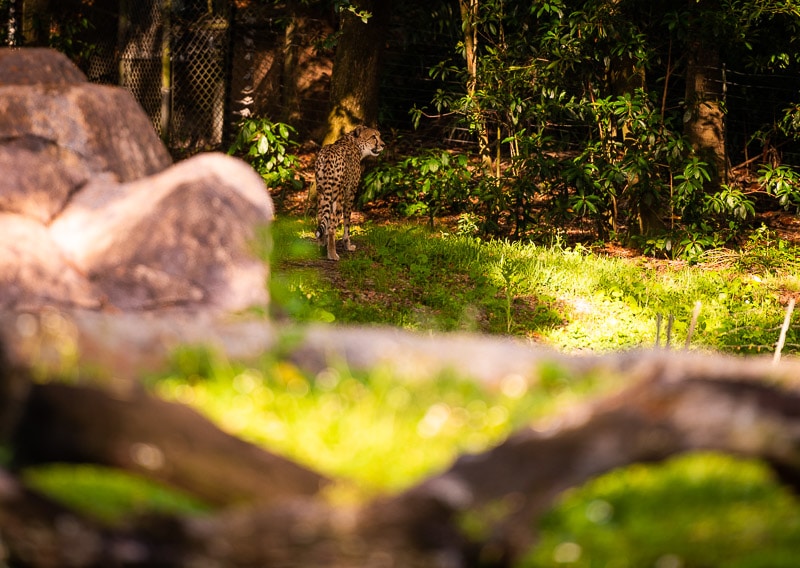 All of the big cats were up and about, most notably, several cheetah.

Unfortunately, the truck went over a bump while I was capturing this photo, and the full weight of my DSLR and 70-200mm lens smacked me squarely in the mouth. Probably should’ve been upset about the fat lip, but missing more shots of the cheetah in action was the worst part. 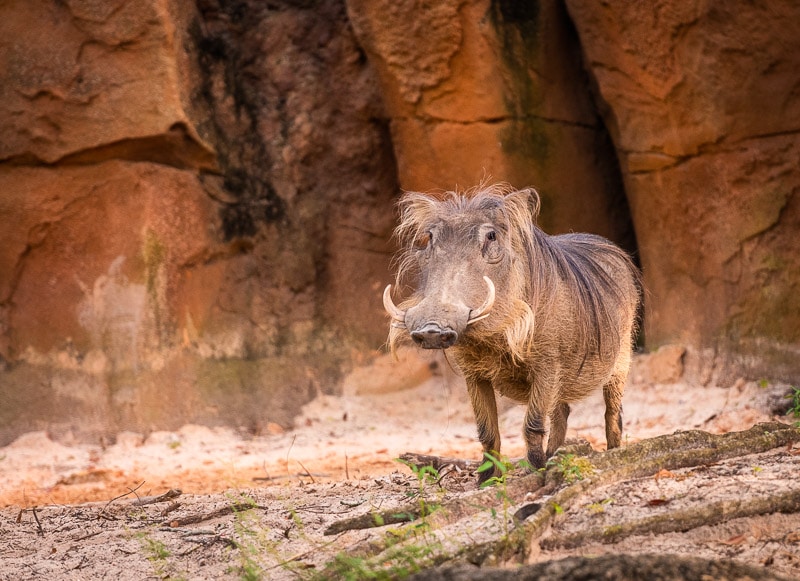 This dude cheered me up. 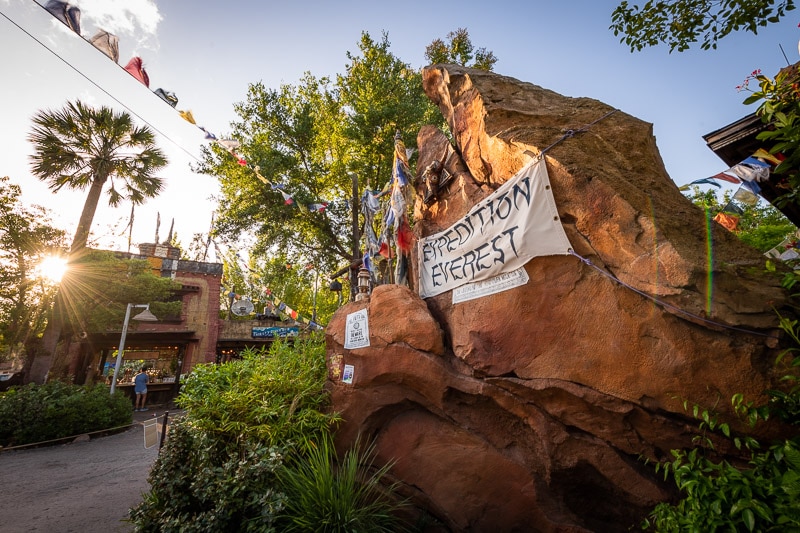 After this, we bounced to the complete other side of the park to do Expedition Everest.

In hindsight, it would’ve been faster and easier to start over on this side of the park and circle Animal Kingdom in a logical fashion. Sometimes we forget that others don’t like to backtrack, or can’t do it as easily as us. (There were also a lot of photo stops, so it’s not like we were actually racing around or doing anything efficiently.) 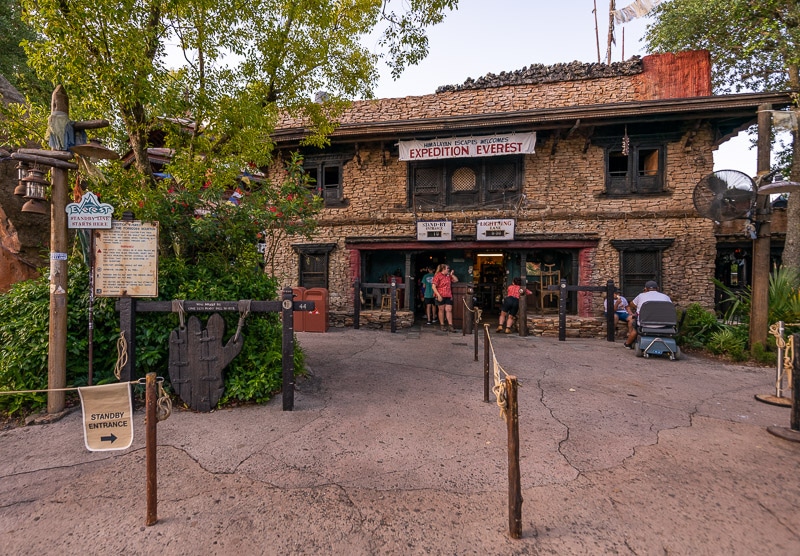 Posted wait time for Expedition Everest was 10 minutes; in actuality, it was a walk-on.

With no wait whatsoever, I did Expedition Everest a second time. My goal was to finally capture a clean photo of the Disco Yet. I did not succeed. 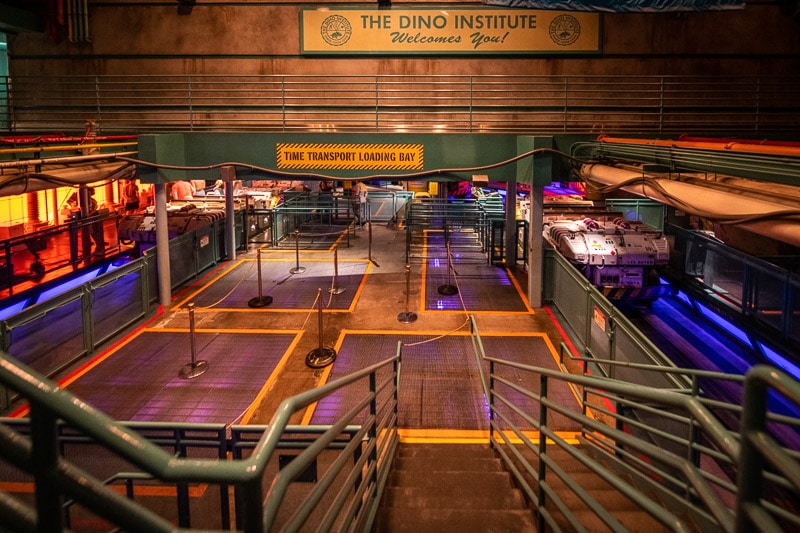 Next up was DINOSAUR, with a posted wait time of 10 minutes; the actual wait time was 11 minutes, but only because we just missed a pre-show cycle. (My bad for stopping to get a photo of the empty atrium.)

It could’ve been a walk-on with better timing. Time rovers were being dispatched with only a handful of guests in them. 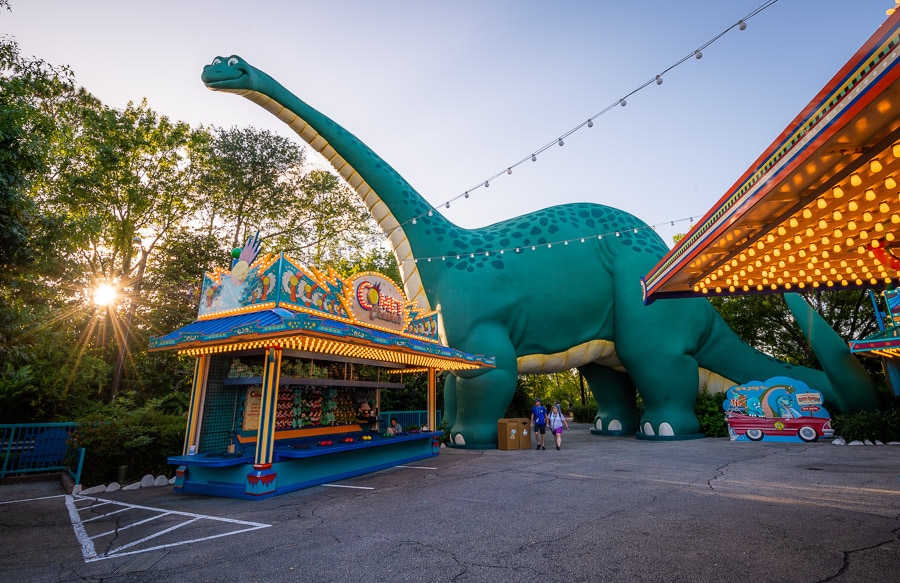 At this point, we still had 2 hours until park closing and could’ve easily accomplished Kali River Rapids (which closes an hour before the rest of the park) or It’s Tough to Be a Bug if we so desired. We did not so desire.

Instead, we wandered around and took more photos before making our way back to the front of the park. 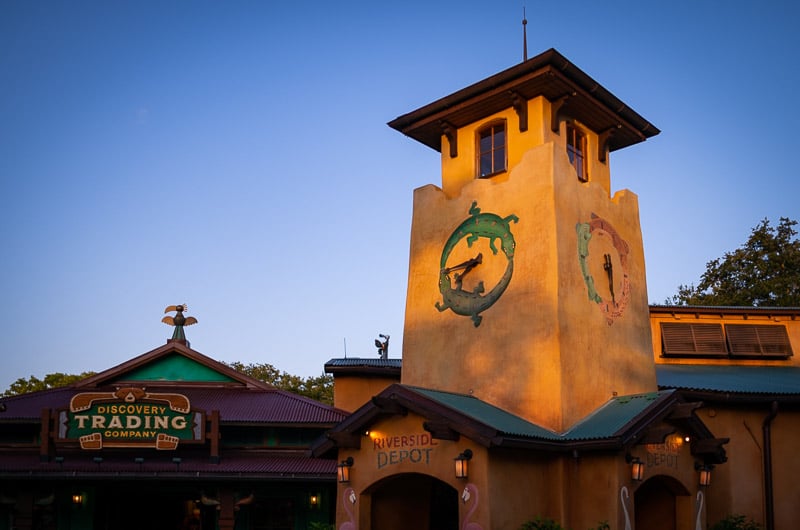 I took the above photo of the Riverside Depot clocks to illustrate the time as we made our way over to Pandora – World of Avatar.

I’m just now noticing that they’re each displaying different times. Also, if you’re anything like me (a millennial raised in the era of digital clocks), you probably can’t read that, anyway. C’mon, I can’t be the only one who has the Mickey Mouse Apple Watch face, but also has the digital clock programmed into the corner…can I?! 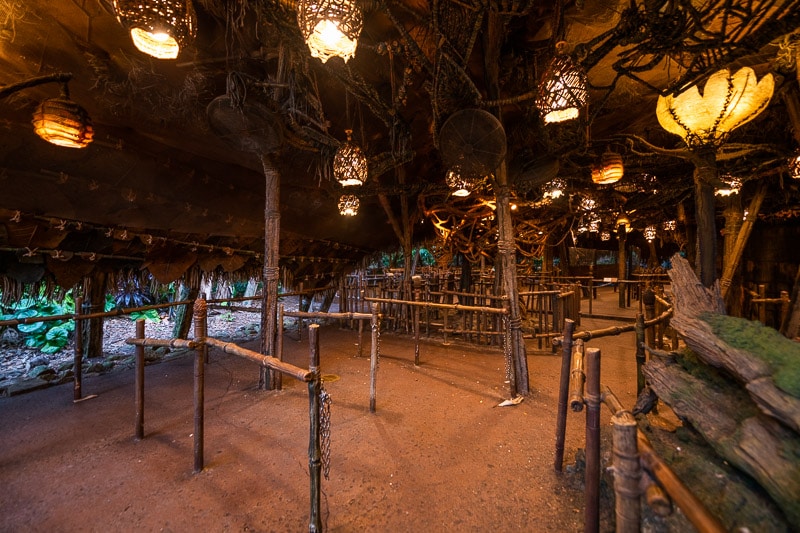 Na’vi River Journey was the second-to-last stop. Just over 30 minutes until park closing, the posted wait time was 55 minutes.

The actual wait time was less than 5 minutes. There was a brief wait at merge for a handful of Genie+ guests; otherwise, it would’ve been a walk-on. 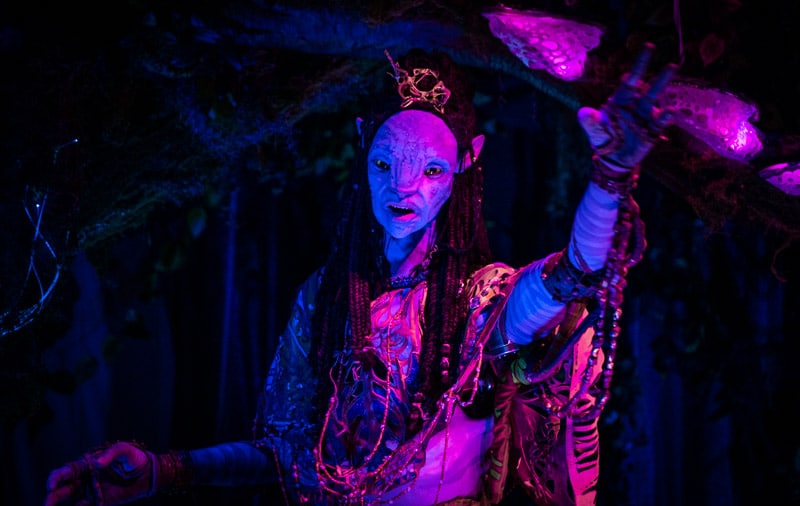 I mentioned this in Disney’s Hollywood Studios Afternoon Arrival Strategy, but the discrepancy between posted and actual wait times is sometimes quite pronounced. It makes us wonder if maybe the goal is comforting Genie+ buyers over their purchase or encouraging future sales of the line-skipping service. Sorta like inflated menu prices for the sake of the Disney Dining Plan.

It’s also possible that wait times are less predictable late in the day because the “abandonment rate” for Lightning Lane reservations is higher. If you use Genie+ to book Na’vi River Journey at 9 am, but get an 8 pm return time…there’s a good chance you’ll be long gone from Animal Kingdom by then. Given that all of the other posted wait times were in the 5 to 15 minute range, I’m inclined to give Walt Disney World the benefit of the doubt here. Not everything was overly-inflated, as is often the case at DHS. 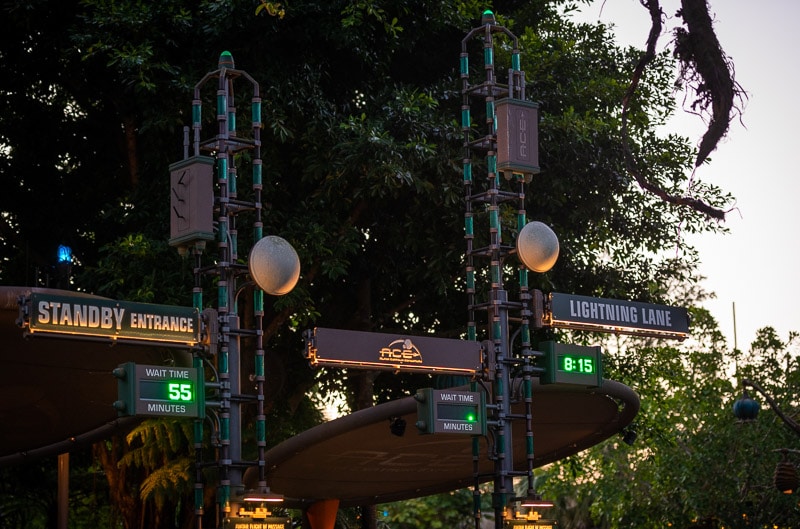 After this, it was time for Avatar Flight of Passage. As you can see, that had a 55 minute posted wait time at exactly 15 minutes before park closing. (It was 70 minutes in My Disney Experience while exiting Na’vi River Journey.)

The actual wait time here ended up being 40 minutes, and almost all of that was quickly moving due to no Lightning Lane returns after park closing. 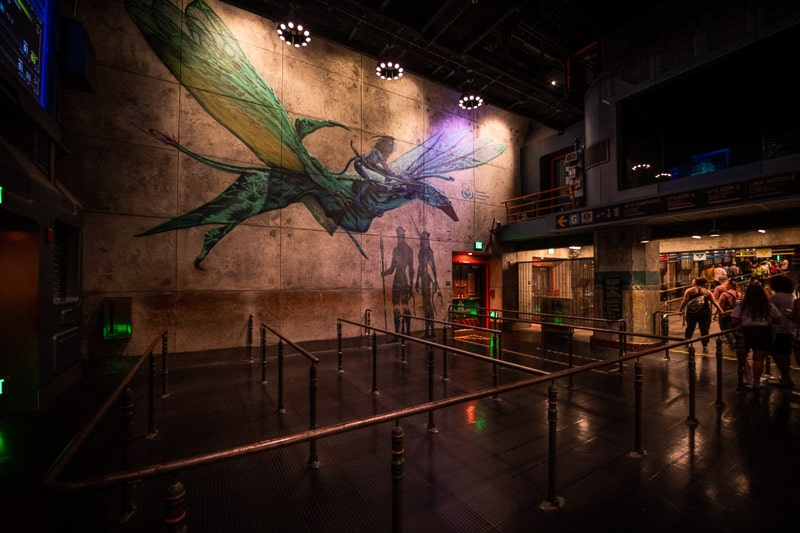 I was actually somewhat surprised that the actual wait time for Avatar Flight of Passage was so close to the posted wait time.

That that the actual wait time was bad by any means, I was just expecting it to be even lower given how literally everything else in Animal Kingdom over the course of the previous couple hours had been a walk-on. Avatar Flight of Passage is still worth the wait! 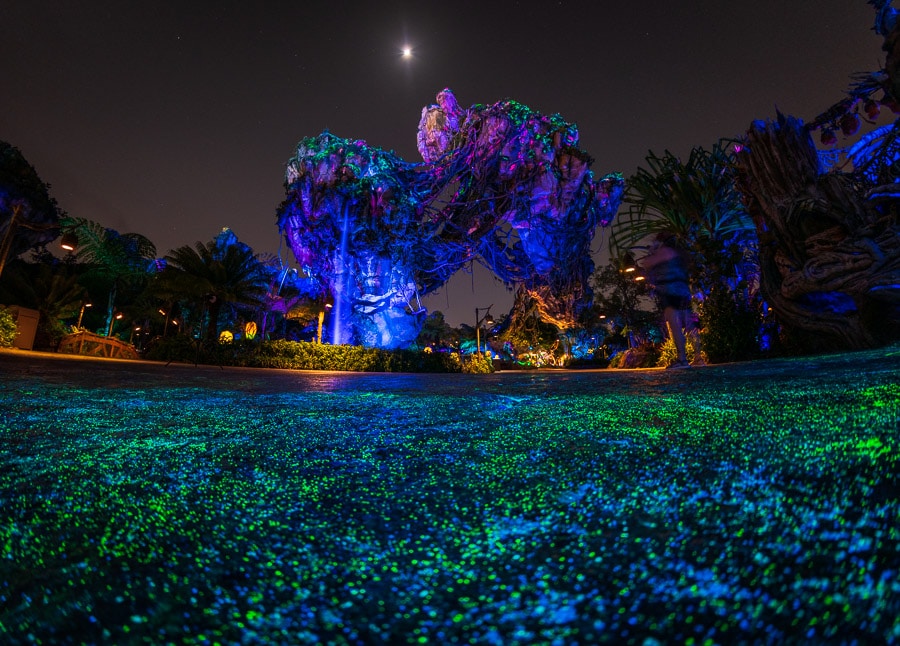 By the time we exited Avatar Flight of Passage, it was nighttime in Pandora.

As cool as this land is during the day, it’s so much better at night–serene, spooky, and with its own orchestra of insects. The bioluminescent pavement is once again looking good–I just wish there were more of it! 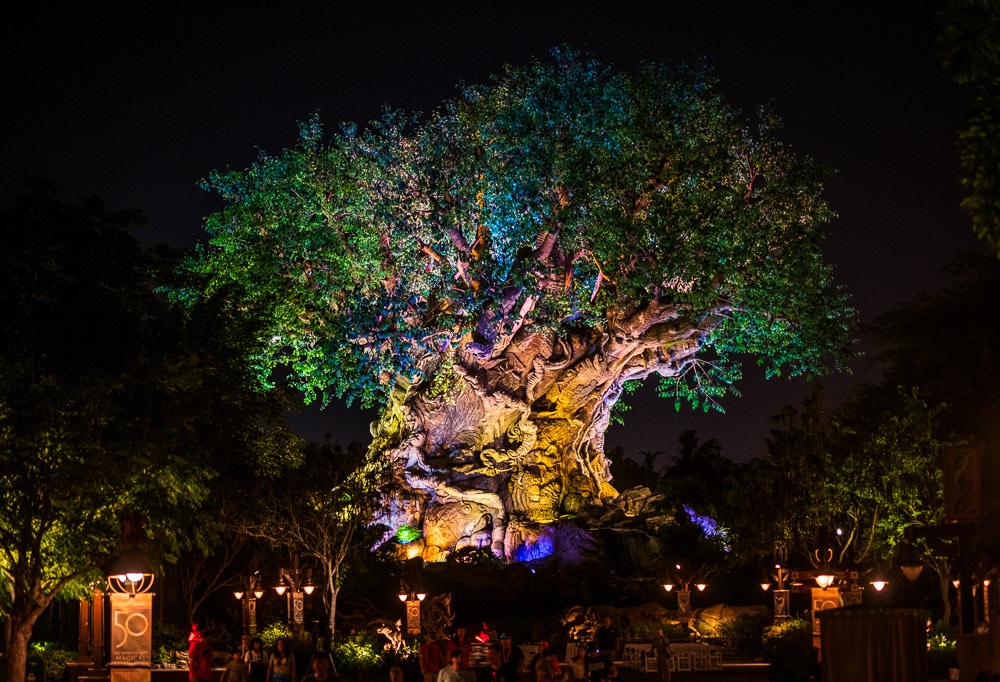 Ultimately, an awesome afternoon at Animal Kingdom. We did every ride that we wanted to do in only a few hours, saw some atmospheric entertainment plus Festival of the Lion King, and did some animal watching as well. Another couple of hours would have sufficed had we wanted to do more of the trails, making this a workable Park Hopper plan even for those who want to do more.

While the asterisk needs to be added that your mileage may vary depending on crowds, this has been our repeated experience with an early or late arrival at Animal Kingdom in the last year-plus. Don’t expect similar results during the week of Independence Day or Thanksgiving, but on an average 7/10 or 8/10 day, this is perfectly doable. You can expect even better results if you get up at the crack of dawn to take advantage of 7 am Early Entry at Animal Kingdom. 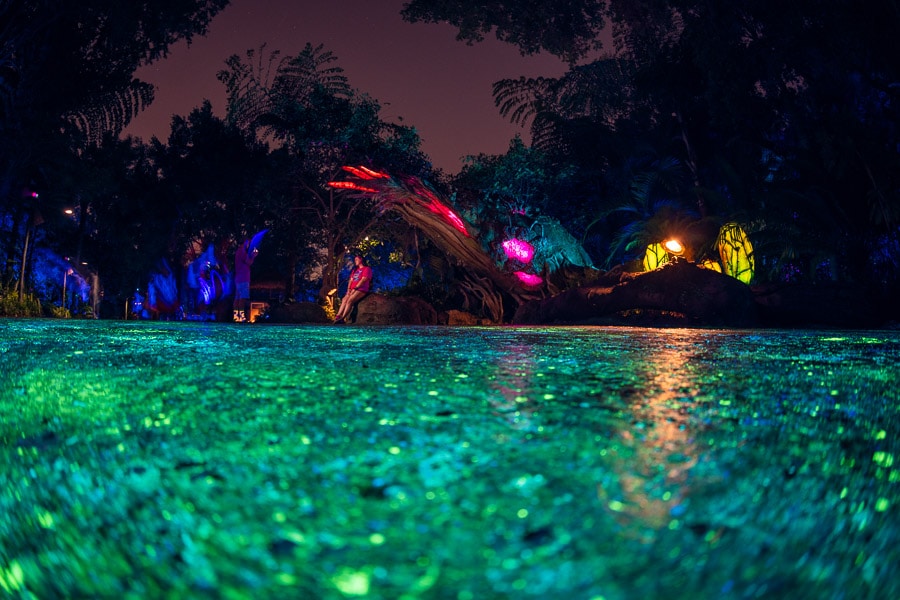 As a reminder, this is something we’ve stressed in other recent planning resources. If you want to know which approach is currently best for every park, see our recent Genie+ v. Savvy Standby Strategy at Walt Disney World. That details the best and worst ways to save time in lines, and is really useful if you’re overwhelmed and don’t want to read a dozen others!)

So long as you can do major attractions outside of the window between 10 am and 3 pm, Animal Kingdom is pretty easy on normal days at Walt Disney World. It’s gotten to the point that I don’t really see much value in buying Genie+ for Animal Kingdom at all, even on days you’re Park Hopping to or from another park. That is, unless you’ll be doing Animal Kingdom exactly when everyone else is, during that 10 to 3 window. Arrive early or late, and you will literally be better off without it!

Have you visited Animal Kingdom recently? Did you do Early Entry, rope drop, or a later arrival? Stay until park closing? Agree or disagree that you’re better off without Genie+ at Animal Kingdom so long as you avoid the middle of the day? What has been your experience with crowds and actual v. posted wait times at DAK? Thoughts on any topic discussed here? Do you have any questions about the current modified Animal Kingdom experience? Any questions we can help you answer? Hearing your feedback–even when you disagree with us–is both interesting to us and helpful to other readers, so please share your thoughts below in the comments!