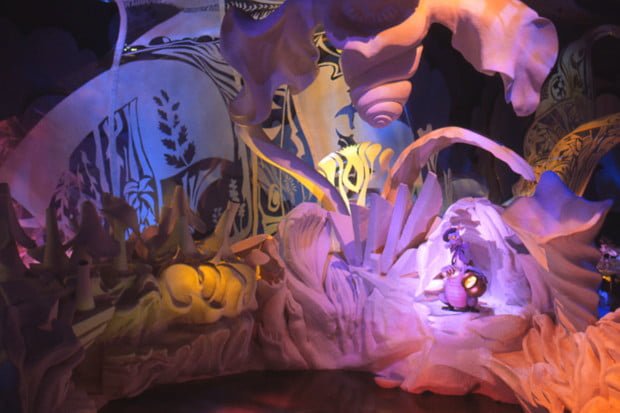 “Mix red and gold, from autumn flowers; purple and blue, from twilight hours. Green summer hills, and rainbows play a part. A painter’s brush, a work of art!”

The realm of art starts the second act of Journey into Imagination, as the first scene after flying alongside the Dreamcatcher and taking a brief tour of the Dreamport (if these words sound like gibberish to you, don’t worry–we’ll cover them in future FigmentFriday installments), the opening scenes that set the tone for the experience. This is known by many simply as “The Art Room,” even though it’s multiple areas within a single scene.

This was the first of five realms of Imagination, and here we encounter Dreamfinder on the right side of the ride vehicles to begin the scene. He has a giant paintbrush in hand and is wearing a smock as he delivers the melodic line above. Dreamfinder stands in front of an enormous “canvas” that was easily over one-story tall.

I’m uncertain of the exact technology used here, but the mural Dreamfinder was painting had a translucent front layer with abstract, wavy details of the forest scene to come on it, and backlit in such a way that the colors changed as it was lit in different ways. I doubt this was cutting edge technology even at the time, but the size of this piece of art coupled with dynamic colors made it hypnotizing. 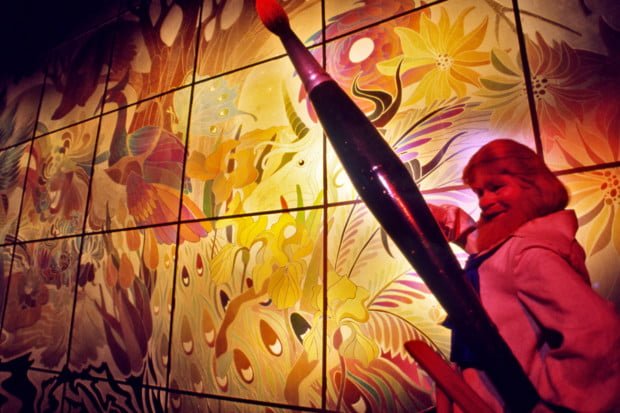 The original Journey into Imagination was masterfully staged, in a manner on par with Haunted Mansion. There was zero dead space, and each successive visual element drew your attention away from the last at exactly the right moment.

If anything, the Art Realm had so many captivating details that it could’ve been drawn out longer, but that’s probably true of each Journey into Imagination scene. I doubt many people got off of this thinking, “that’s it?” More like, “when can we see more of that?!” Definitely added to the re-rideability! 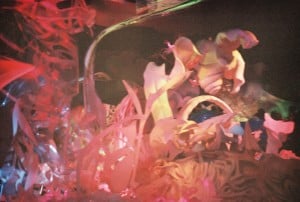 After passing Dreamfinder, guests entered an area that defies description. Ask 10 different kids who experienced this and you’d get 10 different accounts. Sitting here today, the best way I can think of to describe it is as an enchanted rainbow forest.

This area featured animals, trees, ponds, gardens, and even lily pads in a clean, abstract style that was reminiscent of origami. All of the designs were white, providing a blank canvas for the multi-color lights that washed over the backgrounds and creatures. 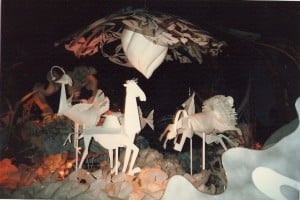 It was beautiful. The whole attraction could be described as captivating the imagination, but this really stuck with me, and it comes as no surprise looking back. As a child, venture out into nature was always mesmerizing, with light trickling through the foliage, beautiful scenery, and mysterious creatures lurking around every corner–both imagined and real.

This scene did look like a forest populated by the imagination, and the rainbow of colors made it all the more magical. Even though this was the Art Realm, for me the scene was defined more by how it evoked the natural world than art. That’s part of what made the original Journey into Imagination so special, as it captured the open-ended nature of imagination, rather than presenting a linear story open to only one interpretation. 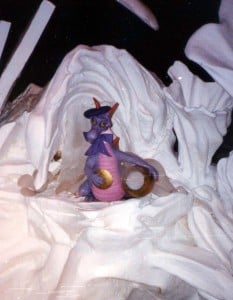 Towards the end of this area is Figment perched in a garden above a pond, holding a bucket out of which a rainbow appears, projected onto the white foliage behind him. This is the iconic image of the Art Realm, and one of the iconic moments of the attraction, in general. I remember viewing Figment as having painted this area with his rainbow, like an imaginative leprechaun. (Maybe that was the idea?)

While totally different in style and form, the only thing I’ve seen since that captures the same sense of awe as this scene (for me, personally) is the Great Forest in Princess Mononoke. Figment is like that film’s Forest Spirit: a beautiful creature in its own right, and one you also sense as creating/choreographing the entire scene. 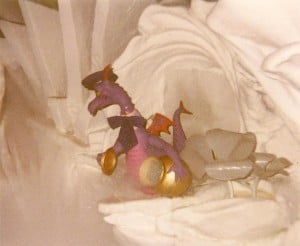 The photos here don’t really do justice to the Art Realm. Back in the days of film, without flash, it was difficult to capture detail in such low light. With flash, the moody lighting, integral to the ambiance, is overpowered.

Your best bet for doing the scene justice is watching Martin’s Ultimate Journey into Imagination Tribute (starting at 17:08):

Hopefully this video and these photos, along with my description, begins to paint a mental impression of just how enthralling and stunning the Art Realm–and the entire Journey into Imagination–was for those of you who never experienced it (or was a fun stroll down memory lane for longtime fans). Although technology has changed, the spirit of imagination that fills children of all ages has not. Journey into Imagination could once again captivate guests in such a manner if restored to its former glory.

Do you remember The Art Realm? What did you think of it? If you didn’t experience the original Journey into Imagination in person, what’s your take on this realm as experienced via the wayback machine of the internet? Share any thoughts, questions, or additional info you have in the comments!