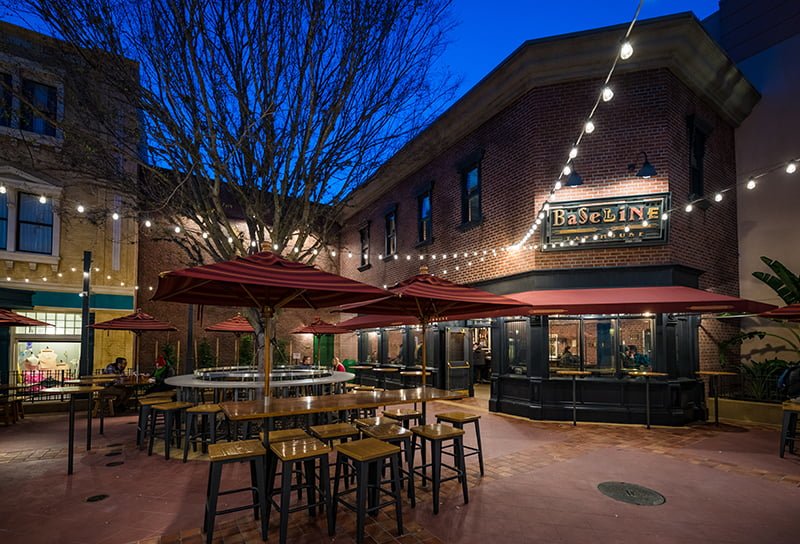 BaseLine Tap House is a bar, lounge, and quasi-counter service restaurant in Hollywood Studios at Walt Disney World. In this WDW dining review, we’ll share food photos, thoughts on ambiance, beer value for money, and why this has become a favorite hidden gem among many Walt Disney World fans. (Updated July 18, 2020.)

Now that Disney’s Hollywood Studios has reopened following a 4-month closure, BaseLine Tap House is also one of the very best spots in the park to do a light meal or grab drinks. This is the case for a couple of reasons. First, aside from the exceptional Docking Bay 7 in Star Wars: Galaxy’s Edge, most counter service restaurants and snack stands either are not operating or have significantly scaled back menus.

Second, BaseLine Tap House has a lovely outdoor seating area. While most counter service restaurants at DHS offer the same, none of the park’s table service restaurants do. This means that if you want to mitigate your risk and dine outside, BaseLine Tap House is essentially your most ‘upscale’ option at Disney’s Hollywood Studios for that. (See our List of the Best Restaurants with Outdoor Seating at Walt Disney World for more info.)

I’ll admit that when BaseLine Tap House was first announced along with the rest of the Grand Avenue project, I wasn’t “feeling it.” It’s not that I was disgruntled about losing fan-favorite, the Writer’s Stop. It was that this overhaul effectively killed my dreams of a more elaborate Muppet Courtyard.

In addition to that, the theme and concept art for BaseLine Tap House never did much for me. The bar’s backstory is that it pays homage to the building’s former life as the Figueroa Printing Company, a mom-and-pop print house that had ties to the Walt Disney Studios in Burbank. Unlike the rest of the park, the land/ave is set in present-day Downtown Los Angeles. 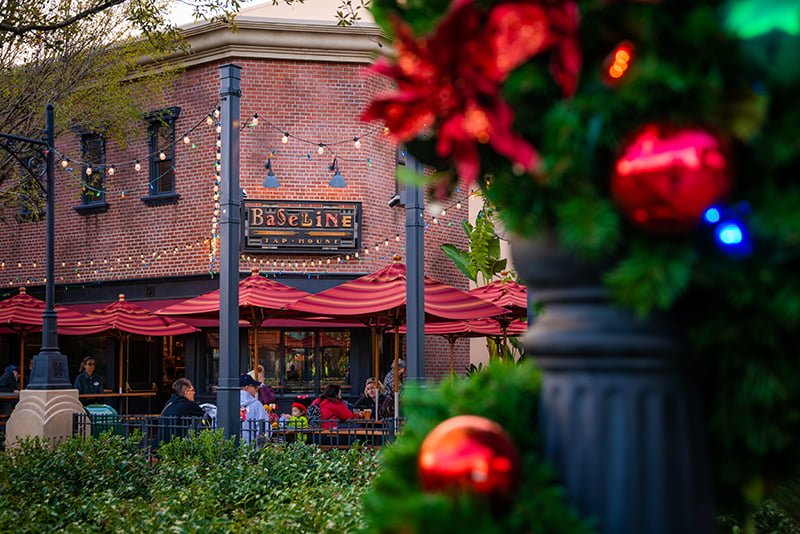 Baseline Tap House has indoor and outdoor terrace seating, and this is what ultimately turned things around for me with regard to BaseLine Tap House. While I still think the theme and backstory are bland and uninteresting, the atmosphere back here is sublime.

Sitting below those popcorn lights on a cool evening is wonderful, especially as guests leave this area of Disney’s Hollywood Studios. For now, BaseLine Tap House is a hidden gem both in location and in terms of what’s served. 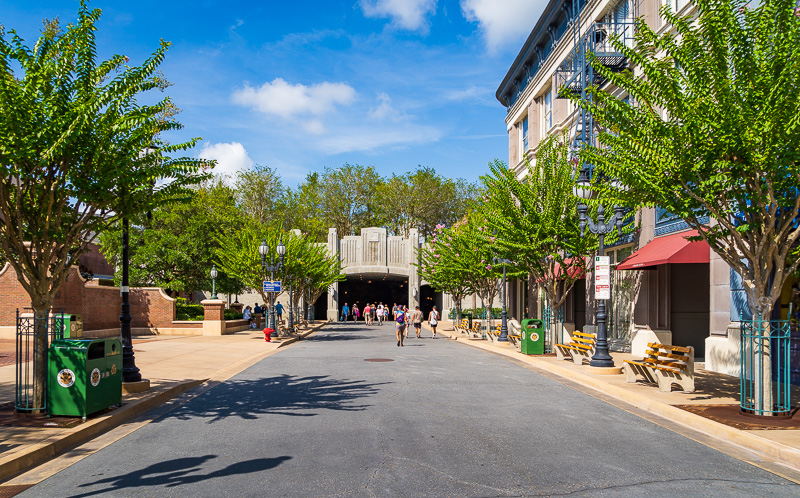 BaseLine Tap House is nestled between Sci-Fi Dine-In Theater and the former Streets of America, directly across from the entrance to what used to be Muppets Courtyard, where MuppetVision 3D and PizzeRizzo are found. 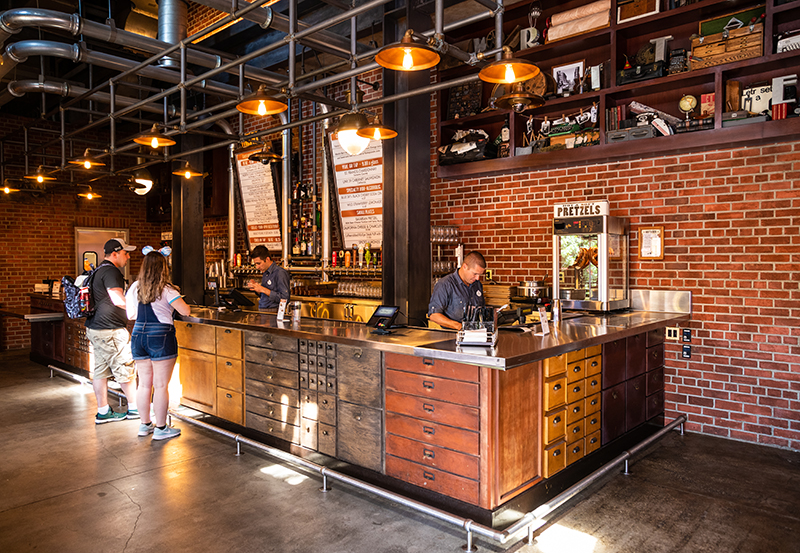 Thankfully, that never happened. Even with the peak popularity of Star Wars: Rise of the Resistance, BaseLine Tap House remained a relatively low-key and under the radar spot for an afternoon or evening meal and drinks. 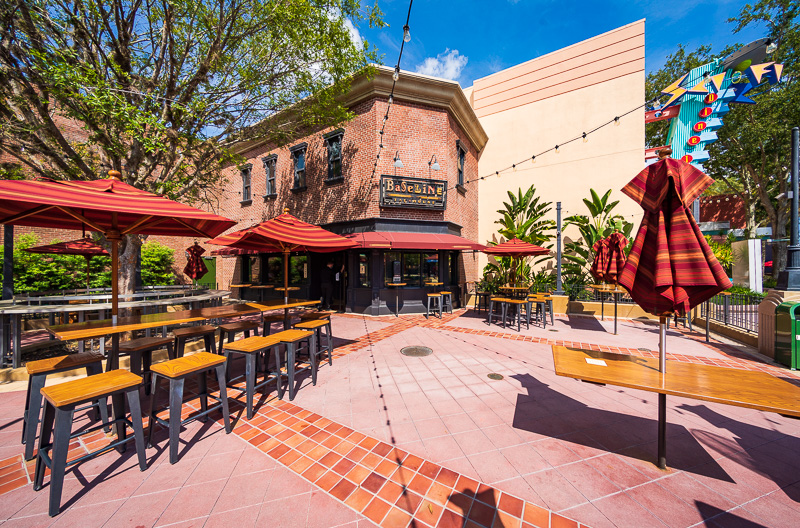 As we cover in our new Disney’s Hollywood Studios Reopening Report: A Tale of Two Visits, that’s true even post-reopening, with the outdoor seating area operating at a reduced capacity to accommodate physical distancing.

It really is amazing how BaseLine Tap House manages to hide in plain sight. Despite being one of the best dining & drinking spots in the park, it’s seldom busy. (Not that we’re complaining!) 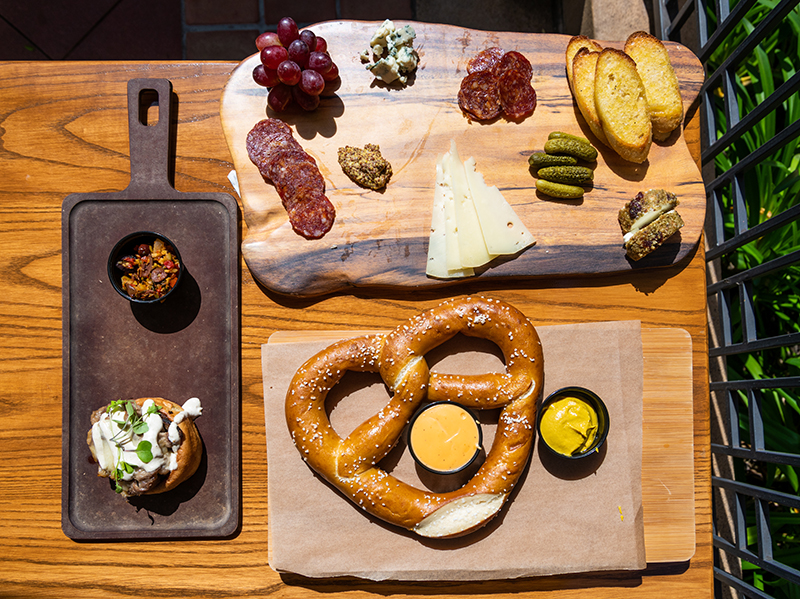 Here’s a look at all of the food on the menu at BaseLine Tap House.

You might recall that in our Best Snacks at Disney’s Hollywood Studios post, one of the entries was “Anything at BaseLine Tap House.” So that might’ve been a bit of a spoiler as to how this review would go. Sorry if you like to be surprised. 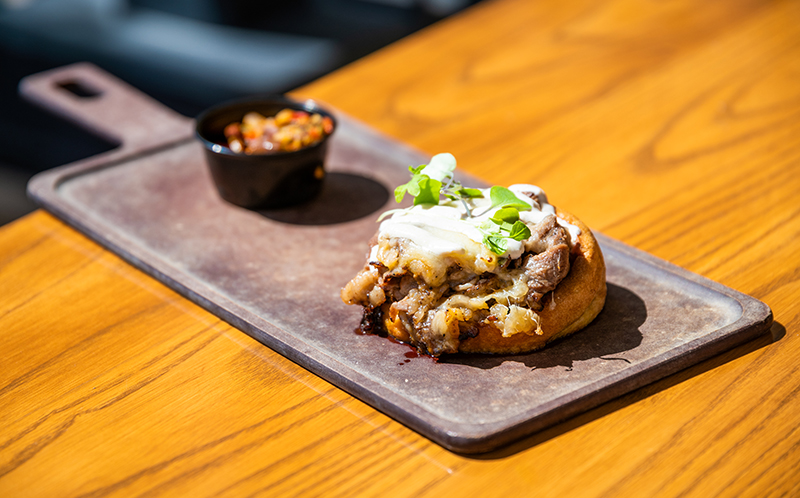 First up is the Coffee-rubbed Rib-eye Steak Puff with Olive Salad. If we are considering BaseLine Tap House to be a counter service restaurant, this is the best counter service entree in Disney’s Hollywood Studios.

The meat was tender and bursting with flavor, albeit a bit on the fatty side for ribeye. There was a mild hint of coffee, but with so much going on that was hardly noticeable. The creamy horseradish sauce added more of a punch than anything, and the delicious, semi-sweet pastry puff brought everything together perfectly. Think of this as a really messy, really delicious “artisanal” open-faced steak sandwich and you’ll have the right idea. 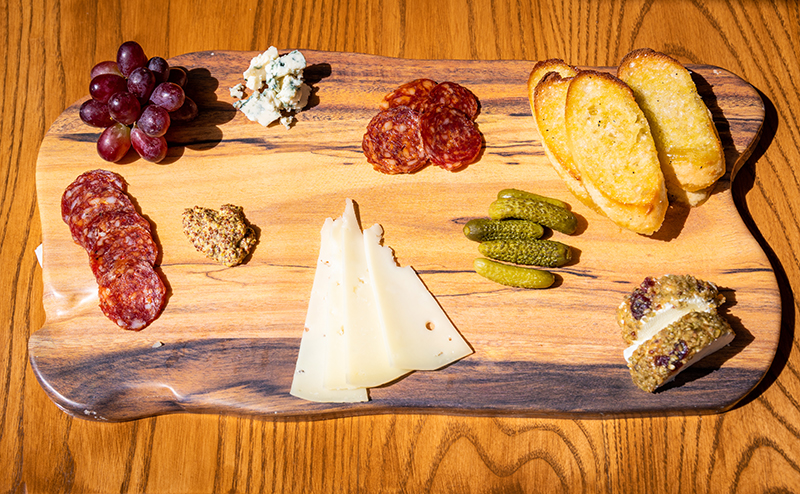 This is a fun assortment of meats and cheeses, delivering some surprising quality on the cheese front. Sarah found the meat to be a bit on the fatty/greasy/processed side, but I thought it was delicious. The presentation is great, too. Far better than something you’d get at Food & Wine, and for less money. 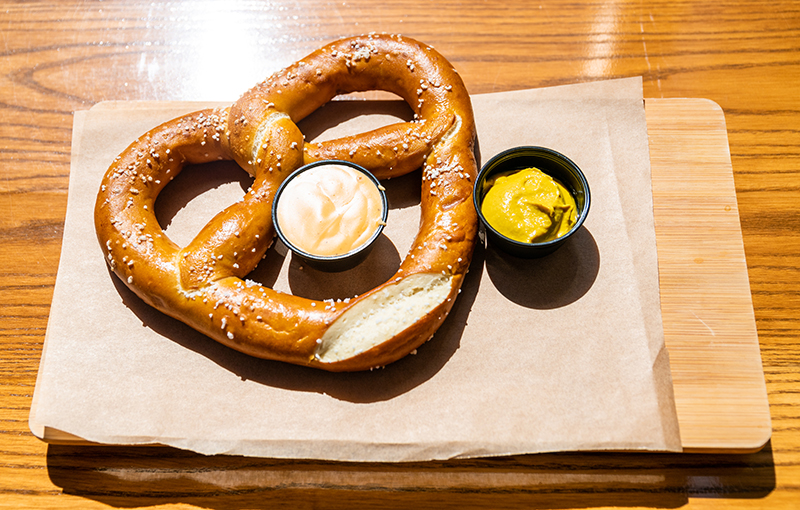 Finally, the Bavarian Pretzel with Beer-Cheese Fondue and Spicy Mustard. This is up there with the pretzel in Germany as Walt Disney World’s best. Honestly, you can’t go wrong with any of these items. My first choice (in a landslide) would be the Steak Puff, and the second two items would be roughly a tie, depending upon my mood.

The only thing on the food menu we did not–and would not–order is Almonds. I once made what I thought was a harmless, in-good-fun joke about the Central California Almond Growers Association on this blog. In response, I received an irate message. Now that I know I’m under surveillance by CCAGA operatives, I won’t be making that mistake again, let me tell you! 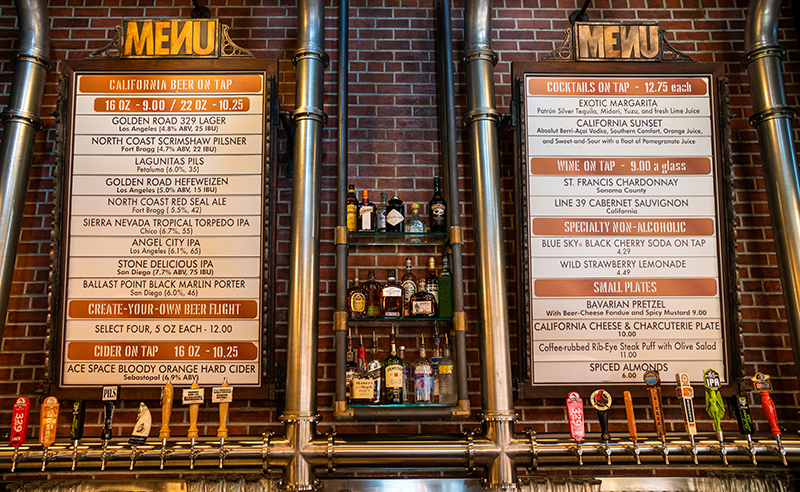 Among Walt Disney World fans in the know, BaseLine Tap House scores big points for its beers on tap. Not only is there a good variety of California beers, but a 22 ounce draft is $10.25, which is pretty solid by Walt Disney World standards–especially when you consider that this is craft beer. In his review, Josh at easyWDW does a good job of breaking down each beer on tap and making recommendations.

Overall, BaseLine Tap House is a great place to spend a relaxed afternoon and early evening after finishing up the highlights of Disney’s Hollywood Studios. This is thankfully true even after Star Wars: Galaxy’s Edge opened. BaseLine Tap House has managed to retain its low-key charm, even with significantly increased foot traffic and an influx of guests to DHS. Perhaps because the building and seating area is fairly nondescript, most guests simply pass by BaseLine Tap House while scurrying to Star Wars or Toy Story Lands. Don’t make the same mistake as everyone else: stop here and savor the setting–and the delicious menu!

Have you tried BaseLine Tap House? Any favorite foods or beers on tap here? Do you agree or disagree with our review? Any questions we can help you answer? Hearing your feedback–even when you disagree with us–is both interesting to us and helpful to other readers, so please share your thoughts below in the comments!