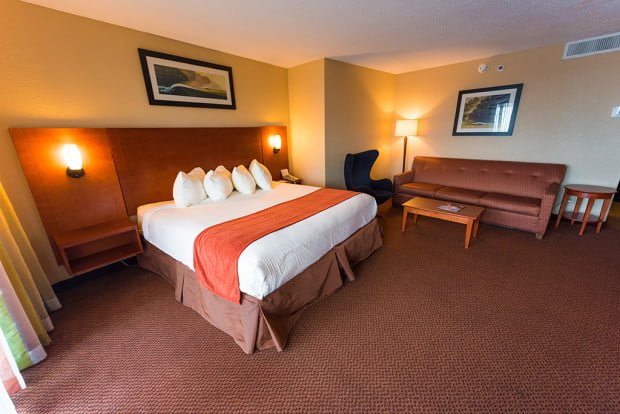 Best Western Lake Buena Vista Resort is a hotel at Walt Disney World’s Disney Springs. This review covers my recent stay at the hotel, featuring photos of rooms and hotel amenities. While other hotels near Walt Disney World have really surprised me–some good surprises, others bad–this Best Western is pretty much exactly what you’d expect from a Best Western.

The Best Western is a solid, 3-star hotel that I’d say is slightly better than a standard Best Western, and seems like some parts of the hotel have probably received a light refresh in recent years. It’s not exactly chic or trendy, but it’s also not at all dated. It’s simply a good hotel that offers nice accommodations for a fairly reasonable price given its location.

August 2018 Update: A new permit application has been filed for a new “Black Lake Hotel” project on the site of the current Best Western Lake Buena Vista Hotel (which is situated on Black Lake). Drury Hotels, the new owner of the hotel, is apparently preparing to build a new tower and new pool, and renovate the existing tower of the Best Western. It’s unclear whether the resort will be rebranded during this time, and how the construction will impact guests, but the project should start by 2019. Stay tuned…

For now, this hotel is an above-average Best Western. That’s hardly a knock, and in some key ways, it’s actually surprisingly good. It just isn’t the kind of place that really will wow you or become a “hidden gem” of a hotel (like the Hilton Orlando Buena Vista Palace) that you find yourself excited to revisit every year.

I know that doesn’t make for an exciting review that you feel compelled to read, but the Best Western does have plenty to offer and perhaps there is even about the founders of this hotel. Could they have been Stonecutters? Van Buren Boys?! Blainetologists?!!? You’ll have to read on to find out… 😉 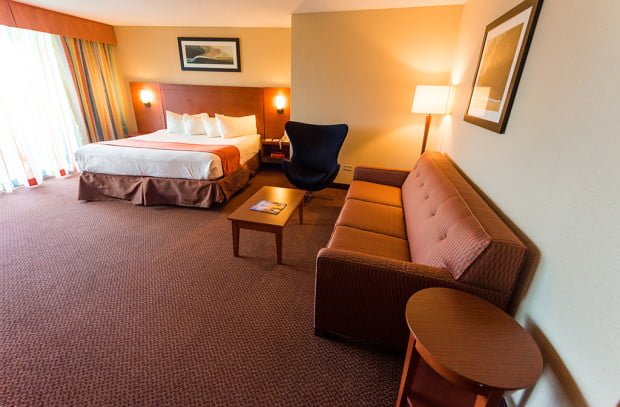 The guest rooms have a pretty standard look, going for more of a basic, timeless style that won’t be showing its age in a couple of years.

There’s really nothing wrong with this “safe” look, and to the credit of the Best Western, the room is clean and roomy. 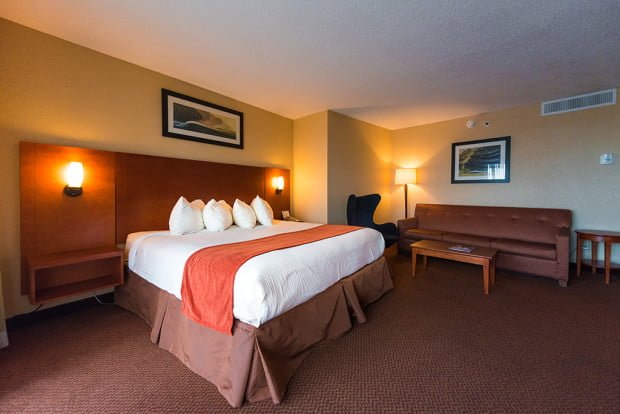 Most importantly, the bed is incredibly comfortable as are the pillows. I’m not sure what type of mattress is used in the rooms, but it’s definitely a nicer quality one.

Not quite pillow-top caliber or one of the super-plus but gimmicky-named “sleep systems” at one of the luxury major brand name hotels, but more than you’d expect from a 3-star Best Western. For me, this was the highlight of the hotel, and it’s certainly not a bad aspect of the hotel experience to be the highlight. 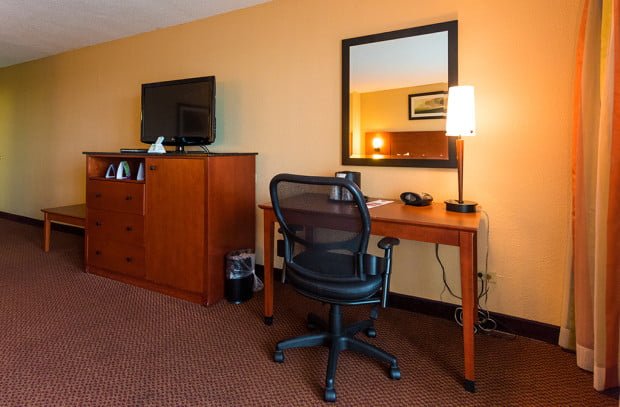 The desk, television, chair, etc. (everything in the above photo) are all pretty standard. Nothing special or disappointing here. Moving on… 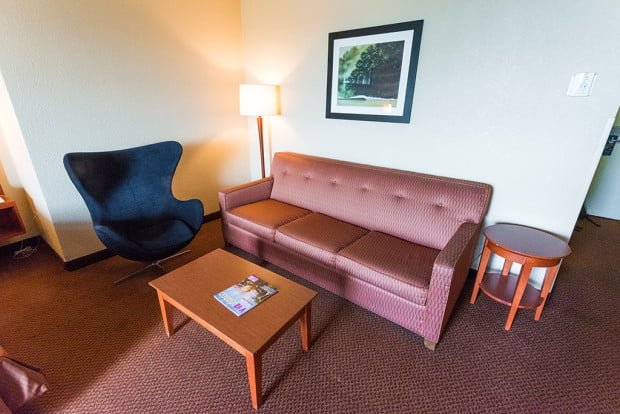 The chair adjacent to the couch seems like an after-the-fact addition, as it’s kind of out of place as compared to the rest of the room, but it’s comfortable and looks nice, so no complaints there. The couch is another average aspect of the room. 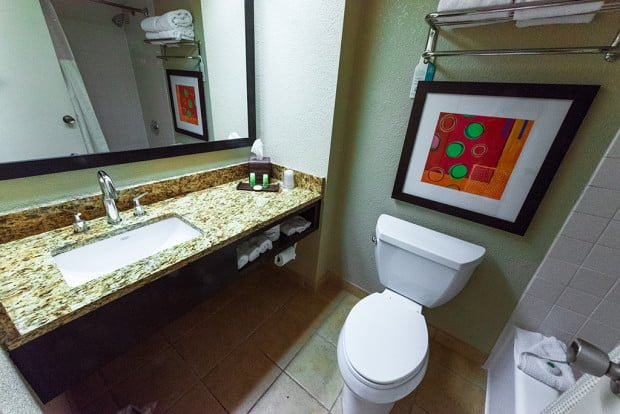 Likewise, the bathrooms are pretty basic. There is a recessed basic sink and some modern art that you can enjoy while doing your business, so I guess it’s slightly above average. Otherwise, pretty basic. 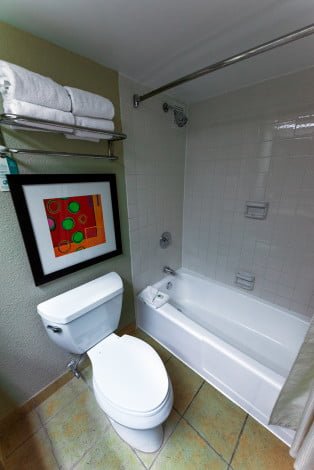 It does seem like the bathroom might have been updated at some point in the last few years (basin sinks became trendy not too long ago, it seems), so I was a little disappointed that there’s a tub, but the vast majority of hotels near Walt Disney World have tubs rather than tub-less showers. 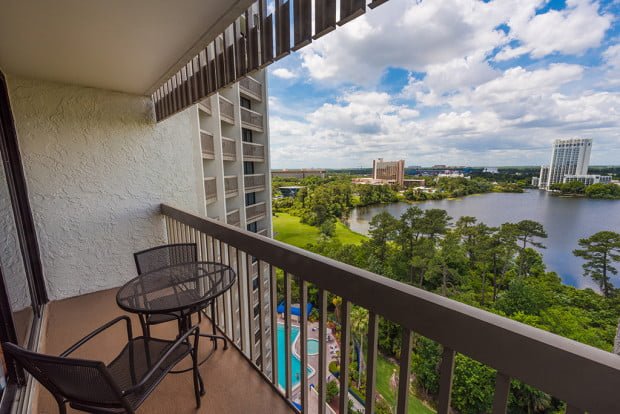 I’d hazard a guess that if you have a high floor, you are pretty much guaranteed a good view of something, whether it’s Disney Springs, Saratoga Springs Resort, or Epcot. Elevators here are efficient, so don’t be afraid to request a higher floor. 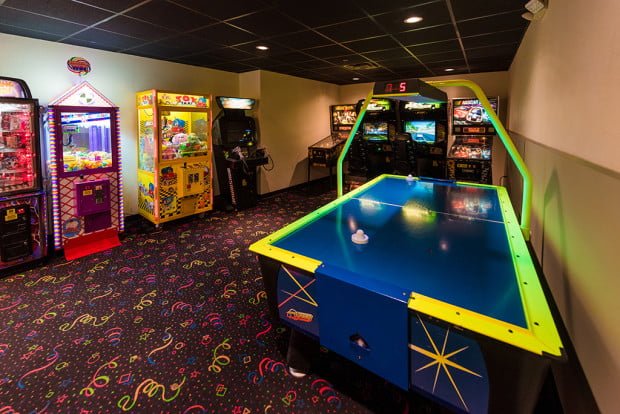 The arcade felt like stepping into a time machine back to the mid-1990s. Just check out the neon and rad swirls on the carpet. I have yet to find an arcade at a hotel that I wouldn’t describe as feeling like the 1990s. I think this is the last time I’ll even mention a hotel arcade in a review, as I don’t see how this is in any way helpful… 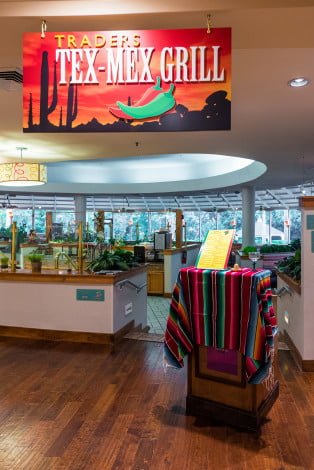 There’s a restaurant in the lobby that serves what seem like pretty reasonably priced meals–I did not eat here, so I can’t speak to its quality. There’s also a bar, heated pool, Disney store, gift shop, and car rental desk in the lobby. Not too shabby of an amenities slate here. 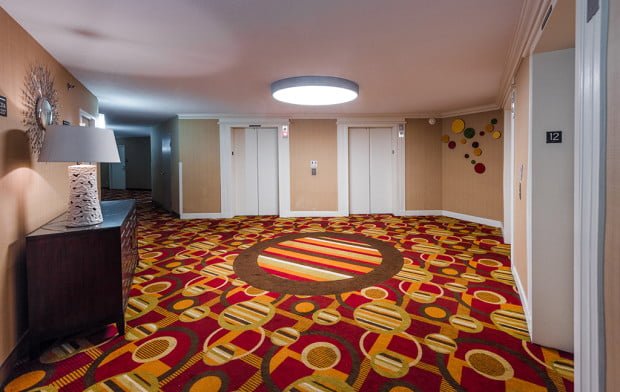 The biggest upside of this hotel is price. It’s frequently in the $80/night rack rate range (full disclosure: my stay was comped), with specials on various booking sites helping to sweeten the deal (right now there’s a special that includes free table service breakfast for 2). There’s also free parking and WiFi, which you won’t find at all of these hotels.

Unfortunately, like so many of these other Disney Springs area hotels, this Best Western charges a $14/night resort fee. A resort fee here?! Go home, Best Western hotel, you’re drunk. In all seriousness, these resort fees are a little more palatable when the place charging the fee is able to advertise how many acres on which it is located, the number of tennis courts it has, or other characteristics of…ya know…an actual resort. This Best Western is–unequivocally–an ordinary hotel. It’s charging a resort fee because other hotels in the area are charging them, making resort fees in Orlando “the new normal.”

I hope consumers take issue with this. The FTC has, repeatedly asserting its position that the practice of charging resort fees is unfriendly to consumers, and has admonished some hotel owners for the practice. (Some consumer watchdog groups believe the FTC is not doing enough. I’d tend to agree, given that these fees are on the rise.) 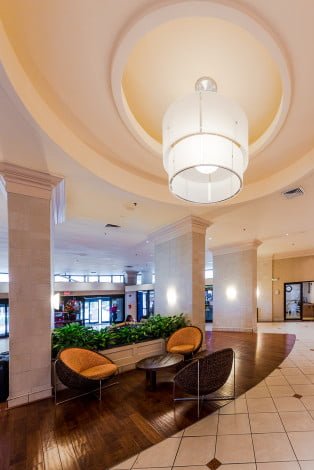 Overall, resort fees aside, I think the Best Western Lake Buena Vista is a hotel that is worthy of your consideration if you want a good location and solid accommodations, but don’t want to break the bank (and aren’t concerned about Disney theming). The location is great, the rooms are better than expected, the amenities are strong, and there are some modern flourishes in common areas that give the hotel a bit of an upscale feature.

It’s a somewhat of a pleasant surprise as an above-average 3-star Best Western that doesn’t just rest on the laurels of its location. It wouldn’t be my first choice in the Disney Springs area but it’s a good choice, nonetheless. Oh yeah, I suggested up front that this Best Western might have been founded by several different fictional organizations. I really have no idea who founded it. Whatever the current management, they are doing a great job!

Have you stayed at the Best Western Lake Buena Vista hotel? Are you a fan of this hotel, or do you prefer something else in the Disney Springs-area? Considering this hotel? Have any other thoughts or questions–please share in the comments below!