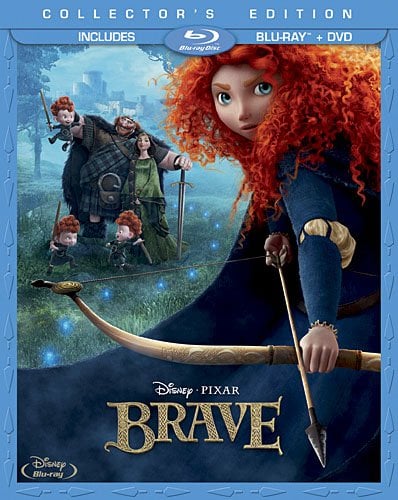 Seemingly like clockwork, Pixar releases an excellent new movie in the summer, and follows with an excellent Blu-ray set in the winter. Or at least, up until last summer, when Cars 2 debuted. The trend continued with Brave (Blu-ray Link) this year. Unlike Cars 2, Brave wasn’t downright bad, but it was not up to Pixar’s usual standards. In fact, it’s not nearly as good as Wreck-It-Ralph, this season’s film from the Walt Disney Animation Studios, which is seeing another renaissance.

My main qualm with Brave is that it panders. Possibly because of some dark moments, it interjects a great deal of juvenile humor into the film, something abnormal (at least to this degree) in Pixar films. Some may not take issue with this, perceiving animation as “for the kids,” but Pixar has perfected the mainstream animated “adult” film, and Brave just doesn’t have that feel. In fact, it’s hard to believe that the same people who made Wall*E made Brave. Beyond the humor, the story is formulaic and predictable, and the characters play to stereotypes, right down to Merida, who is an “anti-Princess,” I suppose.

Brave is far from a bad movie. It’s really pretty good. But if you’re expecting normal Pixar quality, you might be disappointed. If you’re buying it for kids, fear not, as they will undoubtedly love it, as it’s pretty clear they’re the target audience (boys and girls alike).

Best Buy should be using this film to show off the Blu-ray format and highlight the quality of their home theater systems. ‘Nuff said.

There’s a litany of extras in this release, and most are pretty good. The commentary offers an interesting analysis of the process of creating the film, the nearly hour-long ‘making of’ is divided into 8 subparts that each cover a specific aspect of the film rather than painting in broad, generic strokes (the moss one has got to be the most fascinating), and a variety of other shorter extras. All told there’s about two hours of material here, plus the commentary tracks. Most importantly, all of the extras here are relevant to the film, as opposed to some random extras Disney has been packing with their re-releases to bolster the extra count as of late.

Overall, Brave isn’t a masterpiece. On the same note, it’s not bad, either. It all depends upon your baseline. If you’re a student of animated films, it’s an okay entry, not really memorable and certainly not a film that will leave a lasting impact on the genre. If you’re a more casual fan of animation and are comparing it to the animated films produced by other studios, it’s pretty solid. If you’re a parent looking for a film that will entertain your kids, the Brave Blu-ray is a clear winner. As far as the quality of the Blu-ray release, it’s an absolute winner. The audio and video quality are flawless. The soundtrack booms and bellows, with great use of all channels and LFE. The video is pristine, with vivid detail (you could get lost in Merida’s hair), great black levels, and gorgeous textures.