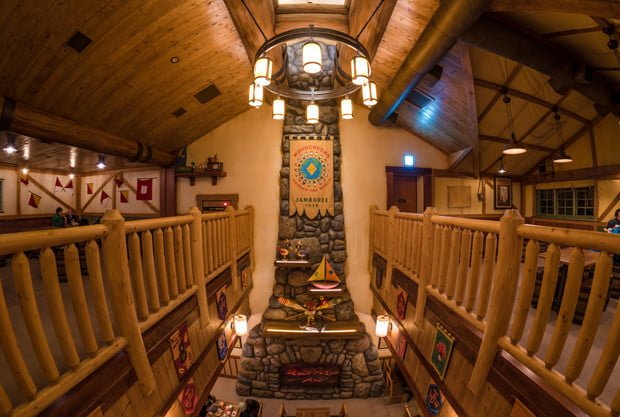 Camp Woodchuck Kitchen is a new counter service restaurant at Tokyo Disneyland themed to Huey, Dewey, and Louie and the Junior Woodchucks. The menu includes s’mores and other campfire favorites (although I don’t ever recall making waffle sandwiches in my Boy Scout days). In this review, we’ll take a tour of this cool new dining spot, and offer thoughts on whether it’s worth eating here.

Camp Woodchuck Kitchen replaced Lucky Nugget Cafe, which was nothing noteworthy: it was simply ordering windows and a covered seating area off to the side of Big Thunder Mountain Railroad in Frontierland. Honestly, it always struck me as an afterthought–a really limited menu and a small seating area as an overflow in case nearby Hungry Bear Restaurant was too busy.

Camp Woodchuck Kitchen uses the same ordering windows and has a similarly limited menu, but is worlds better than Lucky Nugget Cafe. It replaces the basic covered seating area with a multi-story indoor/outdoor mess hall that includes ample seating and a meet & greet.

Suffice to say, Camp Woodchuck Kitchen is a big improvement over what was here before, but that doesn’t mean it’s worth your time given the stacked restaurant lineup at Tokyo Disneyland. Let’s take a look inside… 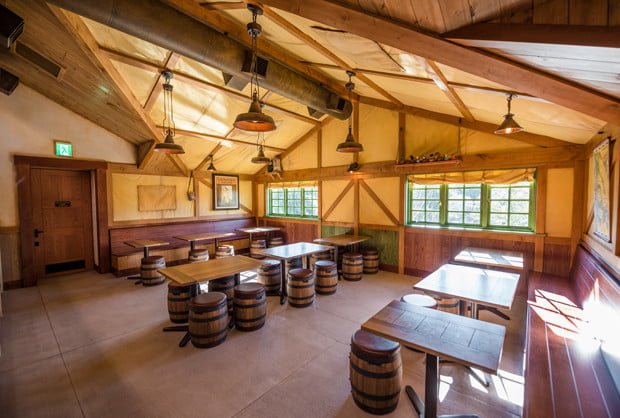 If you ever went to Scout Camp, this restaurant should look familiar. Well, perhaps an infinitely nicer version of what you experienced, but along the same lines.

Camp Woodchuck is where the Junior Woodchucks (an organization that itself is a sendup of the Boy Scouts) attend summer camp. As with other summer camps of this style, there are activity areas, trails, recreation, and–of course–a mess hall. 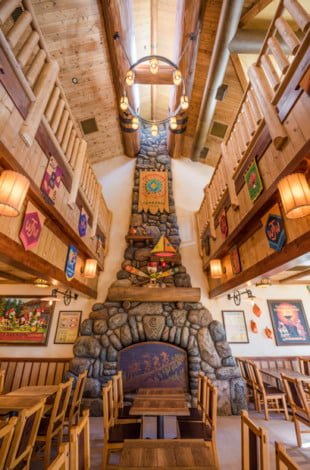 Camp Woodchuck Kitchen fulfills the purpose of the mess hall for the Junior Woodchucks. Except a lot nicer. Perhaps it’s modeled after a Scout Camp somewhere in the Santa Monica Mountains where wealthy residents of Beverly Hills send their kids. I know we didn’t have anything nearly this nice in rural Michigan!

Of course, I’m kidding. I really would not expect Disney to give a restaurant a musty smell, feature very basic finishings, and have its interior be truly rustic & primitive. As with all things Disney, this is an idealized version of a summer camp mess hall. In actually, it feels like a mix of a National Park Lodge and a summer camp mess hall. 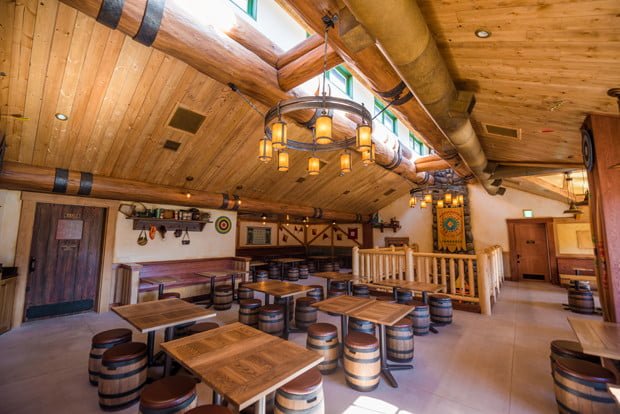 Camp Woodchuck Kitchen eschews textural depth and detail to some degree in favor of Junior Woodchuck decorations. The approach makes sense. It’d be odd for a summer camp mess hall–places that are universally utilitarian–to have layer upon layer of detail. 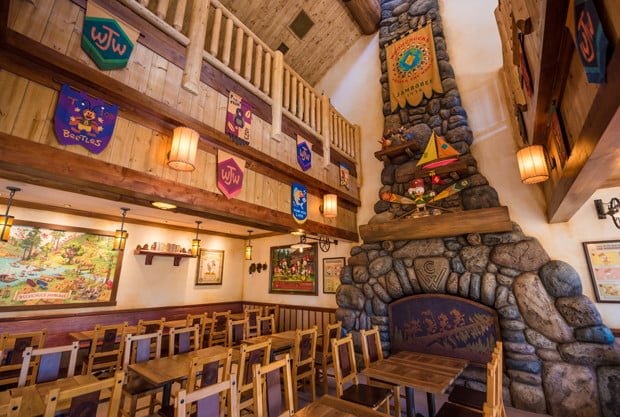 It’s also really cool to see all of the Junior Woodchuck paraphernalia. There are a lot of Easter eggs and hidden references to be spotted, some of which I’m sure I missed.

I’d say the Imagineers who created Camp Woodchuck Kitchen did an exemplary job with the design here–this is the pinnacle of what a themed mess hall can be. Just because it’s not as engaging thematically as Grandma Sara’s Kitchen does not mean it’s bad. It’s a concept that has a lower thematic ceiling, to begin with. 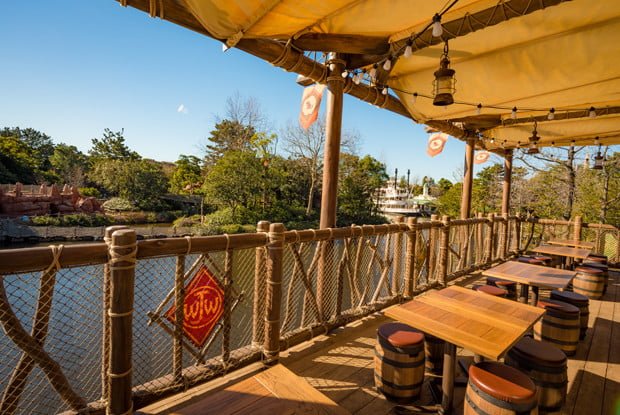 The best Tokyo Disneyland restaurants are also the most popular (as you’d expect), and aren’t exactly places you’d go as a respite from the crowds or to unwind after a long day. Camp Woodchuck Kitchen is exactly that.

From the fireplace inside to a faux fire pit outside (I soooo wish it produced actual heat during this winter trip) to just random tables tucked away in corners, Camp Woodchuck Kitchen is a great place to be. 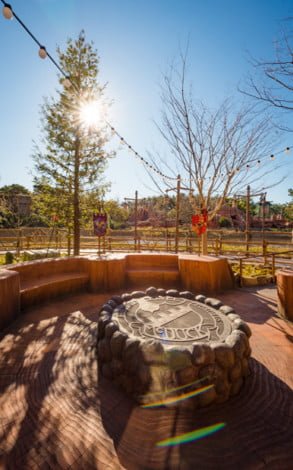 This is furthered by two excellent background music loops. The exterior loop can be found here, and features folksy instrumental versions of Disney (and other) songs you’ll recognize.

The interior loop features music of the same nature, but with lyrics and without a Disney connection. Both loops are tremendous and made me want to hang around for a while. 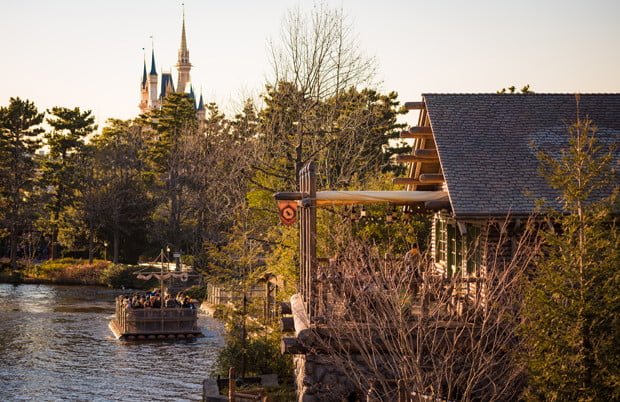 The vibe here is the same as that of Hungry Bear Restaurant at Disneyland (well, prior to the Rivers of America refurbishment), and that restaurant is one of my favorite places in Disneyland due to that serene atmosphere. 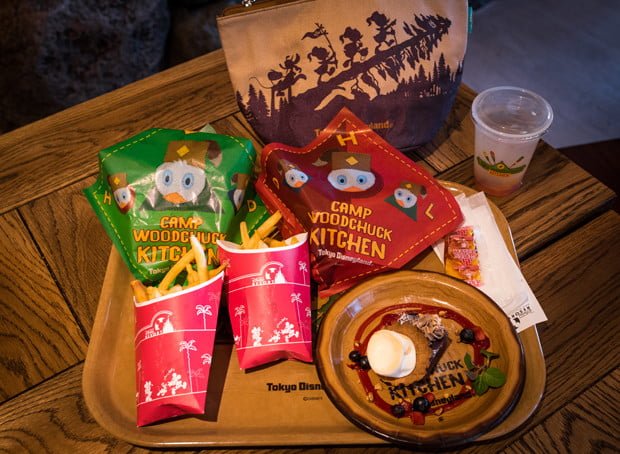 Alright, let’s turn to the food now. Although there’s not a ton on the menu, there are some good options.

One thing to note from the outset is that all of the waffle sandwiches here are on the small side. Even with fries, you’re looking at something that’ll be filling for only the smallest of appetites. To the extent that we recommend Camp Woodchuck Kitchen, we recommend it as an afternoon or late night snack–not lunch or dinner.

With that said, let’s take a look at what’s available… 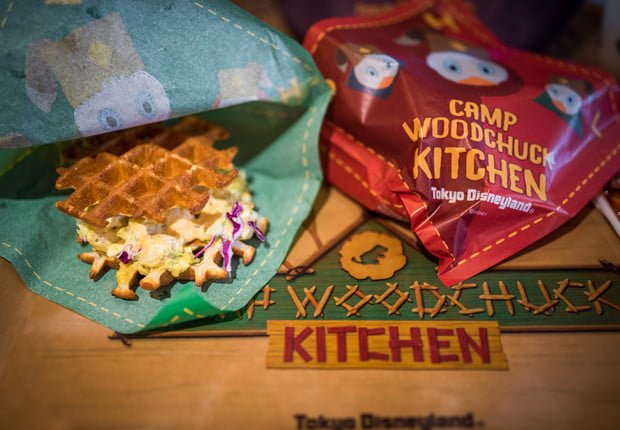 First up is the Shrimp with Avocado Waffle Sandwich. This is basically seafood salad, with a liberal amount of dressing to tie it all together.

I liked the taste of the sandwich, but there was a bit too much dressing for my taste (a complaint that could apply to ‘____ salad’ sandwiches universally in Japan, so watch out if that’s not your thing). 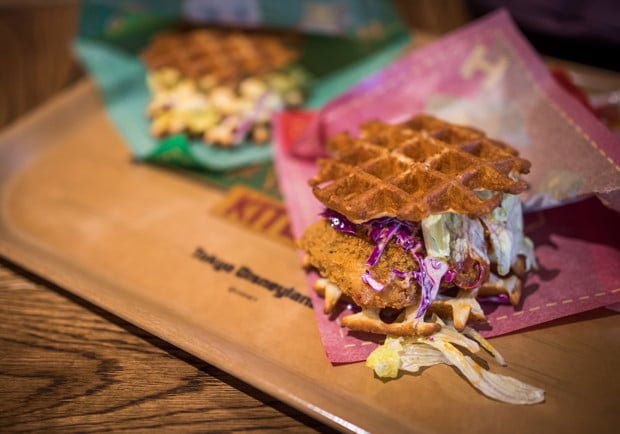 We both agreed that the Maple Fried Chicken Waffle Sandwich was significantly better. Chicken and waffles just go together, and the maple sauce is more conservatively applied to really bring the dish home.

This is also more filling, with a relatively generous portion of chicken. 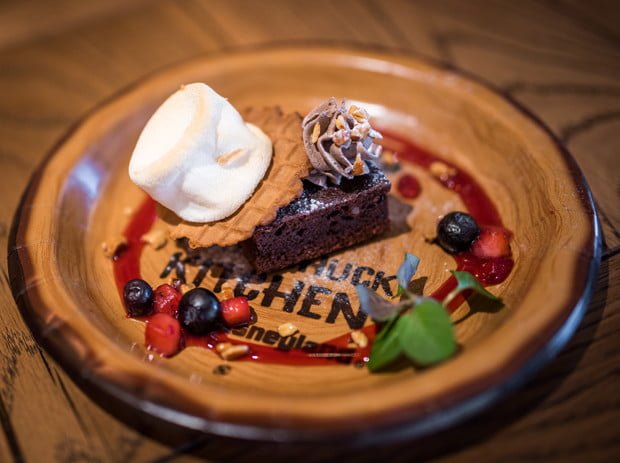 For dessert, we had the S’mores Chocolate Brownie, which was fine. As you can see, the presentation here is exceptional, but the portion was small and there was nothing particularly noteworthy about this dessert. 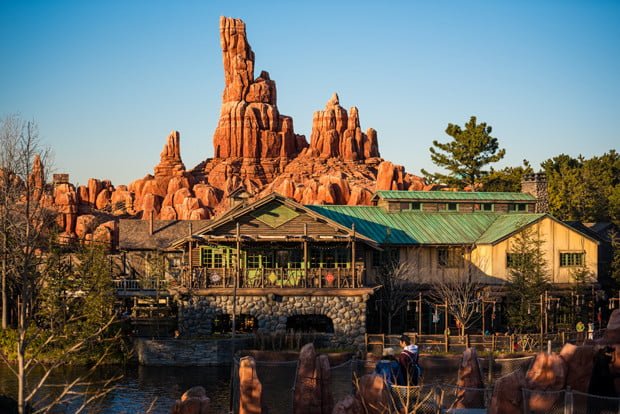 If you’re going in the next year or so and want merchandise aside from the generic character stuff, be sure to check this out. It won’t last forever. 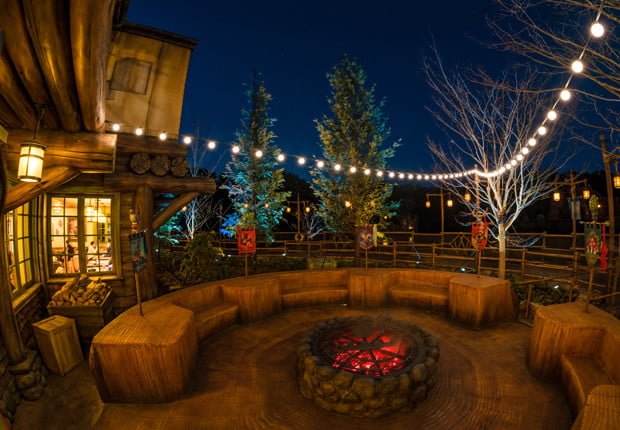 Ultimately, Camp Woodchuck Kitchen is an excellent addition to Tokyo Disneyland’s dining scene. It’s an unequivocal improvement over what was here before, even if it’s best viewed as a snack spot or light meal. While it’d be nice to have a more expansive menu, the joy of this location is largely in the ambiance, particularly outdoors sitting along the Rivers of America. is one of the best counter service restaurant at Tokyo Disney Resort. If I were to update our Top 10 Tokyo Disneyland Counter Service Restaurants list, I’d slot it in at #7, as a must-do for an evening snack.

If you’re thinking of visiting Japan for the first time and are overwhelmed with planning, definitely check out our Tokyo Disney Resort Planning Guide. It covers much more than the parks, from getting there to WiFi to currency and much, much more. For more photos and an idea of what we did day-by-day during our first visit, read our Tokyo Disney Resort Trip Report (that should be helpful if you’re planning a first visit of your own).

What do you think of Camp Woodchuck Kitchen? Where does it rank in terms of dining at Tokyo Disneyland for you? Any cool Junior Woodchuck references you noticed in the decor? Have any menu recommendations here? Any questions? Hearing from readers is half the fun, so please share your thoughts in the comments!