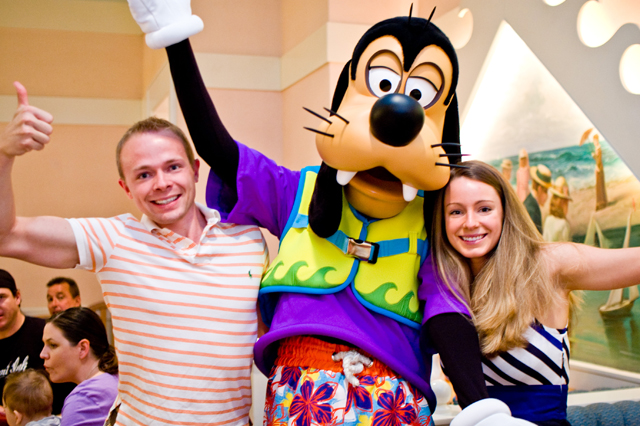 Cape May Café is located in Disney’s Beach Club Resort at Walt Disney World. This post reviews the all-you-can-eat Minnie’s Beach Bash Character Breakfast, which features Goofy, Donald Duck, Daisy, and of course, Minnie Mouse. Here, we’ll share thoughts on whether this character meal is worth the money, and provide thoughts on food and character interactions. (Last updated June 17, 2018.)

As noted, Cape May Café serves all-you-care-to-eat buffet cuisine in an airy oceanside atmosphere at Beach Club Resort. Minnie’s Beach Bash Character Breakfast participates in the Disney Dining Plan. It also accepts the Tables in Wonderland card for a 20% discount. Like most character breakfasts, it’s not a good value on the Disney Dining Plan, but it’s not a terrible value, either, especially with kids.

Minnie Mouse and “and her friends” which are almost always Goofy, Donald, and Daisy Duck (although that’s advertised as being “subject to change”) meet and greet guests during this Disney Character Dining experience, which serves a variety of breakfast favorites, including Mickey Waffles, a fresh fruit and yogurt bar, fresh-baked pastries, breakfast pizza, biscuits and gravy, and other options.

We’ve visited Cape May Café a few times, including on our honeymoon when we stayed at Disney’s BoardWalk Resort. We first began dining here out of necessity, because we wanted to do a character meal but couldn’t grab reservations anywhere else.

Since, we’ve found that it’s one of the best character meals on Walt Disney World property, with great breakfast food variety, fun costumes for characters we like, and a lack of crowds as compared to more popular options like Chef Mickey’s or ‘Ohana (or literally anything in-park). 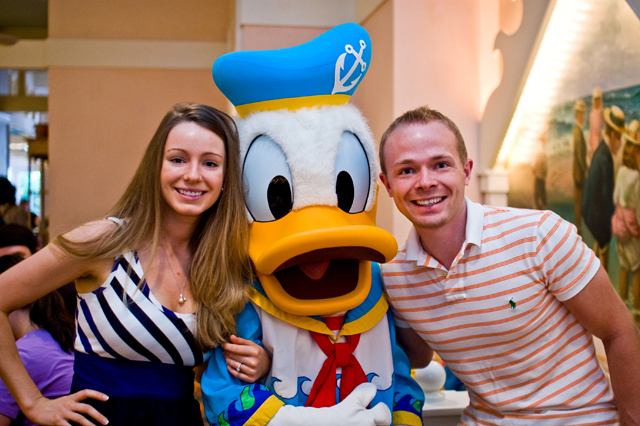 Like the rest of Disney’s Beach Club Resort, the ambiance and atmosphere at Cape May Café is nice. Pastel-colored umbrellas, beach chairs, and croquette clubs decorate the restaurant.

These really set the mood nicely for the meal, although some of the window-facing ones appeared a bit sun-faded. Obviously a very minor observation, but for the prices charged, Beach Club should always be in tip-top shape. 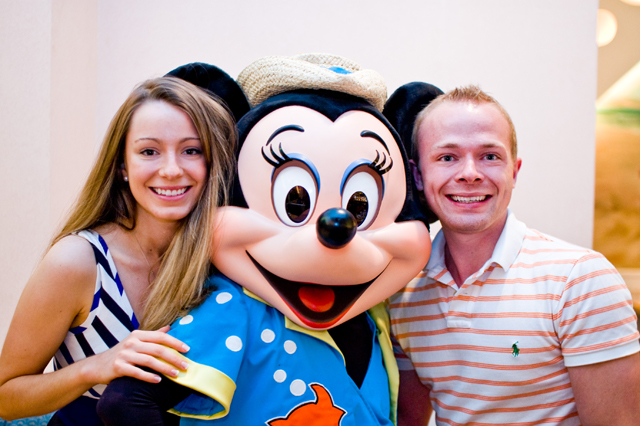 Another nice element of the ambiance (in a way) is that Cape May Café is tucked away and often is far less busy than popular locations like Chef Mickey’s.

Characters spend more time with guests, there are shorter waits to be seated, and the buffets in general aren’t as busy. At least on the occasions when we’ve gone. During the free dining promotion, it’s probably much busier. 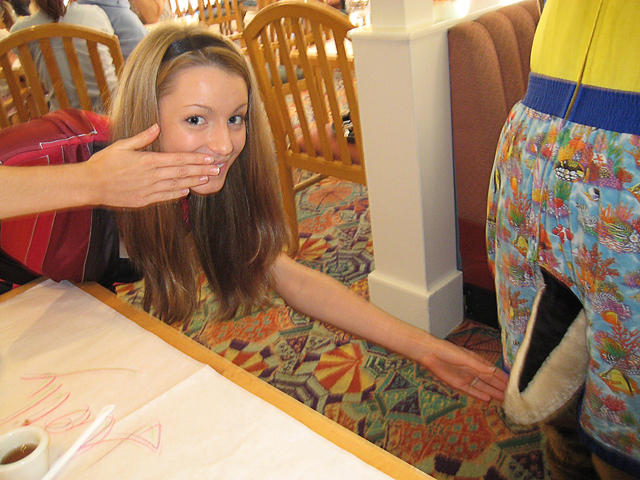 When we first started dining at Cape May Café, the restaurant featured Minnie, Goofy, Chip, and Dale all dressed in very cool swimsuits. Unfortunately, Chip and Dale are no longer regulars–perhaps because it was ecologically-improbable to find chipmunks at the beach? (Then again, whatever kind of half-man, half-dog creature Goofy is is also illogical if you want to break it down!)

As of Summer 2018, Minnie’s Beach Bash Character Breakfast now features Goofy, Minnie, Donald, and Daisy. Donald’s costume is awesome (possibly the best of the bunch), and Daisy is likewise a solid addition, so it’s tough to get too worked up over the loss of Chip & Dale. 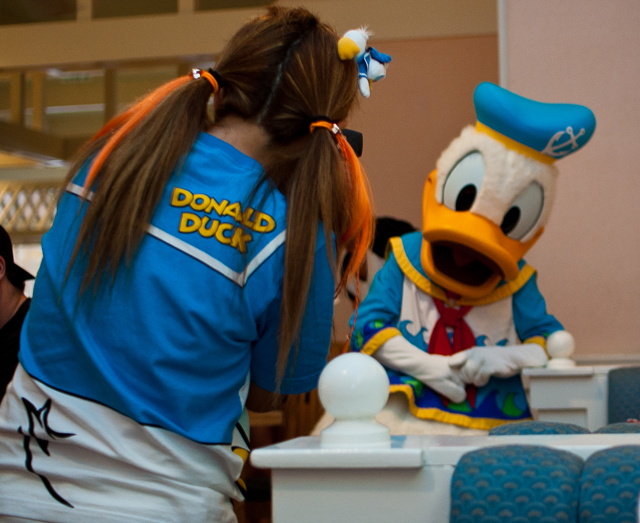 The buffet is divided into a cold bar, hot bar, yogurt bar, and dessert bar. There truly are too many items to name, but some of my favorites include the Biscuits with Home-style Sausage Gravy, Bacon Gruyère Casserole, Mickey Waffles, Breakfast Potatoes, sausage, and bacon.

As you can tell, I don’t mess around at Cape May Café–I order mostly meats and other delicious (and unhealthy) hot-items. Let someone else have all the bananas and oatmeal! 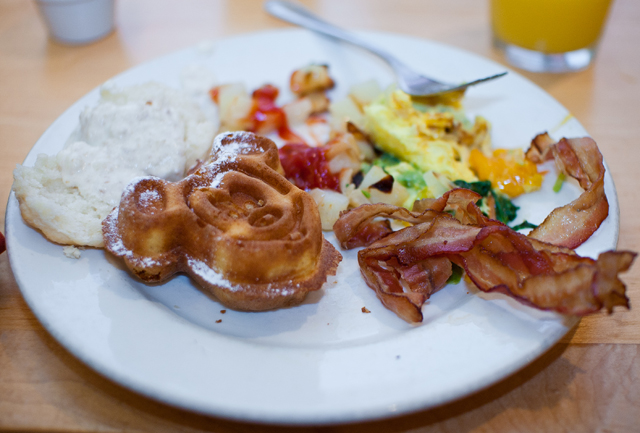 At various times, Cape May Café has also offered a breakfast pizza. I don’t want to fixate on this too long, because it’s not always available, but if it is there, make sure to try it. It’s incredible. A genius combination of cheese and egg and “other stuff” that is absolutely not to be missed. I know the description (and even the concept) may sound suspect, but few things in this world beat a good Cape May Cafe breakfast pizza.

The other breakfast items aren’t too shabby, either. There’s the Disney breakfast standby, the Mickey Waffles, along with some other more unique items like the Bacon Casserole and Breakfast Potatoes. These have always been great when we’ve tried them, never cold or “old” tasting, even when we’ve gone on days that Cape May Café hasn’t been overly-busy. I am not too high on breakfast at Disney regardless of where it is, but the options at Cape May Cafe are definitely solid. 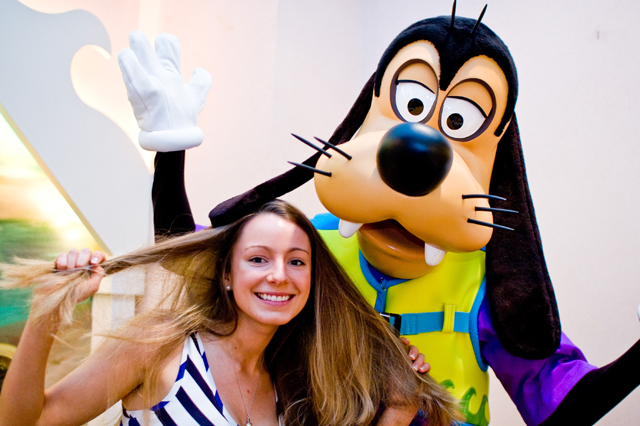 Overall, Cape May Café is a great option for breakfast, regardless of whether you have kids. At nearly $30, it’s rather pricey for breakfast (a dinner clambake is a non-character alternative), but this is par for the course with character meals. It’s difficult to ding it too much for the price since it is in line with other locations, but at the same time, we always do find ourselves with a bit of “sticker shock” when we receive the bill, and I think Disney typically does not do breakfast nearly as well as other meals (for comparison’s sake, we typically pay less when we dine at Beaches & Cream for dinner, even when we order decadent ice cream treats–and we usually leave both restaurants about equally full).

Luckily you can eat as much as you want, so make sure to stick around for a while so you get your money’s worth. That said, the food is excellent, the characters are fun, and it’s always nice to head over to Disney’s Beach Club Resort. It’s one of our favorite character breakfasts thanks to its mix of food, characters, and crowds. If a character breakfast with fab five characters in awesome costumes is what you want, this is the meal for you. Plus, it’s a short walk to Epcot, so you can easily hit the parks after your meal!

What do you think of Cape May Cafe…is it a great, quiet character meal, or is it an inferior experience to the “big” options like Chef Mickey’s and Cinderella’s Royal Table? Any questions about the experience at Minnie’s Beach Bash Character Breakfast? Share your thoughts in the comments!