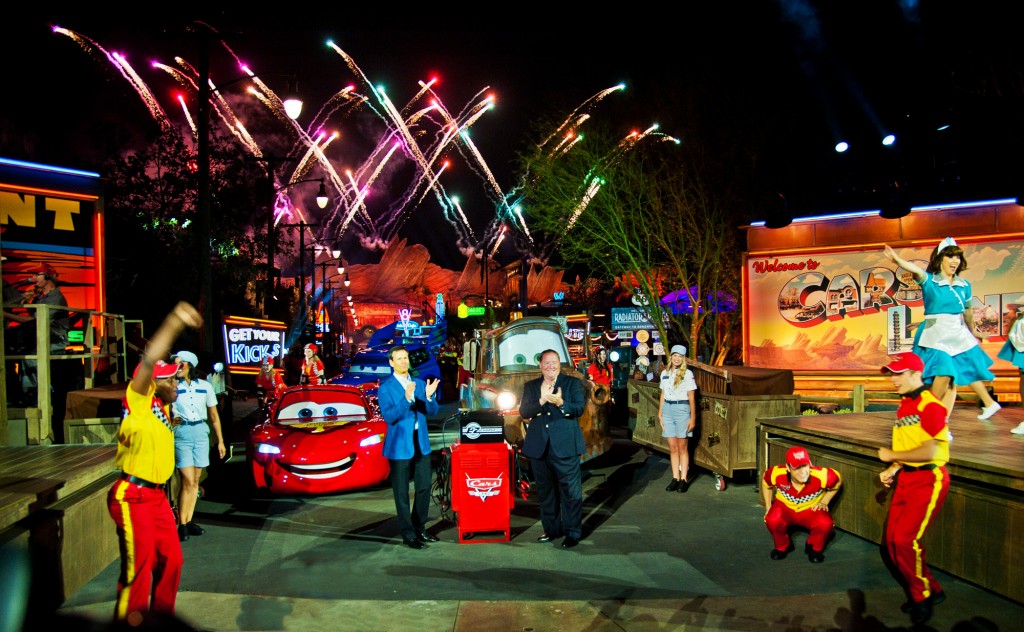 Tom Staggs, Disney Parks & Resorts Chairman, and John Lasseter, Principal Creative Adviser to Walt Disney Imagineering, along with help from Mater and Lightning McQueen use an EZ Charge battery to power on the Cars Land neon at Disney California Adventure during its Grand Opening Ceremony on June 13, 2012 as fireworks explode in Ornament Valley behind them.

Walking down Route 66 for the first time was a pretty entrancing experience for everyone in attendance. I was so in awe that I didn’t snap another photo after these fireworks shots for about an hour (an absolute eternity for me given that I was in a brand new Disney land with amazing visuals). Despite this awe, I was able to pick my jaw up off the floor and head to Radiator Springs Racers (photos) pretty quickly, and was actually in the very first set of cars to board the attraction, two cars behind Bob Iger and Tom Staggs (it would’ve been cool to race them!). I only ended up riding the attraction once more that night because the line exceeded 45 minutes for most the rest of the night, and because I had an entire new land to explore.

And what a land it is. As I said in my Disney California Adventure “2.0” review, Cars Land was money incredibly well spent, and it raises the bar in terms of immersive theming. During construction, I had concerns that Cars Land might be a mistake given its exorbitant cost and all that needed (and still needs) to be fixed at Disney California Adventure. It seemed that Cars Land might be receiving a lot of attention and a large budget because it was a pet project of John Lasseter and perhaps those resources could have been better allocated across the rest of the park. While I still think other areas of Disney California Adventure do need attention, any concerns about the money spent on Cars Land have been completely obliterated. Cars Land was a great investment, and exactly what Disney California Adventure needed. It has a huge “WOW” factor that far exceeds any other land in any United States Disney theme park (although New Orleans Square is still my personal favorite land). Much like Wizarding World of Harry Potter, Cars Land has people talking, and its popularity will transcend Disneyland Resort. People will plan vacations to “visit Disney Land and Cars Land,” not even knowing that the latter is in a Disney-owned theme park with a different name.

Here’s hoping that the success of Cars Land convinces Disney management once again that quality is the best business plan and we continue to see projects of this scope and scale in California and Florida.