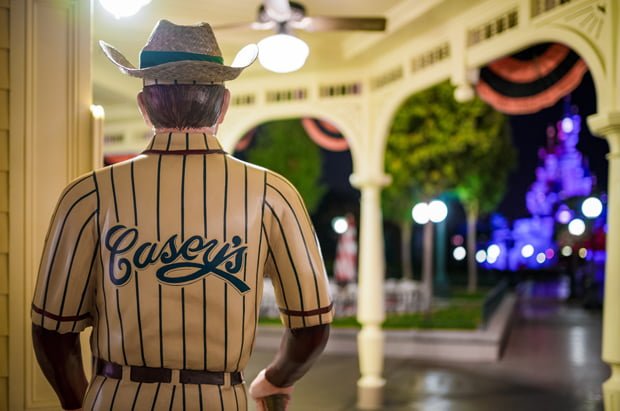 Casey’s Corner is a counter service restaurant in Walt Disney World’s Magic Kingdom specializing in hot dogs, frankfurters, and perro calientes. This review features food photos and my thoughts on the menu, among other things. (Updated July 13, 2022.)

More than anything else, the popularity of Casey’s Corner is probably predicated upon its location. At the end of Main Street, it lures guests inside, where they see long lines. The natural assumption at Walt Disney World is that anything with long lines must be good…and then guests look at the menu.

“Well, already inside and in line, might as well get a hot dog. They must be good if the restaurant is this popular.” More guests stumble inside, seeing the long lines, making the same assumption, and Casey’s Corner’s popularity becomes a self fulfilling prophecy. Statisticians estimate that this is how Casey’s Corner does 83% of its business.

With that said, does Casey’s Corner live up to the “hype” of these lines? Let’s take a look… 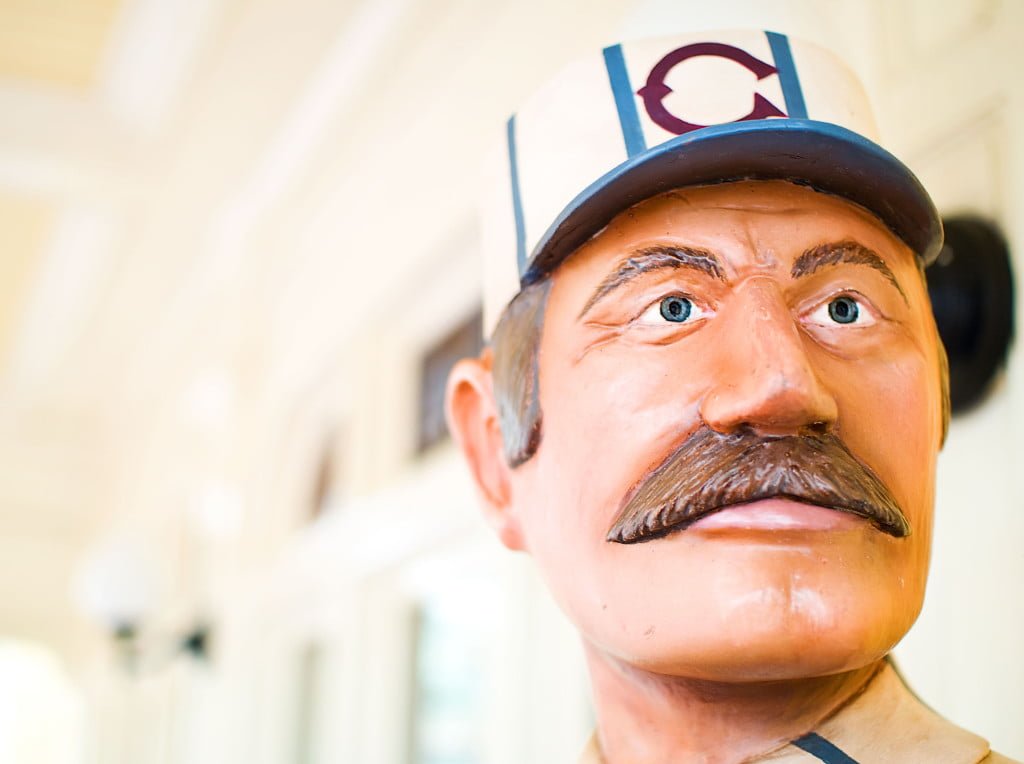 This is the statue of the baseball player outside Casey’s Corner. This sort of perplexes me. The name of the restaurant is “Casey’s Corner,” which references Casey at the Bat, but this statue is most definitely of a pitcher.

Casey is the batter in the story, not the pitcher. Is this statue supposed to be Casey, or the pitcher? IS IT REALLY UNNAMED PITCHER’S CORNER?! 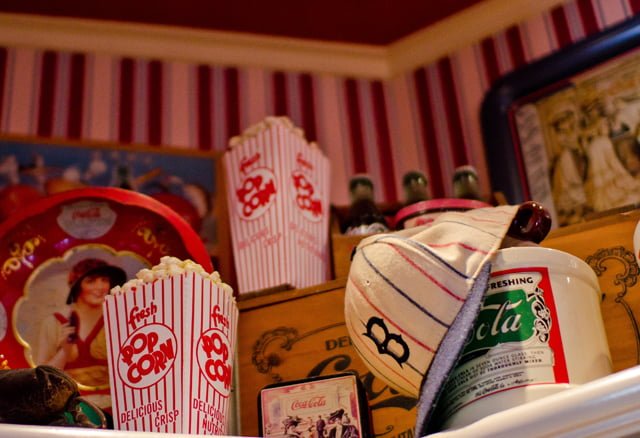 The inside has various nods to the history of baseball and Coca-Cola.

It’s a cute little restaurant and one of the best examples of corporate sponsorship actually enhancing a Walt Disney World experience. 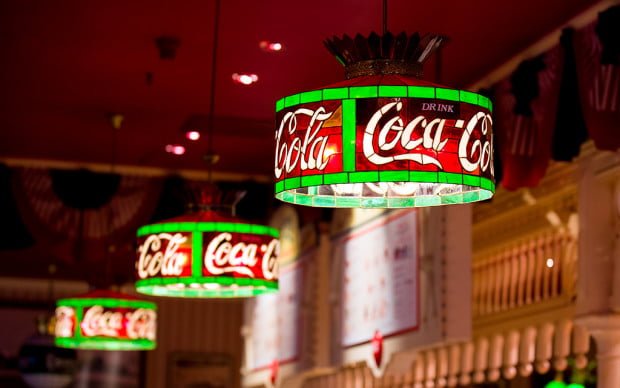 Part of the appeal of Casey’s Corner is that, like Disneyland and Walt Disney World, they encapsulate definitive elements of the American experience: Coca-Cola, baseball, and hot dogs.

Then there’s the live entertainment. Eating a hot dog at Casey’s Corner while watching the pianist perform outside, seeing the parade pass, or watching the Cinderella Castle off in the distance is such an enjoyable and memorable experience. The setting and atmosphere are such a big part of the appeal of Casey’s Corner. 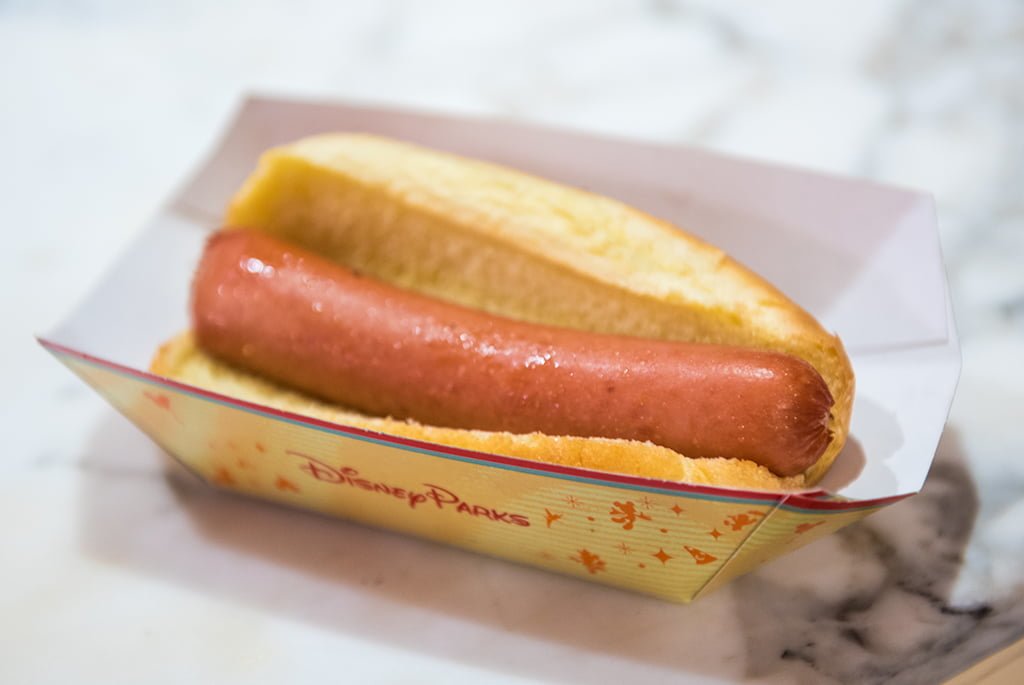 Casey’s Corner has a few different dressed-up variations of the hot dog on the menu, above is the ‘default’ All-Beef Hot Dog.

I love hot dogs. (You can pretty much assume that any food that is awful for your health is a food I love.) 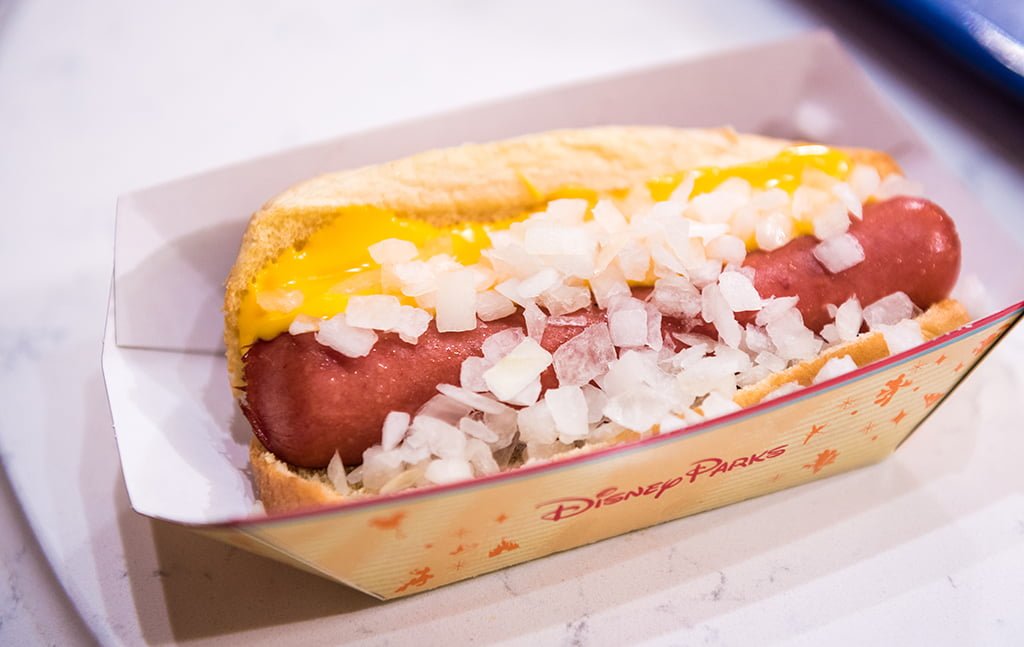 However, there was a time when I did not love Casey’s Corner hot dogs.

At some point several years ago, they switched to a chicken and beef blend of meat that was frankly subpar and lacking in a distinct flavor. Thankfully, Casey’s Corner has gone back to all-beef hots, and improved in a number of different ways. 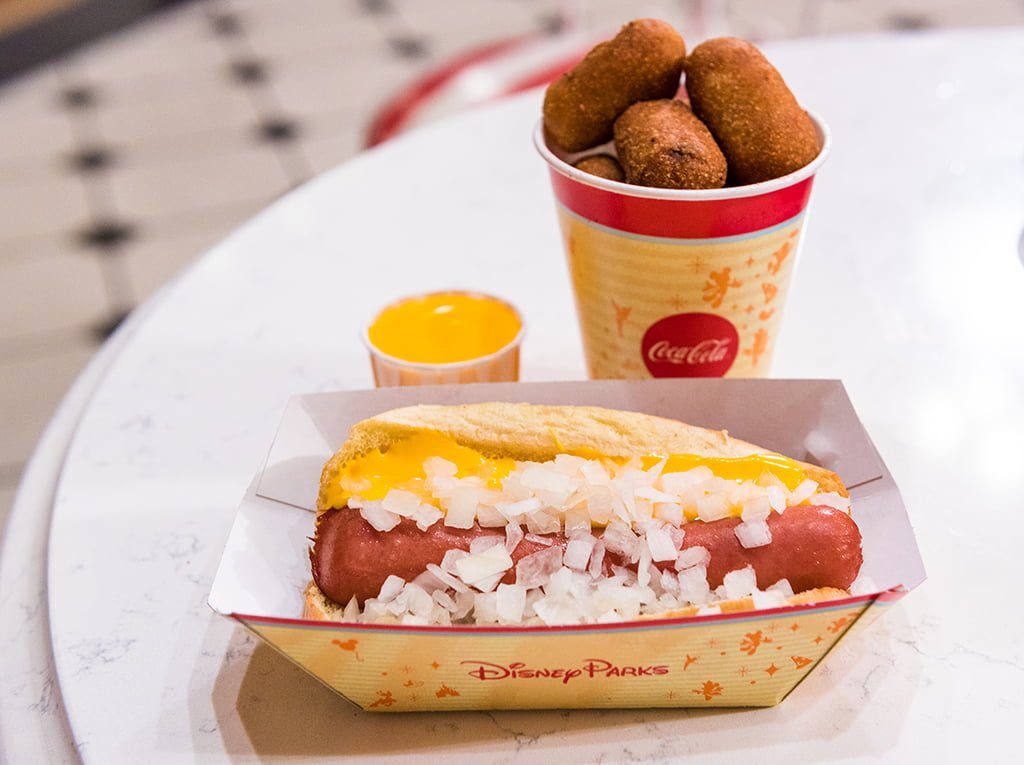 This change alone has made us much bigger fans of Casey’s Corner, and it’s now the restaurant at which we dine more than any other in Magic Kingdom.

In fairness, that’s partly due to Casey’s Corner being open later than anywhere else. I’ve lost count of how many times I’ve grabbed a hot dog here is after a long night of photography (read: I got caught up doing other things and forgot to eat dinner). 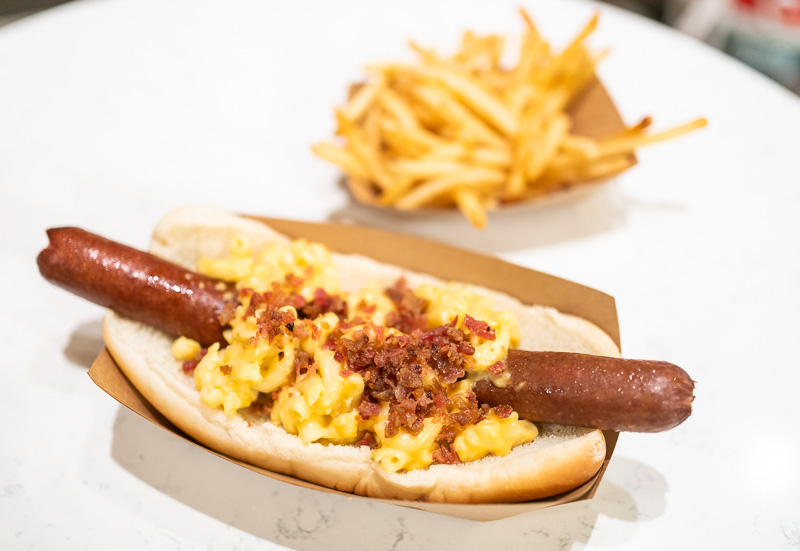 On nights like that when I’m hungrier, I opt for the specialty foot-long hot dog. This changes often, and is Walt’s Chili-Cheese All-Beef Foot-long Hot Dog in honor of Walt Disney World’s 50th Anniversary right now.

With all due respect to Walt Disney, I prefer the Bacon Mac & Cheese All-Beef Foot-long Hot Dog. Had this little gem been invented while Walt Disney was alive, I have complete confidence that he would’ve loved it. If only culinary scientists back then knew how delightful combining mac & cheese, bacon, and hot dog would be! 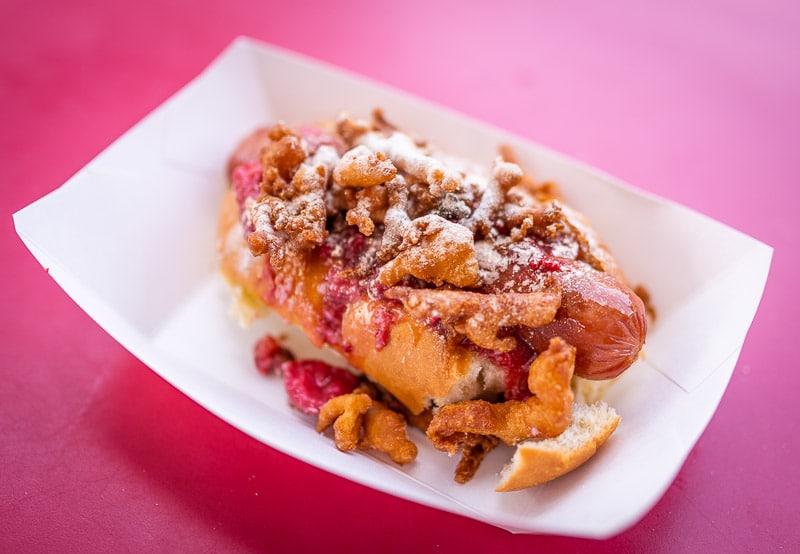 This is a fun idea, but it does not taste good. It’s a novelty for novelty’s sake, with none of the ingredients melding in any way. Neat concept for the celebration, but definitely not recommended! 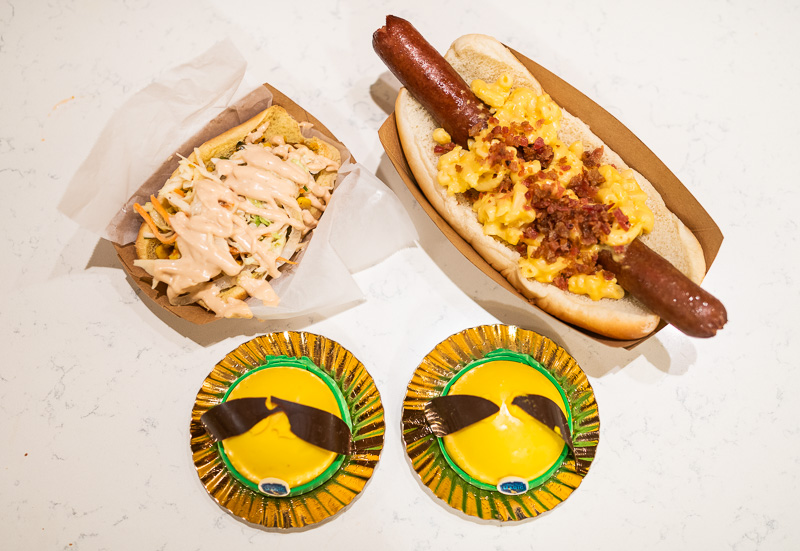 Now let’s turn our attention to the menu highlights at Casey’s Corner.

At least half of you won’t believe me and will close out the browser tab in disgust upon reading this heresy (I can’t fault you for that), but the best dog on the menu at Casey’s Corner is the Plant-based Loaded Slaw Dog (above left). 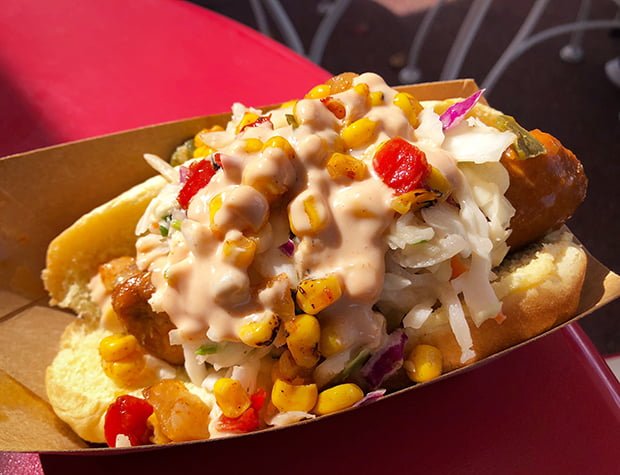 I know, I know! I didn’t believe it at first either when Sarah started singing the praises of this vegetarian hot dog.

This is a Plant-based “Sausage” topped with Pickled Slaw, Barbecue Vegan Aïoli, and Roasted Corn Relish. While it doesn’t taste as good as an all-beef hot dog, the toppings here elevate it to the next level, and come together shockingly well–enough to mask the artificial meat flavor of the “sausage.” I really wish Casey’s Corner served an All-Beef Slaw Dog, as that would be perfection! 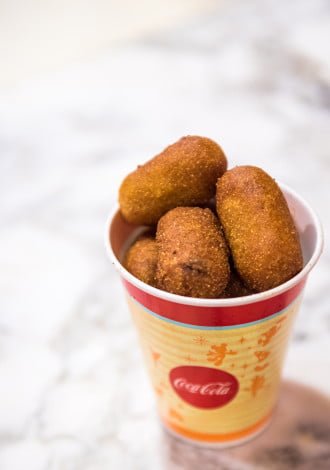 Boom! Corn dog nuggets. These are my Casey’s Corner jam. I find these to be more filling than a regular hot dog, and they don’t come with a side, so they’re even cheaper.

To paraphrase one of the greatest movies all time, “leave the hot dogs, take the nuggets.” 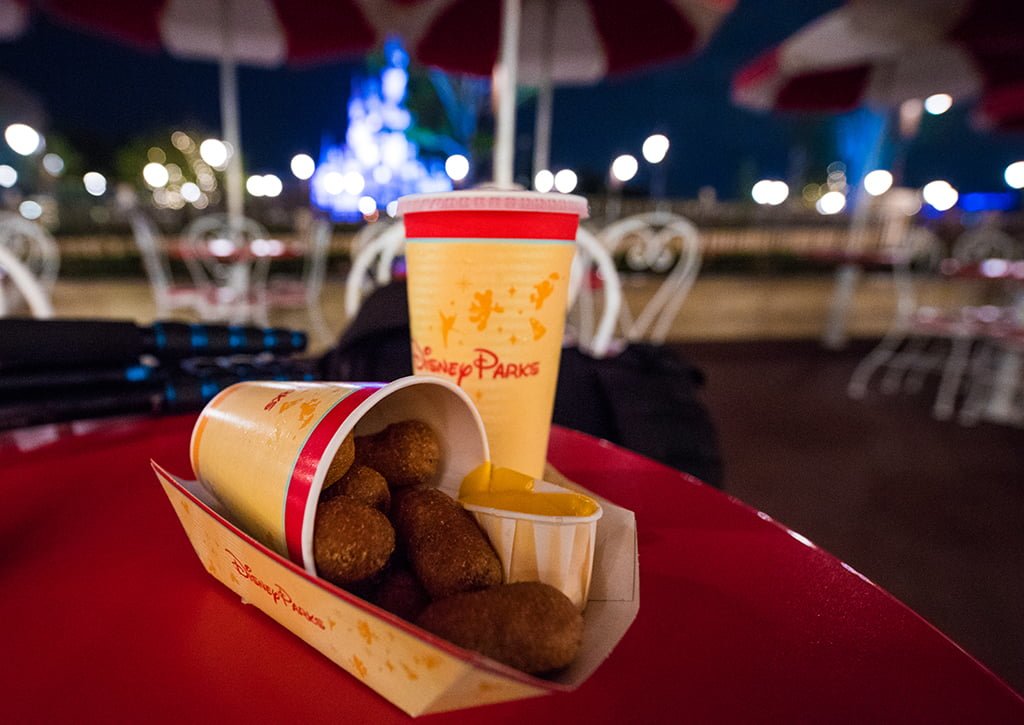 My highly scientific research has concluded that these corn dog nuggets are best enjoyed dipped into hot cheese (with onions in it), while sitting outside after the Magic Kingdom closes, with a view of Cinderella Castle. Not only are these the dinner of champions for tourists after a long day in the park, but I think it’s safe to say that these are the standard diet of most MLB players.

This alone isn’t enough to make Casey’s Corner a restaurant I’d recommend, but what I just described above is certainly one of my favorite (and frequently recurring) “moments” in Walt Disney World dining. 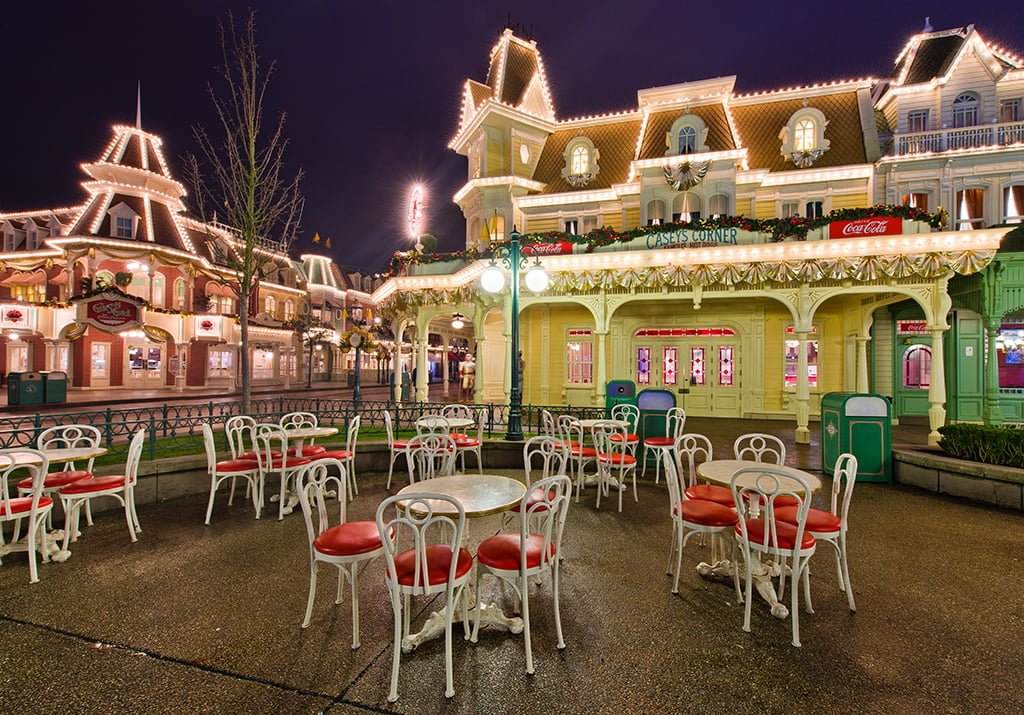 Since there’s not a lot of substance to this review, and since I’m not particularly inclined to do separate reviews for hot dog joints around the world (spoiler alert: every park’s version of Casey’s serves similar hot dogs), I figured I’d share some fun facts about the other Casey’s Corners around the world. Woo hoo!!!

Up first is the Casey’s Corner at Disneyland Paris, pictured above. Those of you who view Parisians as snobby foodies might feel a sense of superiority upon learning that this is probably the most popular restaurant in the park. Doesn’t hurt that so many of the others are closed. 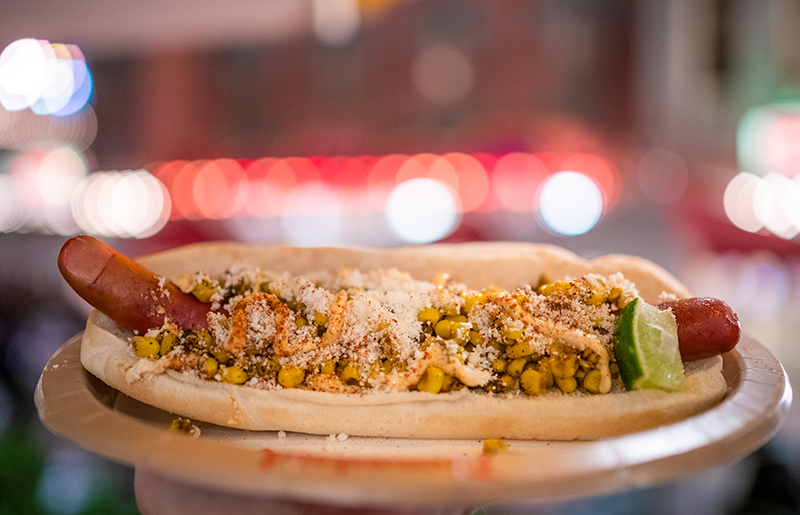 The ‘original flavor’ hot dog joint at Disneyland is known as Refreshment Corner a/k/a Corner Cafe a/k/a Coke Corner. It’s sorta like Puff Daddy in terms of names. While you can get the original flavor of Coca-Cola here, you can also get a delicious flavor shot in your Coke. Think of this as the pre-cursor to Coke Freestyle. 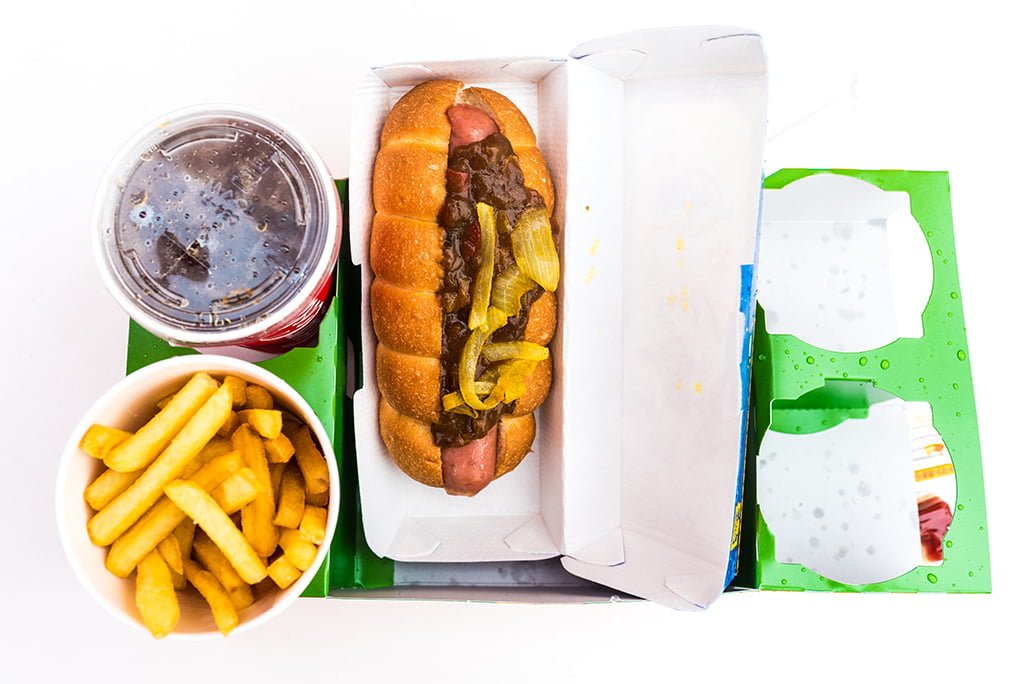 Tokyo Disneyland takes a page out of the Disneyland playbook and has a hot dog joint named Refreshment Corner in the same location at the end of World Bazaar.

The dog above may look like its higher quality, but I can assure you, it is not. I only purchased it because it was a special item for Natsu Matsuri, and came in a pretty cool box (as you can see in my Natsu Matsuri at Tokyo Disneyland post). 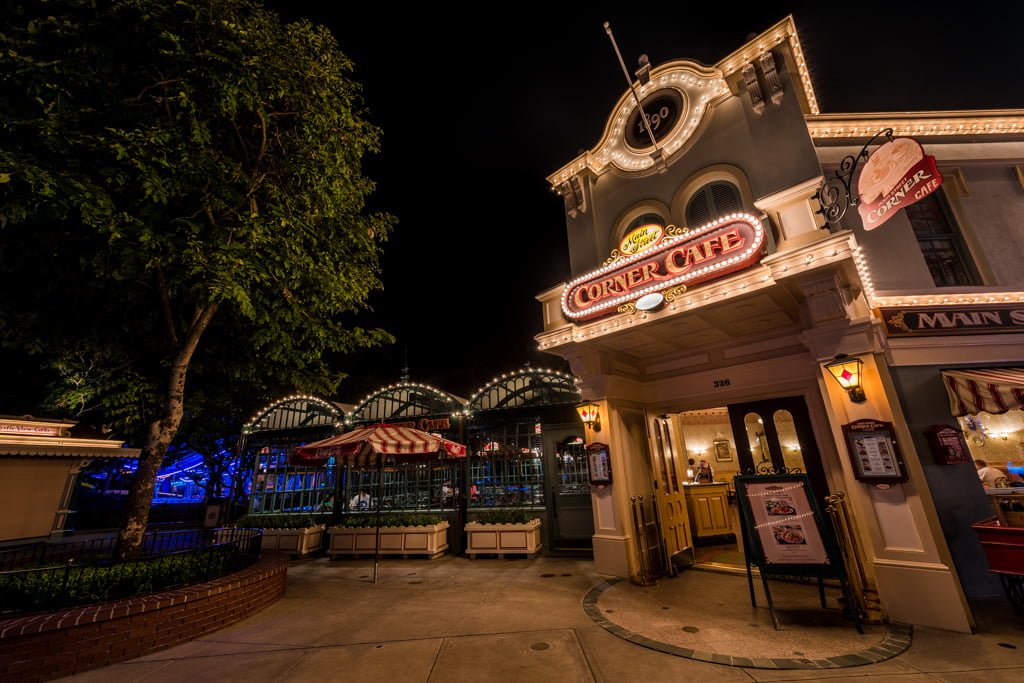 Hong Kong Disneyland does not have its own version of Casey’s Corner.

It does have a Corner Cafe, but that’s on the other side of the street and isn’t the same. No wonder so many critics complained that it was an “incomplete” park when it opened. For shame, Hong Kong, for shame. 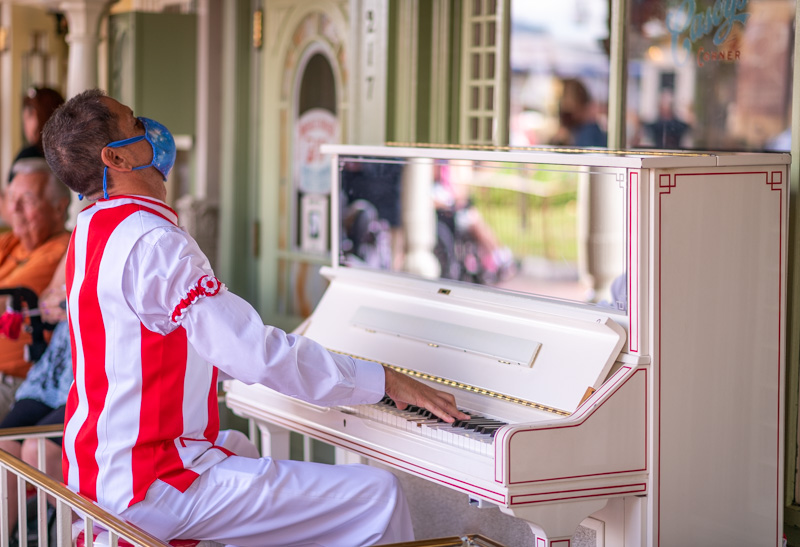 Overall, Casey’s Corner is a special place. It’s almost as much of a staple in the Disneyland-style parks as the castles themselves…but instead of being a stunning, grandiose castle, it’s a restaurant that sells hot dogs. While some of these frankfurters are tasty and memorable (especially among Magic Kingdom’s weak counter service lineup), that’s not why Casey’s Corner is so iconic.

Rather, it’s the setting and atmosphere. There is truly something to be said for the sublime experience about grabbing a late lunch, watching the pianist play, parade pass, or Cinderella Castle stage show off in the distance. Seeing the ducks quack loudly, demanding hot dogs (don’t feed them). 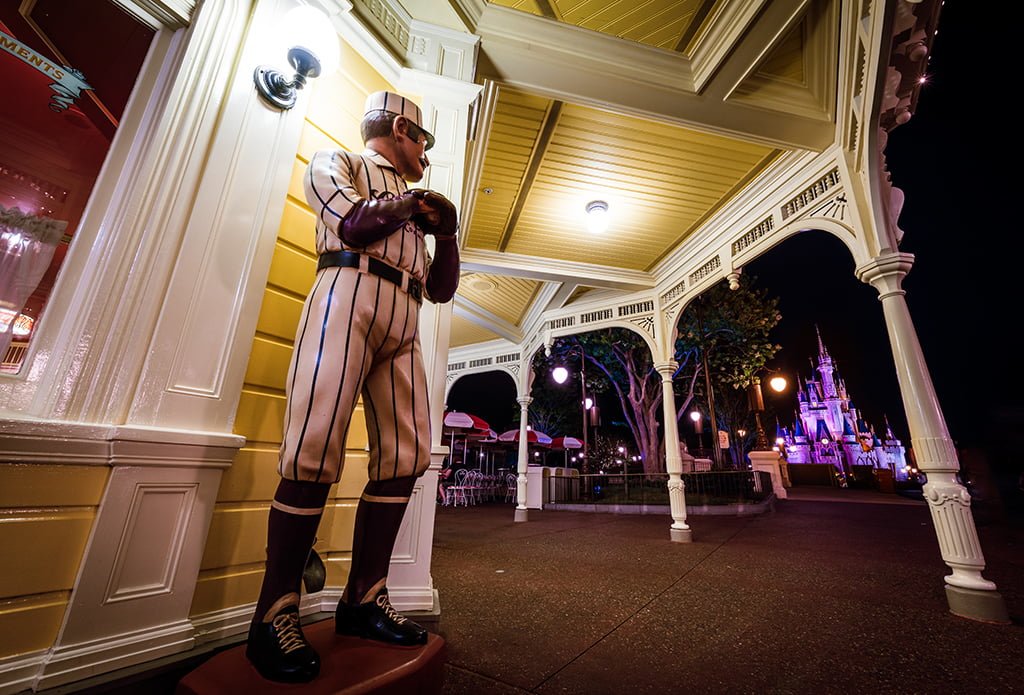 Or, closing out the park, grabbing a thing of corn dog nuggets from Casey’s and collapsing at a table outside, gazing at Cinderella Castle as guests leave Magic Kingdom at the end of the long day.

All of those experiences are like another layer of toppings on the hot dogs at Casey’s Corner that make the dogs taste even more satisfying. Then when you reminisce on the meal, it’s even tastier than you remember because of the overarching atmosphere. That’s the true “secret sauce” of Casey’s Corner, and it’s something few other restaurants can replicate. The secret sauce that Casey’s Corner serves up is far better than that of the Big Mac or any other fast food restaurant–it’s nostalgia and sentimentality.

If you have dined at any ‘version’ of Casey’s Corner, what was your experience? Is there a comparable Walt Disney World restaurant that you prefer? Any other menu recommendations? Do you agree or disagree with my assessment? Any other tips? Share your thoughts in the comments!