It’s time for more of my Disney photos in this installment of “Scenes from Disney Parks”! This time, we’re heading to Walt Disney World, with a set of new photos of the parks looking “normal.” I almost opted to dig into the archives and edit some new Christmas photos, but I know not everyone is
Read More
For me, the highlight of Disneyland at Halloween is Frontierland. Between the Dia de los Muertos decor near Rancho del Zocalo and The Halloween Tree near Golden Horseshoe, there’s a lot of actual meaning behind the decorations in Frontierland. It’s not simply decorating for the sake of decorating. Disneyland fans are probably fairly familiar with
Read More
I’m back with the second installment of “Scenes from Disney Parks,” with a set of new photos that I recently shot during the start of Halloween Time at Disneyland. Every photo in this set is from Disneyland and features Halloween as a motif (be it prominent or in the background, etc.). Disneyland is always a
Read More
Welcome to a new, possibly recurring photo-sharing post here on DisneyTouristBlog! Back when I started this blog, photos were a key component, with “photo of the day” posts being the most common posts here. Over time, I noticed that those photo of the day posts weren’t popular compared to the meatier, text-driven posts. This was
Read More
One thing that struck me about Aulani, A Disney Resort & Spa on our recent visit was the sheer beauty and detail of the resort. Part of this was to be expected–Disney’s Animal Kingdom Lodge at Walt Disney World is striking–but Aulani takes this to the next level. Overall, Aulani exceeded our expectations with its
Read More 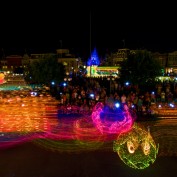 SpectroMagic! is an evening light parade that was presented nightly at Walt Disney World’s Magic Kingdom. It debuted in 1991 as part of the 20th anniversary celebrations, replacing the Main Street Electrical Parade. In this SpectroMagic tribute, we’ll share some of my favorite photos of the parade, which is our sentimental favorite of Disney nighttime
Read More
Walt Disney’s Enchanted Tiki Room celebrates its 50th Anniversary at Disneyland today. In honor of this groundbreaking attraction (the first to utilize Audio-Animatronics), I though I’d share some of my favorite Tiki Room photos. This article includes photos from the Disneyland, Walt Disney World, and Tokyo Disneyland versions of the attraction. Although we’ve seen multiple
Read More
Welcome…to Tokyo Disney Resort. (Read that like John Hammond in Jurassic Park.) We have made the pilgrimage to Japan to visit what many Disney fans regard as the pinnacle of the Disney theme park experience. Barring issues with our flights or our poor senses of direction, we are now at Tokyo Disney Resort to celebrate
Read More
Mickey’s Once Upon A Christmastime Parade is run during Mickey’s Very Merry Christmas Party at Walt Disney World Resort’s Magic Kingdom on select nights during the holiday season. Christmas is one of the best times of year to visit Walt Disney World, and this parade is a big reason why! Mickey’s Once Upon a Christmastime
Read More
If the Christmas season were a fireworks show, we’d be nearing the grand finale. The presents are wrapped, the food is prepared, and one of our smaller family gatherings just concluded, leaving the house empty and quiet for the rest of the night. Of course, tomorrow morning the “grand finale” will occur, in the form
Read More
Not only is Disneyland Paris’ Main Street the most beautiful and detailed Main Street I’ve ever seen, but it’s also the most beautiful Main Street at Christmas. This is in large part to the Christmas tree (which I’m told dates back to 1992 and is due to be replaced next year, but has aged quite
Read More