The Boo To You Parade is right up there with Mickey’s Once Upon a Christmastime Parade as the best parades shown at Walt Disney World Resort. This parade is shown only during Mickey’s Not So Scary Halloween Party, and features several “units.” The first unit is called Mickey’s Trick-or-Treat Bash, which has a lot of
Read More

The Headless Horseman rides at the beginning of the Boo to You Parade during Mickey’s Not So Scary Halloween Party. Since the parade starts in Frontierland and Main Street USA (the best place to view the parade) is at the end of the route, and because the horseman moves considerably faster than the rest of
Read More
Prior to visiting Disneyland last November, we had never experienced Haunted Mansion Holiday. After hearing a lot about it online, we were both excited to see it because it was something different, even though neither of us are Tim Burton fans. This, combined with experiencing holiday “overlays” in the vein of Mickey’s Jingle Jungle Parade
Read More
One of my biggest personal reasons for attending Mickey’s Not So Scary Halloween Party and Mickey’s Very Merry Christmas Party each year is the unique lighting utilized in the Magic Kingdom during these parties, and how that lighting makes for interesting and different photos. For this same reason, I’ve shared that I’m also personally looking
Read More
Before our October 2012 Walt Disney World trip, I came to a realization: I had not photographed Magic Kingdom fireworks in a “normal” manner since October 2009, when I used a Nikon D90. Since then, I had been using either a fisheye lens (for perimeter bursts) or a neutral density filter (for more chaotic photos).
Read More 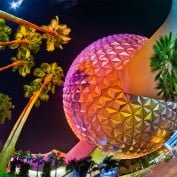 It’s becoming more and more difficult to think of unique names for Spaceship Earth photos, given that I have so many of them. The only thing stopping me from switching to a bland numbering scheme (“Spaceship Earth 112,” “Spaceship Earth 113,” etc.) is that I’d never remember what number I was on. Whether one person
Read More 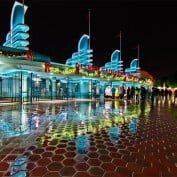 Disney California Adventure 2.0 has been the big Disney news story of 2012, and for good reason. Recently, rumors have been confirmed that Cars Land and Buena Vista Street will be receiving lavish Christmas overlays. Temporary light poles are being installed on the right side of the street in Cars Land for, presumably, a Main
Read More 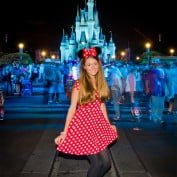 Sarah’s costume for Mickey’s Not So Scary Halloween Party at Walt Disney World on September 28, 2012. Demonstrating that you can be a female who wears a nice-looking Halloween costume without going for the provocative look. Sarah’s costume is a non-literal take on Minnie Mouse, with an outfit that resembles Minnie, but doesn’t mimic Minnie’s
Read More 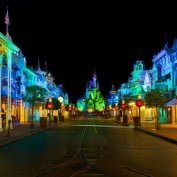 Last week, I mentioned the difficulty of photographing Main Street, USA during Mickey’s Not So Scary Halloween Party due to the harsh and uneven lighting. Here is that lighting at play at the end of the night, and although this shot wasn’t quite as tough to capture as it would have been if the entire
Read More 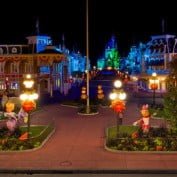 Main Street, U.S.A. Early fall. A tree-lined little world of front porches, hot dogs, the laughter of children, and the smell of a candy vendor. At the sound of the roar and the flash of light, it will be precisely 12:53 a.m. on Main Street. This is Main Street on a late Friday night. Main
Read More 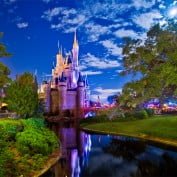 On my first night in Walt Disney World with the new Nikon D600, I was itching to put the camera through its paces. Unfortunately, we had to eat dinner before heading out causing us to miss the sunset, and then I had a delay getting into the Magic Kingdom because my ticket wouldn’t read (of
Read More