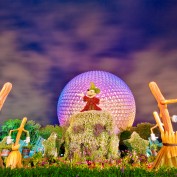 While Food & Wine Festival is my favorite event at Epcot thanks to the excellent food to sample, Epcot looks its best during (and right before) Flower & Garden Festival. All of the regular flower beds receive special attention and new flowers, topiaries are placed throughout the park, and various special touches are added. With
Read More 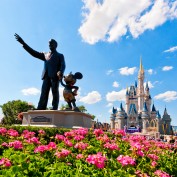 Cinderella Castle and Partners are incredibly photogenic anytime, but when you add a beautiful bed of flowers and some nice, puffy clouds, you have a scene that begs to be photographed. On our last few visits to Walt Disney World prior to this trip the flower bed had been sort of drab and plain. I
Read More 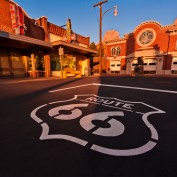 Cars Land is beautiful at night when all of the brilliant neon lights are on, but after seeing one mediocre sunset in Cars Land, I’m convinced that it is most beautiful during a nice sunset with dreamy and vibrant orange, pink, and purple hues in the sky and the neon lit. We didn’t have any
Read More 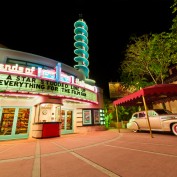 I love the bits of classic Hollywood present throughout Sunset and Hollywood Boulevards at Disney’s Hollywood Studios. From the neon to the references to the incredible detail, these two streets are the highlight of the Studios. Given their quality, these areas should help set the tone for the rest of the park. That doesn’t always
Read More 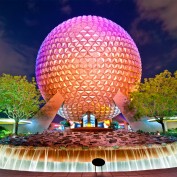 With each Spaceship Earth photo I post, it becomes more and more difficult to come up with something to say about the shot. I’ve said all of this before, but it bears repeating… Spaceship Earth is my favorite photo-subject at Walt Disney World. It’s an amazing and unique icon. It is the embodiment of what
Read More 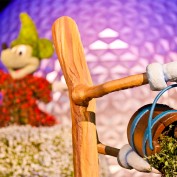 It’s no surprise that Walt Disney World Custodial Cast Members are so good at making water art with their brooms and mops. As it turns out, some of these Cast Members actually are mops! Disney magic or an attempt to cut costs with cheap labor? YOU BE THE JUDGE! 😉 Joking aside, this is a
Read More 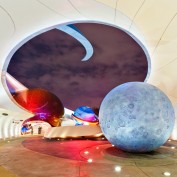 Mission: Space is not Horizons. For this reason alone, I don’t think it will ever get a fair shake among serious Disney fans. To be sure, I’m not saying that Mission: Space is superior to Horizons. While I have incredibly vivid memories of Journey into Imagination, World of Motion, Body Wars, and other EPCOT Center
Read More
We hope you all are having or had a great Independence Day. Here’s our photo salute to all nations–but really only America!
Read More 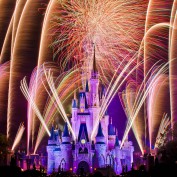 As we approach the Fourth of July, it seems fitting to focus on “America” in the Disney theme parks. Walt Disney World and Disneyland are rife with Americana and Patriotic displays. The reason for this stems all the way back to Walt Disney himself, who loved America. He himself was probably as American as anyone
Read More 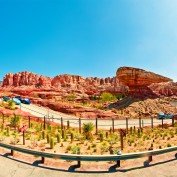 It’s impossible to get an idea of the scope and scale of Ornament Valley and the Cadillac Mountain Range in Cars Land at Disney California Adventure through photos. This is part–not all–of the mountain range that is visible from behind Flo’s V8 Cafe. I captured this shot from a riser behind Flo’s V8 Cafe that
Read More 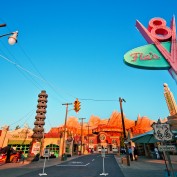 During the June 14, 2012 preview of Disney California Adventure, Cars Land closed at 7 pm. Disney “encouraged” attendees to head to Buena Vista Street for its Grand Opening prior to this, and by about 6:30 pm, not many people were left in Cars Land. So few, in fact, that we rode Radiator Springs Racers
Read More