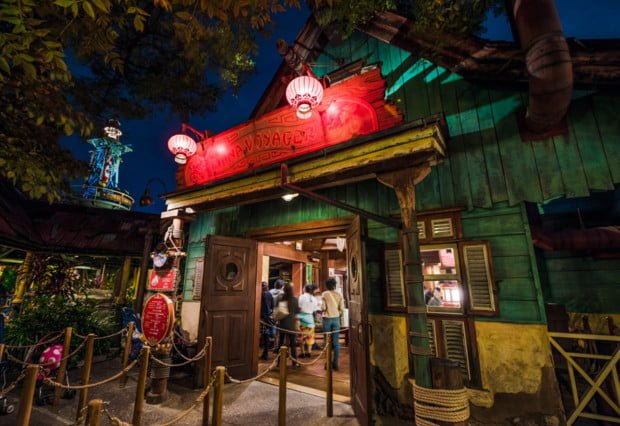 China Voyager is a counter service restaurant in Adventureland at Tokyo Disneyland serving noodles and ramen. This Disney dining review features food photos, (over) analysis of the menu, thoughts on ambiance, and whether you should dine at China Voyager.

In short, our answer to the last question is an emphatic YES. China Voyager is one of the best counter service restaurant at Tokyo Disney Resort. In fact, in our Top 10 Tokyo Disneyland Counter Service Restaurants list, we ranked it #1. This buffeteria/assembly-line style restaurant serves up some of the best, most ambitious food in the park, and cuisine that’s at least somewhat Japanese: noodles.

That might give you pause as the name of this restaurant is China Voyager, but most of what you’ll find here is (more or less) ramen. Japanese ramen is inspired by Chinese wheat noodles, and although “Chinese noodles” is a more expansive term that can include other types of noodles, it more or less works to describe what’s served here. I did some research trying to reconcile this, and couldn’t really figure out an explanation beyond this. (If I’m missing something, please let me know in the comments.)

Plus, the name allows for a little wiggle room in the menu. A couple of years ago, we had Chow Mein and Char Sui here (neither of which are on the menu anymore), both of which are definitely not ramen.

There’s also the possibility that the restaurant name is not meant to reference the menu and is just a name someone liked. For all I know, China Voyager could’ve originally served cupcakes and BBQ ribs when it first opened in the early 90s, but the restaurant still had this name as reference to the artifacts on display inside that were collected by a Chinese (pirate?) voyager. 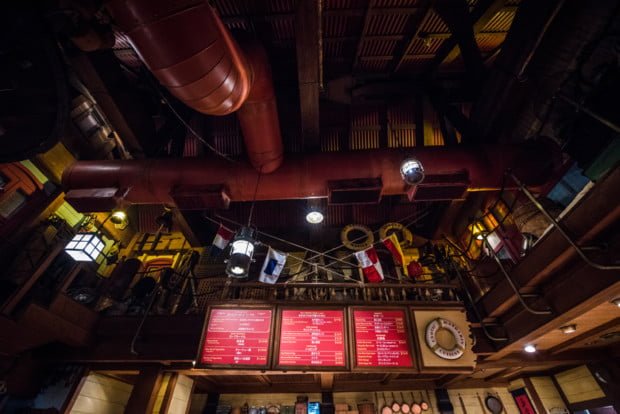 In any event, the noodles/ramen here are good. We have had some excellent noodles in Japan–from the ramen museums we’ve visited (one in Osaka and one in Yokohama) to side streets stalls in Kyoto, Tokyo, to even the basement of Ikspiari—and I’d put China Voyager in the top 10. 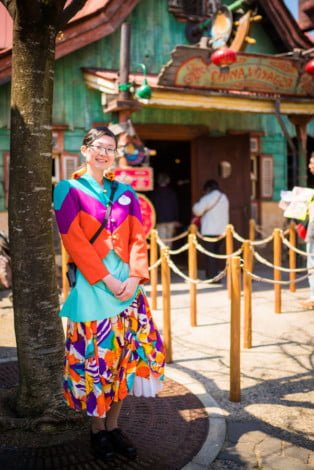 We aren’t the only ones who love the noodles at China Voyager. Especially during the prime dinner hours, there is routinely a long line at China Voyager, rivaling that of Queen of Hearts Banquet Hall.

Due to this, we’d recommend a late lunch at China Voyager to avoid crowds. Or, wait until after the dinner rush and grab seats outside on the quiet back patio (below). 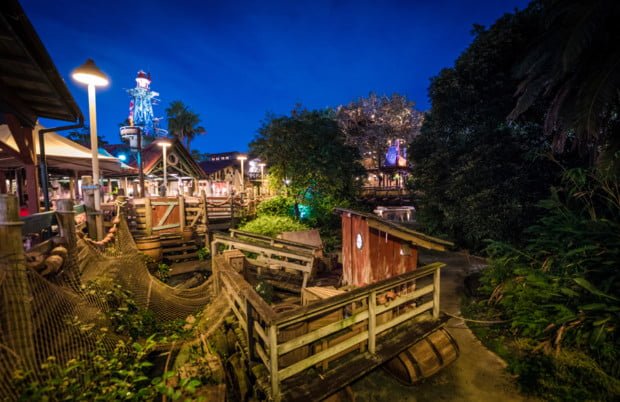 We might also have an answer to the ramen v. noodles question in the restaurant’s backstory! Per Tokyo Disney Resort’s website, China Voyager specializes in “secret pirate recipes” inherited by the grandson of the ship’s cook.

He then started a restaurant in a repurposed boat house, and it became popular with pirates. Or, the backstory could be entirely different if Google Translate let me down. (This one seems to make sense.) 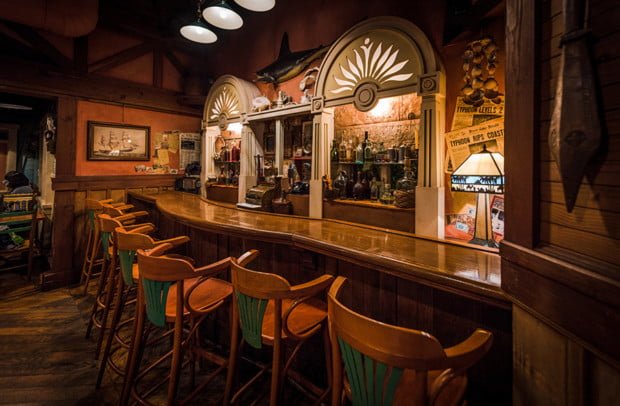 Coral Landing was added at shortly after Typhoon Lagoon opened at Walt Disney World, and some Imagineers worked on both projects. 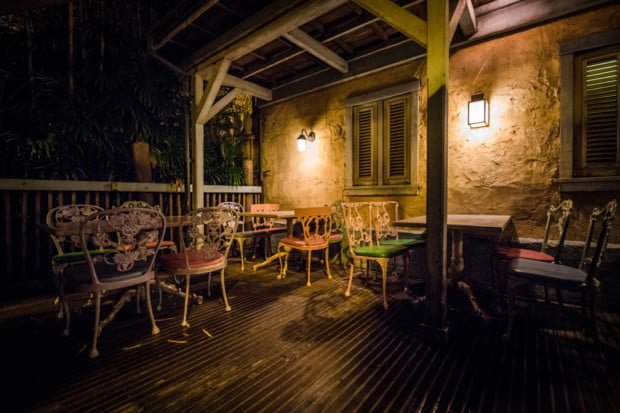 You can see clear parallels between the two projects. Both Typhoon Lagoon and China Voyager are eclectically detailed, featuring a lot of references to tropical storms and spots being altered and repurposed.

The result with China Voyager is a restaurant that is sprawling, with a variety of different rooms, plus outdoor seating. This is about the point in time when Tokyo Disneyland sought to add more detailed, layered environments to the park, first with this and then with Critter Country. 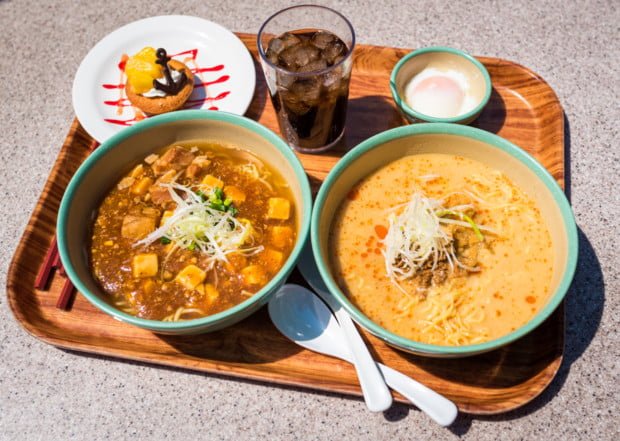 Above is what we had last time. 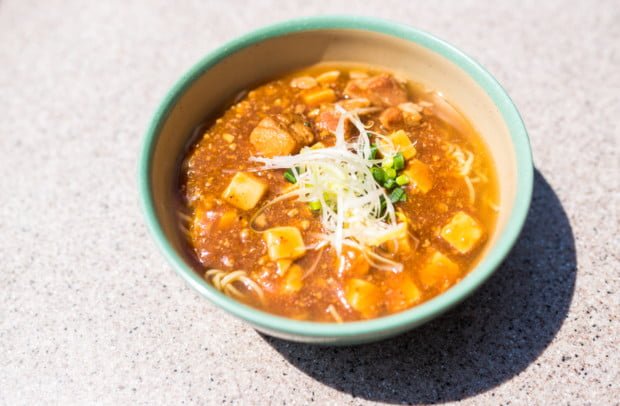 This is the Voyager Set, the exact contents of which rotate seasonally. In this case, it was pork and tofu. 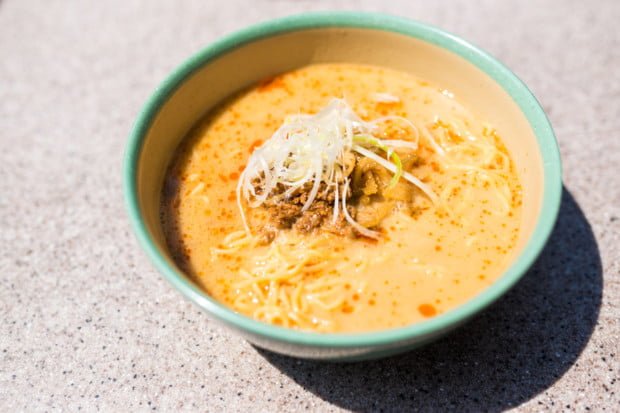 This is the spicy miso with pork noodle dish. This is not really all that spicy, but I generally prefer the ‘spicy’ version of miso as I think it has a more complex flavor.

It seems like the menu changed here a few years ago to skew much more towards ramen. In our opinion, the new menu is a dramatic improvement. 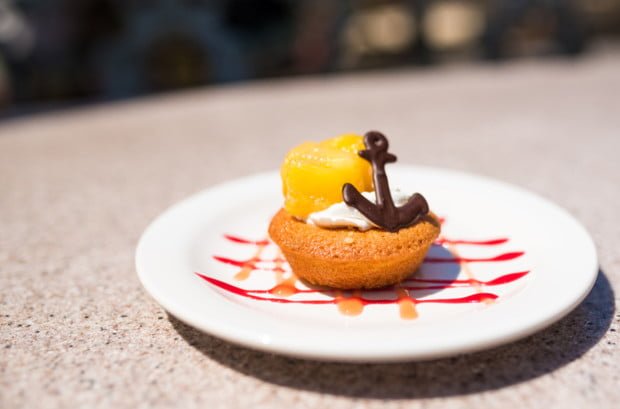 This was also a seasonal dessert, a pineapple cake that was delicious. 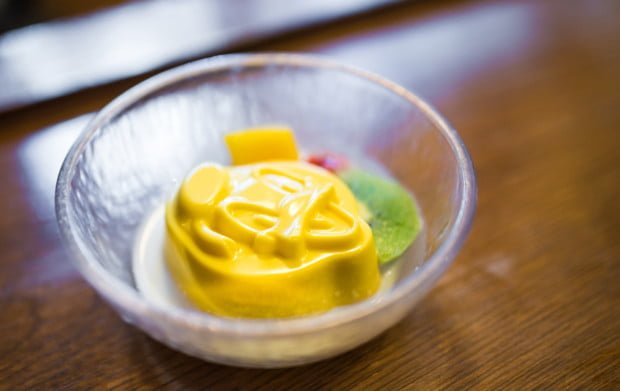 One of the staples of the dessert menu is this mango pudding. Fairly tasty, but nothing all that ambitious or special. In addition to these desserts, you can also order a side of steamed meat buns (befitting of a Chinese restaurant).

For the longest time, I didn’t have much interest in ramen. It reminded me of being my days of being a broke college student, and I assumed it was a cheap and simple dish. In the last couple of years, I’ve come to realize it can be so much more, but I’m still far from an expert when it comes to dissecting what makes a “good” ramen dish. Ultimately, I think the best noodle dishes are about balance: flavorful broth that isn’t too fatty or sodium-y, good texture, and semi-firm, semi-chewy noodles. If you’ve ever had great ramen, you know it’s not nearly as ‘simple’ as the packets. While China Voyager falls short of some of the best ramen stalls in Tokyo, it delivers a near-perfect balance that is very good. It’s also a great gateway into the exciting world of Japanese ramen. Between the very good, very large noodle dishes and the great themed indoor and outdoor environments, China Voyager is a must-do restaurant in Tokyo Disneyland.

One Response to “China Voyager Review”