The Christmas season is the most popular time for Disney Vacation Club members to visit Walt Disney World. With all of the hotels and parks decked out for the holidays, this should come as no surprise.

It’s certainly our favorite time to visit, which is probably clear to anyone who has read our “Ultimate” Christmas Guide to Walt Disney World. There’s just so much to do and so many beautiful lights and decorations to see. (Not to get sidetracked from the point of this article; I just love Christmas at Walt Disney World!)

Here we’ll take a look at the best Disney Vacation Club resorts during the Christmas season. We’ll also include some detail as to why each of the resorts is appealing, so you can look beyond our numbers and determine which resort hotels might be best for your Christmas trip to Walt Disney World.

There really is no ‘one-size fits all’ recommendation, and it’s important to remember that even if you find the perfect Disney Vacation Club resort for your Christmas vacation, the demand at Christmas may make it difficult to book numbers one through four at the 7 month window. (If you’re primarily doing Christmas trips and one of these hotels really appeals to you, you might want to keep that in mind when choosing a home resort if you haven’t already bought into Disney Vacation Club.)

Let’s take a look at the Top 5 Disney Vacation Club Resorts at Christmas! 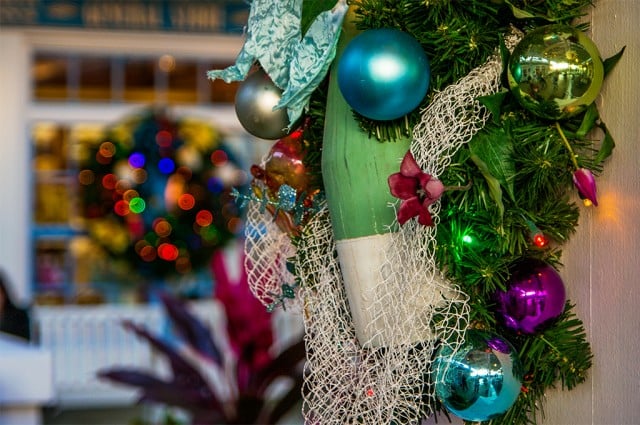 Instead, it’s more for practical purposes. Along with Epcot’s International Food & Wine Festival, the Christmas season is one of the busiest times of year for Disney Vacation Club bookings. If your home resort isn’t listed in numbers 1-4, there’s a good chance you’re going to be choosing between Old Key West and Saratoga Springs when the 7 month window opens. For the majority of you who find yourself faced with that dilemma, I thought it would be helpful to share why I think Old Key West is the choice to make.

Saratoga Springs at Christmas, to me, feels sort of like an afterthought. I already lamented the general theming of the resort in our Saratoga Springs Review, and the Christmas decorations there seem like more of the same. It’s a lot of poinsettias, but not much else. Old Key West’s theming isn’t exactly suited to Christmas decorations, but they make lemonade out of lemons and roll with a very pretty overlay. Think Christmas Island by Jimmy Buffett. It’s basically the exact opposite of Wilderness Lodge at Christmas, but it’s still well done, and it still works. In fact, if you’re vacationing to Florida to get away from those intense Northern winters, this theme that combines the tropical spirit with Christmas may be perfect. On top of that, Old Key West is a great choice for those holiday family gatherings, as the rooms are generally larger and can accommodate more members of your family when ‘hanging out.’ (Which, I suppose, may or may not be a good thing.)

Given that, it might seem odd that the Villas at Wilderness Lodge occupies the #1 slot and the Animal Kingdom Villas are #4 instead of #2. It’s all about ambiance. At Christmas, Wilderness Lodge’s decorations feel like an organic part of the Lodge’s experience. Almost as if they always belong there. While beautiful, I can’t say I feel the same way about Animal Kingdom Lodge’s decorations. The mood of the resort remains the same, just with Christmas decorations added to the mix. Perhaps this is all in my head, as both hotels follow the same formula, but I think the end result at Wilderness Lodge is better.

The decorations at Disney’s BoardWalk Inn (and Villas) seem to be ever-evolving, with differences from year to year. The consistent thing is the centerpiece, which is a life-size edible display. It has been a carousel and a stationary “fireplace” in recent years. The whole lobby is thoroughly decorated, with gorgeous vintage-inspired decorations throughout it, and a large tree in the outdoor courtyard. Even though they are lacking the several-story tall trees found at the Magic Kingdom-area resorts, the atmosphere at all of the Epcot-area resorts is great at Christmas, with beautiful decorations and cool displays.

As is the case with the next entry on this list, the BoardWalk Villas also score points for their location. Walking or boat distance to Epcot and Disney’s Hollywood Studios, the BoardWalk Villas are conveniently located for your visits to these parks. Thanks to the Osborne Lights and the Illuminations: Peace on Earth tag, we find ourselves at these parks during the holiday season quite often.

Comparatively speaking, Bay Lake Tower and the Contemporary don’t have a ton of decorations. Granted, there’s the Christmas tree outside of the Contemporary Resort (the tallest at Walt Disney World), cool “life-size” edible displays inside, and that huge Mickey wreath on the exterior windows that face the Magic Kingdom, but other than that, it isn’t exactly the Disney hotel that exudes the holiday spirit. On paper, it sounds a lot better than it actually is.

However, it’s not the #2 hotel based solely upon those decorations. There are two other big reasons. First, the Top of the World lounge. This normally does not make my list of the top places to view the fireworks at the Magic Kingdom because of the far right east perspective, but during Holiday Wishes and Fantasy in the Sky (the New Year’s Eve fireworks), it’s a pretty solid view because the perimeter bursts do a bit to help balance out the view. We highly recommend doing Mickey’s Very Merry Christmas Party one night and then watching the fireworks up here (for free!) during a party night that you do not attend.

Second, if you’re visiting Walt Disney World the week before or after Christmas (the busiest weeks of the year), being within walking distance of the Magic Kingdom is an absolute game-changer. When we visited for New Year’s Eve and stayed at Bay Lake Tower, we got to the parks before they first opened at 7 am and stayed for a few hours doing numerous attractions with minimal waits, walked back to the hotel and napped for a bit, and then returned in the evening when things had started to die down and stayed until the park closed (2-3 am). We avoided the transportation gridlock and didn’t lose any time by leaving the park to nap. We got as much done as we would have during a mid-September “value season” visit. Now, not everyone is going to be able to rearrange their (or their kids’) sleep schedules to accommodate this strategy, but even if you’re only able to follow a very loose version of that plan, Bay Lake Tower is a great option for you. Add that to the decent decorations and the great view of the fireworks, and it should be easy to see why Bay Lake Tower managed the “surprise” of landing at #2.

Since the Villas at the Grand Floridian is not yet open, you might be wondering whether this is a little premature. It’s not. Even if the only decoration Disney puts up at the Villas at the Grand Floridian is a sign that says: “Please Refrain From Christmas Cheer Here,” it will become one of the top Disney Vacation Club resorts for trips during the Christmas season. It’s doubtful such a sign will be the only decoration, but any actual decorations should be considered icing.

The reason for this is relatively simple: the Grand Floridian is right next door, and it’s arguably the most beautiful resort at Christmas, especially if you aren’t into the “rustic” look of Wilderness Lodge. Anyone who has been to Walt Disney World at Christmas knows the pros: the life-size gingerbread house and the massive Christmas tree. In my opinion, the Villas will actually be superior to staying at the regular Grand Floridian at Christmas. We’ve avoided the Grand Floridian at Christmas in the past because the main building is an absolute zoo during the holidays. It’s loud and filled with visitors, and I wouldn’t want to potentially get stuck staying in such a chaotic environment (I’m sure you can request a more remote building, but there’s no guarantee you’ll be accommodated). You are guaranteed not to be stuck in the main building if you stay at the Villas, so your room is away from the choas, but you’re still close enough that you can walk to it enjoy that wonderful ambiance. This is going to be a tough one to book year-round, but especially during the Christmas season!

These little touches are carried over to the Villas, where the lobby tree is much smaller but the decorative touches are just as nice. Roaring fireplaces and the most relaxing Christmas background music at Walt Disney World round out the holiday offerings, and if you sit down on one of the comfy chairs near one of these fireplaces, don’t be surprised if that relaxing background music and the crackle of the fire puts you right to sleep.

Until you’ve experienced it, it’s a bit difficult to explain, but this is the one resort-hotel that is truly transportive at Christmas. After spending a few minutes next to the fireplace, you’ll forget you’re in balmy central Florida. It feels more like you’re in a setting that could be home to a “real” Christmas (no offense to you warm-weather state folks, but in terms of Christmas ambiance, snow and evergreens beat palm trees and sunshine…the rest of the year, you win). It reminds me of being back home where I grew up in Michigan, snowed in at a lodge. You’re probably going to spend more of your time here at the main hotel rather than the Villas building, but that’s not a problem since it’s only a 2 minute walk between them. As an added bonus, Fort Wilderness is a peaceful walk or boat ride away, and the decorations there that the RV owners put up are seriously fun.

Even if you’re unable to get your first or second choice, visiting Walt Disney World at Christmas will be a fun time. We like to go the first two weeks in December when crowds are lighter (Pop Warner football can make things a little busier, but it’s still not bad), temperatures are mild, and all of the decorations are up. If you’re not already a Disney Vacation Club member but want to stay at one of these resorts, check out our Guide to Renting Disney Vacation Club Points or if you just want to go “all in,” check out our Guide to Buying into Disney Vacation Club. If you are already a member, make sure you’re on the line with Member Services right at the 11-month window to book your home resort, and then call back first thing in the morning the day your 7-month window to try to change resorts (if your home resort isn’t where you want to stay). We’re not exaggerating the demand for Disney Vacation Club resorts at Christmas. We’ve always had to do either split stays or waitlist to get any of the top 4.

Which is your favorite Disney Vacation Club at Christmas? If you haven’t stayed in any of these hotels, which would be #1 on your list for places to try? Your comments are half the fun, so if you have any thoughts on the topic, share them below!