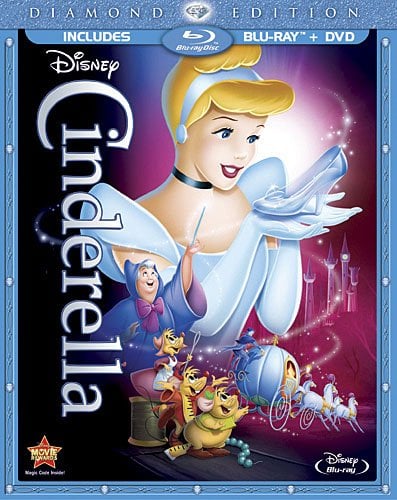 If you have even marginally followed Disney Blu-ray and DVD releases for the past several years, you probably know that this review of the Cinderella Diamond Edition Blu-ray is superfluous. I can’t even recall the last time Disney released a Diamond (Blu-ray) or Platinum (DVD) edition title that wasn’t stellar in just about every regard. Whereas other releases have been more hit or miss, usually containing high quality audio and video but sometimes faltering in the extras department, the twice-yearly Diamond/Platinum edition titles have typically been among the best releases of the year–from any studio. Thankfully, the Cinderella Diamond Edition Blu-ray is no different.

As Cinderella is a stand-out title in the pantheon of Disney releases that has squarely positioned itself as a timeless classic, I’ll spare you the CliffNotes recounting of the story. If you haven’t seen Cinderella, suffice to say, it’s probably time that you gave it a viewing.

To me, the video quality here is nothing short of perfection. The transfer has been expertly cleaned up and Cinderella looks like it could have been released this year (stylistic changes in animation notwithstanding) rather than in 1950. I qualify my opinion with “to me” because I realize there has been some light controversy about the noise reduction, sometimes aggressively applied, Disney has chosen to attempt with many of its decades-old releases. I cannot perceive any loss in clarity or detail done as a result of the noise reduction, and I think it has been applied very carefully and without harm to the transfer. Still, others disagree, arguing that this noise was present in the original release, and as such, should not have been removed. My retort would be that, unlike gritty films that intentionally introduced noise or have allowed it to exist for the “cinematic” quality it gives to films, there was no such intent here, and noise does not enhance the quality of an animated film. If this film were released today, it’s difficult to argue that noise would be present. As such, and since the removal of noise improves the video quality without harming it, I am in favor of the noise reduction applied to the film. Beyond the lack of noise, the colors, contrast, and levels all are gorgeous. Backgrounds are vivid and so detailed that brush strokes can be made out. The transfer here is perfect.

The sound is similarly impressive, and it’s great to see two lossless options: a DTS-HD Master Audio 7.1 surround track for those who want to enjoy an enthralling audio experience and a single-channel DTS-HD Master Audio track of the film’s original mono mix for purists. Smart move, Disney, by catering to both crowds with these two options. I have never had an issue with Disney’s tasteful surround tracks, so the mono mix is not necessary to me, but it’s still good to see Disney offering both options.

A criticism of recent Disney releases is that the vast majority of extras are mere DVD ports. There are a lot of DVD-ported (standard definition) extras here, but there are also several high definition extras exclusive to this release. I’d say the distribution is 60/40 in favor of DVD. The fact here is that the 2005 DVD was a Platinum Edition, meaning that it contained a lot of extras. Add to that the additional features, such as Second Screen, DisneyView, and Backstage Disney: Diamond Edition, and this Blu-ray offers an embarrassment of riches in terms of special features.

Overall, this Blu-ray set should be purchased by any fan of animation. From the transfer to the audio to the extras…to the incredible film, this is a must-own title. Disney once again does not disappoint with its flagship Diamond Edition line.