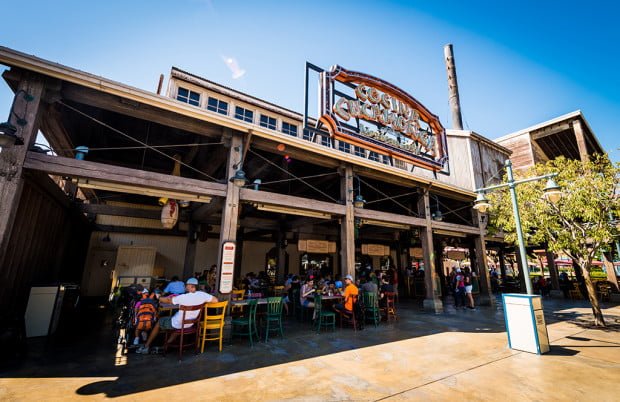 Cocina Cucamonga is a counter service Mexican restaurant in Disney California Adventure’s Pacific Wharf at Disneyland Resort. This review features photos of the food, plus my thoughts on the cuisine here, and to whom this purported “Mexican” restaurant will most likely appeal. The menu here has a lot of options, including tacos, burritos, tamales, salads, and more.

I mentioned this in the Lucky Fortune Cookery Review, but I’ll reiterate: the Pacific Wharf “land” is very simple. It’s essentially an outdoor mall food court where there are multiple places with ordering windows and an abundance of common seating in the middle. There is no indoor seating, nor is there any theming to speak of at Cocina Cucamonga.

As a preface to this review, how you view the food at Cocina Cucamonga is largely going to be dictated by perspective and background. In terms of background, if you’re a Disneyland local living in Santa Ana, for example, or anywhere that has an abundance of Mexican fast food, this restaurant won’t strike you as even remotely authentic. If you’re from a small town in the Midwest where the only Mexican food around is Taco Bell, your opinion of Cocina Cucamonga will likely be much more favorable and issues of authenticity aren’t likely to arise. Regardless of your background, if you approach this restaurant from the perspective of whether Cocina Cucamonga has quality cuisine, your opinion is likely to differ from someone who approaches it from the perspective of whether it has authentic cuisine.

With those caveats about the restaurant out of the way, let’s take a look at the food, and see how it holds up… 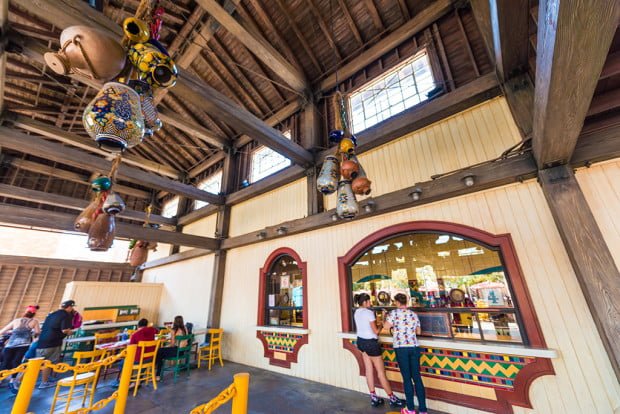 The above preface isn’t a setup to giving Cocina Cucamonga a pass for having bland food. Rather, it’s to frame this review, which is based mostly on overall quality, not authenticity. There is no question that this places serves largely Americanized food that many Californians will recognize as being mild. 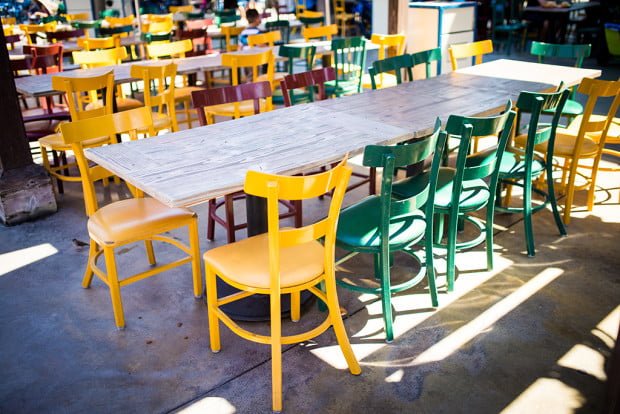 My favorite thing about this restaurant is its tongue-twister of its name, that is probably derived from the legendary Chupacabra, which is a totally real animal that is native to Southern California. Actually, I think it might be named after the city of Rancho Cucamonga, but I’m not really sure. Thanks to writing this review, I now know how to spell the name of the restaurant, even if I can’t pronounce it. Moving on… 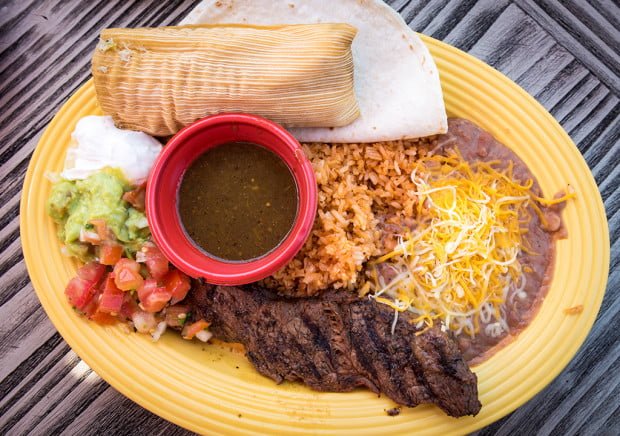 With that said, it’s important not to conflate mild for bland. I think the food here is definitely mild, but I think it’s also very good quality for a counter service restaurant, and is not lacking in the flavor department. To put it into perspective, Cocina Cucamonga is significantly better than La Cantina de San Angel in Epcot’s World Showcase. 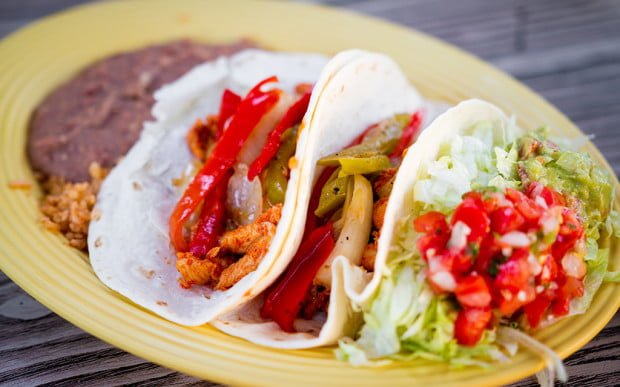 In terms of food, first up is the Soft Tacos Monterrey. This menu item isn’t exactly going to reinforce my point, as this is about as boring as boring gets. These are simply basic flour tortillas with beef, chicken, or roasted veggies (pictured above). Fortunately, there are refried beans, guacamole, sour cream, and (most importantly) Pico de Gallo to make them more interesting. Even if you are timid when it comes to spicy food, you can do better than this. 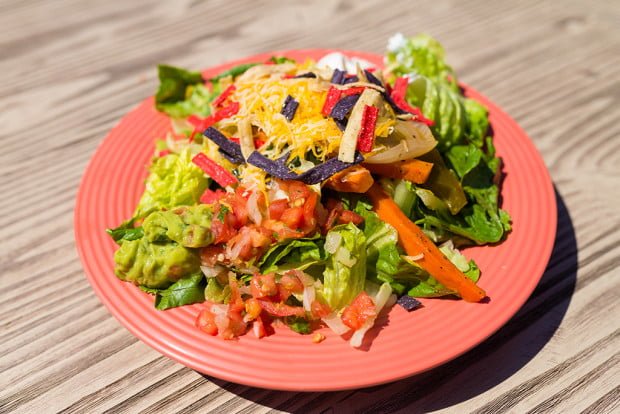 Here’s the Hacienda Chicken Caesar Salad. It’s a bit more elaborate than the tacos above, and (I assume) a healthier option. The ingredients here also seemed higher quality to me, with fresh romaine lettuce coupled with roasted vegetables and a nice Pepita Caesar Dressing. I’d call this a so-so option, especially given that I feel Disneyland Resort has really upped its salad game as of late. This doesn’t change the fundamental fact that salad isn’t food, but if you like salad, it is nice to see. 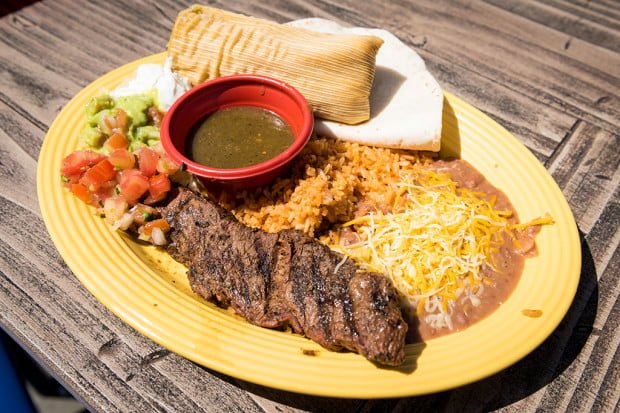 Now we get to the two highlights of the menu, in my opinion. First up is the Carne Asada and Chicken Tamale. 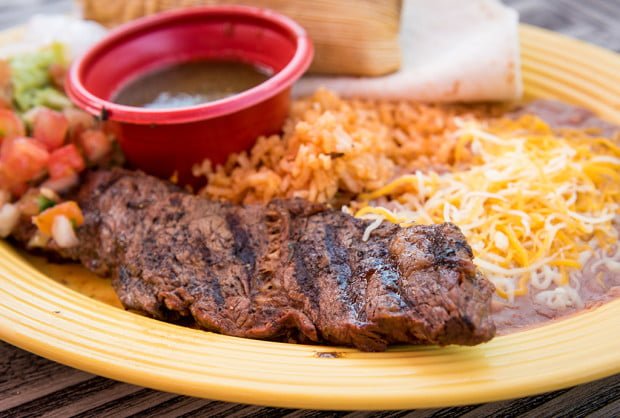 The carne asada here is actually quite good, especially for counter service. It’s reasonably tender, well-seasoned (but not overly so), and perfectly cooked. Size-wise, I wish it were a bit larger, but I guess that’s what you get with a counter service meal.

The downside to this dish is the tamale. I don’t think I’ve ever had such a dry tamale. It had a good flavor, but it’s tough to get past that dryness, which almost made it awkward to eat, if that makes any sense. 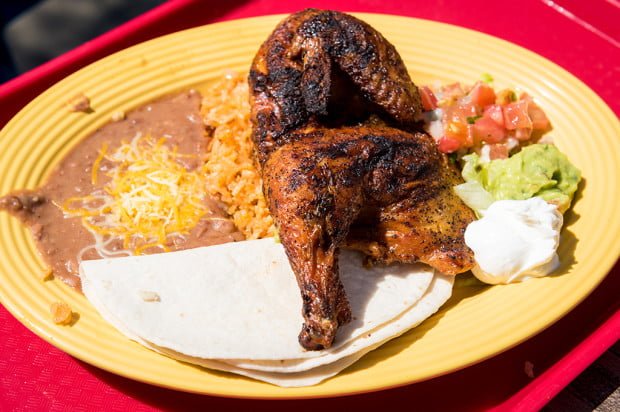 The other star of the menu, and what I’d consider to be the best dish here overall, is the Fire-grilled Citrus Chicken. This isn’t just the best dish at Cocina Cucamonga, I think it’s one of the better dishes at Disneyland Resort. The chicken has a great taste thanks to the garlic, cilantro, lemon, and lime marinade. It has a really robust flavor as a result, and it helps that the chicken is tender and quite sizable. This is one of those entrees that two lighter eaters could split. 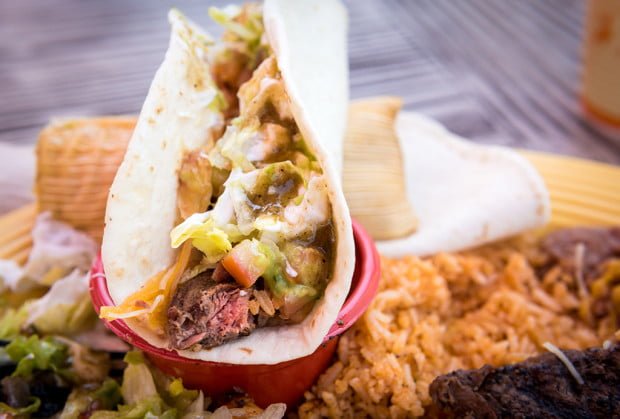 With these last two dishes, I like to make tacos out of some of the meat, and I think those turn out considerably better than the dedicated tacos menu item listed above. Although these two dishes are on the pricier side, they are very filling and I think they work out to be much better options than the cheaper menu items.

Overall, I think Cocina Cucamonga is a solid option in Disney California Adventure if your expectations are properly set for “quality food” rather than “authentic Mexican food”, and you order one of the higher quality items on the menu. With that said, it remains the weaker Mexican restaurant at Disneyland Resort, being inferior to Rancho del Zocalo (read our review of that restaurant), which has many similar menu items, plus additional worthwhile options. If you’re only wanting to do one Mexican restaurant at Disneyland Resort, opt for Rancho. Despite that, Cocina Cucamonga is still one of the top 5 counter service restaurants at Disney California Adventure–a park with some pretty strong dining options.

What do you think of Cocina Cucamonga? Do you have a favorite plate here? Had you even heard of it before this review? Share your thoughts in the comments!