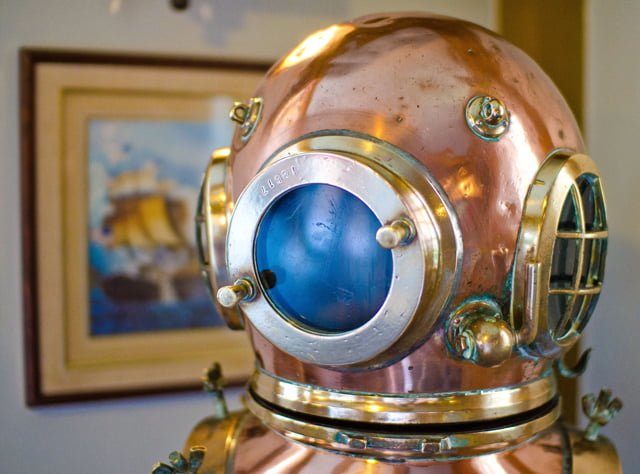 The menu at Columbia Harbour House is actually fairly diverse, well, diverse if you like seafood. Perhaps “robust” is a better term for the menu here, and mostly devoid of the standard fast food options you’d expect to find in a theme park restaurant.

For years, we avoided Columbia Harbour House because it was mostly deep fried “boat trash,” with a little bit of ocean-dwelling food covered in a lot of breading. It was basically the theme park version of Long John Silver’s, except perhaps not even as good. In the last few years, the menu and quality has improved significantly, making Columbia Harbour House one of our favorite counter service restaurants in Walt Disney World.

Why is Columbia Harbour House recommended? Let’s take a look inside… 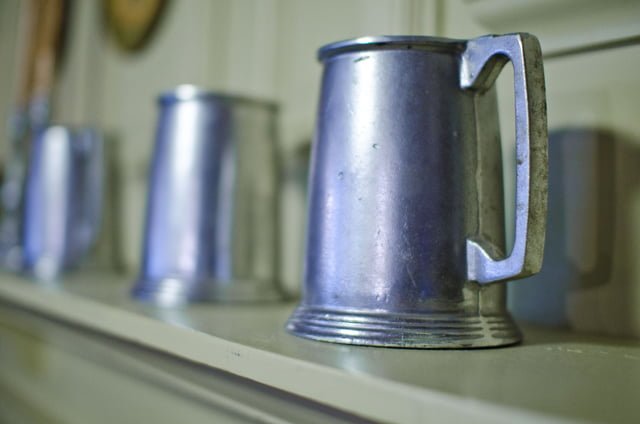 While food quality has varied over the years, the ambiance at Columbia Harbour House has been consistently awesome. It feels like a vestige of a bygone era not just in terms of its seaside New England charm, but in a long-gone era where the Magic Kingdom felt quaint and intimate. Trinkets and bric-a-brac adorning shelves might seem like minor things, but they most definitely give it a warm, inviting vibe.

One of the worst kept secrets in Walt Disney World is the tranquil upstairs dining area at Columbia Harbour House. Despite everyone and their brother sharing this as a top “secret” for dining at Walt Disney World, this upstairs area still remains relatively un-crowded at most times. 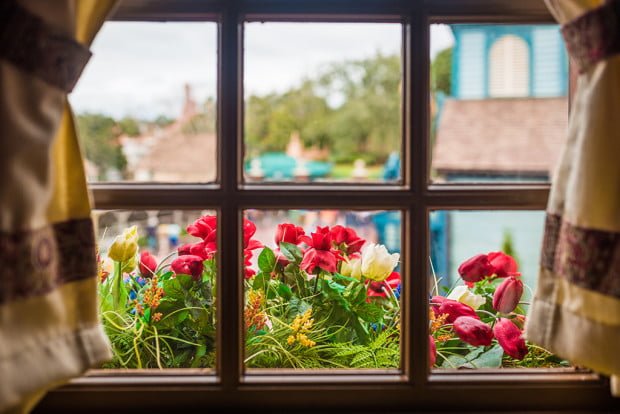 Much like the entire restaurant, this upstairs area has a lived-in feel, as if you’re dining at a hole-in-the-wall locale in New England. I don’t know of many hole-in-the-wall restaurants that have the design sense of Columbia Harbour House or have the money to purchase so much art and other pieces on display at the restaurant, but it still pulls off this feel very well. I really love these upstairs nooks as places to get away from the crowds (and the views out into the park are nice up there, too).

The place is literally crammed with details, and although it’s nicer than what you’d find in most coastal restaurants of this type, it’s very transportive. The only thing to remind you that you’re in a theme park is the crowds on the first floor (Columbia Harbour House can get BUSY during the lunch and dinner rushes) and the views out those windows. 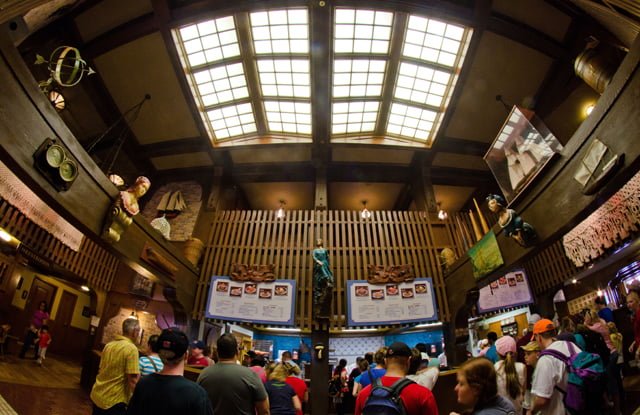 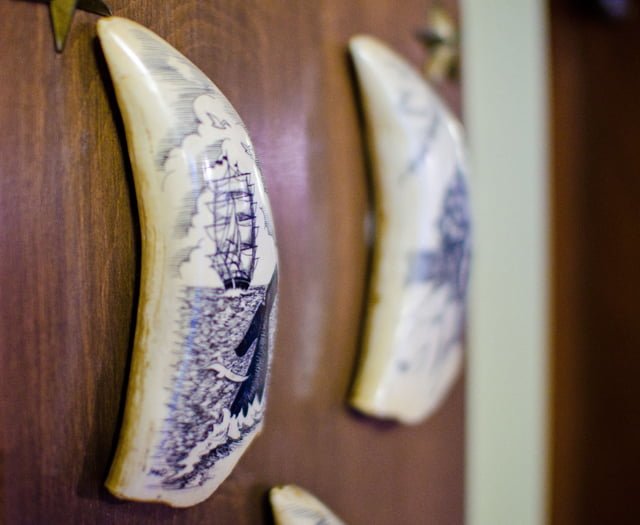 As far as food goes, Columbia Harbour House has decent variety, although some items on the menu are noticeably smaller than others (and all prices seem a tad higher than Pecos Bill or Cosmic Ray’s, but it is seafood, so that should come as no surprise). Seafood isn’t typically something most people associate with low-cost and quick preparation, so I think a lot of people are skeptical of fast-food restaurants serving seafood.

Although it’s not nearly as good as Flying Fish Cafe or a nice table service seafood restaurant at Walt Disney World, the food at Columbia Harbour House is surprisingly good for counter service seafood. Not everything is great, but there are plenty of solid options. 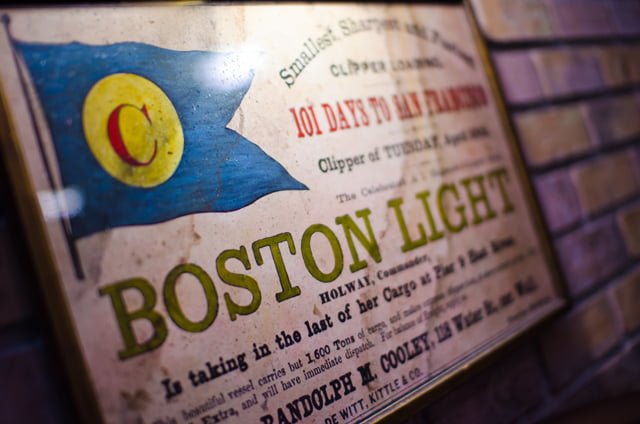 The first requirement, choosing something that tastes good, is quite easy, especially for those who enjoy seafood. Even the ‘fried stuff’ here is pretty delicious. 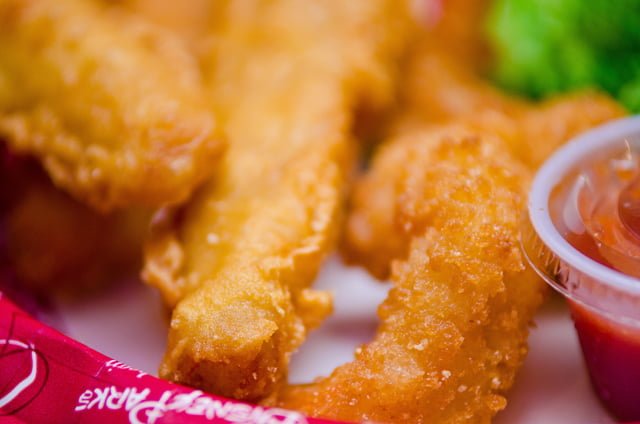 The second requirement, choosing something filling, can be trickier if you’re a big eater, especially as the higher quality items can sometimes have smaller portions. This is something to keep in mind before ordering the salmon or lobster roll. 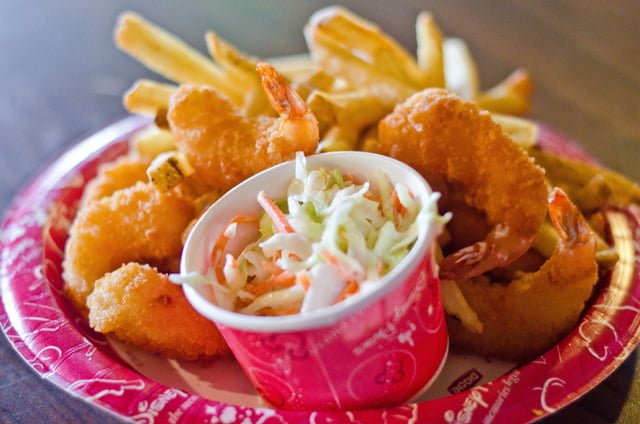 On one visit, I had the Shrimp Basket. It contained a mountain of shrimp, plus coleslaw and fries. The shrimp were all fairly large, and not because they were overly breaded (the breading was about perfect).

The fries were your typical Disney fries (you probably already know whether you love them or hate them) and the coleslaw was also pretty good. I’d say it could have used a little more dressing, but that’s just my personal preference. 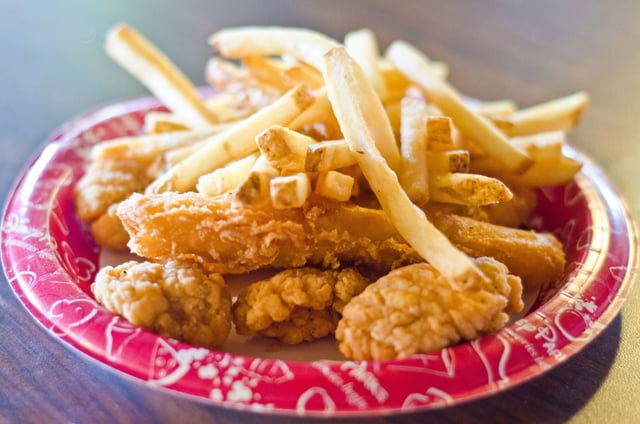 Here’s the Chicken Breast Nuggets & Fish plate. This includes a few large pieces of fish, plus a number of smaller chicken bites, and fries. This is a decent, filling option that will appeal to a broad selection of guests.

Although it’s not that ambitious, the chicken and fish are pretty good. I wouldn’t make it a point to order this as you can find these options all over the place and Columbia Harbour House has much more interesting options, but there’s nothing wrong with it. 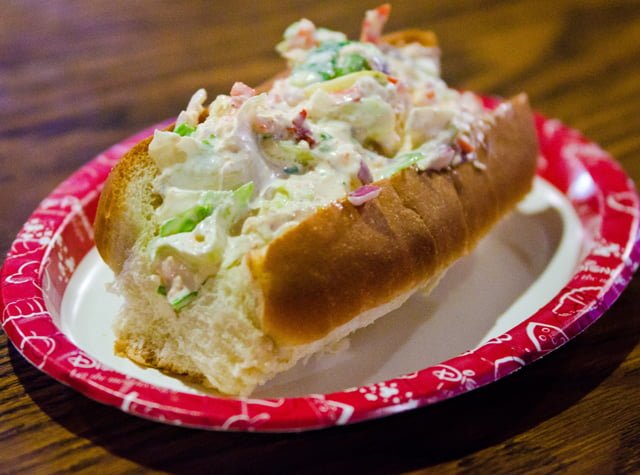 More recently, we’ve tried a few other options at Columbia Harbour House. When its menu changed and the Lobster Roll was added, I debated getting it at length. Surely a Magic Kingdom counter service restaurant could not do a lobster roll well. Some of them can barely do a burger right! Much to my surprise, it turned out to be quite excellent and very filling. I was actually shocked that it was so good, especially given that it was a lobster roll at a quick service restaurant.

Now, if you’re from Maine and you eat lobster for 5 meals per day, this might fall flat for you. It does have a decent amount of dressing and some filler, but it also has plenty of meat, great taste, and a surprisingly high quality bun. Those of us who don’t live and breathe lobster will likely be very pleased. I certainly was impressed with mine, and on return visits with friends, I’ve noticed that the portion size has seemingly gotten larger, which is a rarity for Walt Disney World. The high price was justified, and I will definitely be ordering it again. 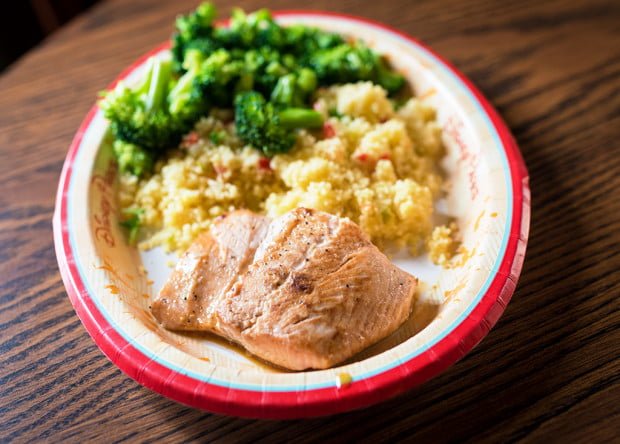 After seeing how well Columbia Harbour House did a lobster roll, I found myself giving serious thought to trying their grilled salmon. A counter service restaurant can’t possibly do salmon well…or can it?! Well, it turns out that it can. On my most recent visit to Columbia Harbour House, I ordered the Grilled Salmon. It had a nice, grilled lemon butter taste, flaked apart easily, and wasn’t overcooked. Quite frankly, I was shocked by how good this salmon was.

Granted, it didn’t taste like it was fresh, wild caught salmon overnighted from Alaska prepared on a cedar flank, but it also didn’t taste like someone got a big bag from the freezer aisle at Sam’s Club and microwaved them in the back of Columbia Harbour House and then stuck them under a heat lamp until ordered. It was much better than expected for a counter service grilled salmon plate. (Although I do admit I was envious when I saw the monster lobster rolls my friends ordered!) 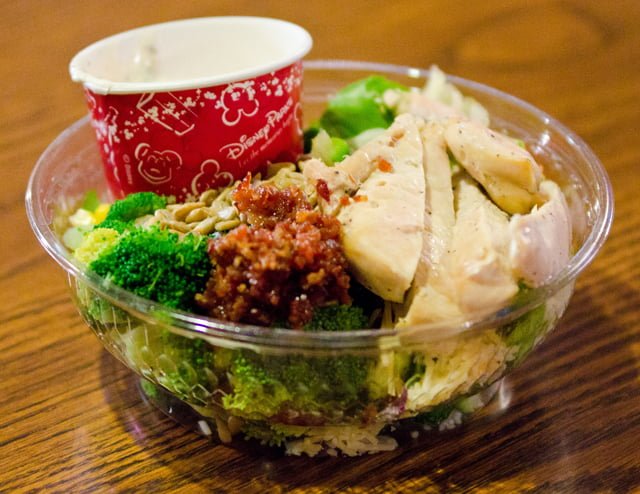 For a healthy option (bacon is healthy, right?) or a change of pace from seafood, here’s the Broccoli Peppercorn Salad. It’s a large and interesting salad with more than just iceberg lettuce and a few vegetables to garnish, and it is tasty and filling. Definitely one of the more hearty salads available at Walt Disney World. 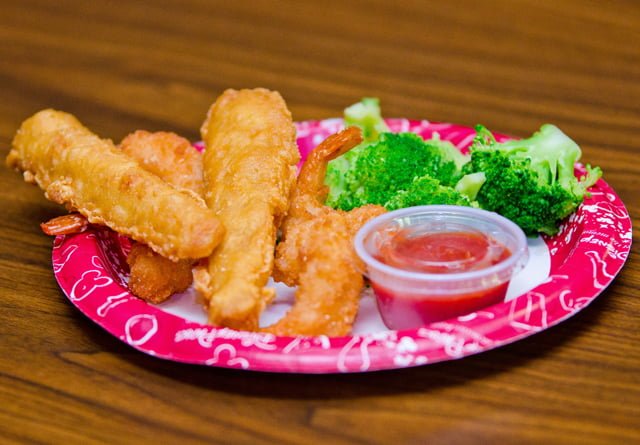 Overall, we think Columbia Harbour House is a gem. It has some basic menu options, to be sure, but if you dig into the menu you’ll find some stuff that’s unique and ambitious for a counter service restaurant, especially one in the Magic Kingdom. Given that it’s one of the most popular restaurants in the most popular theme park in the world, it’s tough to call it a “hidden gem,” but that upstairs seating area definitely is, as are some of the less-mainstream menu items. Ordering the “right” dishes at Columbia Harbour House makes a big difference, and enjoying your meal in a quiet spot among all that great theming makes Columbia Harbour House a restaurant that is tough to beat. It is a little pricey and there are some sub-par options on the menu, but these are minor qualms, all things considered. We highly recommend this restaurant to anyone, even those who aren’t seafood fans, as the menu offers several healthy and non-seafood items.

Do you agree that Columbia Harbour House is a Walt Disney World dining gem, or are you not a fan? Have you tried the glorious upstairs seating area? Share your thoughts in the comments!