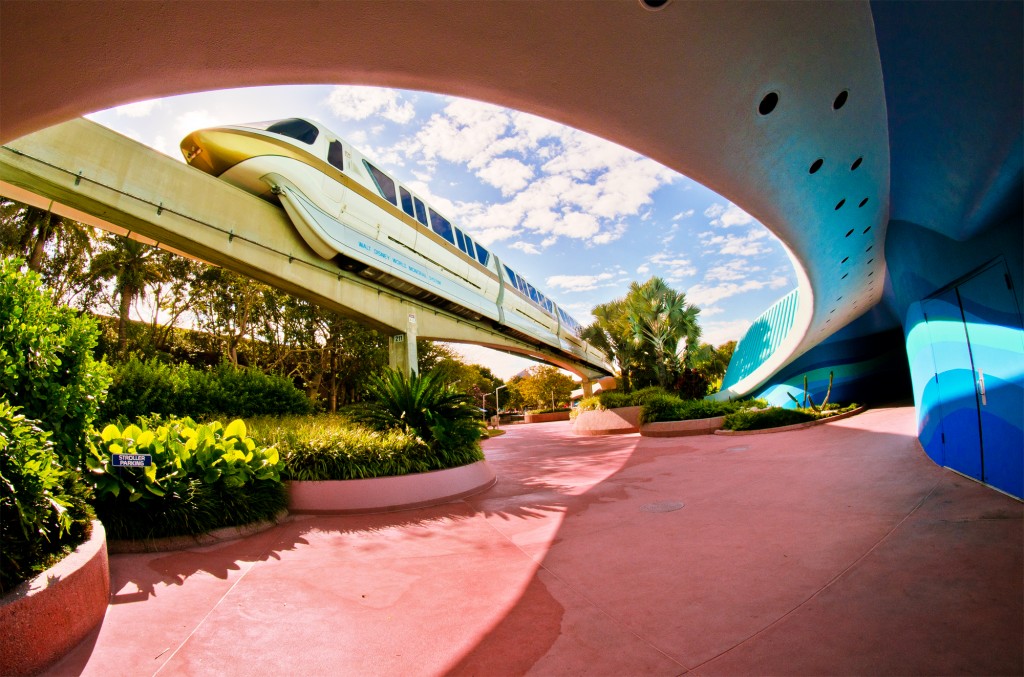 Our original Coral Reef Restaurant Review was one of this blog’s first posts, and although we’ve updated that with new photos and thoughts about Epcot’s coolest restaurant since then, this Walt Disney World dining spot was definitely in need of revisiting. In this review, we’ll do exactly that, sharing thoughts from our recent Coral Reef lunch in 2018.

In terms of basics in case you’re not familiar with Coral Reef Restaurant, it’s a table service restaurant located in Future World, participating in the Disney Dining Plan as a 1-credit option. This location’s main draw is that an entire wall of the restaurant offers a view into the Living Seas aquarium, giving the experience a dining ‘under the sea’ vibe. This is a huge selling point, but with a wealth of World Showcase dining options, Coral Reef is often overshadowed.

The most consistent thing about Coral Reef has been its inconsistency. One thing that we’ve underscored in the past is that our experiences at Coral Reef have been a mixed bag. We’ve had both excellent meals and totally uninspired ones. Great service and inattentive service. Despite this, we’ve always recommended Coral Reef.

Our main reason for this recommendation has been Coral Reef’s atmosphere. We love the view into the Living Seas aquarium, and tend to linger at Coral Reef longer than other Walt Disney World restaurants (even though they often try to rush meals for fast turnover) because we’re transfixed by the aquatic life swimming around in view of our table. It’s one of the coolest elements of any restaurant at Walt Disney World.

For this particular meal, we arrived early to our 11:30 a.m. Advance Dining Reservation, and we politely requested a table close to the aquarium. We were one of maybe 4-6 other parties at the restaurant when it opened, and our request was enthusiastically accommodated. 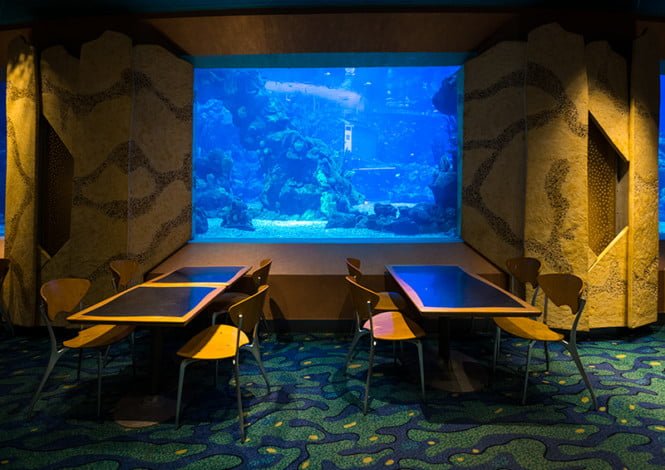 Oddly enough, we were seated right next to another table of two, in what struck me as an awkward arrangement with out table in the middle of the walkway. I thought this was a new thing meant to cram more tables into Coral Reef, until I found my photo from a few years ago (below) showing the same table arrangement. I’m not sure when they added these extra tables (maybe it has always been this way?), but I could swear there was not always a row of tables in the walkway there.

Irrespective of when/if this changed, it’s a bit awkward being in a nearly empty restaurant and being seated right on top of a table of patrons next to you. For the first 20 minutes we were seated, we were the only two parties in this first “row” of seating. It’s one thing when the restaurant is full and light noise helps separate conversations, but this felt like we were all sitting together. 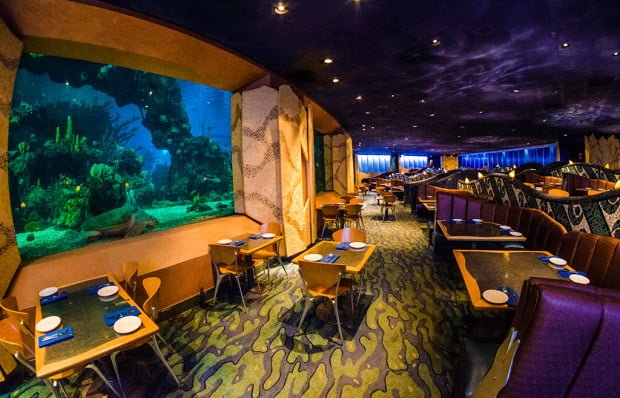 Whatever. We were mostly there for the turtles, stingrays, sharks, etc. anyway, so we kept our conversation to a minimum and just gazed into the tank (also awkwardly, since we had to look right over the table next to us to see the aquarium) rather than doing much talking.

Next up is service. We don’t normally comment on service in Walt Disney World restaurant reviews because it (like Coral Reef!) is incredibly inconsistent. We commented on it in our last review of Coral Reef because it has been our experience that the restaurant is understaffed.

This was reaffirmed during our lunch. At the start of the meal, our server was incredibly attentive. As the restaurant filled, this was less the case, and by the end of our meal, we actually had to flag him down to request the check. We don’t blame the server for this–it was not his fault he’s being stretched too thin–as it’s clearly a matter of staffing. 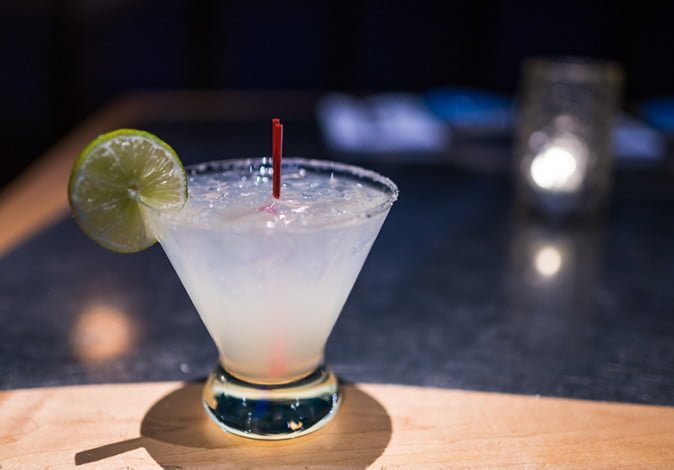 Now we’ll turn to our meals, which were an unexpectedly positive surprise. We were on the Deluxe Disney Dining Plan for this meal, so we ordered drinks.

As was the case across the board with our Deluxe Dining Plan experience, both of our mixed drinks were weak and sugary. Walt Disney World drinks at ‘regular’ restaurants have been trending this way for a while, and I’m guessing their inclusion on the Disney Dining Plan has pushed that even further. 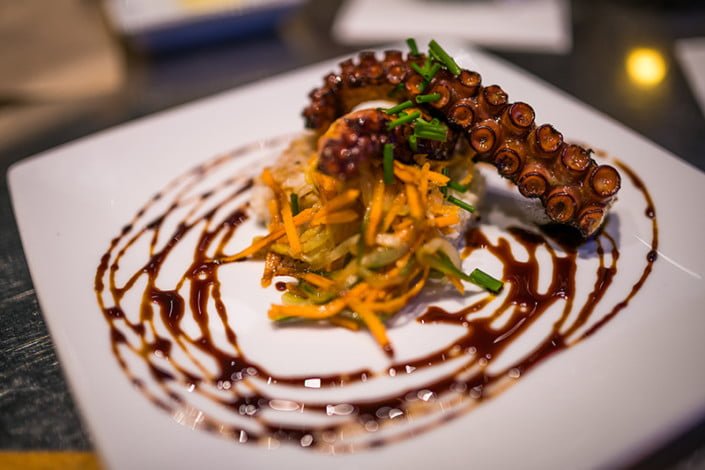 For my appetizer, I started with the Charboiled Octopus with nori sushi rice, sesame slaw, and soy reduction.

This was excellent. The octopus was shockingly tender and flavorful, with the light char offsetting the normal texture of octopus. The presentation was also excellent, and accompaniments helped make this a satisfying dish. We’d definitely order this again, and highly recommend it. 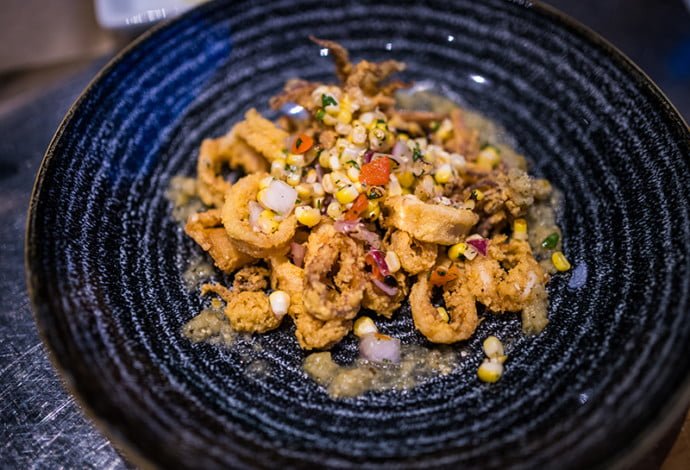 As we’ve mentioned countless times, we’re suckers for calamari. We found this to be really good with tender calamari and a light amount of crisp batter. The corn relish was a nice and interesting touch, differentiating this from other calamari at Walt Disney World. 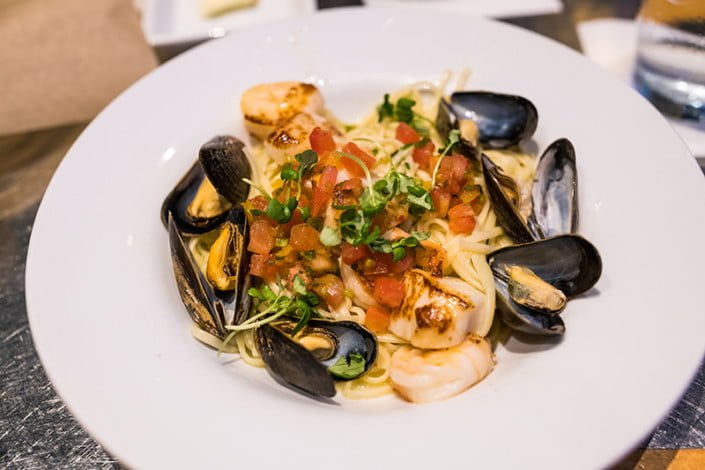 For my entree, I had the Seafood Scampi, consisting of scallops, shrimp, Prince Edward Island mussels, diced tomatoes, and pasta with scampi butter.

This is not an inventive dish, as the flavors are all fairly straightforward, but it was really good. The lightness of the pasta meant there was no masking of the seafood, requiring it to stand on its own–and it did. Again, I was surprised by the overall quality of the ingredients used here and, again, I’d order this on a subsequent visit. 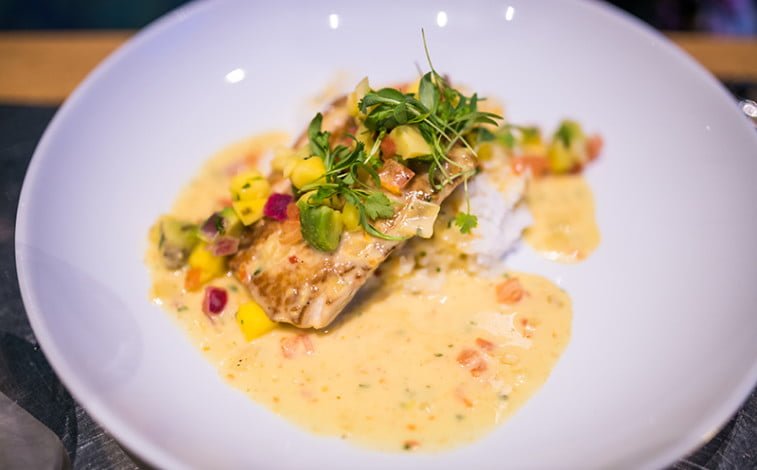 This has been one of the menu mainstays at Coral Reef for a while, and it’s a fairly safe option. Sarah wasn’t overly-enthusiastic about the fish itself, but liked the preparation a lot. I enjoyed it quite a bit more than she did, but I also view mahi as an “it is what it is” fish–which is to say it’s not something I’d normally order. 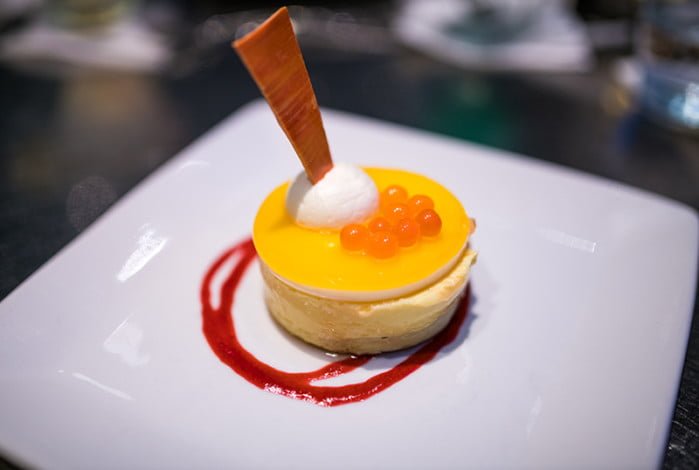 In the past, the Chocolate Wave has been our go-to dessert at Coral Reef. Were we paying out of pocket and not planning on writing a review, we would’ve ordered one of those and split it.

Instead, I ordered the Key Lime Tart. While what I received (above) does not resemble any other photos I’ve seen of it online, it was key lime-ish and tart-ish, so I guess that’s it? Reasonable minds could differ, but I found this to be a bit too far on the tart side, and the sweetness of the tropical fruit glaze made for a jarring–rather than pleasant–contrast. It wasn’t bad, but it’s also not something I’d order again. 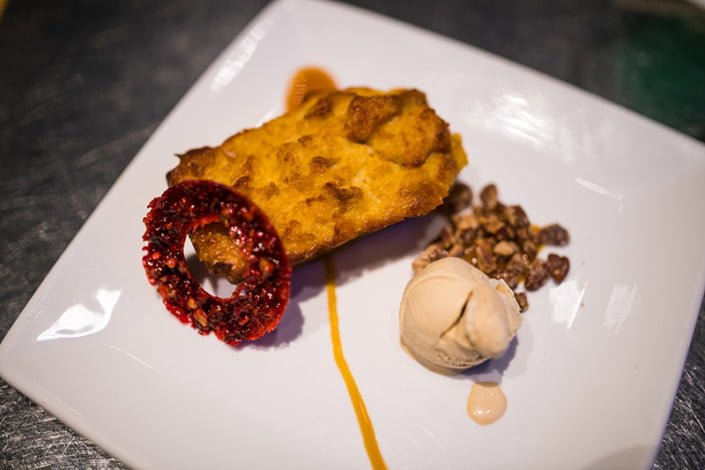 Despite the cool presentation, this dessert was only fine. We’re both suckers for bread pudding, and we enjoyed this interesting twist on it, but it could’ve been better. The ‘bread’ was a bit too crisp, and I’m not sure citrus is a flavor that works with bread pudding. This was also not something we’d order again.

Dessert aside (a ‘problem’ of our own creation given that we could’ve ordered the Chocolate Wave for a surefire positive conclusion), I’d say our meal at Coral Reef Restaurant was very good–about the best we could’ve hoped for at this location. 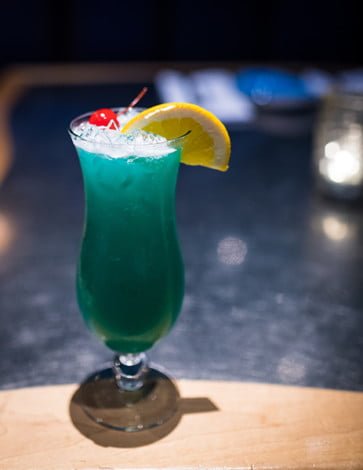 Even in light of our very good meal at Coral Reef Restaurant, I would not call it one of the elite seafood restaurants at Walt Disney World. At its absolute best, Coral Reef still does not measure up to Flying Fish or Todd English’s Bluezoo, both of which are within walking distance of Epcot in the Crescent Lake area.

Keep in mind that is at Coral Reef’s best. At its worst, Coral Reef is not even remotely on par with both of those alternatives. In other words, if the cuisine at this hit or miss restaurant is an absolute home run, it’s still only the third-best seafood restaurant in the Epcot area. That’s something important to keep in mind if food quality is your bottom line. (Also worth noting: Coral Reef is the cheapest of the three.) 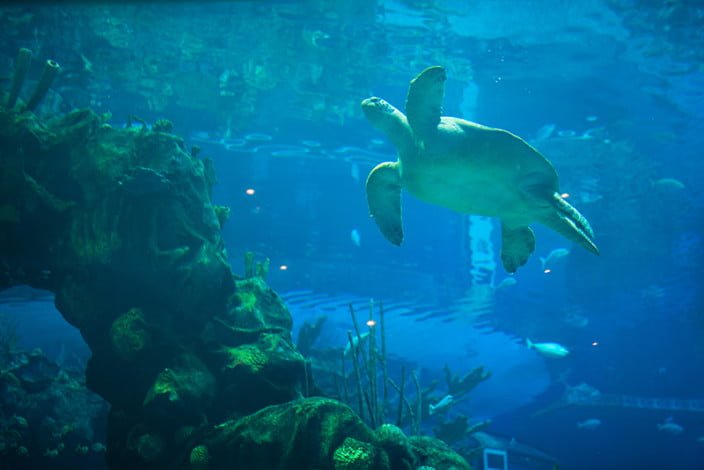 Whether Coral Reef is a restaurant you should book thus comes down to how much you value the novelty of the panoramic window views into the Living Seas aquarium. We value this a lot, and have dined at Coral Reef Restaurant in spite of some mediocre experiences over the years because of how much we enjoy the aquarium.

It is a bit unfortunate that Coral Reef is often loud and the tables are cramped together in some spots. When empty, Coral Reef has a wonderful moody and romantic under the sea vibe, and in terms of the setting, it could be a Signature-caliber option if Disney chose to take it in that direction. (I highly doubt that’ll ever happen, but I can dream.)

Nevertheless, there’s something special about enjoying a meal while gazing into the Living Seas aquarium. In this regard, Coral Reef Restaurant scores big points for us. Perhaps we overemphasize this feature of the restaurant as compared to others (Coral Reef makes our Top 10 Themed Restaurants at Walt Disney World due to the aquarium), but if watching sharks and turtles while eating a Chocolate Wave isn’t awesome, I don’t know what is.

Ultimately, I don’t think this experience alters our calculus on Coral Reef. We were pleasantly surprised by the meal itself–and would put it among our best meals at the restaurant–but other aspects of the experience felt like more of a mixed bag than normal. As long as that aquarium is there and offers glimpses into the underwater world of the Living Seas, we’ll continue to dine at Coral Reef Restaurant, and will recommend it with the caveats listed above.

What do you think of Coral Reef Restaurant? If you’ve dined here before, has it been mostly ‘hit’ or mostly ‘miss’ for you? Where does Coral Reef rank in terms of dining at Walt Disney World for you? Is the aquarium enough to overcome Coral Reef’s other shortcomings for you? Any questions? Hearing your feedback about your experiences is both interesting to us and helpful to other readers, so please share your thoughts or questions below in the comments!