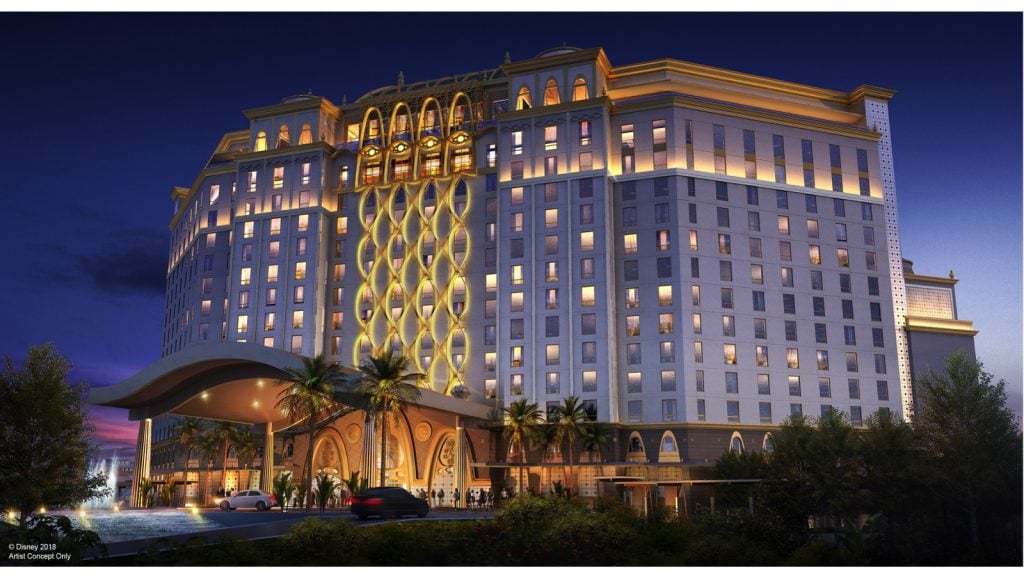 A lot has changed since our last Construction Springs Resort Construction Progress Report a couple months ago, both in terms of progress on the 15-story hotel tower and over-the-water bar & grill, but also as to what’s known about the newest hotel at Walt Disney World. In this update, we’ll cover the latest details–including an opening date–and also take a stroll around Coronado Springs to see how things are looking now.

Let’s start with the latest official news from Walt Disney World on Gran Destino Tower, which is the newly-announced name of this addition. Gran Destino Tower will be completed and open in July 2019, and will serve as the new main entrance point for guests visiting the resort. Reservations will open November 27, 2018 for Gran Destino Tower, so presumably we’ll have a firm grand opening date on Tuesday.

Gran Destino Tower will add 545 new guest rooms (including 50 suites) to Coronado Springs Resort, and will feature a two-story lobby. In addition to the over-the-water bar & grill, a themed table-service restaurant is also planned for the top of Gran Destino Tower, which will offer incredible views of Walt Disney World, and presumably all of the resort’s fireworks shows–at least from a distance.

It’s easy to criticize Gran Destino Tower and make cheap shots. The concept art makes it look bland yet ostentatious; the same type of style employed by casinos to convey an aura of wealth and prestige to patrons who themselves live in McMansions and prefer bigger and bolder over subdued style and design.

As for Grand Destino Tower, there’s nothing necessarily wrong with the name (presumably, it translates to ‘great destination’), but even it reminds me of the surplus of casinos with “grand” in the name. And we’ve already complained of the site-lines and scale of the new tower as compared to the existing resort, so we won’t rehash that here.

Perhaps the finished product, particularly the interior, will look tasteful and nice, though. We are willing to reserve judgment on that, especially after spending some time at Caribbean Beach Resort recently. That has been Walt Disney World’s best resort re-imagining to date, and proximity of the Riviera Resort aside, the changes there are unequivocal improvements. 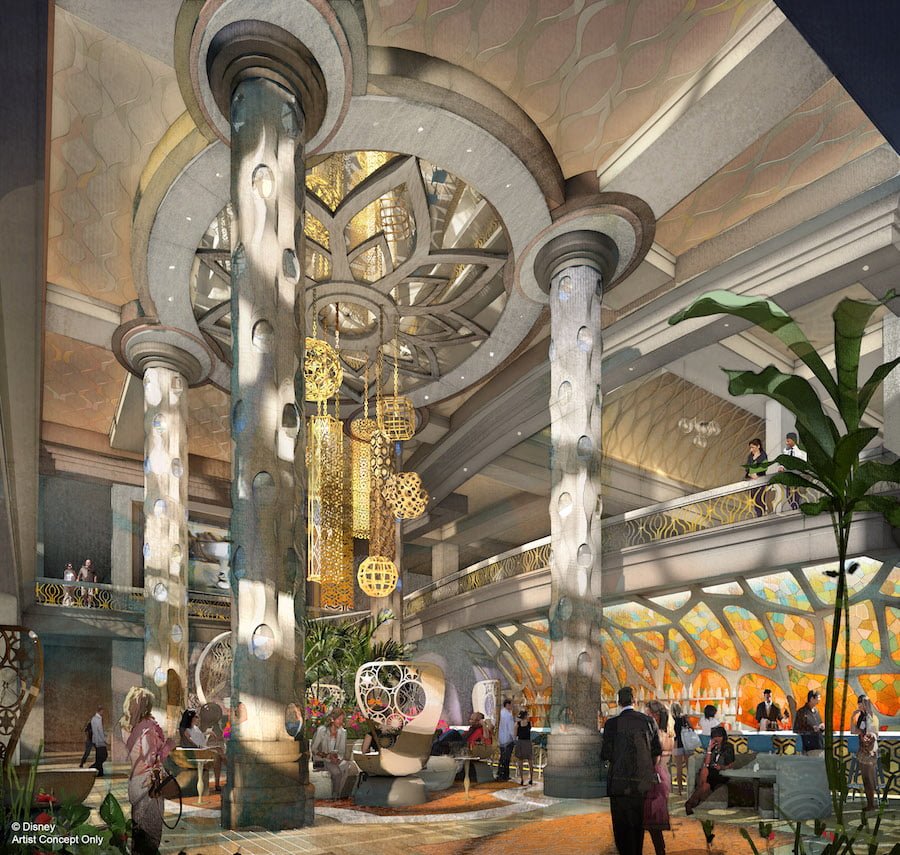 You know what, though? It doesn’t matter if the design is ambitious or dull, tasteful or ostentatious. Virtually everyone staying at Coronado Springs is going to want to stay at the Gran Destino Tower. We are realists, and recognize that casual guests will far prefer this to the sprawling, few-story each outlying clusters of rooms. It may not be as pronounced of a difference as staying in the Contemporary A-frame versus the Garden Wing, but we don’t doubt that the preference will exist, and pricing will reflect that.

Fans like us can complain about what’s happening to the thematic integrity of Coronado Springs, but the expansion here is clearly a matter of function over form. The most consistent complaint we hear about three of the Moderate Resorts is that they are way too spread out. (Followed closely by internal transportation, a direct consequence of the layout.) Walt Disney World unquestionably has more and better feedback on this issue–and it wouldn’t surprise me if there’s actual data showing that guest satisfaction drops the farther people are from the main building at these resorts.

At Caribbean Beach, attempts to rectify this have been made by adding Coke Freestyle machines, small marketplaces, and a new restaurant to the outlying building areas. The check-in and Centertown areas have also been consolidated under one roof, and soon, two gondola stations will also improve the transportation options for those in outer buildings.

At both Coronado and Caribbean Beach, the footprints of the resorts have effectively been consolidated. Moreover, fewer guests at both will now be far from important amenities. “Serious” fans may not like some of the other ramifications of the development at these resorts, but most first-time or casual guests won’t bat an eye. They will be more satisfied with having to walk less at their resort, and will appreciate the more “luxurious” look of their resorts. 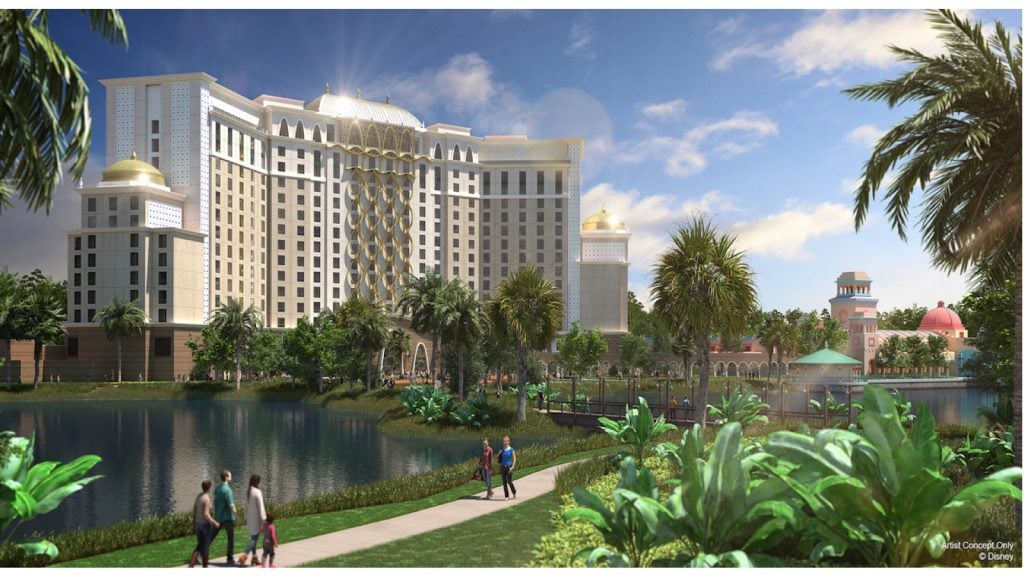 This isn’t to excuse Disney’s approach to Coronado Springs. More than anything, we’re saying “it is what it is.” I may not totally like the decisions being made to expand and rework Coronado Springs, but I understand at least some of the rationale as to why they’re being made. In fairness, while I like Coronado Springs well enough, I don’t have a strong sentimental attachment to it. (My reaction to changes at Caribbean Beach was less measured and more along the lines of, “IF THEY RUIN THIS TROPICAL OASIS, WE RIOT.”)

Either way, I get why a seemingly out of place tower is rising amidst a slew of 2 to 3-story buildings. Maybe back when Disney built hotels in the sprawling, clustered style, there was more of a market for them? Maybe they were doing so to create a more themed, resort-like experience? Maybe it was a way of cutting costs? Maybe all of the above.

Whatever the motivation(s) decades ago, that approach has clearly fallen out of favor in the intervening years. There are likely a number of reasons why, but the easiest one to point to is the sense of urgency in the theme park experience. What was once the “Vacation Kingdom of the World” is now the “Do As Many Rides As Possible to Get Your Money’s Worth Because This is the Most Expensive Day EVEEEERRRR! (of the World).”

It’s an incredibly safe bet to say people spend less time at their resorts than they did a decade or two ago. It’s also pretty likely that the time spent at the resort is more likely to be purpose-driven: shower, sleep, eat, and get the the transportation. Compact or tower-style accommodations definitely make two of those things easier.

This is not to say that’s what everyone prefers. It’s probably not difficult to tell that I love Caribbean Beach from the tone of posts about it, and that’s in large part because of the sprawling layout. Walt Disney World still invokes Walt’s ‘blessing of size’ quote on a regular basis, and one of the ways I think that’s evident is in larger resort-style accommodations, rather than tower hotels.

Each approach absolutely has its place, and some of the nicest hotels in the world are in generic skyscrapers that have zero interesting exterior design. For the most part, that’s out of necessity. In Central Floria, no such necessity exists, and large resorts with lush grounds have been one of the hallmarks of Walt Disney World. Unfortunately, as long as visits to Walt Disney World are less about vacationing or relaxing and more about ‘accomplishing stuff,’ it’s unlikely we will see a reversal of this trend.

Okay, so that ended up being quite the long and rambling commentary; now let’s turn to the construction photos. Most of these speak for themselves, so I’ll keep this brief: 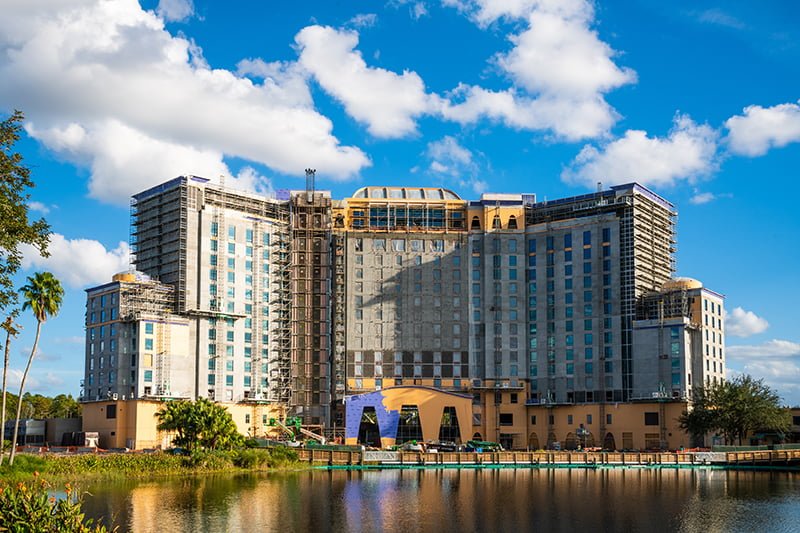 No work was being done on the day we visited, so it’s tough to tell what noise is like, but interior work is definitely underway, so sound should be less and less of an issue with each passing month. 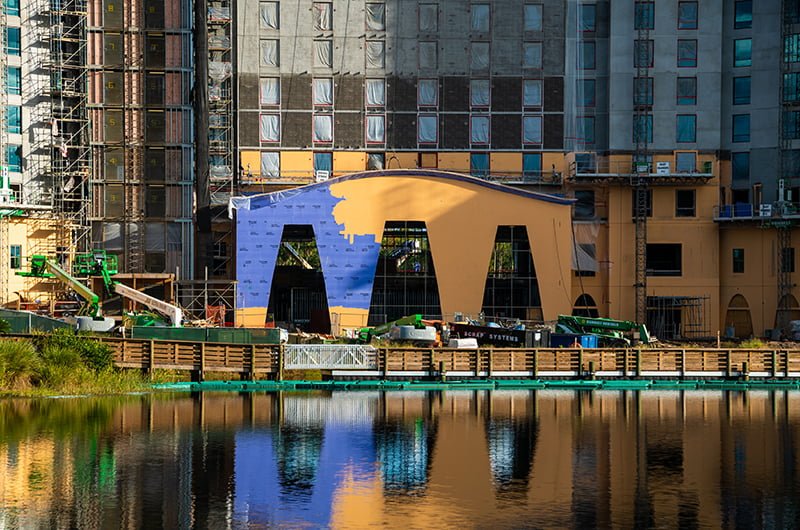 A close-up of the two-story lobby from the outside. 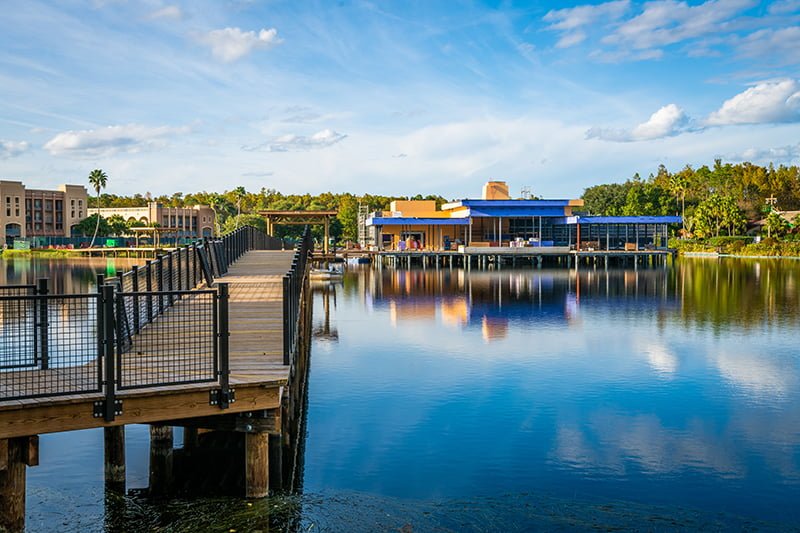 We assume this could be done well before July 2019, so it’s really just a matter of whether Walt Disney World management wants to open everything at the same time or not. 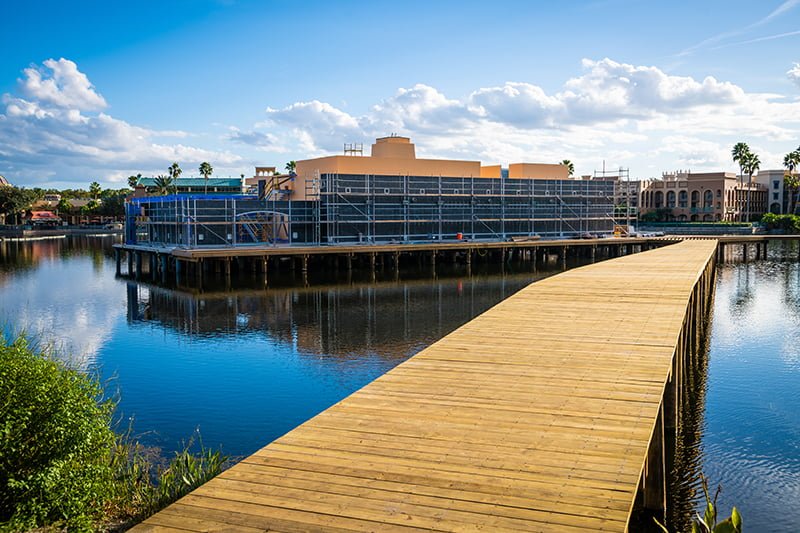 Same restaurant, but from the backside.

I actually like the relatively minimalist look of this restaurant’s design. I don’t purport to be an expert on Spanish architecture so I don’t know how it fits the resort, but it passes my basic smell test. 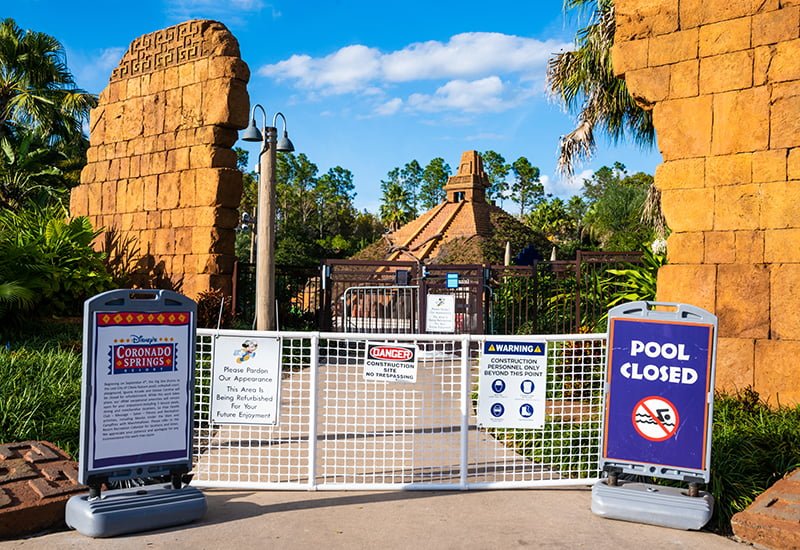 Moving over to the Dig Site, where the refurbishment project races towards its December 12, 2018 conclusion.

This is a refurbishment of the entire the Dig Site, which includes the volleyball court, playground, Iguana Arcade, Siestas Cantina, and the Lost City of Cibola feature pool, which is also known as the Mayan Ruins Pool. 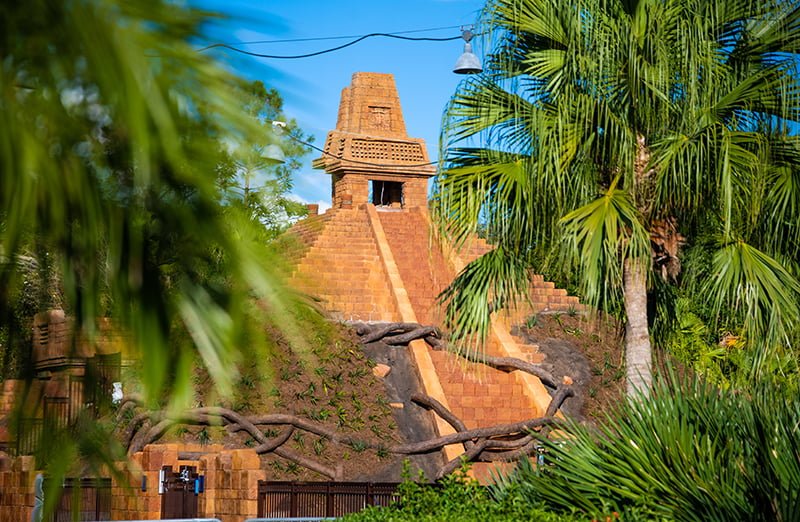 Overgrown vegetation on the Mayan pyramid temple has been removed, with seedlings planted in its place.

It’s tough to tell what else has been done, but the pool is still drained. 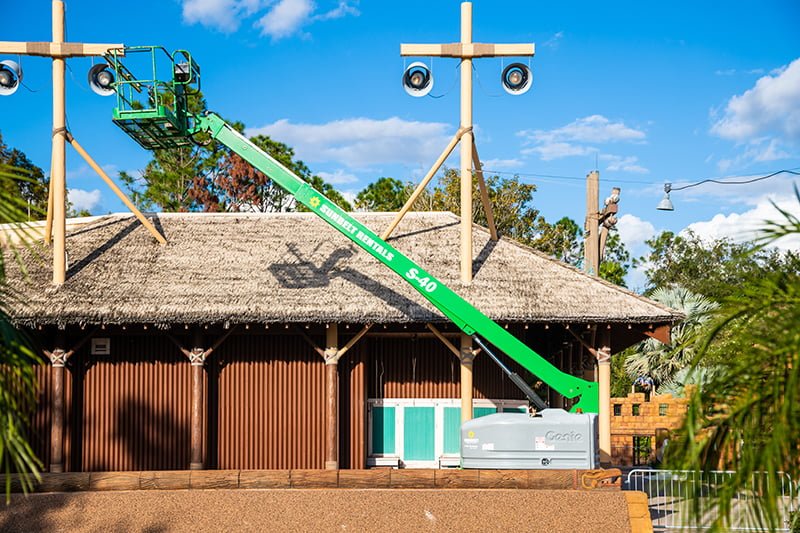 Other work has been done over by the bar and volleyball court.

Again, it’s difficult to ascertain what has happened and what still needs to be done, as thick vegetation secludes the Dig Site from the main walkway at Coronado Springs, and I didn’t want to climb on anything for these photos. (Sorry?) 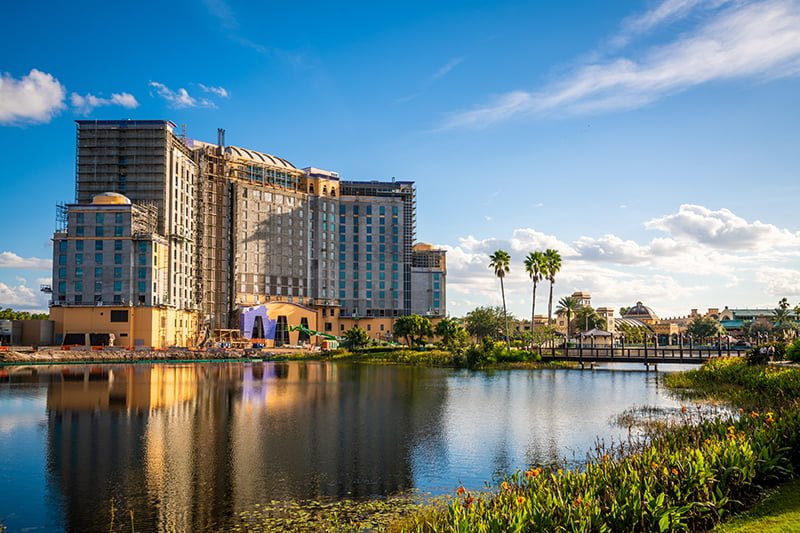 A look back at Gran Destino Tower from the walkway around the Cabanas.

Despite it being a busy holiday weekend, almost no one was out and about at Coronado. 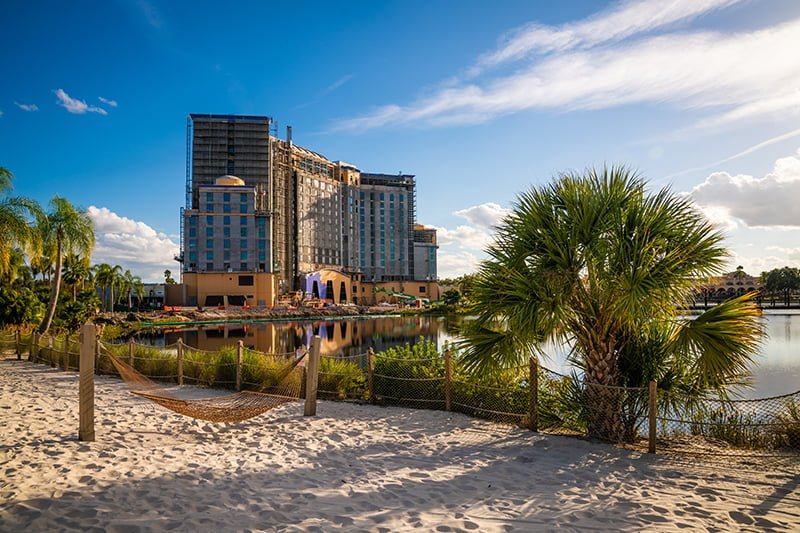 Gran Destino Tower seems easier to accept if you think of it as the ‘main’ building of the resort (which is what it will be with the lobby, check-in, etc.), rather than just an ancillary tower aimed at convention guests.

I dunno, maybe I’m just finally starting to come to terms with the expansion and grasping at straws to justify it to myself. 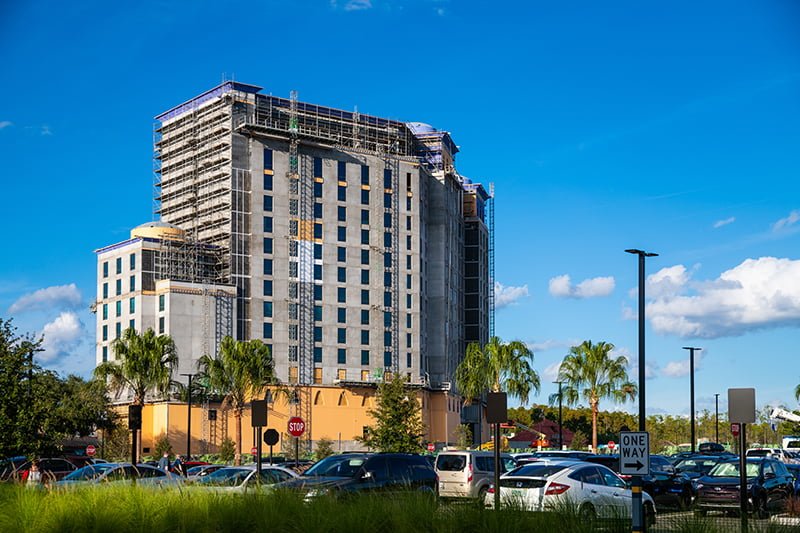 Viewed from outside the resort’s convention center, which is currently serving as the bus stop. 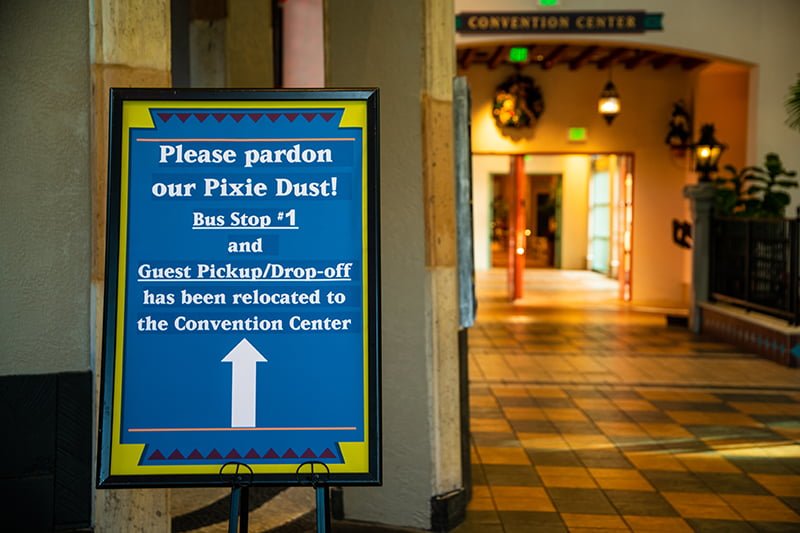 No conventions happening over the holiday weekend, which could explain why Coronado Springs felt so quiet. 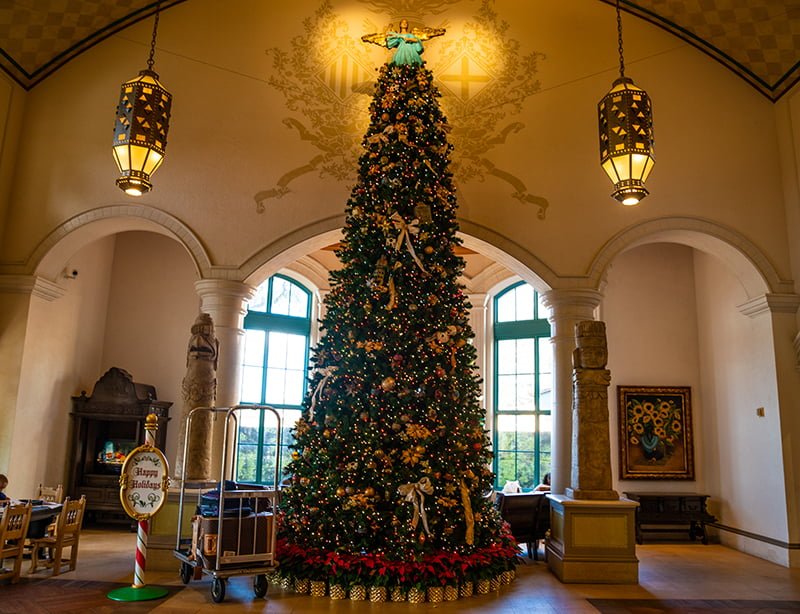 On the other hand, presumably Coronado Springs will have an entirely new (icon!) tree next year, so maybe we should just wait and focus on the Deluxes.

That wraps it up for this Coronado Springs Resort update. If you’re thinking about doing a stay here in early 2019, we see no reason to avoid Coronado Springs. Gran Destino will be mostly interior work at that point, so noise shouldn’t be too much of an issue. With that said, we’d instead recommend Caribbean Beach Resort with its newly-completed (and excellent) amenities; it’s a great pick right now, before the Skyliner goes live and room rates inevitably increase.

What do you think of Gran Destino Tower? Will you book a stay here in or after July 2019? Thoughts on Walt Disney World moving away from the ‘sprawling’ resort layout? Any questions we can help you answer? Hearing feedback about your experiences is both interesting to us and helpful to other readers, so please share your thoughts below in the comments!