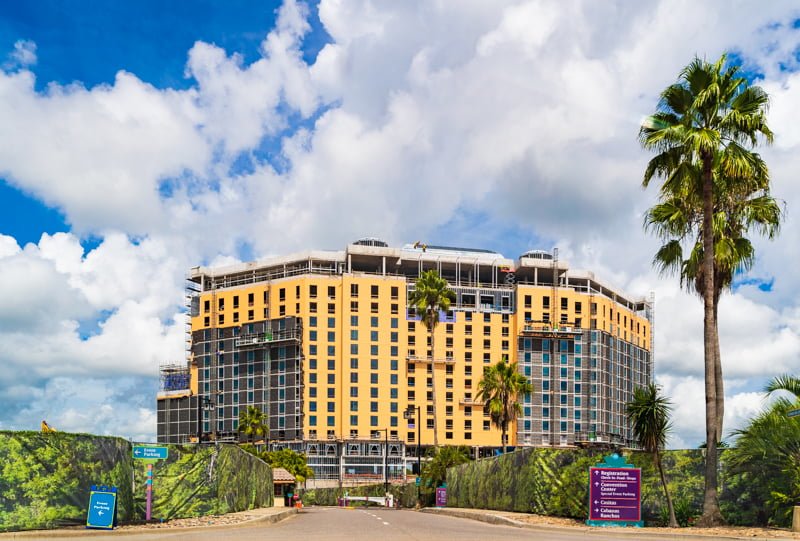 We’re back at Coronado Springs to check-in on construction progress of the 15-story hotel tower, over-the-water bar & grill, and other “improvement” projects as the hotel aims to enhance its offerings to appeal more to Walt Disney World’s business and convention guest clientele.

To be honest, it’s a pretty mundane update. Aside from lunch at Pepper Market and some random atmospheric photos I took while walking around, this update is very similar to our Coronado Springs Summer 2018 Construction Update, just with photos that show 2 months of additional progress.

As such, we’re going to keep most of the commentary here brief, assuming you’ve already read that update and are familiar with the nature of the construction/refurbishments/enhancements. If you have not read that and are planning a stay at Coronado Springs Resort between now and early 2019, you might want to, as we also speculate on the Dig Site refurbishment (which includes the Lost City of Cibola feature pool), and whether it’ll conclude by its scheduled completion date.

This refurbishment of the Dig Site seems like as good of a place as any to begin. This project started last week and is scheduled to conclude December 12, 2018. This is a refurbishment of the entire the Dig Site, which includes the volleyball court, playground, Iguana Arcade, Siestas Cantina, and the Lost City of Cibola feature pool, which is also known as the Mayan Ruins Pool.

We were at the Dig Site before it closed, and the area was shockingly quiet. This area is normally packed when I do these walk-throughs, but there were only a dozen or so people in the entire area. 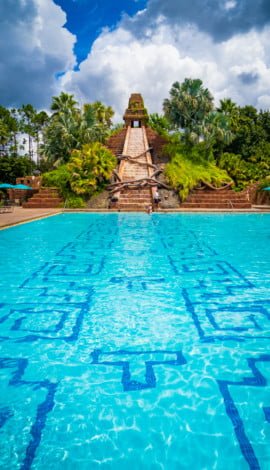 It was so uncrowded that I felt comfortable-enough to take pool photos, which is a rarity at Walt Disney World. (Few things I do are as awkward as a fully-clothed adult man taking pics of swimming pools, so usually I don’t do it unless the pools are closed late at night or early in the morning.)

I’m a huge fan of the Lost City of Cibola pool, and I really hope there aren’t plans to change its theme or character. With “only” a 3-month refurbishment, there’s not time to do anything drastic, so that’s at least slightly reassuring. 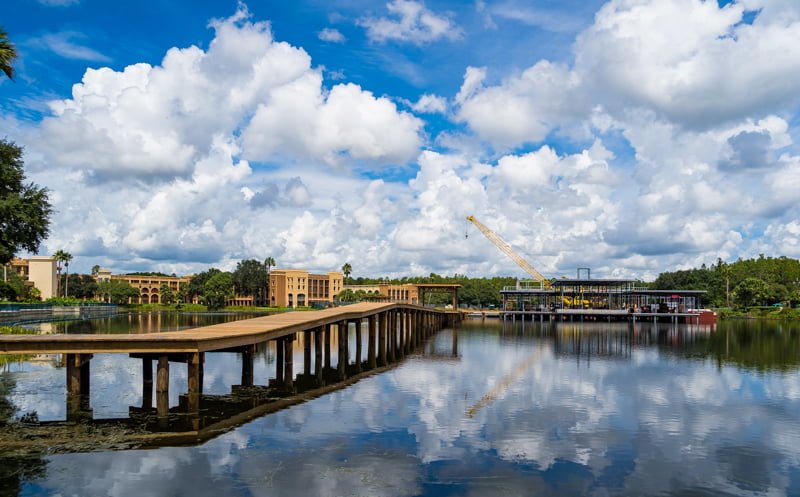 This is one of three large projects happening right now at Coronado Springs Resort. The second enhancement project is the unnamed over-the-water bar and grill being built in the middle of Lago Dorado. This has really come along nicely since our last trip to the resort in July, and you can see the frame of the building.

While it’s too early to say when this will be finished, it’s brisk pace is reassuring. Moreover, the concept art shows a relatively minimalist design, so it shouldn’t take an extended period of time to construct this new restaurant at Coronado Springs. If we had to guess, we’d say it’ll be ready by Spring 2019.

Here are more photos of the new over-the-water bar and grill at Coronado Springs Resort from different angles around Lago Dorado: 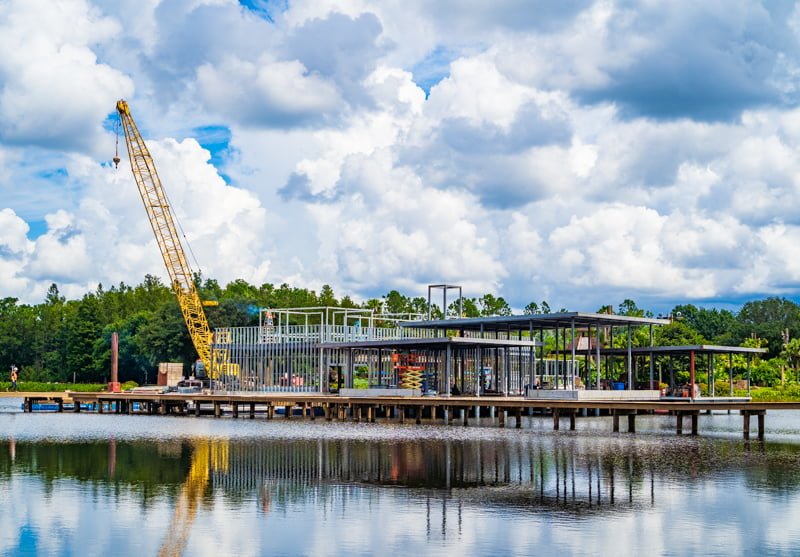 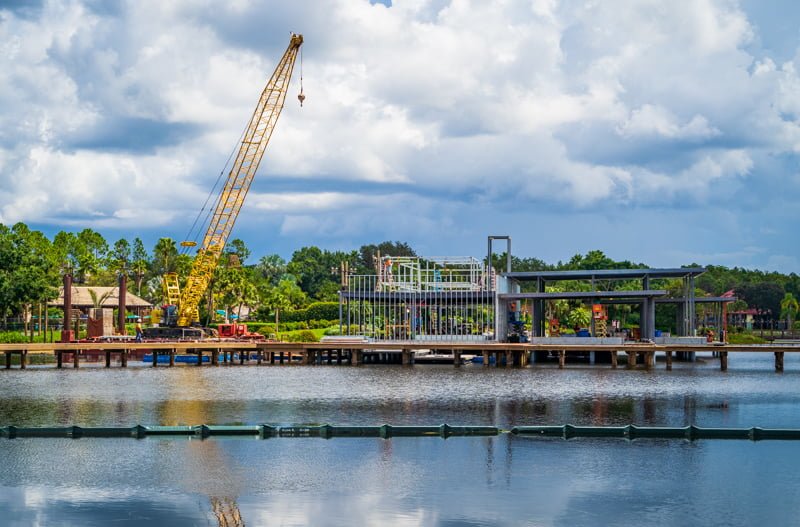 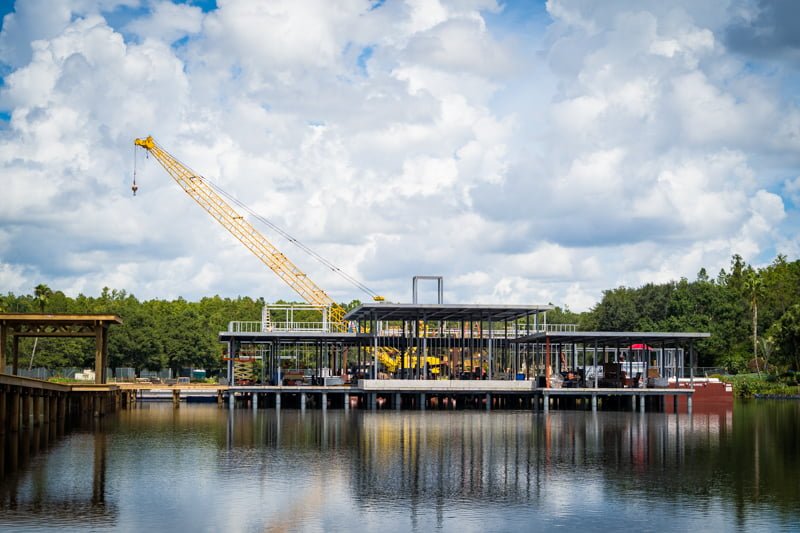 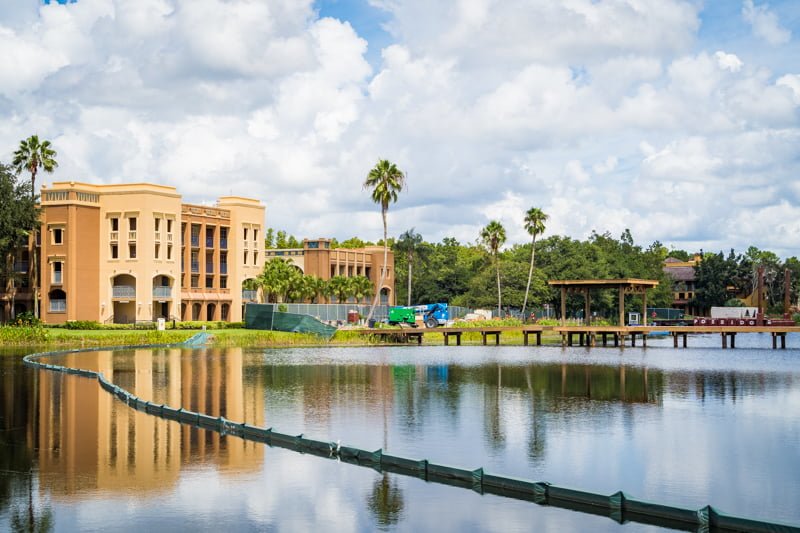 The last photo isn’t so much the bar and grill itself as the bridge connecting some of the more remote Casitas buildings to the restaurant. This bar and grill has a relatively modest footprint and height, one important thing to note is that this construction is literally in the middle of Lago Dorado, which is itself the center of Coronado Springs Resort.

This work is visible and audible from almost every section of the resort (albeit not from every individual building). Having one of the more remote rooms at Coronado Springs without a water view might actually be advantageous for the next few months. 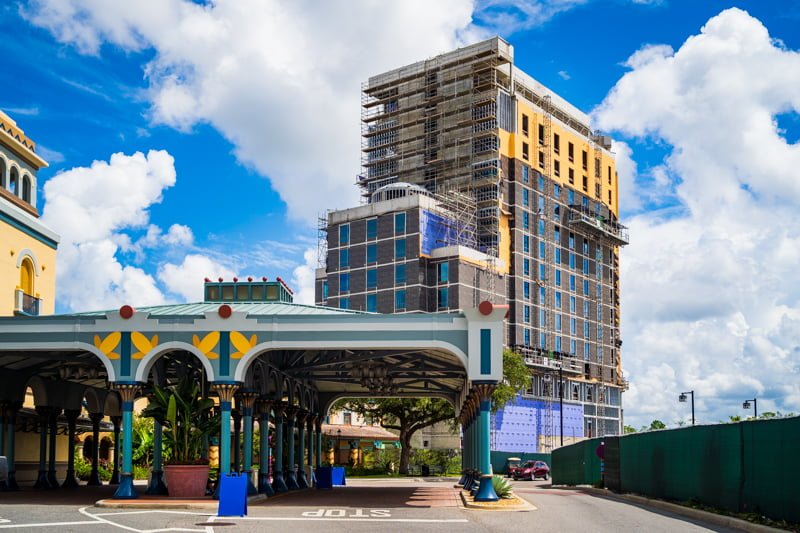 The final component of the Coronado Springs Resort project is the 15-story tower–the heart of the expansion–that’s being added to cater to convention and business guests. Given that this is going to be a direct source of revenue, Walt Disney World is wasting no time in getting this tower built.

Here are more photos of the tower from around Coronado Springs Resort: 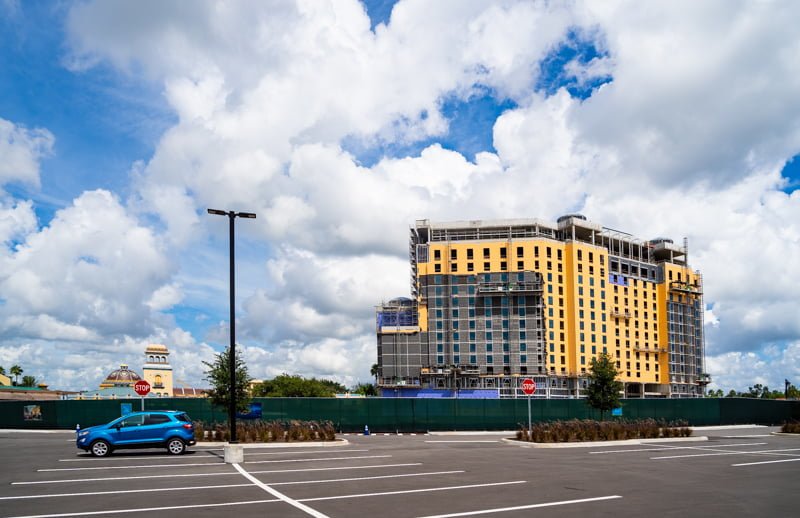 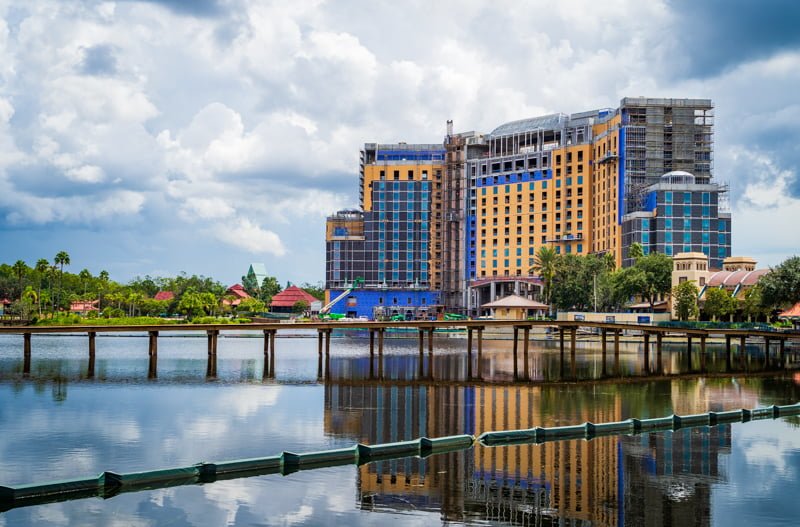 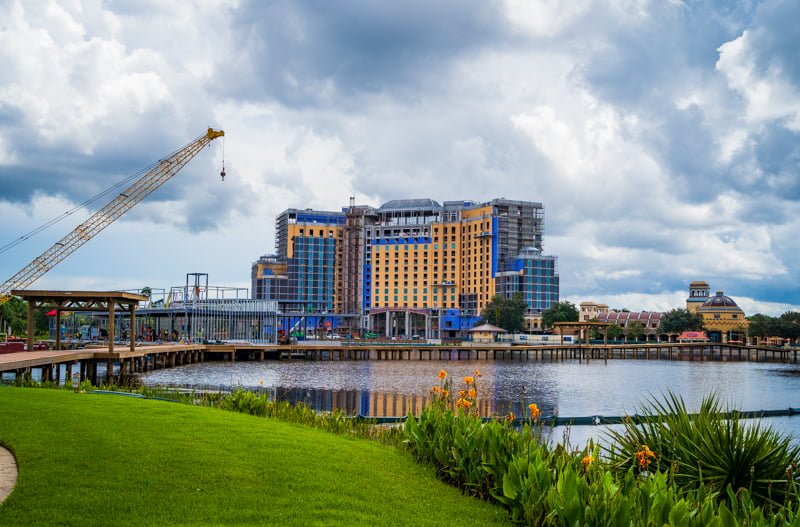 As compared to our last visit, more of the tower’s exterior is enclosed and there’s interior work underway. A ton of work remains to be done prior to the tower’s scheduled Summer 2019 grand opening, but there are no signs of any delay.

Within the next couple of months, we’d expect most of the construction work on the tower to shift to the interior of the enclosed building. That should make a big difference on the noise-level of the project. 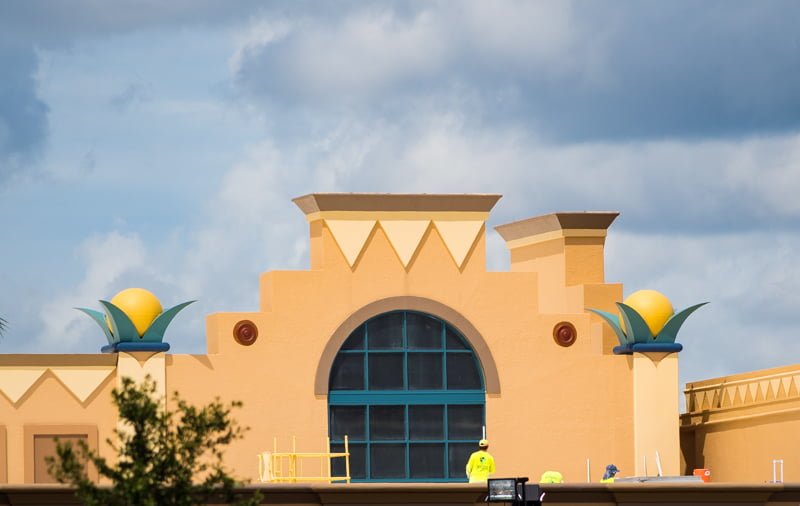 Another thing to note is that as these major projects are pretty much confined to their respective footprints, other work continues at Coronado Springs to give the resort a fresh coat of paint–both literally and figuratively.

Expect these smaller scale refurbishments to continue throughout the next year, as the hotel transforms, to the greatest extent possible, into something more elegant and less extravagant. That’s a charitable way of putting it–basically, the hotel wants to appeal more to convention guests, meaning some of the more ‘vibrant’ thematic elements are being subdued. 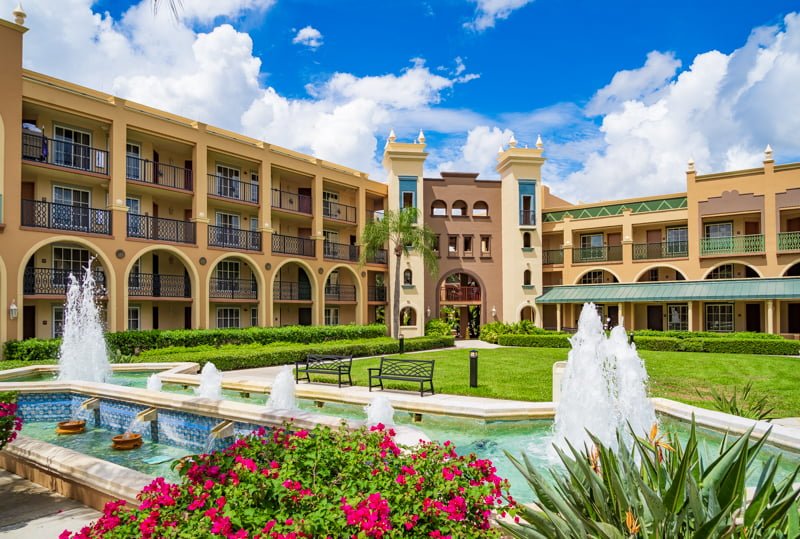 One of the things these construction updates are bad about is worry-mongering and that’s really not our intention. Since this is a report on current construction, that’s our obvious focus with these photos. Unfortunately, this fails to highlight just how much of the resort is “business as usual.” 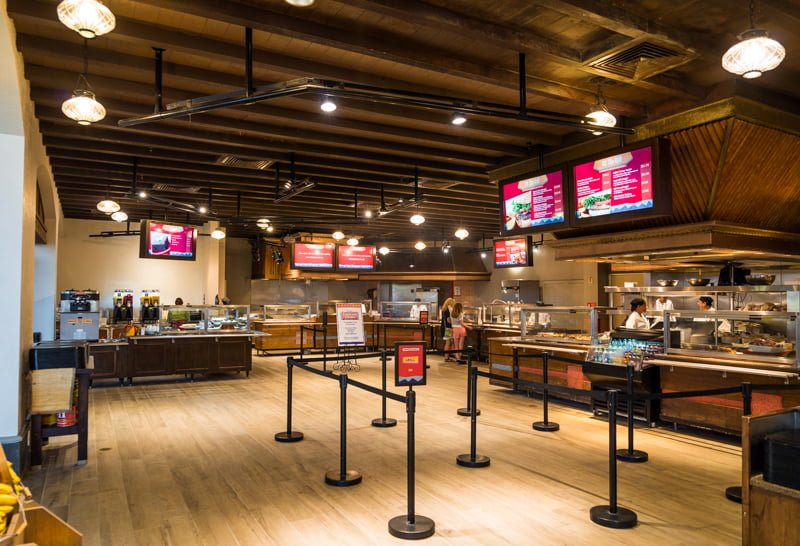 The other good news is that Coronado Springs’ lobby and its restaurants are all fully open and are unaffected by the construction. We stopped into Pepper Market for a meal during our visit to Coronado Springs, and found the food court to be dead at lunchtime. Granted, it was the ‘height’ of off-season, but it was a pleasant experience.

Pepper Market has already seen some minor aesthetic changes in the last couple of years, and we’d anticipate more of a refresh of this food court and at other Coronado Springs restaurants in the near future. During the off-season, Coronado Springs would have no issue doing phased closures of these restaurants to modernize them ahead of the tower’s debut. 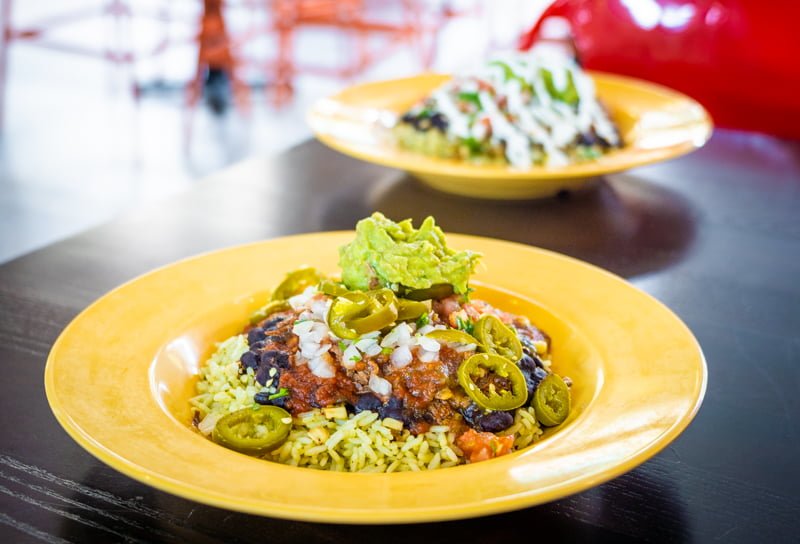 During this visit to Pepper Market, we each had different rice bowls, and they were fantastic. As we’ve noted in the past, we are huge fans of Pepper Market. Reader reactions to that sentiment have always been mixed, which continues to baffle us. The rice bowls are great, the ribs are great, the Aztec Burger is great.

What are people ordering at Pepper Market that’s so bad? The pizzas? (They don’t look too promising.) Generic burgers? Pasta? We are genuinely curious, as we hear a lot of offhand remarks that Pepper Market is terrible, but our personal experience there has been the exact opposite.

UPDATE: Within the last few days, Walt Disney World silently changed the name of Pepper Market to “El Mercado De Coronado.” Presently, the menu is the same as before, but we wouldn’t be surprised if a menu change occurs, as well. One way or the other, we’d expect an update on the Disney Parks Blog sometime this week.

The bad news is that anyone staying at Coronado Springs between now and mid-2019 is going to have their stay impacted by construction to some degree. Whether that be via the closure of the entire Dig Site pool area, the noise coming from the tower and restaurant, or the views from walkways around Lago Dorado.

The degree to which this impacts your Walt Disney World vacation will really be a matter of your room’s location at the resort, what amenities you use at Coronado, and how much time you spend at the resort. Personally, I would not stay at Coronado Springs until sometime in Spring 2019, but that’s just me. I’m hesitant to book until the restaurant construction is largely finished and until we know Dig Site will actually reopen as scheduled, without delay. Your mileage may vary if you’re a big fan of Coronado, but if you’re a first-timer who has never been to Walt Disney World, or just someone who is not keen on staying at a hotel that’s an active construction zone, look elsewhere.

Have you stayed at Disney’s Coronado Springs Resort since the construction started? What did you think of the experience? Would you recommend Coronado during construction to others? Planning on staying here during the Dig Site work or in early 2019? Any questions we can help you answer? Hearing feedback about your experiences is both interesting to us and helpful to other readers, so please share your thoughts below in the comments!