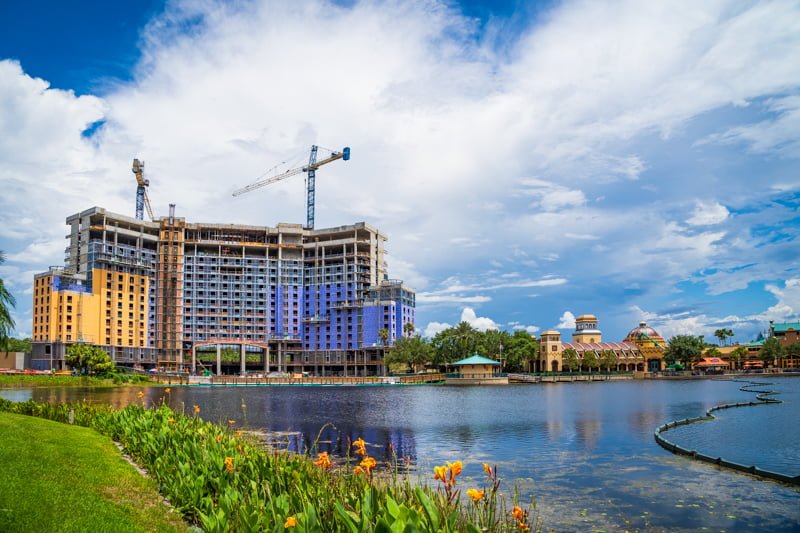 It’s been a few months since we’ve checked out refurbishments and construction progress on the 15-story hotel tower at Coronado Springs Resort. The tower plus the resort-wide enhancements is one of Walt Disney World’s biggest construction projects right now, and if you don’t believe that, just check out all of the cranes and equipment in this post!

Here, we’ll take a photo/video tour of Coronado Springs, provide insight into the current and projected progress on the resort, and our take as to whether you should stay here during your Walt Disney World vacation between now and 2019. (Note that I’m not going to rehash what we’ve covered previously, so if you want to see the concept video fly-through, check out our last Coronado Update.) While the Coronado Springs project is a colossal undertaking, it’s not a resort re-imagining, so the degree to which your stay will be impacted depends.

If you want a wholesale resort re-imagining (even if Walt Disney World doesn’t want to call it that), look no further than our Caribbean Beach Resort Summer 2018 Construction Update. While there are several similarities between the two projects–and the goal of both is to elevate the status of the respective resorts–the work at Coronado Springs is slightly less intrusive. However, that could very well change by this fall…

There are two things to consider if you’re planning a stay at Coronado Springs this fall or winter. The big deal that caught a lot of guests by surprise was the recent announcement that the Dig Site recreation area would be refurbished from September 4 through December 12, 2018.

This project will include everything around the Dig Site, which is a relatively large area on the edge of Lago Dorado. This area includes the volleyball court, playground, Iguana Arcade, and Siestas Cantina. Most importantly, this is where the Lost City of Cibola feature pool (the “Mayan Ruins Pool”) is located. All of it will be closed for refurbishment. 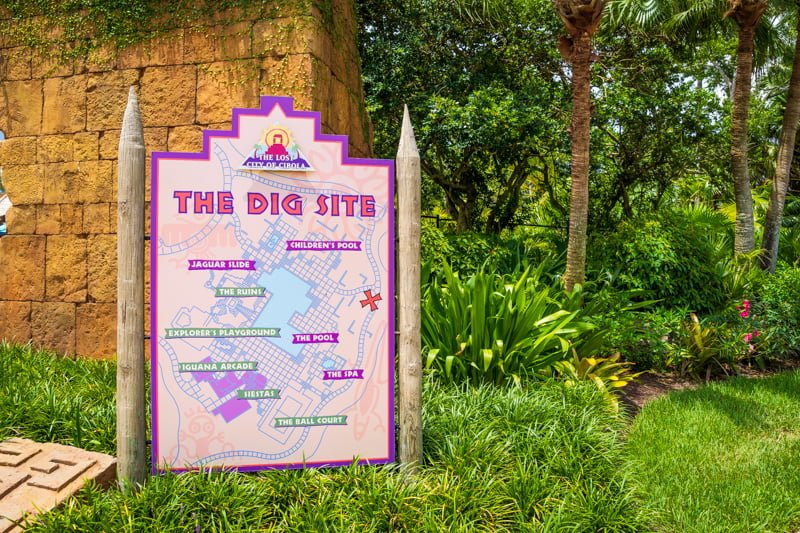 While Walt Disney World is currently listing the completion date of this project as December 12, we are incredulous. First of all, almost every hotel project in the last 18 months has fallen behind schedule. With so many simultaneous projects, resources are spread thin.

Second, this is a large recreation area, and we strongly suspect this is not garden variety maintenance, but rather, an enhancement project to elevate the resort’s amenities ahead of the tower being completed. Finally, it seems unlikely that there will be any urgency to get a pool reopened in winter, when few guests will care. 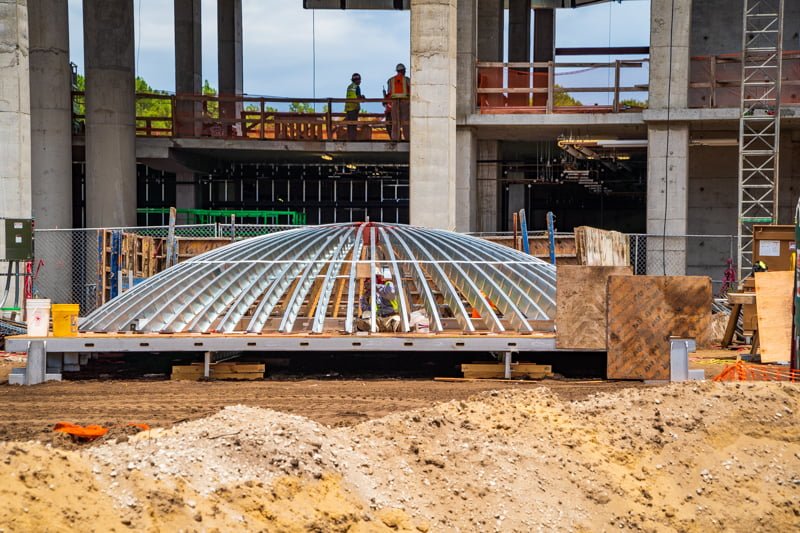 Suffice to say, those of you with Christmas week or New Year’s Eve trips booked for Coronado shouldn’t think you’re “safe” because this project will finish well before you arrive. If you’re booked for Coronado over those travel dates and a pool is essential to you, consider erring on the side of caution and changing resorts now before all other alternatives are fully booked.

We wouldn’t be shocked if getting the Dig Site work done by March is the internal target. Of course, our assumptions could be totally wrong–this could be routine work that’ll finish exactly as projected. 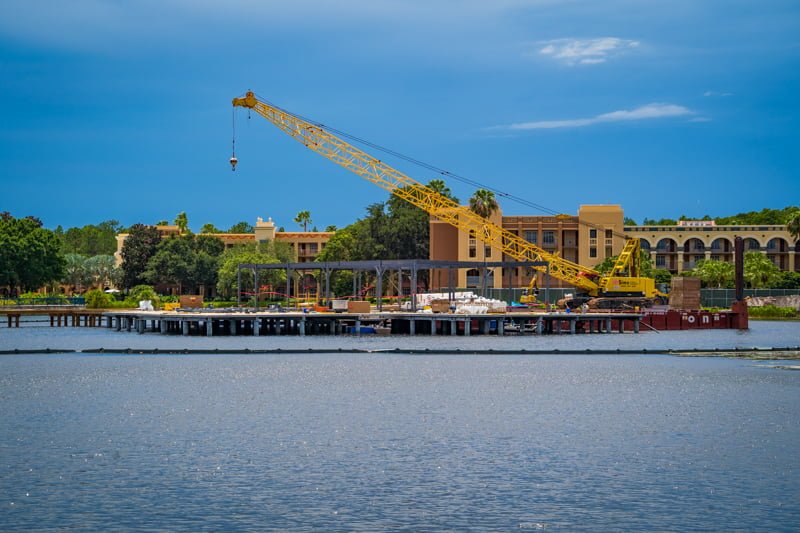 The other component of the Coronado Springs Resort enhancement project that will have a bigger impact right now and through early 2019 is the unnamed over-the-water bar and grill being built in the middle of Lago Dorado.

This dining spot’s foundation has been set and construction is now vertical. If the concept art is accurate, the design of this bar and grill is fairly minimalist and shouldn’t take an extended period of time to build. However, that doesn’t mean work will be done within a few months. 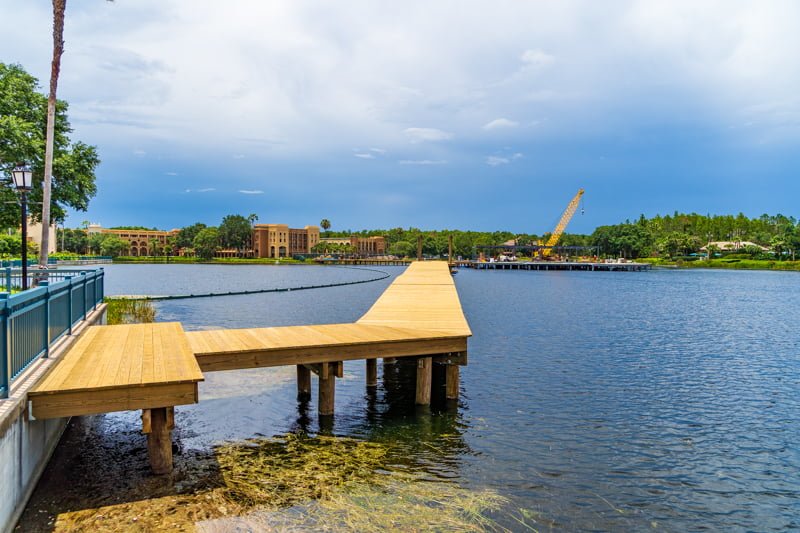 While this bar and grill is obviously going to be much smaller than the 15-story tower, the difference between the two is that the restaurant is in the middle of the lake, which is essentially the center of Coronado Springs.

During our visit to Coronado Springs, this construction was noticeable from everywhere that is along Lago Dorado…which is a lot of the resort. 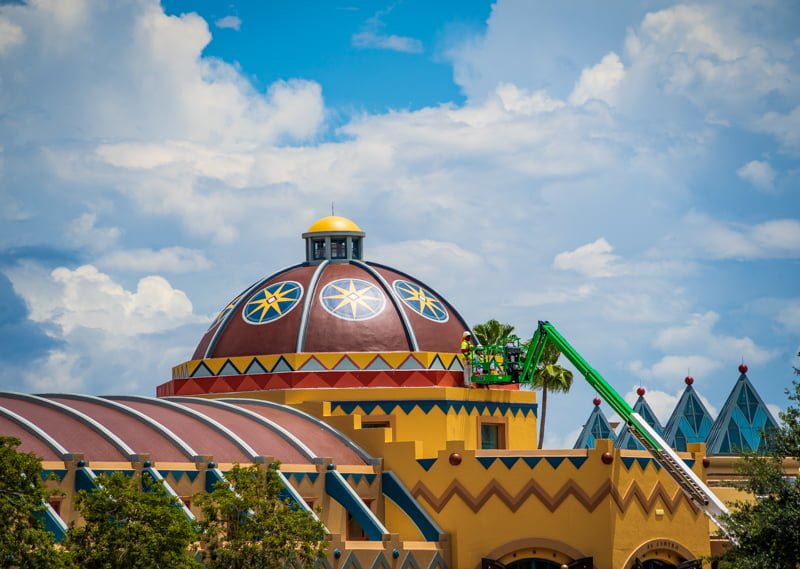 As one of the overarching goals of this project is to elevate the status of Coronado Springs, there are a variety of smaller projects and rolling refurbishments taking place throughout the resort. For example, the exterior of the lobby rotunda was being repainted on the day we visited. Other buildings around the lobby likewise were receiving a new color scheme.

We doubt these projects will slow down at any point in the near future, as the thinking seems to be that they might as well do as much work simultaneously with the blanket construction warning given to guests. In other words, unannounced work like this should be expected if you’re staying at Coronado Springs anytime between now and next summer. What will happen when is totally unpredictable. 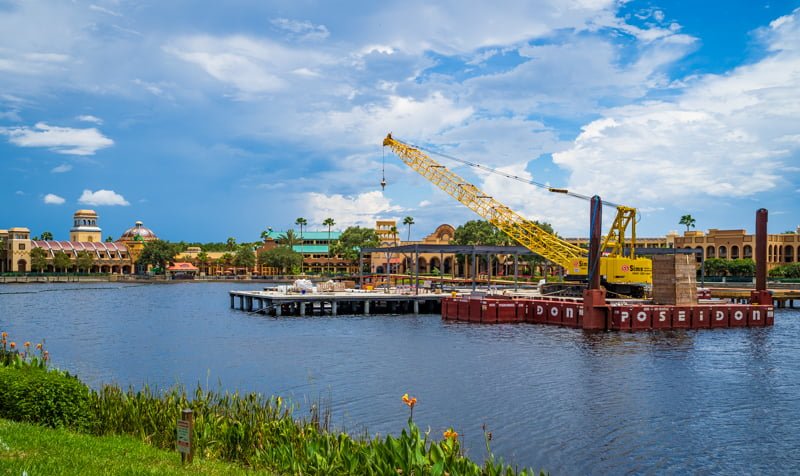 Walking around Coronado Springs while taking photos for this update, there were fewer sections of the resort that felt peaceful as compared to previous trips to Coronado for these updates.

We stayed at Coronado during construction last year and it didn’t bother us at all. I highly doubt that would be the case now. 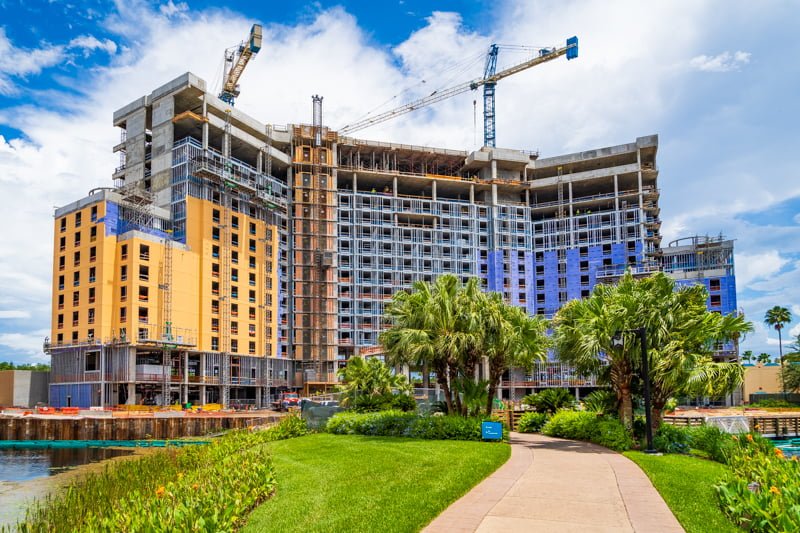 As for the 15-story tower that’s being added to cater to convention and business guests, it’s coming along quickly. Construction on the tower is visible from all around the resort, so there’s that, but it’s not audible from everywhere. In fact, during our last stay at Coronado, we never even noticed it until we walked over by that side of the resort.

Part of the tower is starting to be enclosed and there’s interior work already beginning. There’s still a ton of work to be done prior to it opening next summer, but by this fall, we’d expect much of this work to shift to the interior of the enclosed building. 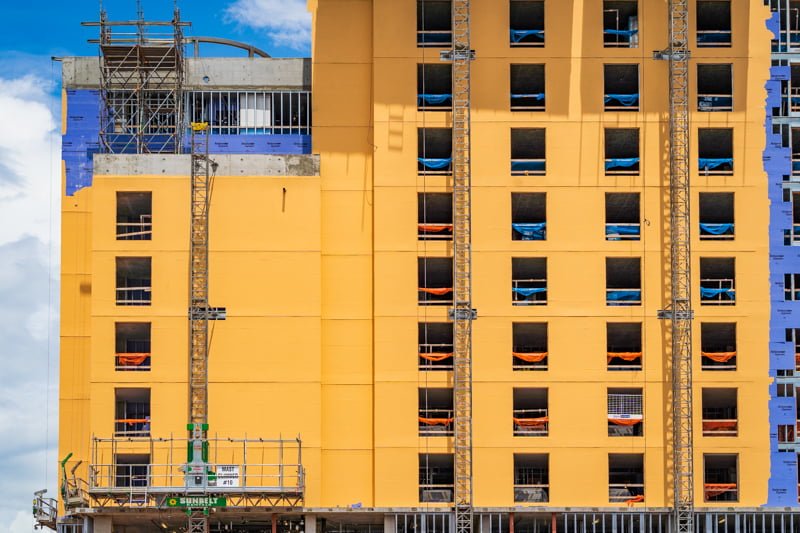 That shift should make a difference in terms of the construction vibe at Coronado Springs Resort, and at least partially offset the increase in work being done elsewhere.

The good news for those of you planning to stay at Coronado Springs in mid 2019 is that your construction impact should be minimal. 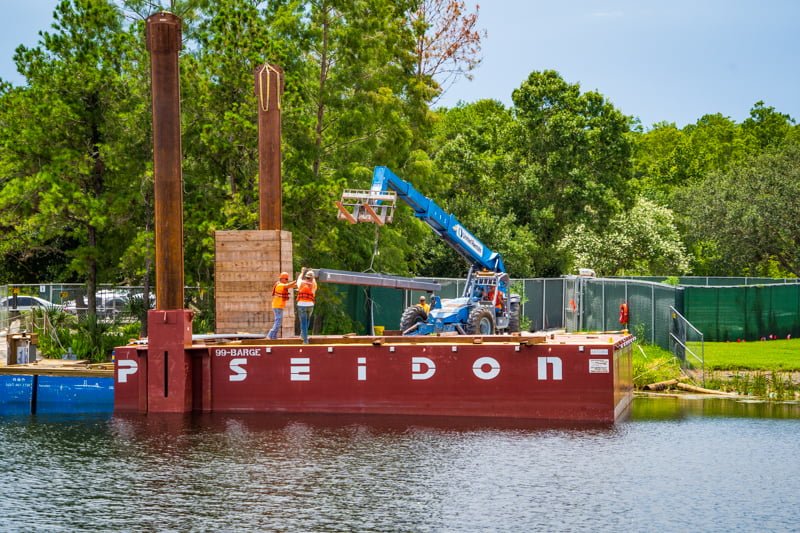 Elsewhere around Coronado Springs, there’s this over between the Ranchos and Casitas. I have zero idea what’s going on here.

Perhaps it’s a floating Food & Wine Festival kiosk, for Disney to capitalize on conventioneers who don’t want to leave the resort? (Anyone know what this actually is?) 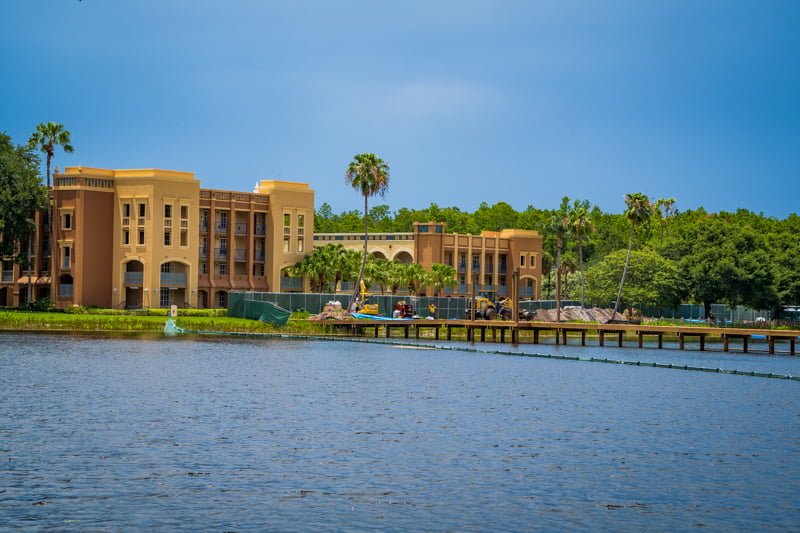 The bad news is that anyone staying at Coronado between now and mid-2019 is much more likely to have their stay impacted by construction. While the main lobby and its several restaurants remain open at Coronado, which is a big advantage over Caribbean Beach, we’d say that the construction work is getting close to being as intrusive at Coronado as it is at Caribbean Beach (although both are pretty bad, so it’s a ‘pick your poison’ type of scenario). That’ll only get worse once the entire Dig Site pool area goes down for refurbishment.

As with Caribbean Beach, we know some of you are Coronado Springs diehards or have special circumstances that allow you to justify staying here, and that’s fine. Personally, I would not book a stay at Coronado Springs between now and roughly May 2019. With both of the Port Orleans Resorts looking great right now and offering lovely grounds, it’s impossible for us to justify paying virtually the same rates for two resorts that are essentially construction zones. Again, your mileage may vary if you’re a big fan of Coronado, but if you’re a first-timer who has never been to Walt Disney World, or just someone who is not keen on staying at a hotel that’s an active construction zone, stay elsewhere.

Have you stayed at Disney’s Coronado Springs Resort since the construction started? What did you think of the experience? Would you recommend Coronado during construction to others? Planning on staying here during the Dig Site work or in early 2019? Any questions we can help you answer? Hearing feedback about your experiences is both interesting to us and helpful to other readers, so please share your thoughts below in the comments!