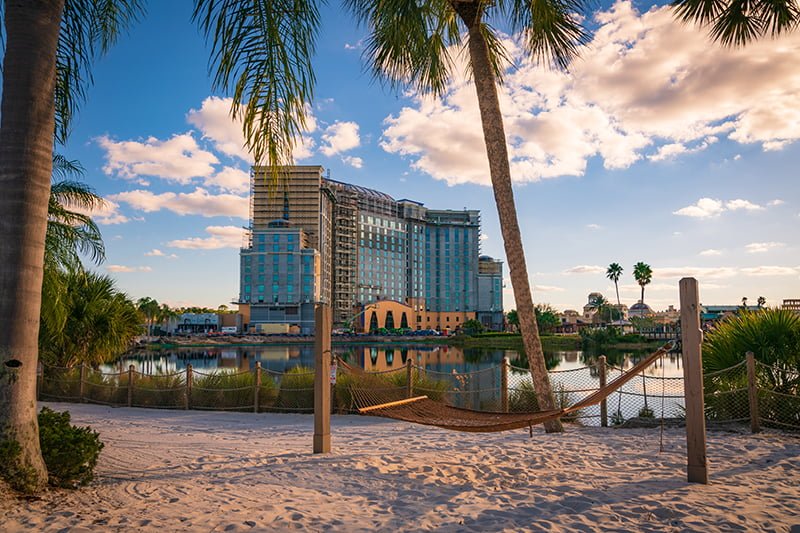 Our first Walt Disney World construction update of the year takes us to Coronado Springs Resort. Work progresses on Gran Destino tower and over-the-water bar & grill, and is now completed on the Dig Site. In this update, we’ll cover the latest details and also take a stroll around Coronado Springs to see how things are looking now.

Since the update, a few things have happened. First, Disney Meetings announced that the new lakeside lounge will be named “Villa del Lago,” an oasis for light fare and cold drinks with capacity for 60 guests plus additional event space. I guess we don’t have to refer to it as Coronado’s forthcoming over-the-water bar & grill anymore.

Second, Gran Destino is now available for booking for dates beginning July 9, 2019. There are eight different room categories in the Gran Destino Tower, some of which include Club Level access. I mean to grab a rate chart from Coronado’s front desk during this visit (assuming they even have one–many resorts never seem to have copies on hand), but I failed at my one job. Apologies.

Instead, you’ll have to settle for what I was able to glean from a few cursory searches. It looks like rack rates start in the neighborhood of $275/night for Gran Destino in the off-season, and settle into the mid-$300 range for most ‘regular season’ nights after that.

October, November, and December are all (unsurprisingly) more expensive. The first of those months is the heart of convention season, and the second two are not just the popular holiday seasons, but potentially range ranges when Star Wars: Galaxy’s Edge will be open. For nights during those months, rates in the upper $300 range are more common.

For the summer and early fall, the “Sun & Fun” room discount is applicable to Coronado Springs for up to 25% off Gran Destino, which puts its rooms below $200/night for some dates. I did a decent amount of searching, and this was the best I could find: 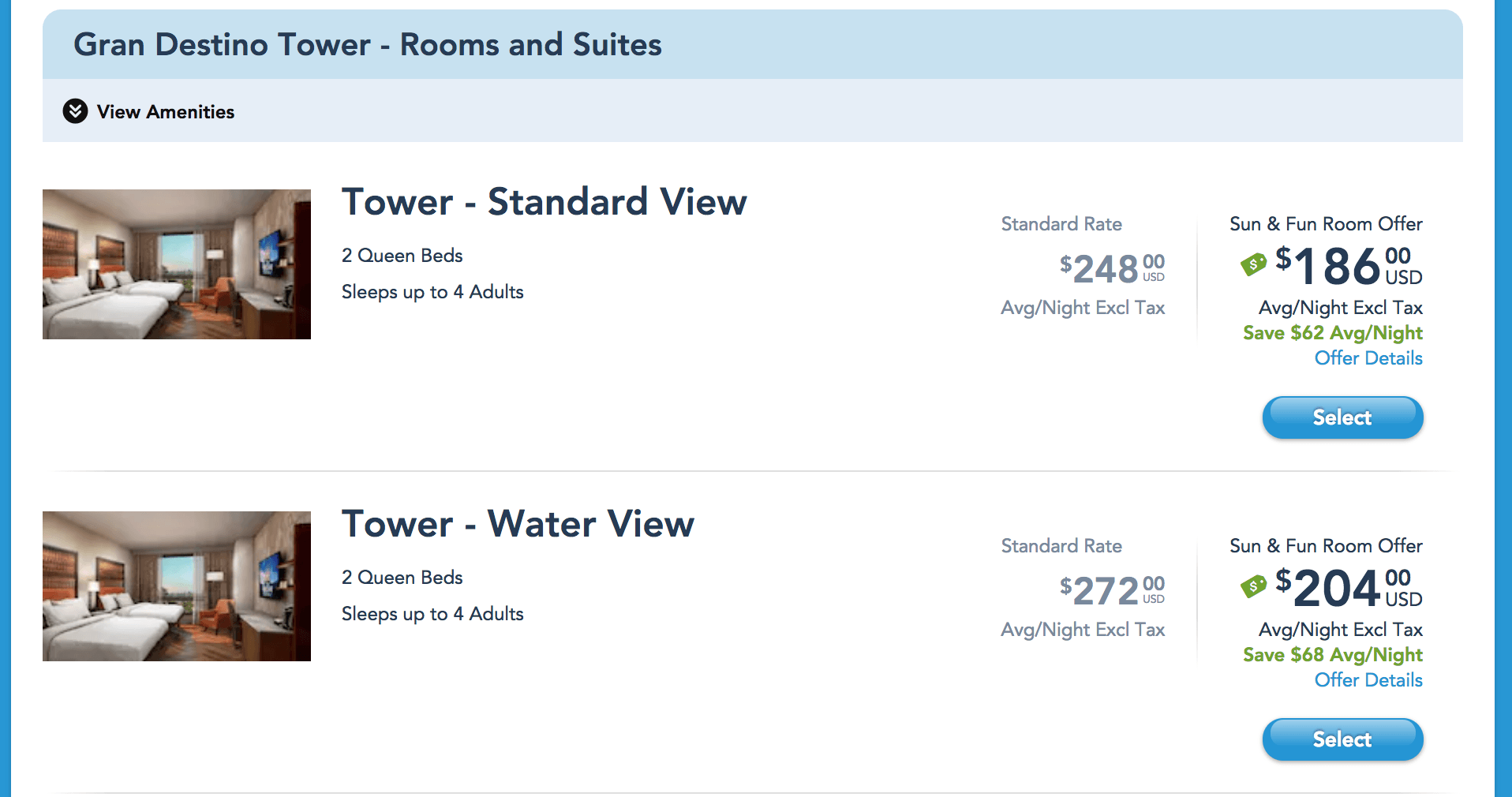 Our original plan was to wait until a really good deal became available for Gran Destino and then to just review it whenever, but opening night is “only” $191 right now, which is very tempting. Plus you never know, we might get something incredibly cool for being the first official guests, like free buttons.

Wow, we basically cannot afford not to do it with so much on the line. 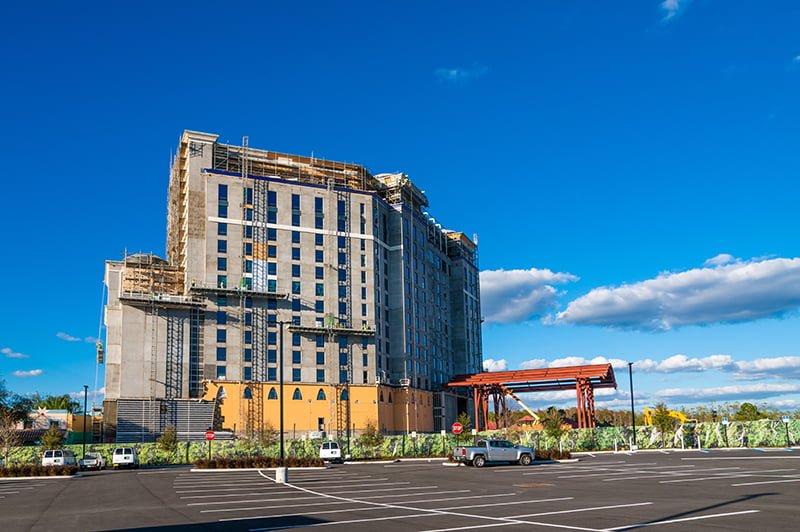 Moving on to the construction portion of the update, there’s honestly not a ton of visible progress on either Gran Destino.

Not much has changed since our last update in November (in fairness, that was posted at the end of the month, so it was basically 5-6 weeks ago), which we assume is because a lot of the work has moved inside the tower. 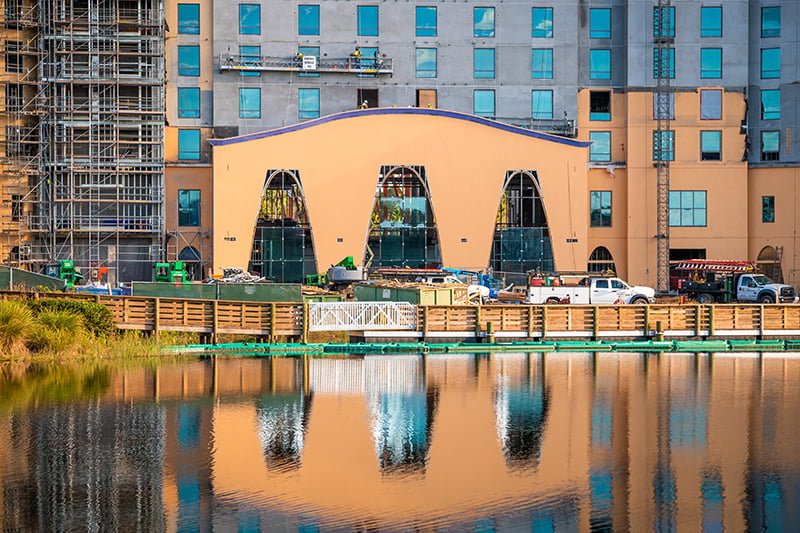 Glass panes are being installed for the giant floor to ceiling lobby windows.

It’s possibly a weird thing to care about, but I’m hopeful that this lobby will be nice. I’m not expecting the thematic greatness or even the grandiosity of Wilderness Lodge, but a striking open space–tall enough for an icon Christmas tree!–would be awesome. 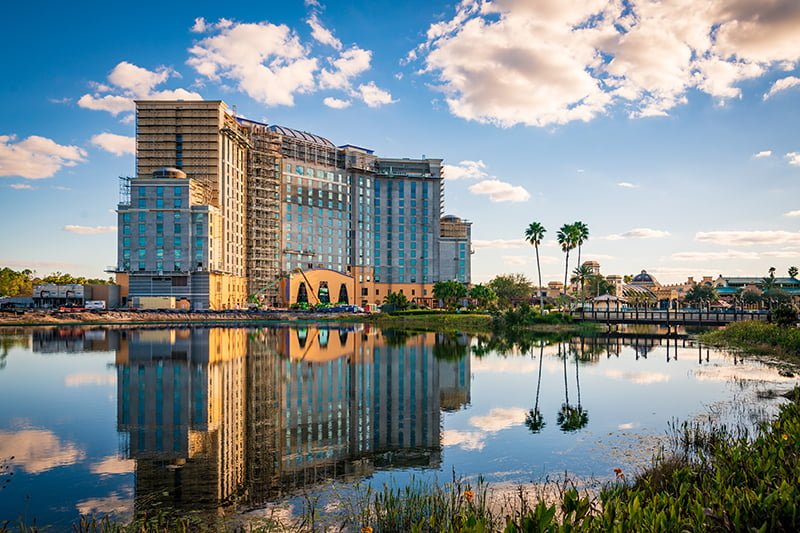 It should be noted that Gran Destino is still very much an active construction site, with a lot of exterior work still being done.

The cranes and a lot of heavy machinery are long gone, but there’s still a lot of movement. From a noise perspective, it doesn’t help that the sound carries pretty easily over Lago Dorado and the other bodies of water. 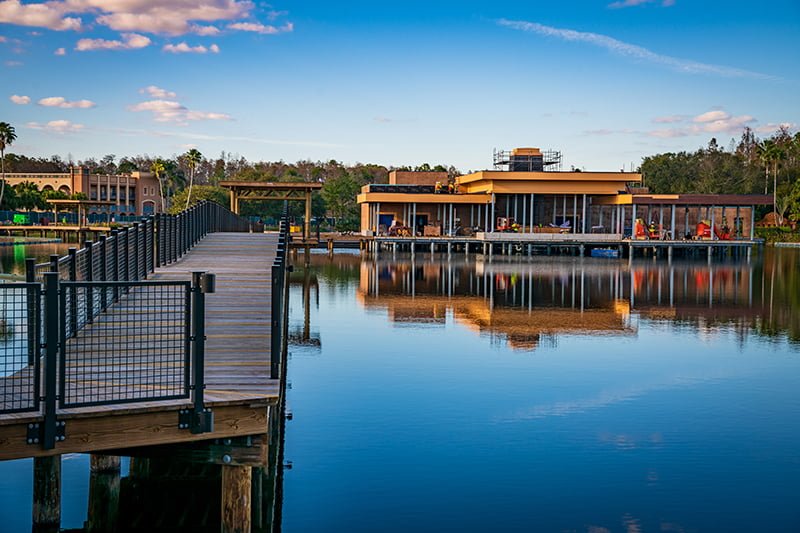 This means you can hear construction on both projects from any waterfront area–even on the far side of the resort.

However, once you move away from the water, sound is almost nonexistent. Right now, the safer bet on room selection is with a Courtyard or Parking Area room view, rather than Lake or Pool. 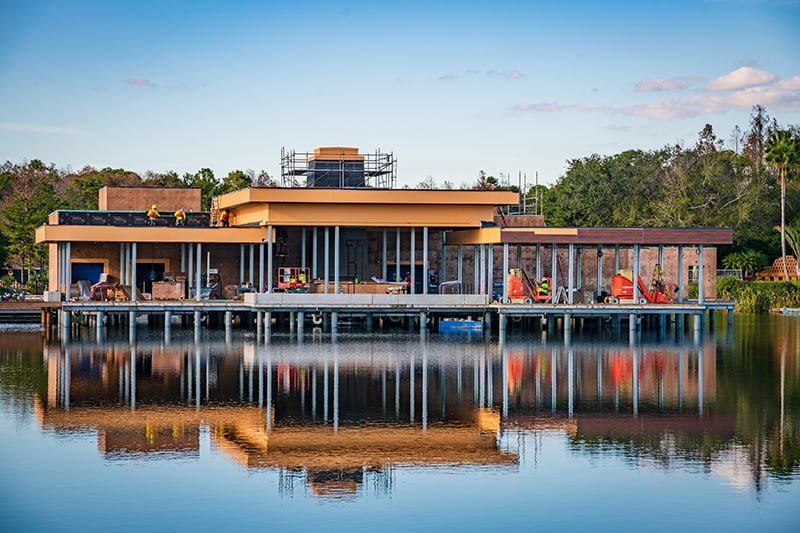 We assume this could be done before July 2019, so it’s really just a matter of whether Walt Disney World management wants to open everything at the same time or not. It does seem like the pace on this lounge has slowed a bit, but that could just be due to the holidays. 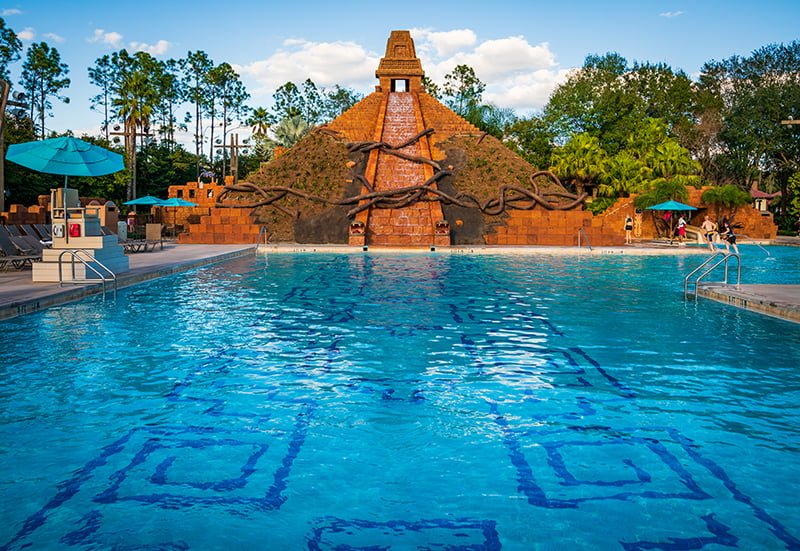 Moving over to the Dig Site, which has reopened following its ~3 month refurbishment.

This project refreshed the entire the Dig Site, which includes the volleyball court, playground, Iguana Arcade, Siestas Cantina, and the Lost City of Cibola feature pool, which is also known as the Mayan Ruins Pool. 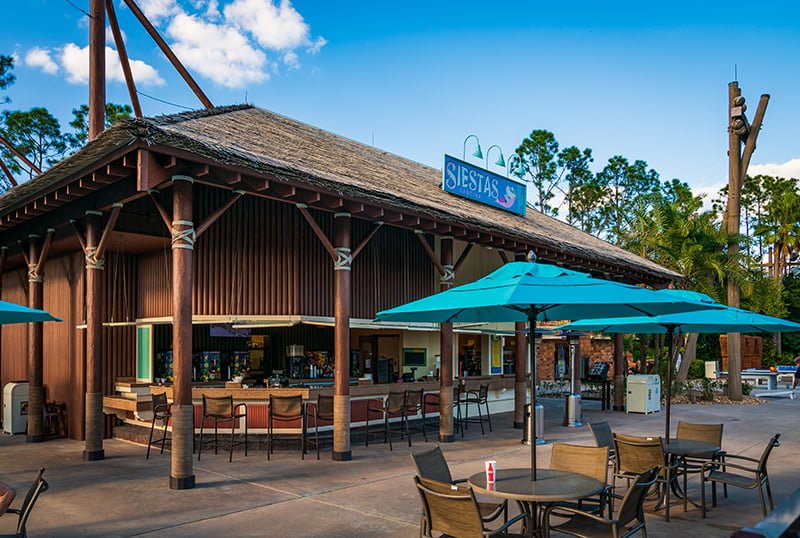 During our last few visits, we saw a large amount of visible work being done inside and outside the pool, volleyball court, bar, and seating area.

Unfortunately, for the life of me, I can’t figure out what substantive changes were made. There’s a slightly darker color scheme and some aesthetic changes to the Mayan Ruins, but I don’t notice anything else.

Part of that could be because I rushed through to get these photos, as it’s always awkward to be fully clothed taking photos of a pool that’s in use. In any case, it looks nice and fresh…just don’t expect any night and day differences.

That’s fine, because this was one of the Dig Site was one of the best pool complexes at Walt Disney World before, so a don’t fix what isn’t broken approach certainly made sense. 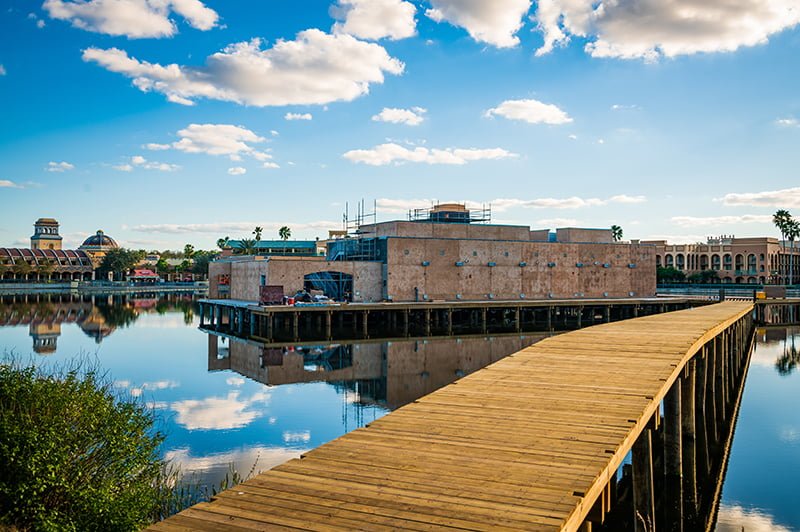 That wraps up this Coronado Springs Resort update. Hopefully at some point in the next couple months, the Gran Destino isn’t producing any noise, period, as it should be mostly interior work at that point.

With that said, we’d instead recommend Caribbean Beach Resort with its newly-completed and well-executed re-imagining for stays before July 2019. That resort is a great pick right now before the Skyliner goes live and room rates inevitably increase. After July, consider booking Coronado Springs; for some dates, tower pricing isn’t too bad if that’s your preferred style of accommodations.

What do you think of Gran Destino Tower? Will you book a stay here in or after July 2019? Thoughts on the tower’s pricing? Excited for Villa del Lago? Any questions we can help you answer? Hearing feedback about your experiences is both interesting to us and helpful to other readers, so please share your thoughts below in the comments!