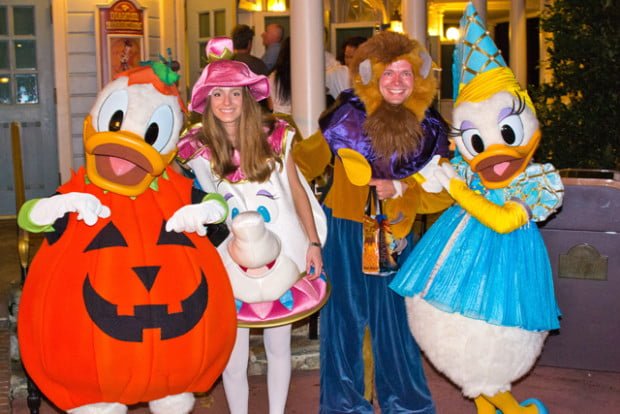 We are experts on Disney Halloween costumes. Wait, you’ve seen our past costumes? Okay, you know “expert” isn’t the right word, then. We’ve had some fun with our costumes and despite not being especially crafty, some people seem to like some of our costumes…for some reason (presumably the same reason anyone likes this blog: they are certifiably insane).

This year, we’ve been trying to come up with some cool costumes for both Mickey’s Not So Scary Halloween Party at Walt Disney World and Mickey’s Halloween Party at Disneyland (Disney’s “naming team” really worked overtime to distinguish the two parties!).

In the process, we’ve inadvertently stumbled upon other ideas and also some general “rules” that you might want to follow when putting together your own costumes. These range from relatively simple things like being mindful of the weather, to specific costume ideas you might use if you can’t think of anything else.

Here are our tips, costume ideas, and things not to do when it comes to Disney Halloween costumes… 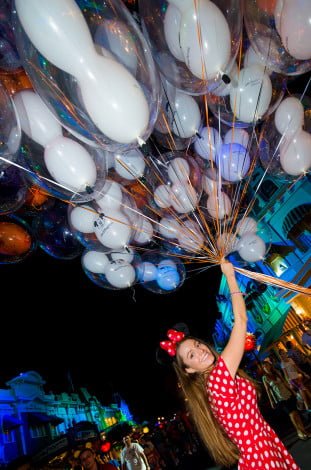 Disneybounding – Since Disneybounding really exploded and went mainstream, we’ve noticed some people doing it for Mickey’s Not So Scary Halloween Party. I am a huge fan of the creativity that goes into Disneybounding, but to me, it seems like a way to infuse a dash of Disney into a regular, everyday outfit.

I want to stress that this is just a suggestion–Sarah has Disneybounded to the Halloween Parties because it was an economical and practical (read: heat & humidity-friendly) way to wear something more than just ordinary clothes to Mickey’s Not So Scary Halloween Party. If you love Disneybounding or wouldn’t otherwise wear a more elaborate costume, by all means, Disneybound! 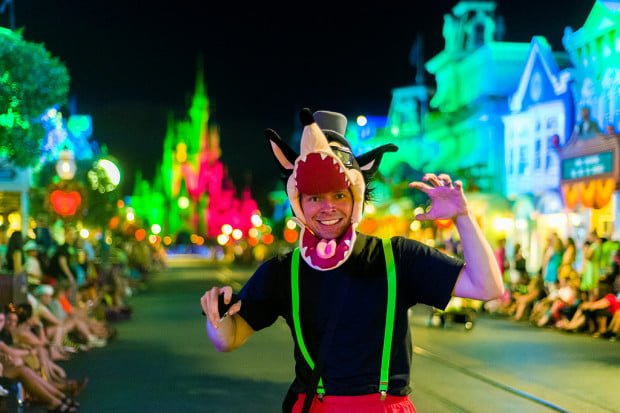 Human Disney Parks Characters – Now, if you don’t want to buy or make an expensive costume, there are a number of human characters in the attractions at Disneyland and Walt Disney World that wear relatively normal clothing with costumes that could be pulled off pretty easily, so long as you can find clothing that’s a close-enough fit, and the right accessories.

Think the hairy-legged pirate on Pirates of the Caribbean. You can probably find a close-enough outfit for him on eBay or at Goodwill (his shirt and pants are pretty standard), but what’s really going to define that costume is the leg hair and the big jug of rum. Simply get a pair of skin-colored tights and glue some synthetic hair onto them. Boom, instantly recognizable costume among Disney fans.

One year in college, I dressed as Dreamfinder for Halloween. I’m not very crafty, so my costume wasn’t exactly the best, but I was pretty pleased with the results at the time (I am too mortified to share photos of my costumes from college–suffice to say, you’d understand why I’m proud of this one if you saw them all). However, the fine folks over at Epbot did a much better Dreamfinder; follow their example if this costume interests you.

Any human character from the parks (or Disney/Pixar Animation–Carl or Russell from Up are other easy ones) who has a distinct look will work like this. You can go as simple or as complex as you want. Someone like the disco scientist from Spaceship Earth (or really any EPCOT Center character) would be easy, whereas one of the Haunted Mansion ballroom dancers would be fairly complex to pull off.

One of my costumes this year is a human Disney Parks character, but I’m not going to share that just now, as I’ve never seen this costume, and I’m hoping to be the first to do it! 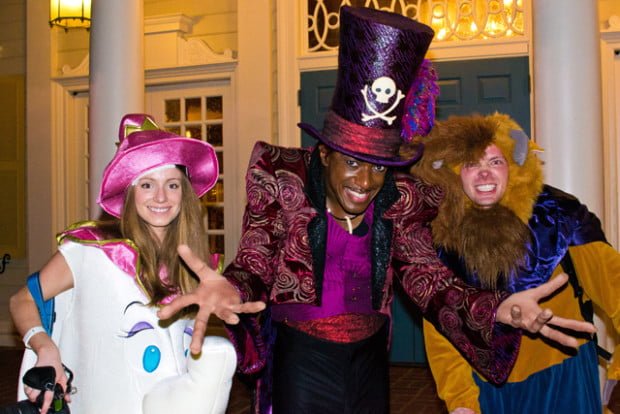 Stay Cool – If you’re going to Florida for Mickey’s Not So Scary Halloween Party, you need to remember that it will likely be hot and humid, even at night. I cannot stress this enough. It’s something about which I didn’t think when I bought my Beast costume a few years ago, and I was miserable the entire time I was outside.

If you make a really elaborate costume that happens to be hot and are going to the Halloween Party primarily to show it off, more power to you. One of the big draws of the Halloween Parties for us is seeing the creative costumes other guests make. There are some really talented Disney fans and cosplayers out there who do incredible work making their costumes. These folks make my costumes look like they were thrown together by a horde of drunken chimpanzees (which probably isn’t far off from the truth).

However, if you’re going to the Halloween Party primarily to enjoy the entertainment and have fun in the park, I’d highly recommend opting for something functional, and as close to an ordinary outfit in terms of bulk. Wearing something heavy won’t just make you hot–it’ll be annoying as you try to navigate the parks. 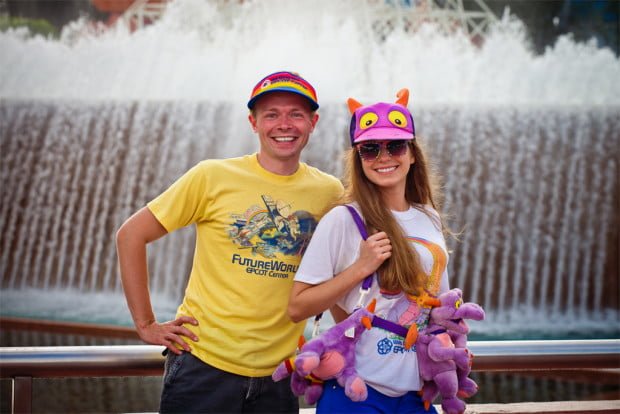 Yeah, But It’s A Family Park… – The advice to “stay cool” doesn’t mean that you should opt for a costume with as little fabric as possible. This is a family theme park, not a frat kegger. I mention this because there are some times when I’ve been a bit taken aback by some costumes I’ve seen, wondering how they were allowed into the park in the first place. 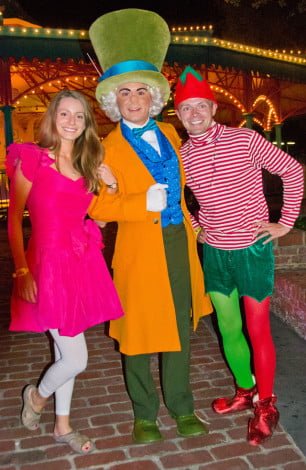 Don’t Be Too Clever – I feel almost bad about offering this advice, since being clever should always receive accolades. However, sometimes attempts at being clever are about as successful as the backstory in Chester & Hester’s Dino-rama. If most people need a verbal explanation to “get” your costume, you might want to rethink it. For example, a few years ago, I went as an unemployed, “Hitchhiking Elf” seeking work at Haunted Mansion Holiday. By the end of the night, I got rid of the hitchhiking elements, and was simply an elf. 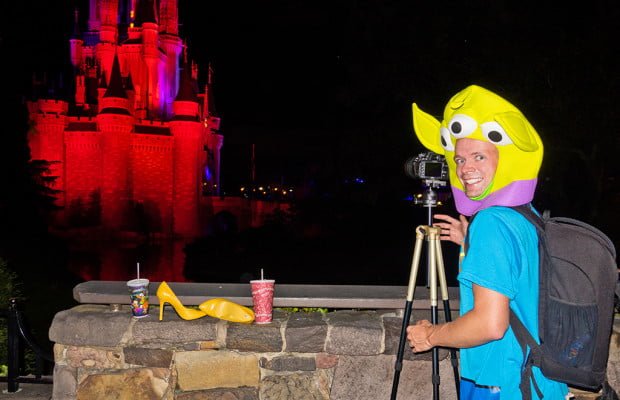 Specific Costume Ideas – With all of the above said, here are some costumes we’ve either done in the past or stumbled upon while trying to put together our costumes for this year…

Evicted Maelstrom Viking – This is a bit cheeky, but it’s an easy costume that doesn’t have to cost too much. Just buy the helmet, optional beard, and random rags and maybe a cape for the rest of it.

Mrs. Potts – This is *only* listed here because so many people have asked where we got our Beauty & the Beast costumes. The Mrs. Potts one isn’t so bad, but the Beast costume is HOT, so think twice before wearing it in the Florida humidity at Walt Disney World. (There’s also a cheaper Chip costume if you’d rather have that–or want it too for a mother/child costume combo!)

Beast – The Beast costume I wore is readily available on eBay, and it’s a fun costume, but cool it is most definitely not. I think I sweated out 20 pounds the night I wore it! This is a better option for Disneyland, where fall evenings can be on the cool side. Alternatively, there’s this more conservative Beast costume that won’t be nearly as hot.

Belle – If you don’t want to be a frumpy teapot, going as Belle in her provincial dress and apron is a great alternative.

Astronaut – When we went as astronauts, we bought jumpsuits plus NASA and Disney patches and made our own costumes. Now, you can buy a ready-made astronaut costume for less than our homemade costumes cost.

Indiana Jones – Combine some cheap accessories with standard clothing that you can likely find at Goodwill or a thrift shop, and you have a recognizable and cool costume on a dime.

Tron – We were going to do homemade Tron costumes a couple of years ago, but not all of our supplies arrived in time. Basically, the idea here is a black body suit covered with reflective tape and/or light-up stuff. This allows for some creative liberty, as all you really need is the identity disc for people to recognize this as a Tron costume.

Minnie Mouse – Another relatively cheap & simple costume, and one that will photograph well. Sarah made her own version of this a few years ago, and a ton of people commented on it. Just be careful not to get the “sexy” version of this costume. (Sexy Minnie Mouse? REALLY?!?)

Mickey Mouse – Same idea, except more dorky than cute. I’d probably just buy a Sorcerer Hat and a lightweight robe rather than buying this.

Olaf – Finally, If you don’t want to be accused of originality or want to blend into the crowd, go as anything from Frozen.

If you want a hot character that probably won’t be a popular costume, go as BB-8 from Star Wars: Episode 7. I have no clue how to make this costume…maybe find a giant hamster ball and paint it?

If you want to make something yourself, there are a lot of options for fairly easy costumes–especially human characters, as mentioned above. Pinterest actually has a section devoted to “Easy Disney Costumes” that might help you out.

As we stumble upon more costume ideas, we will update this post, too. 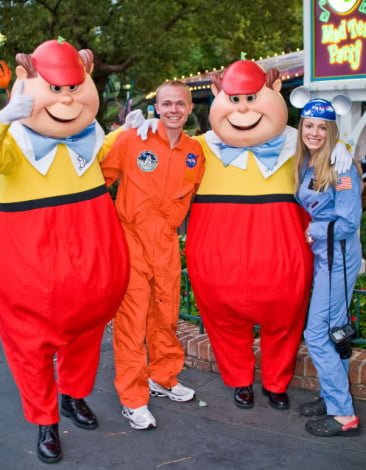 If you’re planning on doing Disneyland, Walt Disney World, or any of the international parks this Halloween season, make sure to consult our Halloween at the Disney Parks post for resources to help you plan your Halloween itinerary, meet characters, and more!

For updates on Halloween 2015 at Walt Disney World and Disneyland, plus the latest news, discount information, and tips, sign up for our free monthly newsletter!

Have any costume recommendations, either homemade or store bought (feel free to post links)? Are you doing Mickey’s Not So Scary Halloween Party (Walt Disney World) or Mickey’s Halloween Party (Disneyland) this year? Already have your costume made? Hearing from you is half the fun, so please share your thoughts on these questions, or anything else, in the comments!