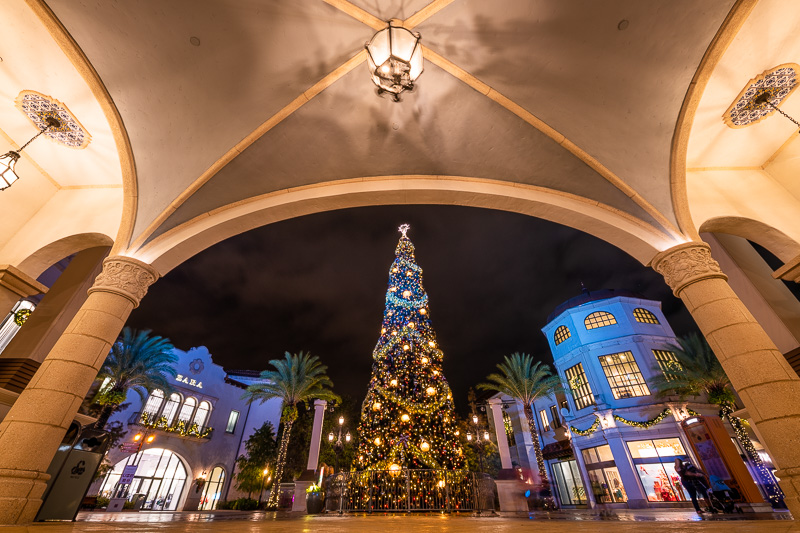 It’s time to head over to Disney Springs for the holiday season. In this report, we’ll share an update on weekday v. weekend crowds, Christmas decorations & entertainment, and more from Walt Disney World’s shopping, dining, and entertainment district.

This condenses a couple of our recent visits to Disney Springs before and after the busy holiday weekend. Since our last update, we’ve made several trips for meals, snacks, and various in-store deals at some retail locations around Disney Springs. (Including our wild goose chase for the New Starbucks Walt Disney World Icon Tumblers & Christmas Ornaments, which we’ve since consistently seen available in each of the parks.)

As should be expected during December, Disney Springs is busy. The holiday shopping season is the highest time of the year at Disney Springs crowd-wise, and thus far this year is proving no different from the norm.

On our most recent visit, here’s what we encountered after parking: 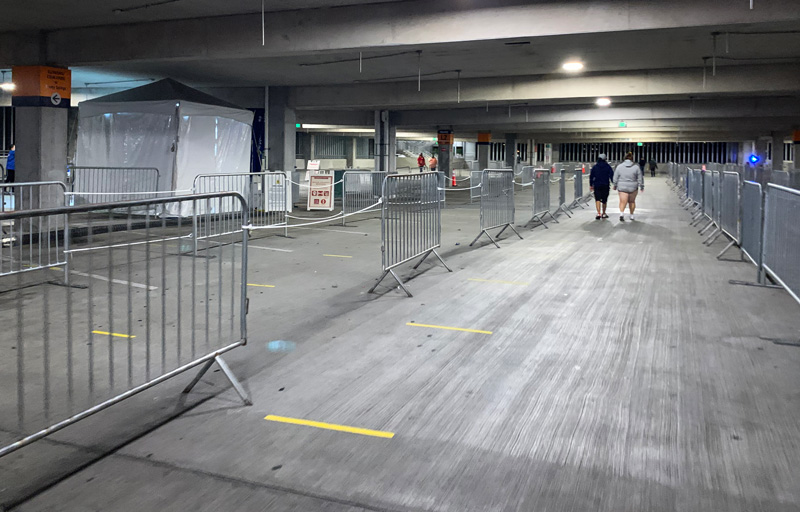 This photo doesn’t do justice to the full length of the queue, but it’s massive. We’ve talking an Avatar Flight of Passage-length queue here that takes several minutes just to navigate when empty.

While virtually none of this was in use during our post-holiday weeknight visit, we’ve heard from readers and seen social media reports that it was absolutely bonkers on Friday and Saturday nights. 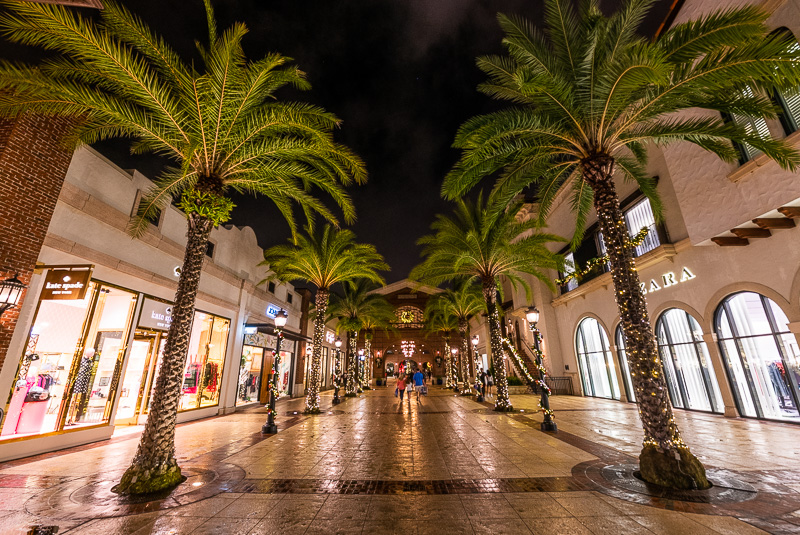 On the weekend, there were waits of over an hour just to get through the temperature screening and bag scanning. Don’t expect that to be an anomaly due to the high crowds of Thanksgiving. Maybe they won’t be quite that long, but lines to enter are likely on weekends up until Christmas.

I’m not sure if we covered it last time, but bag check is now a thing at Disney Springs; it’s incredibly efficiency with the new contactless scanners. Those Evolv Express scanners have been the unsung addition of the post-reopening changes at Walt Disney World–better than the systems at Disneyland Paris and Universal Orlando that we’ve championed in the past. 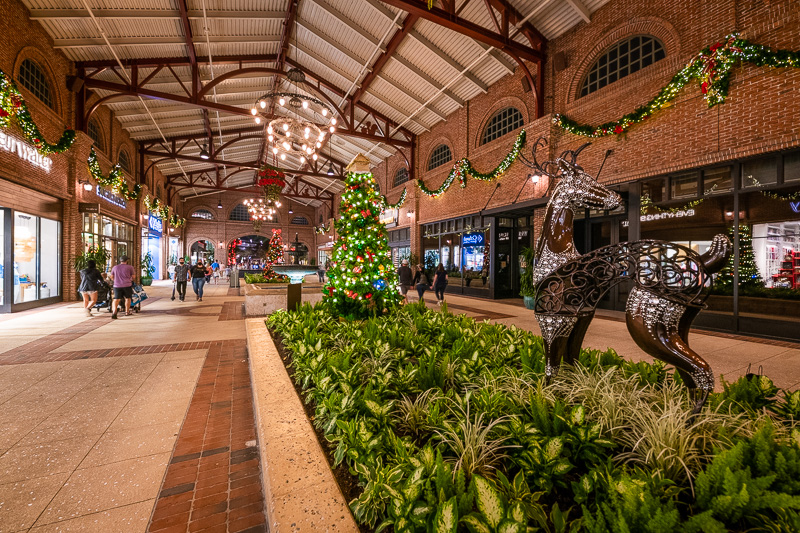 The crowds we’ve encountered have been low to moderate for the holiday season, which is in large part because we’ve opted to visit on colder or wetter evenings.

Normally, weeknights during Christmas-time are busy–just not as bad as the weekends. 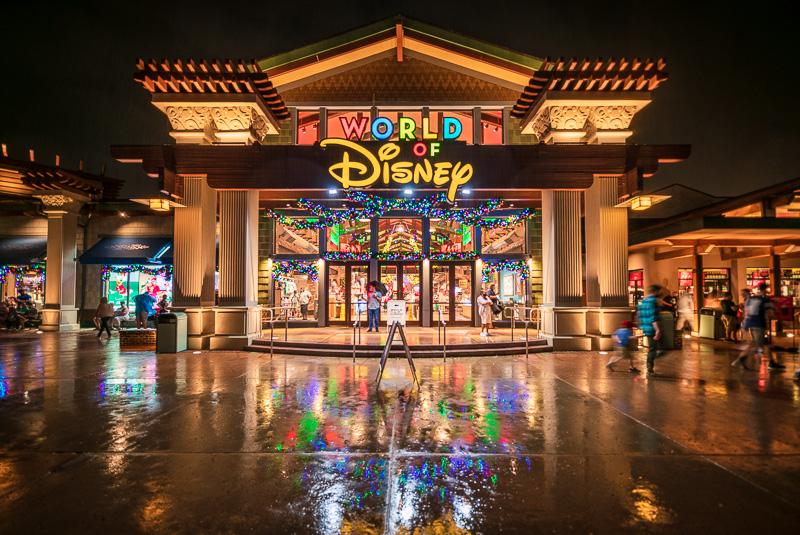 With Disney Springs now open until 11 pm nightly, there’s really no reason to go on Friday or Saturday nights. We’ve been warning against weekend visits for months, but that’s doubly true now.

It’s not just about tolerance for crowds. If you drive, you’ll have to deal with traffic, wait to park, and get through that winding line. If you take Disney transportation, you’ll still encounter lines to enter Disney Springs itself, and again for some stores. That’s all assuming that Disney Springs isn’t at capacity when you arrive. Seriously, avoid weekends at all cost for the rest of the month. It just is not worth the headaches. 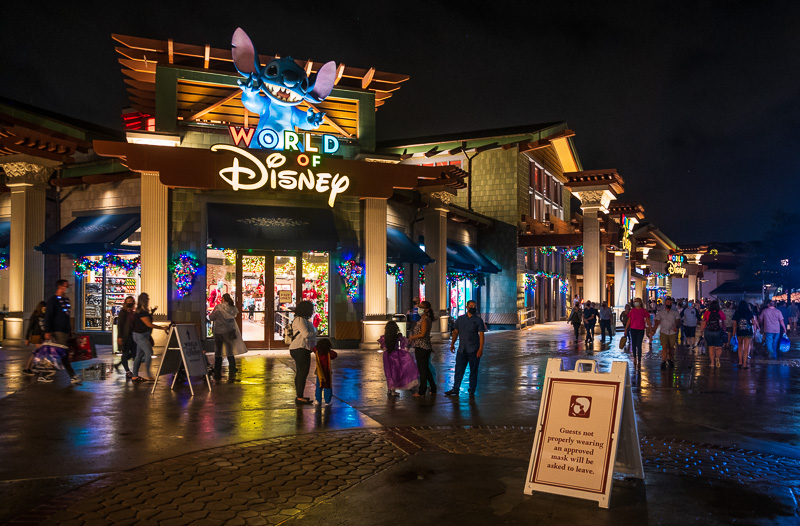 Even on the significantly less busy evenings we’ve gone, there has been a line to enter World of Disney and some other stores.

We’ve waited ~20 minutes even on nights with low crowds, so I cannot imagine how lengthy the lines must be on peak evenings. 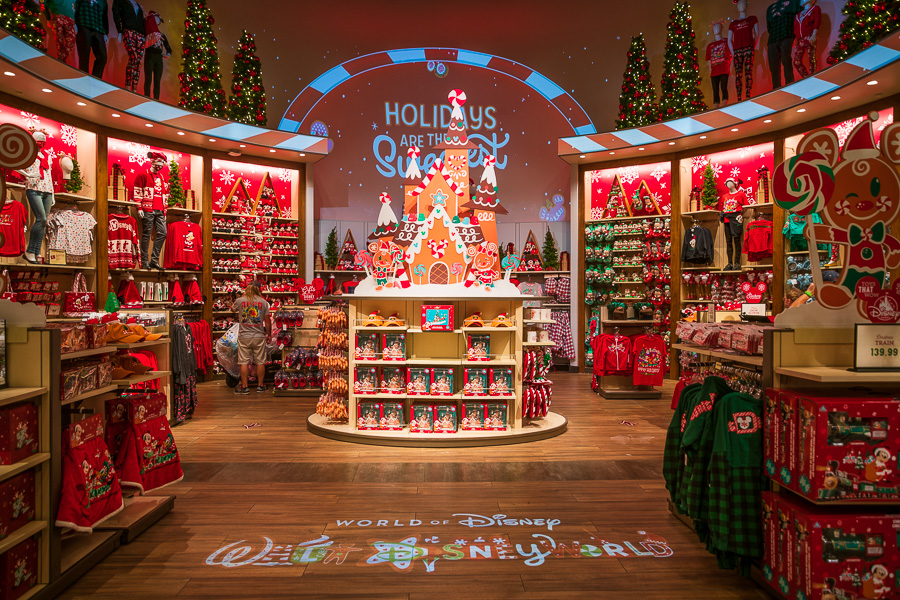 I’m not one to wait in line to shop, but World of Disney is fairly “worth it” given the range of items and some of the cool seasonal displays.

Also, I’ll concede that although I’m not keen on the generic redesign, the ease of browsing World of Disney has increased exponentially since they opened up the floor-plan and widened the walkways. Unlike a lot of stores at Walt Disney World that feel claustrophobic, World of Disney is much more pleasant. 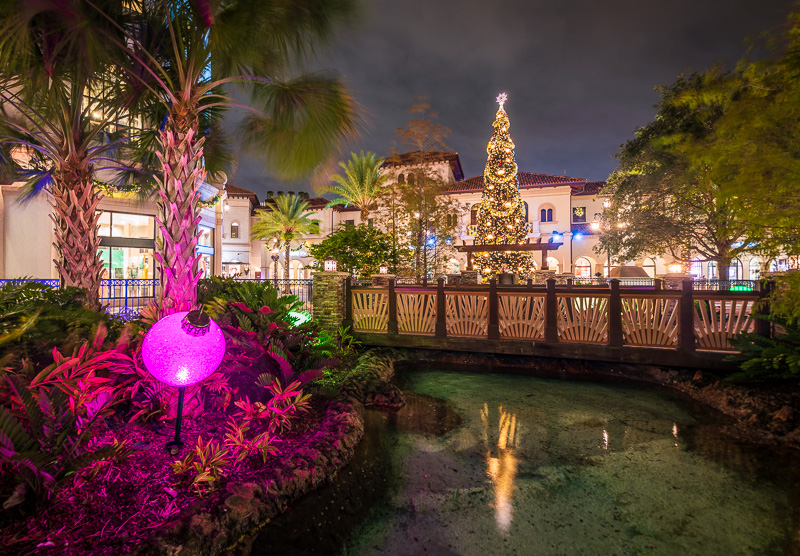 Those who do visit this month will find Disney Springs decked out for Christmas, with its icon tree, garland, a variety of displays, and other decorations.

Some areas of Disney Springs, especially in the Town Center and Westside, can normally feel a bit sterile and generic-looking. While there’s not a ton of decor, and what’s there is not overly elaborate, it is sufficient to give these areas needed warmth and charm. Same goes for the snow flurries; Disney Springs is the only place at Walt Disney World doing those this year. 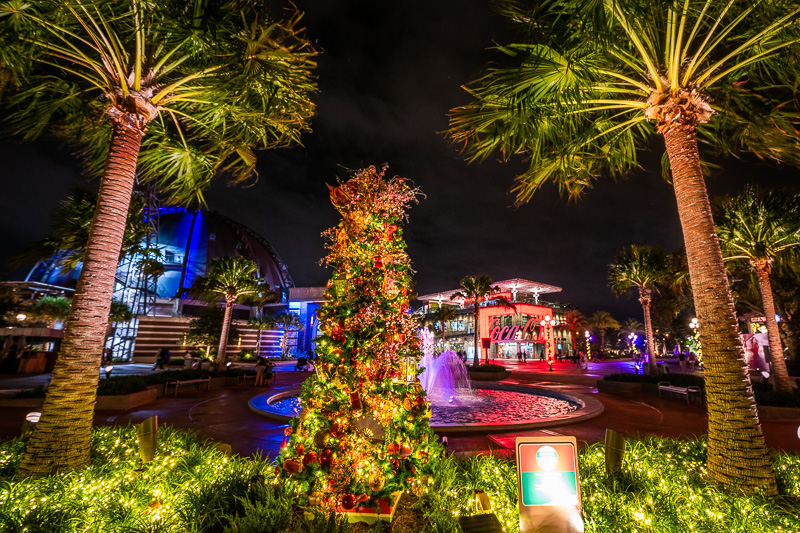 A big component of the holiday season at Disney Springs is the modified Christmas Tree Stroll.

Previously, this was the Christmas Tree Trail in a temporarily walled-off area back in the old Downtown Disney Marketplace bus loop. 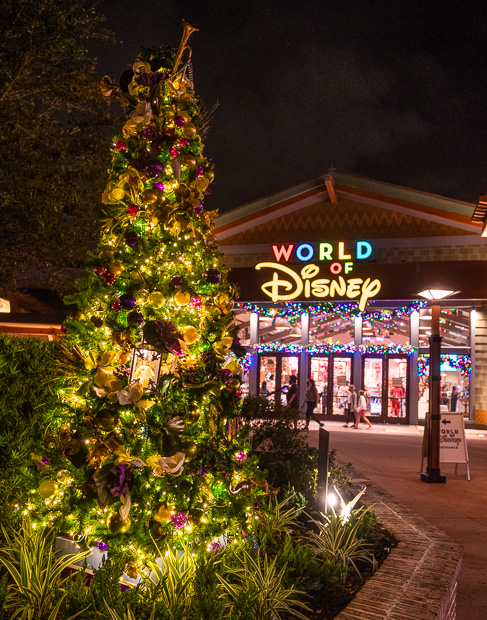 The year that debuted, we criticized the Christmas Tree Trail as feeling amateurish and akin to something you’d find in a Wal-Mart parking lot. In subsequent years, we’ve praised how it has been fleshed out, given new details (like extinct attractions posters) and has felt like a more substantial offering befitting of Walt Disney World. 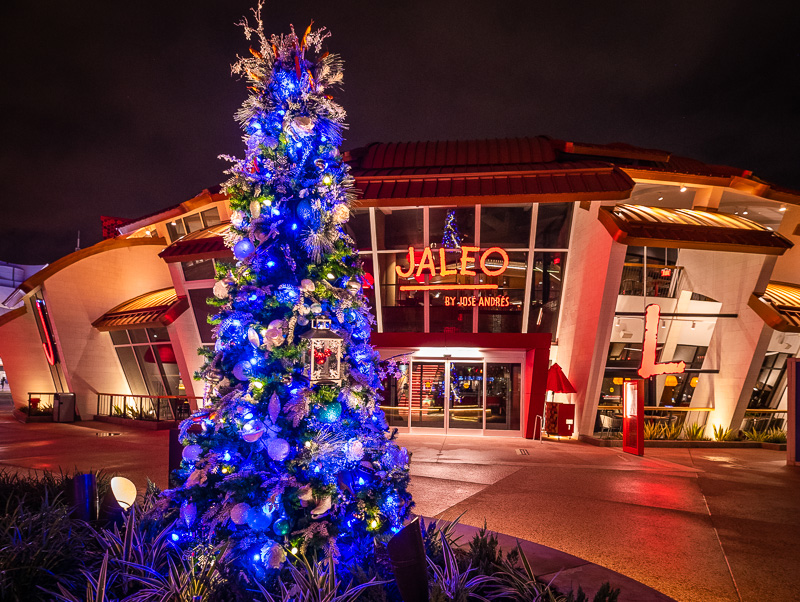 Well, now we’re going to complain about the Christmas Tree Stroll (there’s no pleasing us!). Not really complain, as the trees are still lovely and it’s fun to scour Disney Springs in search of them all (you can also pick up a map, but we always forget to do that).

However, it’s just not the same. The Christmas Tree Trail fired on all cylinders when it coalesced into a singular offering, with the motif trees tied together with the other decorations, posters, and window-dressing. Scattered about individually, these don’t pack nearly the same punch. With that said, I’ll take these trees scattered around over nothing at all. 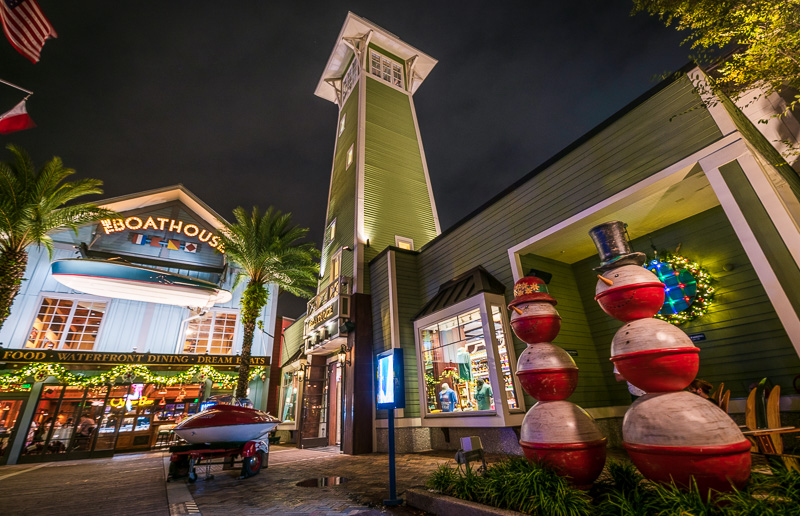 A disproportionate number of the Christmas Tree Stroll stops are over on the Westside, which is probably because the area is otherwise devoid of decorations.

One of my favorite areas is around Jock Lindsey’s Holiday Bar and the Boathouse. Some unique and thematically-appropriate decor over here that can be easy to miss. 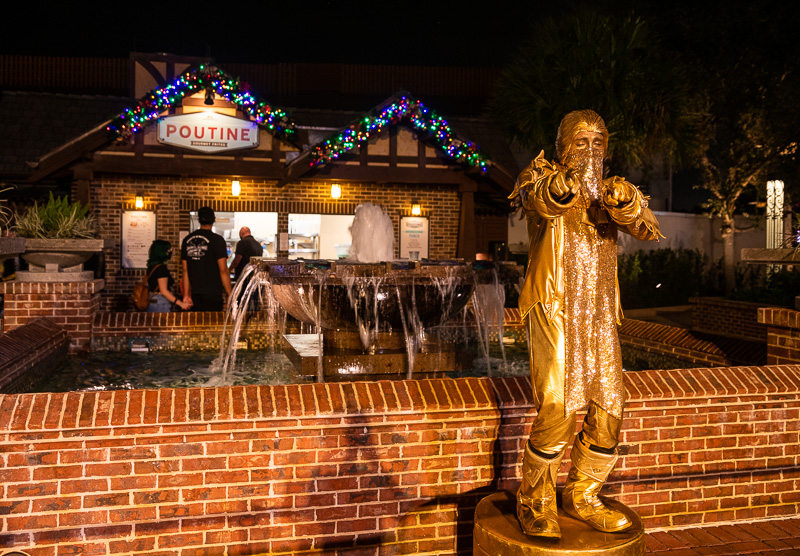 There’s also a variety of entertainment around Disney Springs for the holiday season that makes the shopping center come to life.

Not as much as you’d normally see during the holidays, but still a solid amount. 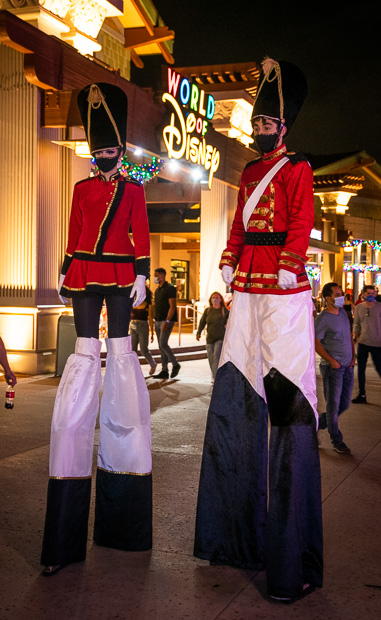 My favorite is the Toy Soldier Stiltwalkers.

I spent 10 minutes trying to get a “clean” photo with both of them looking at the camera, all to no avail. A few minutes later while scarfing down a yule log, they came right up to our table and interacted with us at length. Since I eat with my hands like a barbarian, I couldn’t pick up my camera for a good photo. 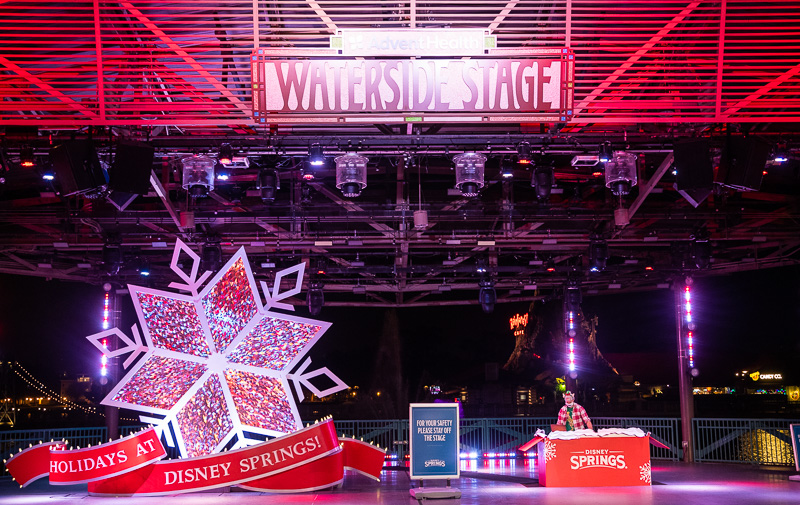 In addition to the Toy Soldier Stiltwalkers, there are supposedly Snowflake Skaters. We’ve yet to see those this year.

On the Waterside Stage and in Exposition Park, guest DJs also play music to keep the energy up. 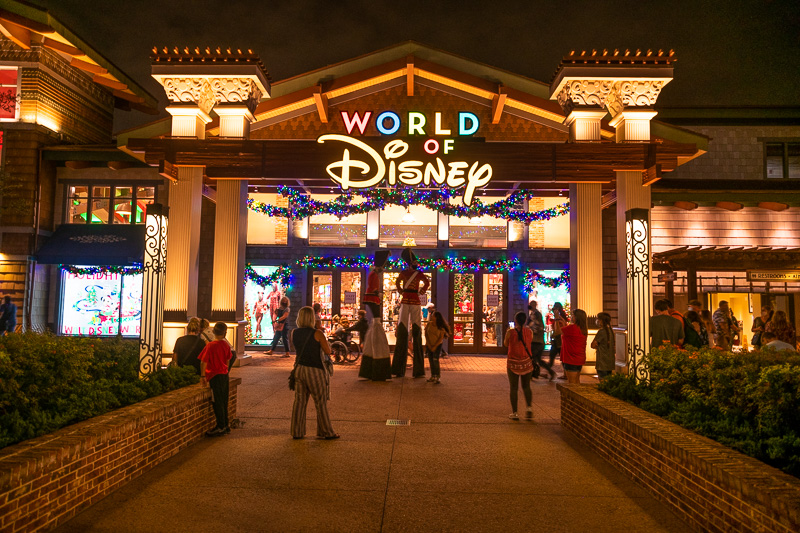 If you’re looking for the ‘streetmosphere’ performers, the best area for this is between Amorette’s Patisserie and the far side of World of Disney. 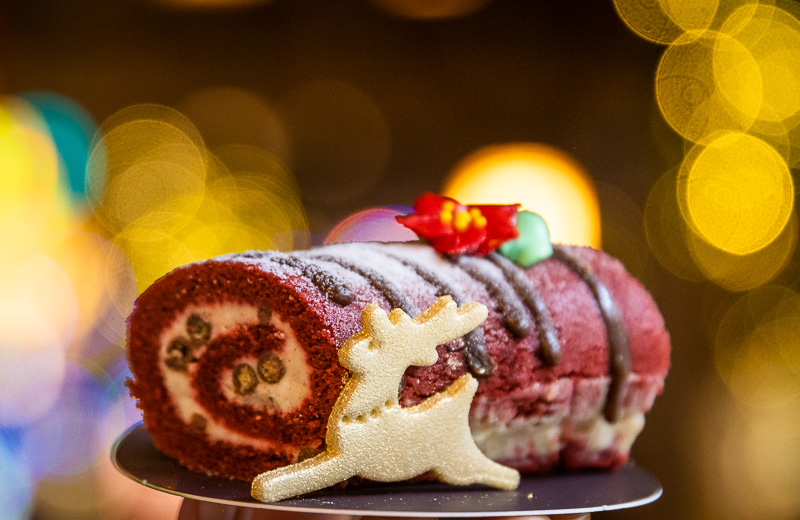 Out of all the special snacks for Christmas at Disney Springs, the yule log at Amorette’s Patisserie was my #1 most highly-anticipated treat. I’m a total sucker for yule logs, and Amorette’s is one of my favorite dessert spots at Walt Disney World. It seemed like a slam dunk.

Unfortunately, this is among the most disappointing desserts I’ve had in a while at Walt Disney World. Incredibly expensive, small, lacking in flavor. The only thing that’s good about it is the presentation. Also, and perhaps this is a matter of personal preference, but the yule log was way too airy (I like them dense). It cost nearly double the price of the Magic Kingdom yule log, is half the size, and about half as delicious. This is the first dud I can recall buying from Amorette’s, so it doesn’t taint my opinion on the patisserie, but it was nevertheless disappointing. 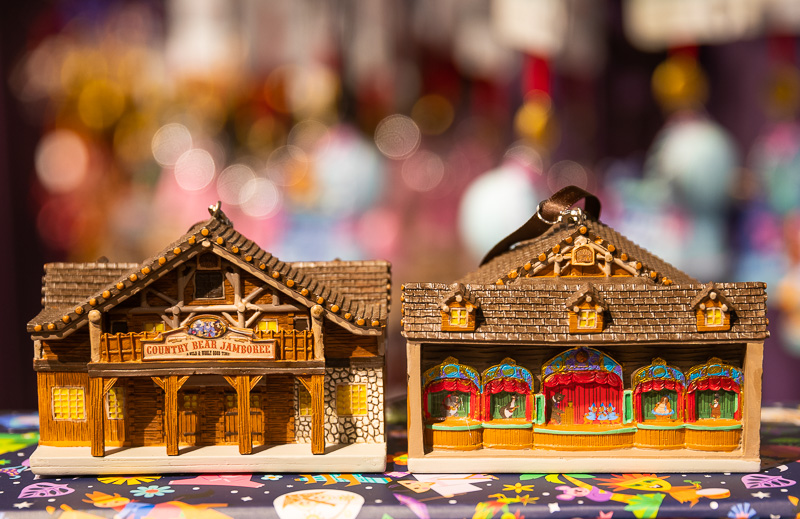 We’ll end on a positive note, with a look at one of the greatest Christmas ornaments of all time. I actually feel like not posting about this weeks ago was a dereliction of my duty as a Country Bear Jamboree fan.

There are similar ornaments for other attractions, plus iconic Walt Disney World and Disneyland building facades, but obviously Grizzly Hall is the one you all will want to purchase.

That’s how things presently stand at Disney Springs. As with the parks, Walt Disney World has done a good job with the modified Christmas offerings, but it still doesn’t have the same impact this year. Nevertheless, we’ve had pleasant visits in the last few weeks. That’s almost entirely because we strategically visit at times when crowds are likely to be at their lowest; don’t expect a similarly enjoyable experience on weekends. In fact, we wouldn’t do Disney Springs on a Friday or Saturday night right now if you paid us.

If all goes accordingly to plan, we’ll be back with another Disney Springs update before the end of the year. We’re still anxiously awaiting the debut of Gideon’s Bakehouse, which is going to bring the best cookies ever to Walt Disney World. Visible work progresses on the facade, but it wouldn’t surprise me if the opening of Gideon’s Bakehouse slips into 2021. Hopefully that isn’t the case, as we want some of those special Christmas cookies!

Have you visited Disney Springs during the Christmas shopping season? Did you have issues with parking, crowds, transportation, or lines to get through health screening or security? Weekend or weekday visit? How was your experience? Would you recommend others visit, or hold off? Thoughts on the Christmas Tree Stroll v. Trail or anything else happening for the holiday season? Will you be visiting Disney Springs in the near future? Do you agree or disagree with our assessments? Any questions we can help you answer? Hearing your feedback–even when you disagree with us–is both interesting to us and helpful to other readers, so please share your thoughts below in the comments!