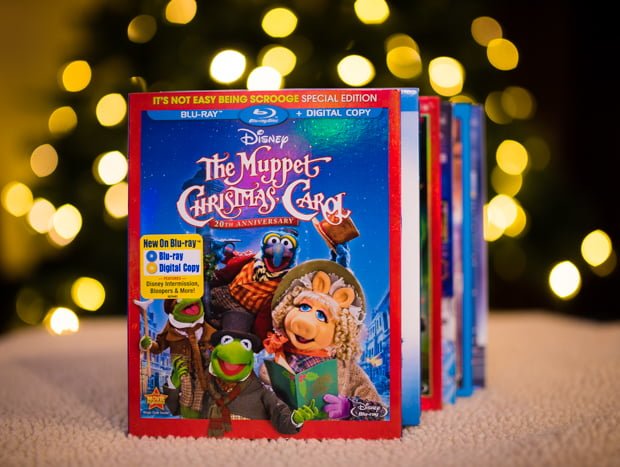 If you’re like us, Thanksgiving weekend marks the start of Christmas movie season. In this post, we compile our favorite Disney Christmas films and holiday specials, many of which are available free via streaming services like Disney+, Netflix, Hulu, or Amazon.

Some of the entries on this list are obvious titles that every Disney fan has probably seen. For other choices, we went with some deeper cuts that are not commercially available or are just lesser-known. The good news is that over half of the list is now available streaming, so you don’t have to chase down a rare DVD or scour YouTube for obscure titles…

In large part, this is thanks to the launch of Disney+, which already features a formidable lineup of holiday titles. By my count, there are over two dozen Christmas titles on the new service (unfortunately, there’s no Christmas collection, so you have to search for various keywords or click on one holiday film and see what else is in the “suggested” tab.

Disney+ Christmas movies that didn’t make this list include several versions of A Christmas Carol, a bunch of cheesy-but-heartwarming made for television movies, as well as a bunch of titles included thanks to the acquisition of 20th Century Fox. As much as we love Home Alone and Miracle on 34th Street, we’re excluding these from the list because they weren’t in any way associated with Disney for the first several decades of their existence. 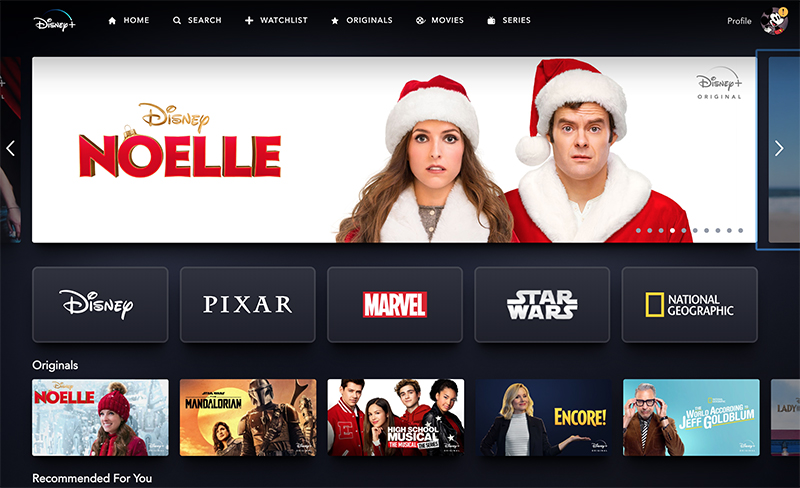 Anyway, here’s the list of what does make the cut for our favorite Disney Christmas movies and specials…

BONUS: Holiday Time at Disneyland – I can’t help but get chills when watching Walt Disney’s opening of this episode. That, alone, ensures this a spot the list. It doesn’t rank higher because a lot of this episode of Walt Disney’s Wonderful World of Color has nothing to do with Christmas, but if you haven’t seen many episodes of this, it’s well worth watching. This promotes a lot of the new offerings at Disneyland under the guise of holidays, and there’s some excellent footage.

Perhaps the biggest disappointment of Disney+ thus far is the lack of this and other classic Walt Disney-hosted television programming. As Disney’s streaming service is still in its infancy, here’s hoping that’s remedied before next Christmas!

10. Beauty and the Beast: The Enchanted Christmas – As is probably clear if you’ve read our review of this blu-ray, we aren’t the biggest fans of this direct to video sequel of the animated classic Beauty and the Beast. The plot is flimsy, the animation is sub-par, and a lot of the humor is suspect.

However, it also features some beautiful scenery, familiar and beloved characters, and a sufficient dose of yuletide glee. It’s pretty far from being a classic, but the Enchanted Christmas has its moments and is worth putting on in the background while you’re preparing a Christmas feast. (With all of that said, I’ll Be Home for Christmas might be more deserving of its spot, and perhaps is deserving of a rewatch now that we have it on Disney+.)

9. From All of Us to All of You – This reminds me of a television version of World of Color. It’s not great, but the clips tug at your heartstrings. Per Christmas Special Wiki: “The special has been shown infrequently in the US in recent years, but in the Nordic countries…the show has been broadcast every year since 1959, and has become a holiday classic.

Ratings show that around 40% of all Swedes watch it on Christmas Eve, the record (in 1997) being just over half the population.” Now, we all know wiki sites are the paramount in scholarly credibility, but even if that’s a slight exaggeration, it’s pretty remarkable. It took me a good amount of searching to find this full episode, and it’s no longer available commercially. Yet, it not only airs annually in other countries, but is a bonafide Christmas classic there. Pretty wild!

8. Christmas Eve on Sesame Street* – Okay, so this one is an exception. Most Disney fans probably know that Disney was on the precipice of acquiring The Jim Henson Company when its founder passed away in 1990, causing the deal to fall through. When Disney finally acquired the Muppets over a decade later, Sesame Street (and other properties) were not part of the deal.

Nevertheless, I think in heart and spirit, Henson’s creations are all in the Disney family (c’mon, if we consider Darth Vader and Ivan Vanko “Disney characters” we better give Oscar the Grouch the same respect). As such, I’m counting this; it’s a heartwarming tale of Big Bird being perplexed over how Santa fits down chimneys, with a lot of fun from the denizens of Sesame Street along the way. I fondly remember watching this as a kid, and Sesame Street is as “relevant” today as it was then.

These are true Disney animated Christmas classics, and deserve a place on this list…particularly when that list has otherwise bended to include a couple of titles that technically aren’t even Disney. 😉

Now, I have a much greater appreciation for the artistic side of the film, and also like the characters and fairly unique concept. If I’m being objective, this should probably be a top 5 entry on the list.

5. The Santa Clause – Another nostalgia pick. Growing up in Michigan, native son Tim Allen was a pretty big deal. My family watched Home Improvement religiously (sometimes just to see what local college Allen would be reppin’ with his attire) and went to see every film of his in theaters.

This was one such film, and I absolutely loved it. I still find it to be a ton of fun and I think it has aged pretty well, all things considered. I’m not sure it’s an all-time live action Christmas classic, but it’s as a sappy Christmas movie with heart, it remains something I’ll watch once per Christmas season. 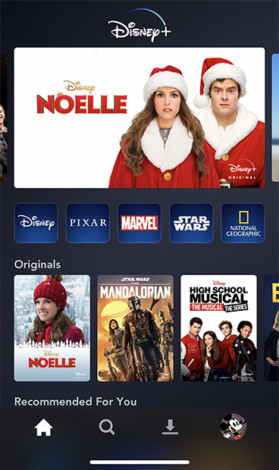 4. Noelle – I’ll admit to being biased here. I think Anna Kendrick and Bill Hader are both hilarious (who doesn’t love Stefon from SNL or Barry?!) and Noelle was the very first thing on Disney+ that we watched. It’s predictable from the first scene, derivative, and a bit cheesy. However, Noelle is also heartwarming, humorous, earnest, and endearing. It also makes the most of what’s clearly a healthy budget with some nice special effects and one of the most adorable CGI characters in recent memory.

With Noelle, Disney+ mixes the formulas of Elf and Hallmark movies to create something unique, memorable, and charming. Unlike Netflix, which gently skewers the holiday genre with films you can laugh at (such as A Christmas Prince or Christmas Chronicles), Noelle is a heartfelt and irresistible movie that you’ll also laugh with. Much like the Santa Clause, this is “Disney” at its heart–which is also evident from the outset, thanks to things like hidden Mickeys and Duffy plushes in the sets.

3. Emmet Otter’s Jug Band Christmas* – Another title that was not part of Disney’s acquisition of the Muppets, this has resulted in home releases that cut the intro/ending with Kermit (which is, interesting, still present when ABC Family airs the movie).

Nevertheless, this twist on the classic “Gift of the Magi” has the endearing charm, personality, and magic of Henson characters, and some catchy musical numbers. While it lacks the humor that typifies the Muppets, it’s more heartwarming, and for a Christmas film, that is a perfectly fine trade.

2. A Muppet Family Christmas – Unless you like to drop stacks-o-hundos on low-quality DVDs of television specials, you might not be familiar with this one. That is, unless you’re a child of the late 1980s/early 1990s. For us, it was a Christmas staple. I had a VHS recording from the television with this, Will Vinton’s Claymation Christmas, and A Garfield Christmas.

This special has it all–from the Muppets to Sesame Street to Fraggle Rock…to even Jim Henson, himself! The musical numbers are memorable, and there’s some great humor in here. The writing lags a bit as compared to the top 2 on this list, but it’s every bit as memorable, and remains a Christmas staple in our household.

Second is the performances of the three main characters: Gonzo, Rizzo the Rat, and Michael Caine. Having Gonzo play Charles Dickens was a bold move that paid off and provides several brilliant comedic moments. Finally, Brian Henson’s work as director is impeccable and worthy of his father’s legacy. I belabor these and several other points in my lengthy Muppet Christmas Carol Review, but suffice to say, this is the best Disney Christmas film by a wide margin.

That’s it for the list. In addition to what’s here, I’d give a few more honorable mentions to A Magic Kingdom Yuletide Special (a show that reminds me a lot of “Celebrate the Season” mixed with a big dash of 1980s), Babes in Toyland (even though I’m not a fan, I recognize it has a place in Disney history and others love it), and Prep & Landing. I know there are countless other Disney Christmas specials that didn’t make the cut–at one point there was a new one every year, plus the parade–but I either don’t remember those or they aren’t available now…or both. Here’s hoping additions to the Disney+ catalogue over time remedy this, and we’ll be back with another update and expansion to this list!

What are your favorite Disney Christmas movies, television specials, etc? Think the Muppets are deserving of a clean sweep of the top 3? What about Noelle? Any other holiday movies you’ve watched on Disney+ thus far? Anything we’ve snubbed that you think deserves to make the list? Any questions we can help you answer? Hearing your feedback is both interesting to us and helpful to other readers, so please share your thoughts below in the comments!