One of my favorite things to collect is Disney-produced books that you would find for sale exclusively in the theme parks. I find them to be the perfect thing to lounge around and read outside on a lazy Saturday, something to peruse on the plane, or even something to set on the coffee table. Looking through them ‘takes me back’ to past vacations, and has even helped give me photo ideas.

While collecting these books, it would seem, would be a relatively inexpensive hobby, that is far from the case. Some of these titles sell for over $100, and are very rare. It’s even worse with Disneyland, where the more sought-after books can fetch over $500.

Here is a glimpse into my library of Walt Disney World books, and my thoughts on each of them:

Since the World Began: Walt Disney World – The First 25 Years

– If you’re considering building a Disney book collection, this is the place you should start. First, it’s relatively inexpensive, so you’re not out much money if you don’t end up getting into the “hobby.” Second, it’s incredibly detailed with plenty of interesting text, and features an awesome snapshot in time in Walt Disney World history (1996). It includes fairly common information (well, at least for a Disney Dork, like me), but also more detailed information such as the rationale behind the coloring on the roadway signs at Walt Disney World. I recently upgraded my copy to the hardcover version because I enjoy this book so much. The Art of Walt Disney World

– This is by far the best book on this list. Unfortunately, it’s one of the most expensive (it originally retailed for $50 and now sells for $85-150 on the resale market). The book features mostly concept art and explanations thereof, much of the art predating the Resort itself, and much also never coming to fruition. I consider those shots perfect visual explorations. Well, almost every piece of concept art in this book is the perfect fusion of both a beautiful focal point and a myriad of details for the viewer to explore. If you’ve seen the new Fantasyland concept art, you know what I’m talking about–countless details that really make you say wow, and an artistic flavor that take the images beyond the realm of simply a statement of “what’s to come.” The images in the book are large while the text is kept small (as it should be), and the layout is wonderful. I was also pleased to find a good deal of Tomorrowland concept art, although that is more of a personal benefit. I found myself wanting to race through the book to find certain images I knew were there (based on online reviews) only to stop and carefully gaze at breathtaking images I’d never seen. The “re-readability” factor of this book is incredibly high, and it would make the perfect coffee table book for any fan…if you’d trust your coffee table to hold it!

– Another great option because of its price and due to the time period in which it was produced (1998), this book has become a real favorite of mine as a Wikipedia-style source of background information concerning attractions, and a timeline of the resort in general. Most of the photos are overly-staged or edited “Guide Map Style” pictures, but they’re cool and different, nonetheless.

Around the World with Disney

– This book is an interesting departure from the standard souvenir books produced each year, as it compares and contrasts attractions from the global parks to one another. It’s not necessarily a Walt Disney World book per se, but it seems there’s an emphasis on the Florida parks. It hasn’t been out of print for more than a few years, but it’s surprisingly cheap given its out-of-print status and unique nature. I haven’t seen too many copies of this pop up on eBay, which is usually indicative of a shortage. I’d snatch this book up now, as it wouldn’t surprise me if it hits $50 or more in the next couple of years. 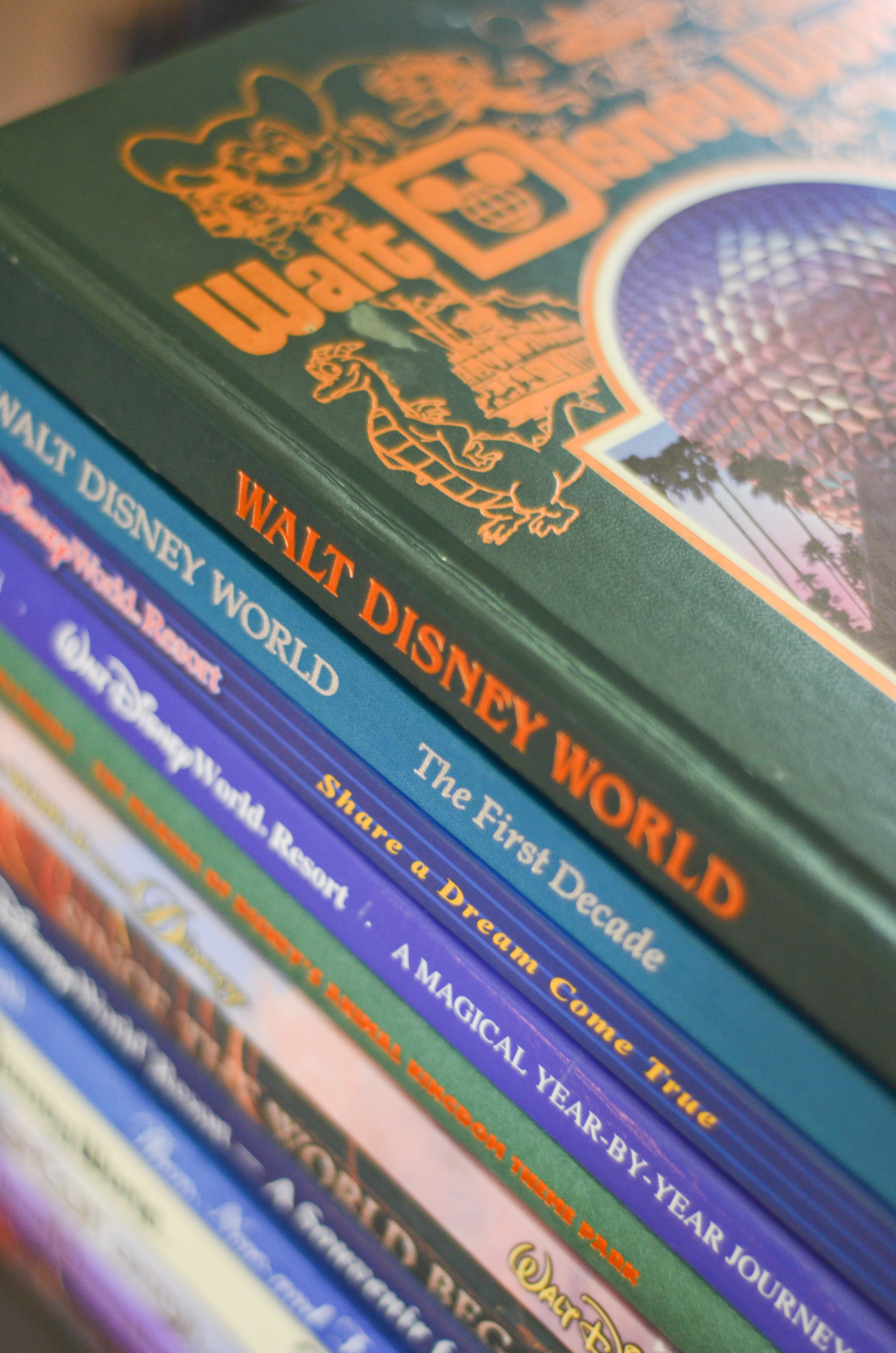 – One of the more recent titles, this is one of the rare titles that showcases current attractions and extinct attractions that were previously there in their place. The Disneyland version, review forthcoming, is far superior, but this book is no slouch in its own right. This version focuses primarily on the “Now” whereas Disneyland’s focuses primarily on the “Then.” This one was co-authored by the now deceased Bruce Gordon (buy any book you can bearing his name–they’re all gems), which means it has shot up in price since going out-of-print. Even though it was released in 2008, copies of it regularly sell for $50.

– Any fan of EPCOT Center owes it to themselves to have this book in their collection. Much of this book (of which there are actually two versions with slight variations) was created before EPCOT Center opened, and as such, is inaccurate to what actually did end up opening. We’ve all heard about the World Showcase pavilions that were never built, but it’s really cool to read about them as if they were “coming soon.”

– The proper title of this book is simply “Walt Disney World” but I added the 15th anniversary portion to differentiate it from 1993’s book by the exact same title. This is a souvenir book in premise, but the photos are gorgeous and this book probably has the coolest cover of any souvenir book ever released. If you only buy one title between this, The First Decade, and 20 Magical Years (as all feature fairly similar photos) make it this.

– This book, by Joe Rohde’s wife, is far more text-heavy than any of the other titles on this list. The author had amazing behind the scenes access during the construction of Disney’s Animal Kingdom, and this book reflects that. It’s not a mere touristy fluff piece. It contains very interesting photos and descriptions of the park. Any fans of Animal Kingdom, or anyone who wants to appreciate the park more, should check this out. 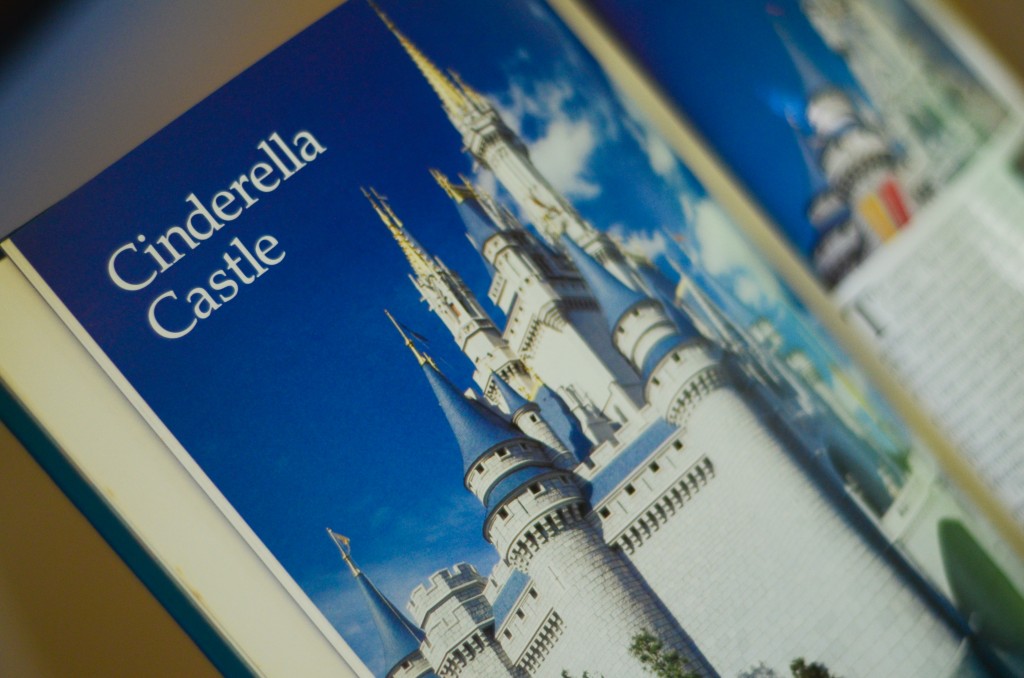 – 100 Years of Magic is incredibly similar to the Souvenir for the New Millennium title. Very similar. Near the same number of pages, 80% of the same photos similar. They basically have different covers and layouts. Luckily, they’re both really cheap and easy to find.

Walt Disney World Resort: A Souvenir For The New Millennium

– Fairly unique photos (including a hilarious one of some tourists wearing decidedly 90s Little Mermaid shirts) in a book organized by attraction, this book is one to definitely check out. Features fairly in-depth coverage of The Disney-MGM Studios and the Vacation Kingdom.

– This title is pretty similar to the 15th anniversary title, but does feature some new photos. Because it’s relatively cheap, I think it’s also worth picking up. There is another title, released the year before this, simply called Walt Disney World with a white cover, the Castle, and fireworks, that I’ve heard is almost identical to this. I haven’t been able to acquire that version yet.

If you’re considering purchasing any of these titles, Alibris, Amazon

, and eBay are all good options. I will caution you, though, make sure to purchase from a listing that includes a photo. Most of these books do not have ISBN numbers, and are prone to being mislisted by sellers if there is no photo on the item page. I’ve received the incorrect book a couple of times.

Join me in the next installment when I share my Disneyland book collection, and my thoughts on those titles! What books in this list do you own? Which do you like best? Share your thoughts in the comments!