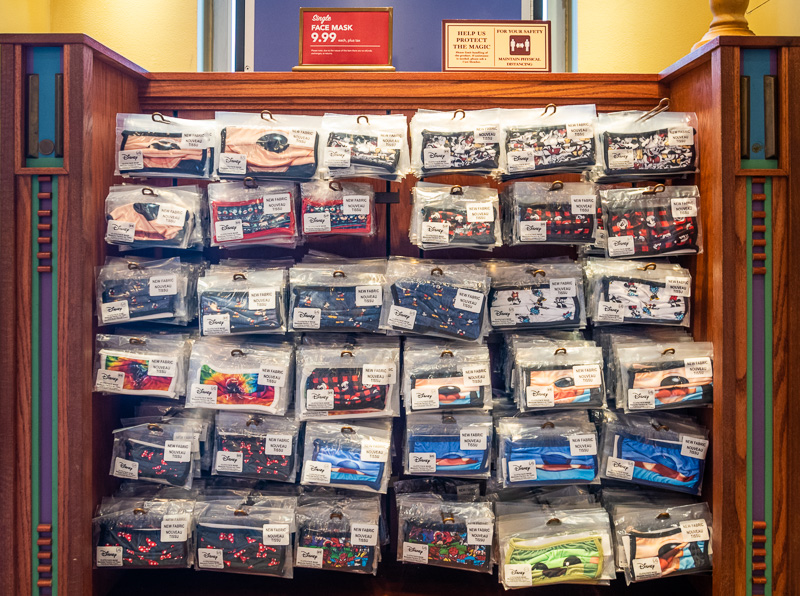 There have been some changes on the face mask front at Walt Disney World, with new Christmas designs, a big price increase, new material, another rule change, more signage & announcements. This post will take a look at all of that, plus a brief update on guest compliance at Magic Kingdom, Epcot, Animal Kingdom, Hollywood Studios, and Disney Springs.

If you’re looking for info about Disney’s face covering polices, begin with our FAQ & Guide to Face Masks at Walt Disney World. For a seemingly simple topic, there have been a lot of questions, policy tweaks, and more. That’s a fairly comprehensive look at everything you need to know, presented in question and answer format. This is also a topic we touch upon from time to time, as appropriate, in our Walt Disney World photo reports.

However, face masks have come up less frequently because there’s less reader interest. It seems that most Walt Disney World fans have embraced or at least begrudgingly accepted face masks as part of the temporary abnormal Walt Disney World park-going experience, or are staying away until the rule goes away. There’s been far less debate, which is fine by us. We can finally move onto more important debates, like who is the best Country Bear? (False alarm, that’s not actually up for debate at all–it’s Big Al.)

Moving along, there are “new” Christmas masks now available in the parks. Four designs, three of which are awesome. (Sorry, the final one brings me no joy.)

These holiday masks are not totally new, as these have been available on shopDisney since last month. They’ve just now made their way to Walt Disney World, along with the rest of the holiday merchandise. 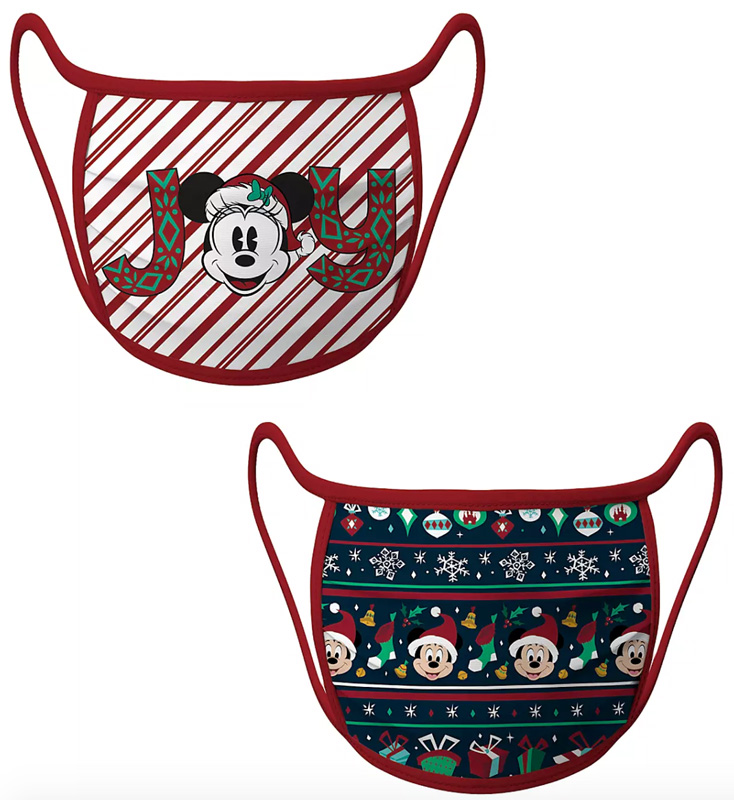 Unlike the first batch of masks released over the summer that were cotton, these are polyester. They definitely feel nicer to the touch and are more breathable. However, it’s worth noting that online reviews are all over the place. Most complain about inconsistent sizing (the widespread belief among reviewers is that these are larger than the earlier designs) or being too thin.

While we’re still very satisfied with the masks we use, they’re a bit boring and we’re also total suckers for Christmas. As such, we’ll probably pick up a couple. 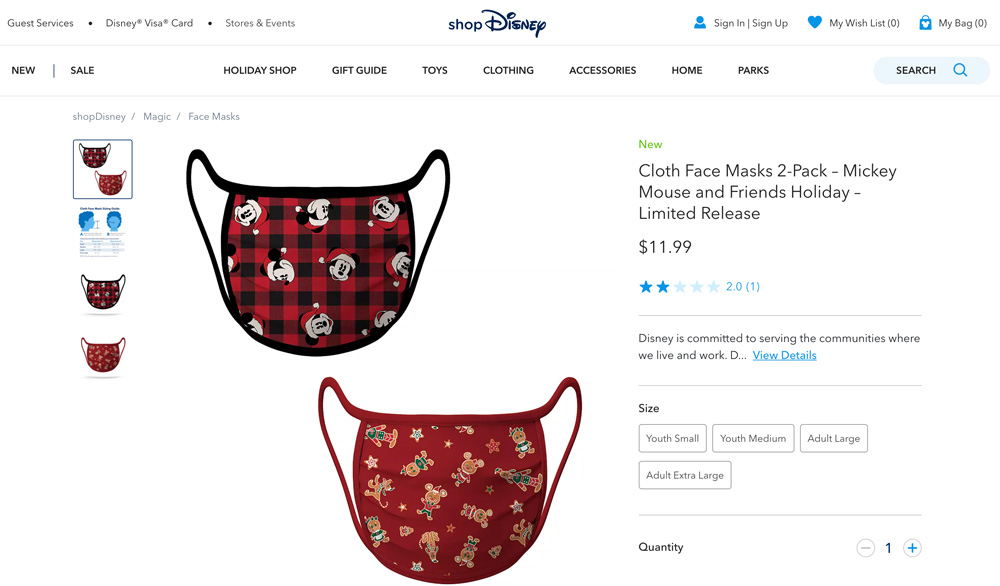 If you do opt to buy them, we’d recommend buying the 2-packs on shopDisney, which are only $11.99.

There are also four packs, albeit not of the holiday designs, for $19.99. 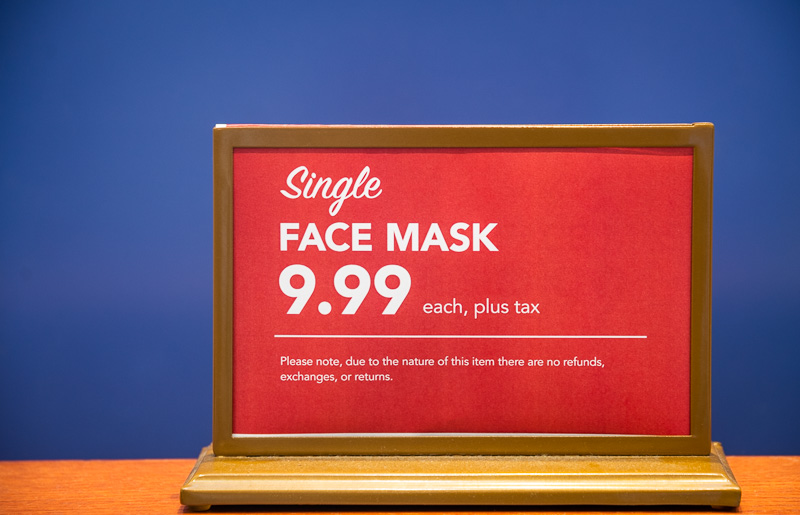 At Walt Disney World, the individual face masks have increased in price. Previously, Disney’s face masks were $6 each or 4 for $20.

Now, the bundle deal is gone and the individual price is $9.99. 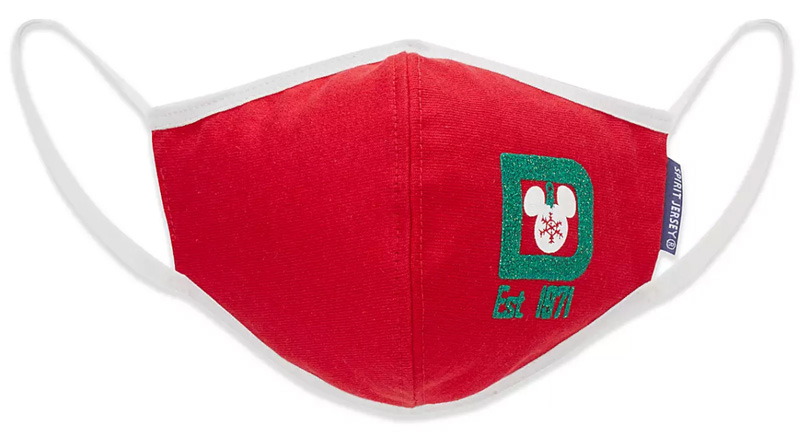 The Spirit Jersey ones are $12.99, which isn’t totally surprising since all Spirit Jerseys have absurd pricing; how they manage to sell so well is one of life’s great mysteries.

While I firmly believe that Spirit Jerseys are overpriced sweatshirt imposters, I can’t say the same about the face masks. 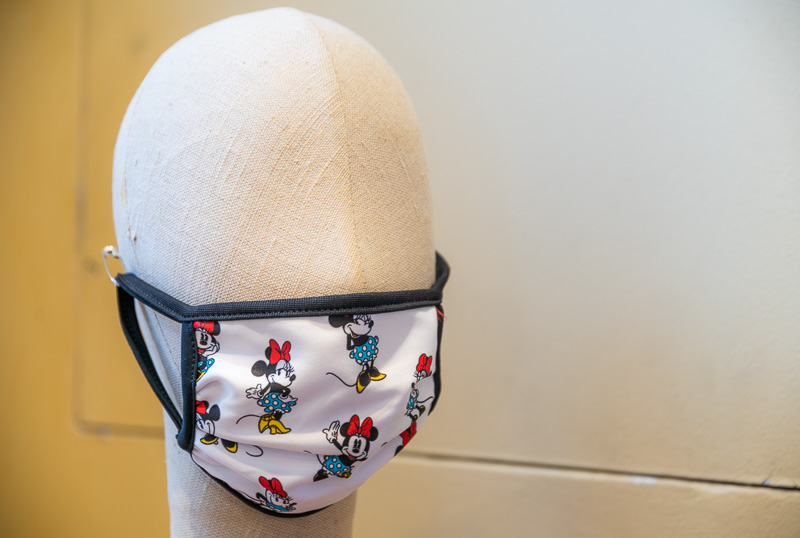 Honestly, I thought the previous pricing was a steal, especially as compared to what we’ve paid for other reusable face masks elsewhere.

This is definitely a big price increase percentage-wise, and there’s some shock value from that perspective. With that said, it doesn’t seem totally out of line to me. If the face masks started at $10 each when the parks reopened this summer, I probably wouldn’t have batted an eye. It’s just the jump that’s attention-grabbing here. Your mileage may vary. 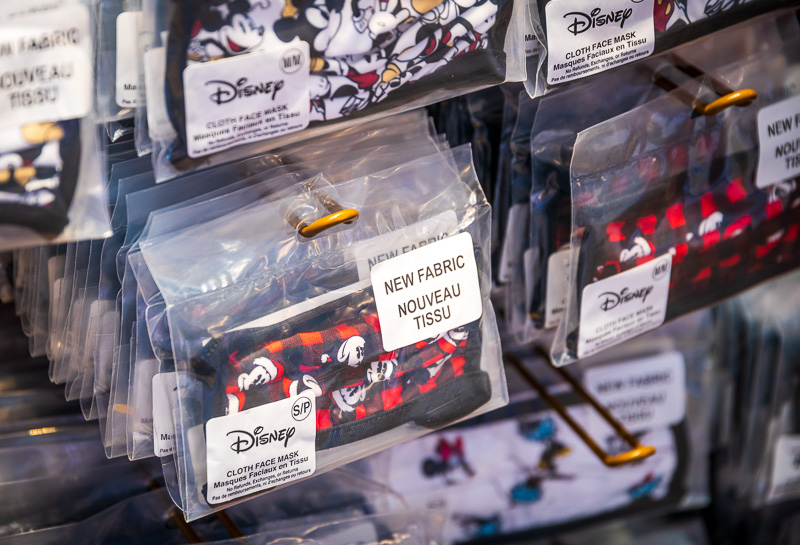 Next up, it’s been almost two months since we posted our previous Walt Disney World Face Mask Compliance Report and part of the reason we haven’t done a follow-up is because not much has changed. As before, our original concern was that face mask rule compliance would dip over time due to fatigue and other factors.

If anything, we’ve noticed increased diligence among Cast Members in actively enforcing the rules and politely reminding guests to pull up their mask, not walk and drink, wear masks while taking photos, etc. For their part, most guests also at least acquiesce with the rules. 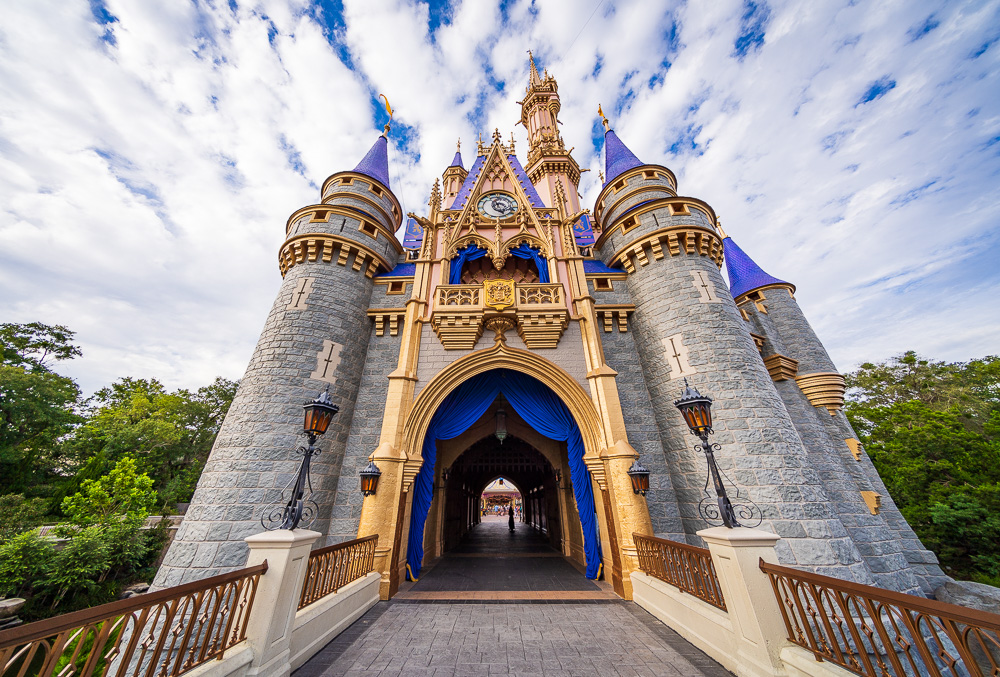 Anyway, face mask compliance remains more or less the same as before. Magic Kingdom is the best park at around 97-98% compliance. We’d peg Animal Kingdom and Disney’s Hollywood Studios as tied for second at around 96%. EPCOT and Disney Springs both average around 95%.

Note that these numbers vary by time of day (mornings are better across the board), area of the park (in front of Cinderella Castle is the worst area of Magic Kingdom), and various other factors. Even at their worst, the theme parks remain significantly better than anywhere else in Central Florida. 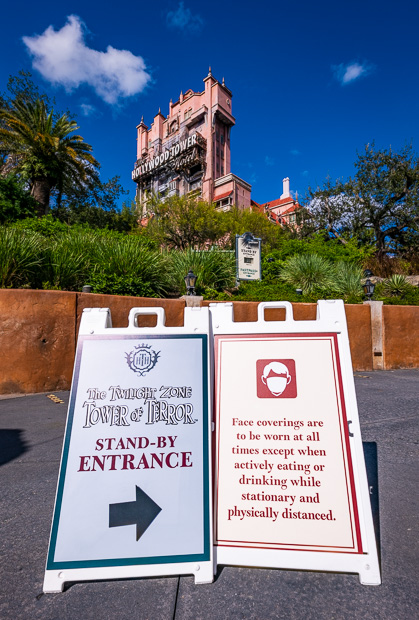 Obviously, our observations of compliance are entirely anecdotal. What you notice or experience might be entirely different, especially if you visit on busier weekends. As crowds increase, mask compliance seems to decrease. This is presumably due to Cast Members being stretched too thin and guest patience wearing thin, among other things.

This is unquestionably most noticeable in World Showcase at EPCOT on evenings, weekends, and especially the double threat of Fridays through Sundays at night. We’ve covered this elsewhere, and it probably shouldn’t be a huge surprise to anyone reading this. Most people visiting EPCOT on weekends during Food & Wine probably know what they’re getting themselves into. 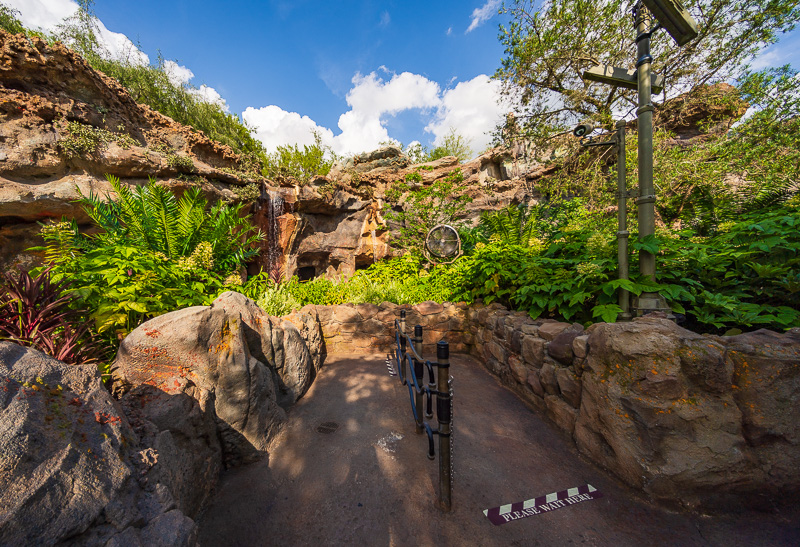 As has been the case since the summer, Walt Disney World continues to evolve its mask messaging, and add new rules as necessary. We heard yet another modification while standing in line for Star Wars: Rise of the Resistance at Disney’s Hollywood Studios.

I’m not sure of the specific verbiage, but it stated that eating and drinking are not allowed while standing in line. This is a new rule, and likely due to guests being too lax with masks while eating or drinking in line. We’ve noticed this several times, and typically just give guests “sipping & strolling” while in line a bit of extra space. That’s not always possible though, particularly when they’re behind us in line. 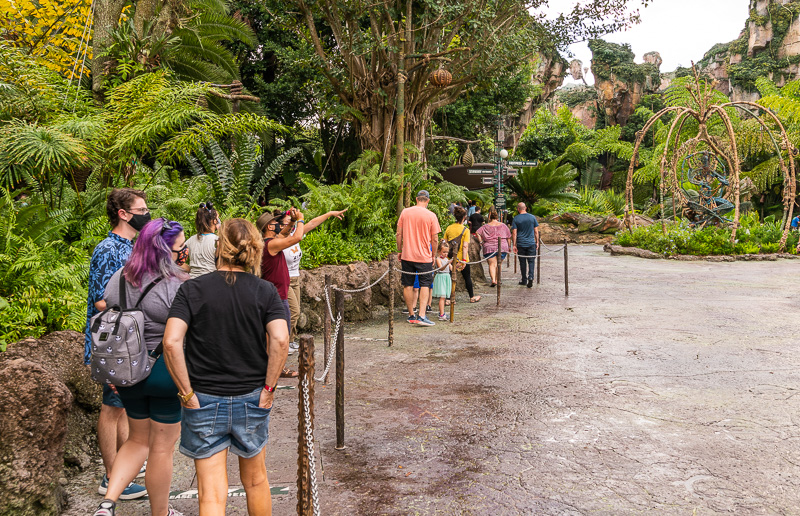 Honestly, I didn’t even hear/notice this rule change announcement–it was all Sarah.

The announcement is literally 30 seconds long at this point, and I’ve heard it enough that my brain just tunes it out (except when it’s a new voice, for some reason). They could throw in some nonsense about Dino-Rama having a brilliant backstory mid-spiel and it probably wouldn’t even catch my attention. 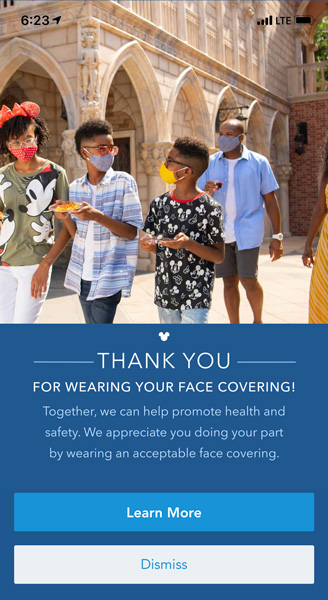 Speaking of announcements, there are also pop-up notifications in My Disney Experience about mask-wearing.

We first mentioned these in passing a couple of weeks ago, assuming it the notice was a one-off. Since then, I’ve received the push notification over a dozen times–occasionally multiple times in the span of an hour. I don’t think that frequency is necessarily deliberate or consistent with others. I also used to receive “do you want to Mobile Order?” push notifications literally every time I walked past the Lunching Pad. 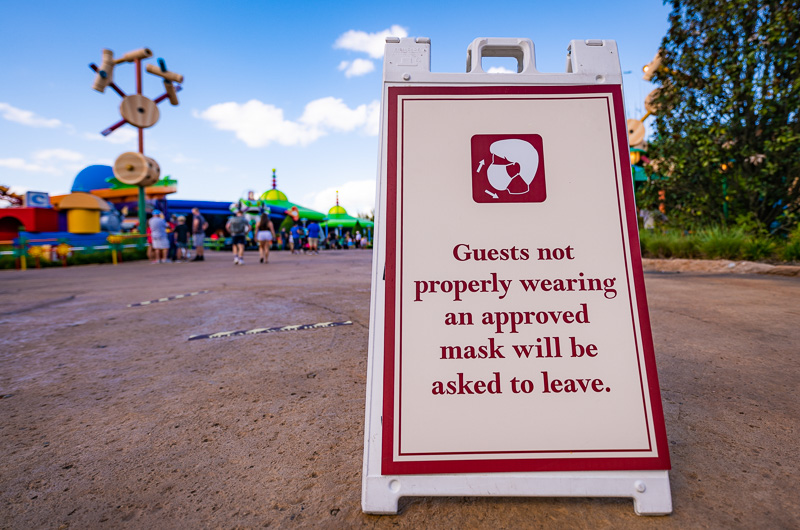 There are also a slew of signs that have recently appeared in the parks.

These include ones indicating that masks must cover the nose and mouth, that guests not properly wearing an approved mask will be asked to leave, and that face coverings are required at all times–including while taking photographs. The last one follows a similar announcement playing around Cinderella Castle, stating the same. 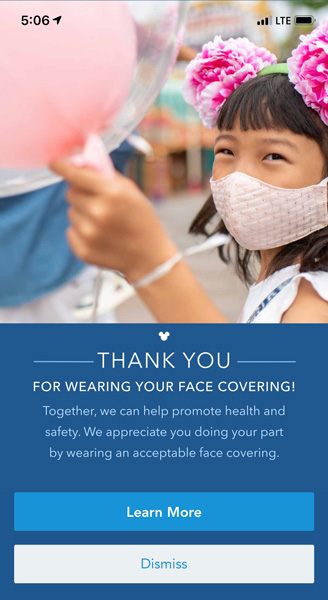 I give huge kudos to Walt Disney World when it comes to face coverings. Both in terms of rule enforcement and adapting to increase compliance. They’ve deftly handled what has become a contentious issue without much in the way of in-park backlash. It’s actually pretty impressive.

Nevertheless, part of me wonders what incremental compliance gains are coming from the ongoing additions to signage, announcements, and so on? After seeing and hearing the same message a dozen times, is the thirteenth time the charm for some people? Or is there a point when only targeted enforcement with Cast Members delivering individual “reminders” to guests breaking the rules going to be effective?

I truly don’t know the answers to those questions, but I pose them because the cumulative weight of this all does impinge upon the guest experience a bit for those who abide by the rules and don’t try to exploit loopholes or test the limits. It’s a given that these are abnormal times and it’s necessary to accept compromises and changes to the guest experience–including the face mask rule.

However, some degree of balance is also necessary. Not in terms of the substance of the rules, but in their presentation. Obviously, Walt Disney World is not going to have its trademark escapism right now (at least, not nearly to the normal degree) but there’s a fine line between firmly presenting and enforcing health safety rules, and getting heavy-handed. That’s especially true when the signs have become so frequent and the announcements so long that they’re potentially ineffective because many people just tune them out anyway.

This is undoubtedly a tough needle to thread and Walt Disney World is in a tough position; I’m just not entirely convinced that another sentence to the in-park spiel and two dozen new sandwich boards each week is an effective answer. With that said, the Incredi-Crew Cast Members have been doing a phenomenal job addressing rule-breaking guests, and that one-on-one approach appears to be highly successful in correcting noncompliant behavior.

What are your thoughts on the face mask price increase? Are they still reasonable even after the jump, or too much? Thoughts on the length of the announcement or increasing number of sandwich board signs in the parks? If you’ve visited the parks since Walt Disney World reopened, what was your experience wearing masks? Observations on compliance? Do you agree or disagree with any of our assessment? Please keep the comments civil. This is not the place for arguing about efficacy, politics, and so forth—all such comments will be deleted, irrespective of perspective. You are not going to change anyone’s mind via the comments section on this blog, nor are you going to change Disney’s policy.