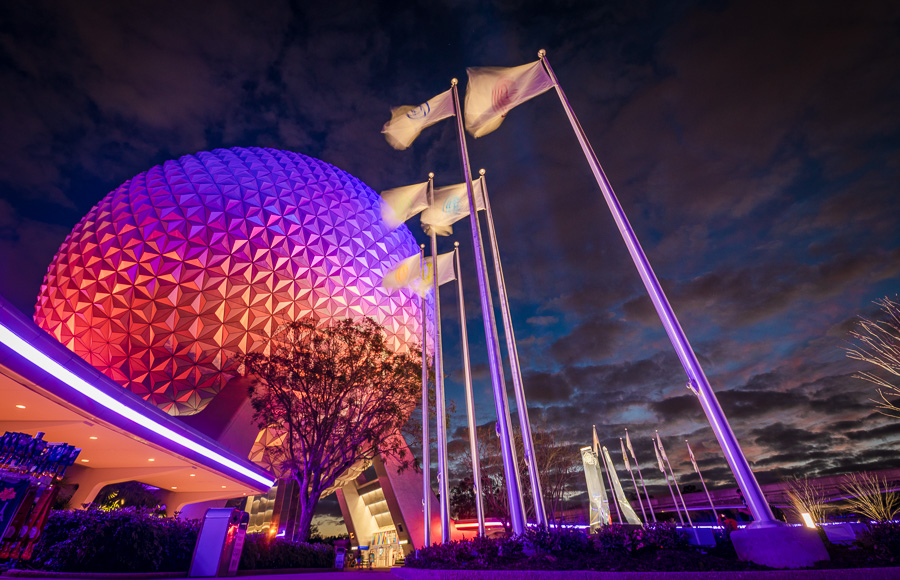 Let’s start with an update on new and extended park hours as Walt Disney World’s spring break season starts winding down. All four theme parks, Disney Springs, and Blizzard Beach have had hours for another week added to the DisneyWorld.com park hours calendar. These now extend to June 12, 2021. Hours are the same for all dates from April 18 to June 12, with the exception of DHS:

Note that beginning on May 23, 2021, Disney’s Hollywood Studios begins opening at 9 am daily instead of 10 am. Park Hopping times for those and all dates remain from 2 pm until park close. We have yet to encounter any issues with or restrictions on Park Hopping, even on busy days. As usual, there are also extensions to hours for select dates at specific parks…

From April 11 to 17, 2021 all four parks at Walt Disney World have received significant extensions:

As a reminder, Walt Disney World releases new boilerplate hours and extends hours in one week increments (this usually happens on Friday). Meaning that placeholder hours for June 13-19, 2021 and final hours for April 18-24, 2021 will be released next weekend. The boilerplate/placeholder hours are exactly what the name suggests, and are absolutely meaningless. 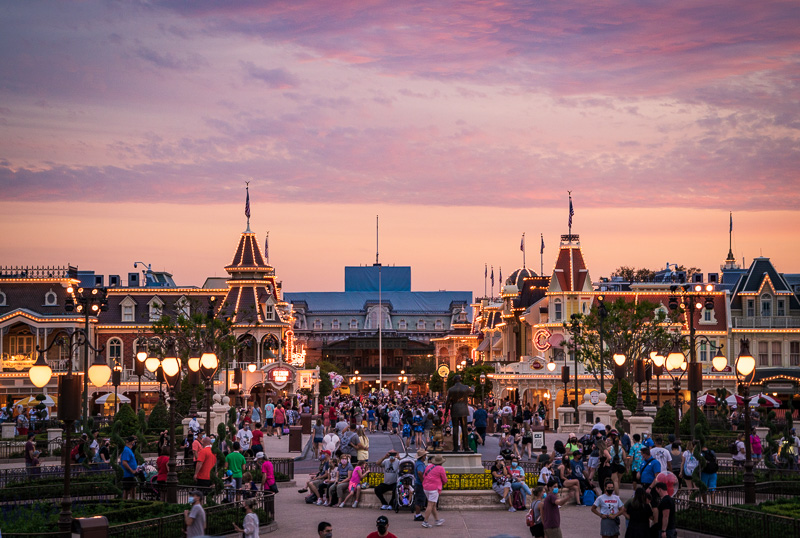 These are significant extensions that are on par with peak spring break dates and the week after Easter. That’s interesting, because we originally expected crowds to die down a bit starting April 12. In a normal year, this would be when those heavy crowds would wind down, and attendance would return to “only” above-average levels until the start of summer.

Either Walt Disney World is not forecasting that, or they’re simply erring on the side of caution and extending on the basis of current attendance. My guess is the former. It’s entirely possible that we’re seeing pent-up travel demand starting to play out in earnest, and elevated attendance is here to stay until whenever that’s exhausted. 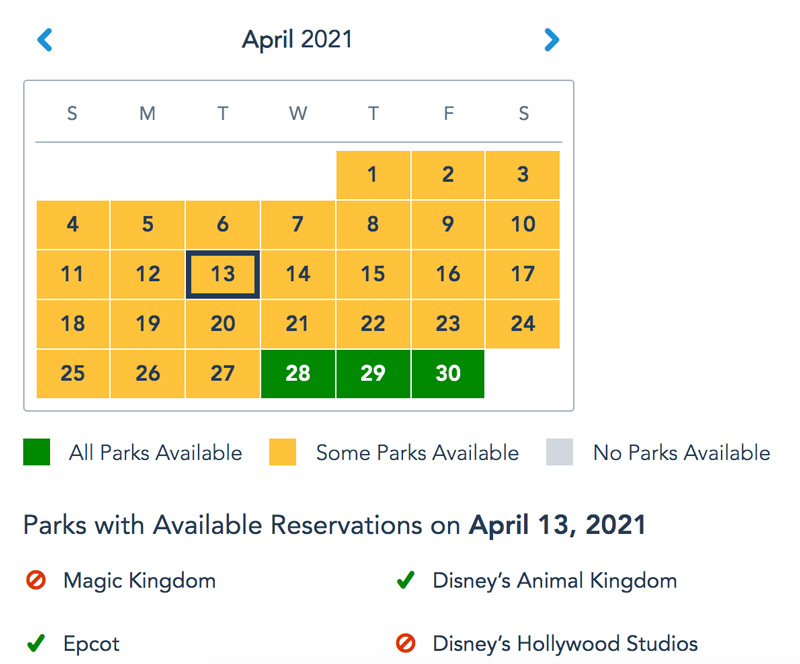 Walt Disney World has plenty of data to project attendance with complete accuracy thanks to park reservations and hotel bookings, among other things, so they wouldn’t extend hours to this degree for no reason. Speaking of which, Disney Park Pass reservations were totally unavailable through April 11 for resort guests and theme park ticket holders as of earlier this week.

Those have since been refilled, and there is now daily availability for April in at least EPCOT and sometimes also Animal Kingdom. Both groups still cannot book Magic Kingdom until April 14, 2021 at the earliest. In an interesting turn of events, Annual Passholders can book Magic Kingdom (or most parks) today and almost every day thereafter. 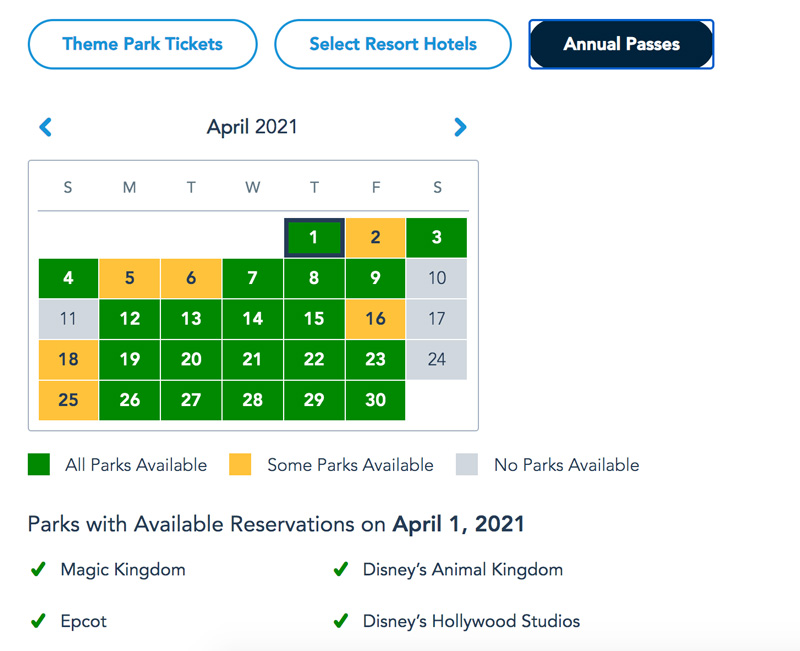 As we said a couple of weeks ago, our guess is that this is not deliberate. It’s likely an unintentional byproduct of Walt Disney World changing the inventory allocation percentages last fall after Annual Passholders were regularly getting shut out and the other two buckets had totally green calendars.

It’s actually a bit surprising to us that Walt Disney World hasn’t revised those distributions in the weeks since, or at least temporarily reallocated some inventory from the AP bucket to the resort guests one. It’s rare and odd to see on-site Disney hotel guests at a disadvantage compared to Annual Passholders. It benefits us, so we’re not complaining too loudly here, but it doesn’t seem right. 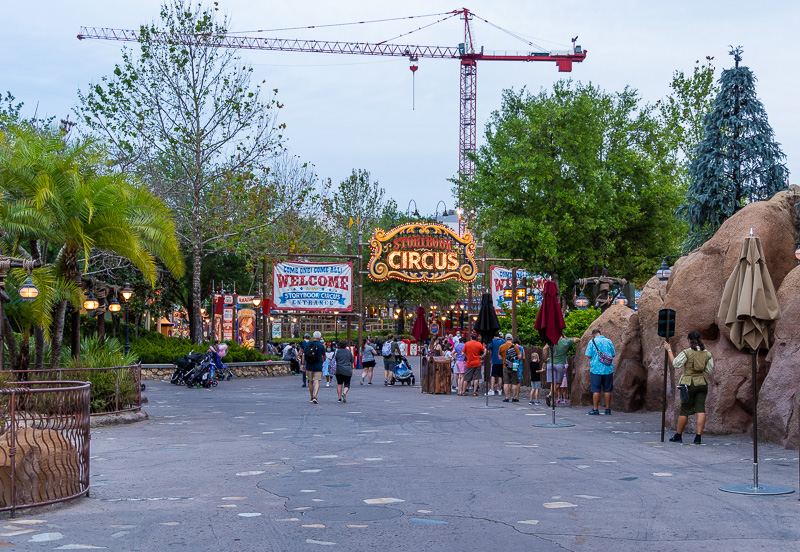 As for the latest refill to Disney Park Pass inventory for the next couple of weeks, this seems appropriate to us. Some of you who are visiting then might be worried that it means the parks will be crowded and Walt Disney World is exceeding its self-imposed 35% park attendance cap. That’s certainly possible, but there have been a number of times when Disney has deliberately withheld Park Pass inventory and released it later.

In visiting Magic Kingdom and EPCOT this week and looking at data, our guess is that’s what happened here. While some wait times are on the longer side, they are not peak day long. Crowds are definitely elevated, especially as compared to the glorious off-season months of January and February, but it’s still nothing at all like Thanksgiving, Christmas, or even Mardi Gras. To the contrary, many queues are shorter and lines are moving faster since more ride vehicles are being filled on some attractions.

Current crowds are low by historical spring break standards, high as compared to the last couple of months, but about average by post-reopening standards on balance. All things considered, not bad at all. 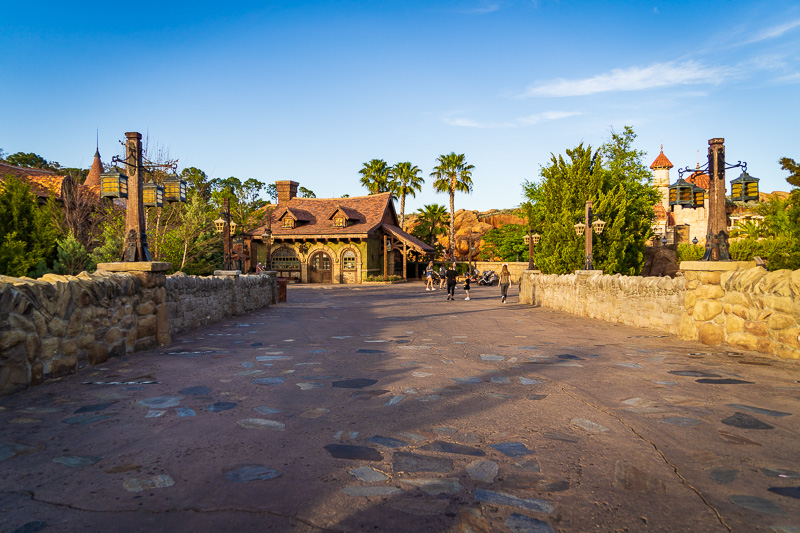 It’s entirely possible that Walt Disney World deliberately limited park capacity at a lower level than normal knowing Florida would be under a media microscope during spring break. Disney is an easy and high profile target, and would’ve made waves on the news if attendance was deemed “too high.”

This is borne out by reopening weekend last July, which garnered a ton of coverage despite the lowest attendance I’ve ever seen, obsessive health safety protocol, and Disney’s parks opening over a month after other Central Florida parks (to crickets). 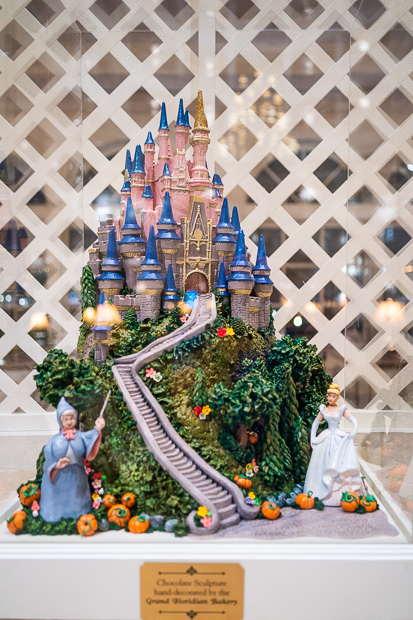 Disney is probably breathing a sigh of relief, as Miami Beach has instead garnered the unfavorable coverage. Obviously, what’s happening there is not ideal, especially given the practical reality that spring break also typically has a significant indoor component. Still, it’s a bit disingenuous for videos of almost every large outdoor event to make huge waves in the news with breathless warnings of a “potential super spreader event” and then zero follow-up.

It happened with the Super Bowl in Tampa, despite no subsequent spike. It happened when UNC beat Duke, and student testing conclusively disproved that. It has happened countless times before both. We now know so much more about the nature of transmission than a year ago when vilifying beaches was all the rage, yet this narrative about outdoor events as “potential super spreader events” persists despite nothing to support it. By that standard, unicorns pose a present threat to my safety when I’m hiking in enchanted forests. But I digress. 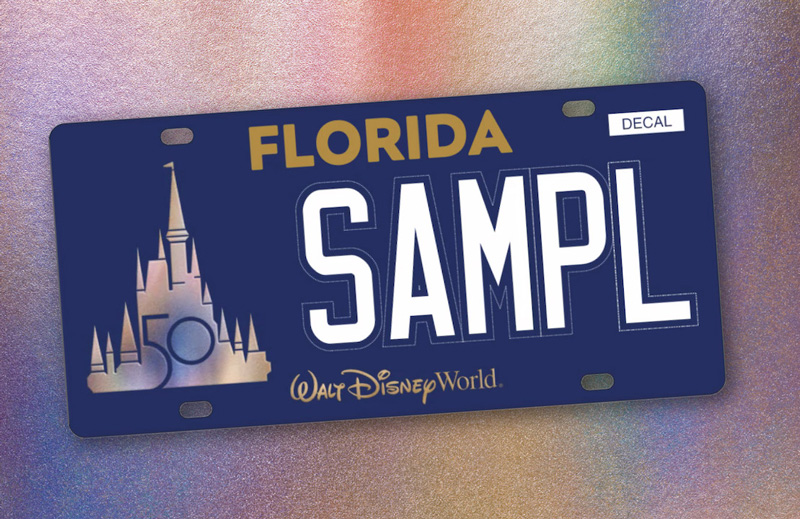 In other news, Walt Disney World has unveiled the design for Florida’s first-ever Walt Disney World specialty license plate! This design features the “EARidescent” 50th anniversary Cinderella Castle logo on a royal blue background with the Walt Disney World logo below. This plate is currently available for presale all of the proceeds will benefit Make-A-Wish.

Floridian drivers can purchase a presale voucher now for $25 plus applicable state administration fees exclusively through the County Tax Collector’s Office, DMVs across the State of Florida, or online through the Orange County Tax Collector’s Office. A minimum of 3,000 presale vouchers are required to be sold by the State of Florida before manufacturing of specialty license plates may begin.

Given the number of diehard Walt Disney World fans in the state, they should have no troubles hitting that number. Personally, I prefer the Save the Manatees or Protect the Panther plates, both of which benefit wildlife conservation for those species. 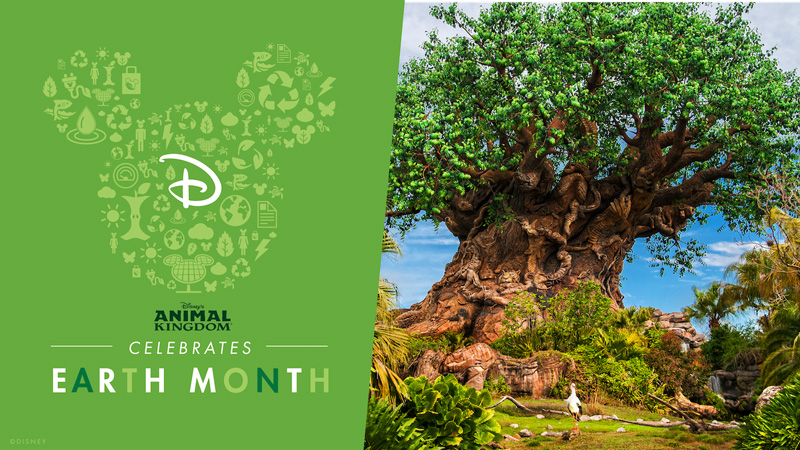 There’s also other merchandise and normal things being pitched as Earth Day offerings. Additionally, Animal Kingdom recently welcomed Ranger, a rambunctious five-month-old white rhino calf, who can be seen aboard Kilimanjaro Safaris. While on safari, also keep an eye out for two young Masai giraffe who were born a few months ago, and playful Nigerian dwarf goats that hang out at the warden’s outpost. 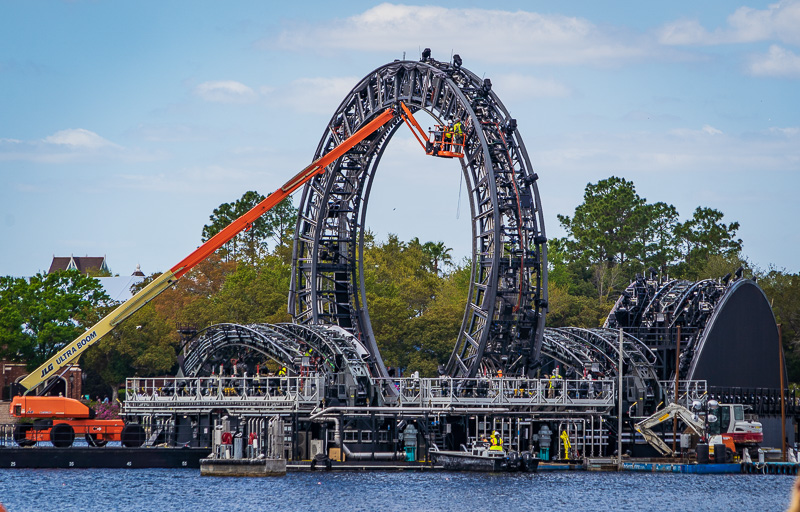 Finally, the third Harmonious barge has arrived on World Showcase Lagoon and testing continues of the lighting systems, Stargate arms, and fountains. It’s still early and we’re hoping the jets still have a lot of refining to do, but so far the fountain tests have not instilled a lot of confidence in terms of how well they’ll conceal the barges during daytime hours.

Still no word on an debut date for the nighttime spectacular. Given everything else, we’re beginning to think Walt Disney World will hold it back until at least October 1, 2021 with Epcot Forever potentially returning before then if overall Walt Disney World visitation justifies it–but EPCOT needs an attendance boost. In Harmonious at EPCOT: Info & Timeline for Walt Disney World’s New Fireworks we cover everything else you might want to know about this upcoming production.

What do you think of this Walt Disney World news? Thoughts on the Disney Park Pass availability for resort guests v. APs? Why reservations were refilled after being fully booked? Will you be preordering the 50th Anniversary license plate? Participating in the Earth Day festivities? Do you agree or disagree with our assessments? Any questions we can help you answer? Hearing your feedback—even when you disagree with us—is both interesting to us and helpful to other readers, so please share your thoughts below in the comments!