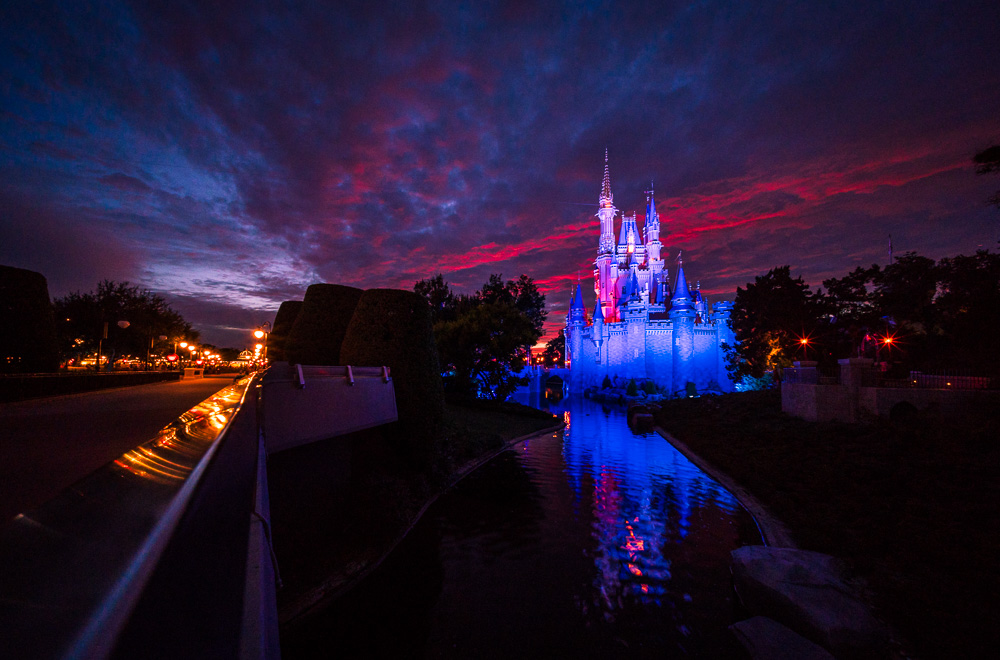 We’re back with another Walt Disney World news round-up! As usual, this one covers a range of topics, including the Walt Disney Company’s 2020 financial results webcast, more restaurants returning in the parks, Frozen Ever After’s upcoming downtime, progress on the Star Wars hotel, Park Pass availability, and more. Before getting started, we want to thank everyone for the outpouring of support in response to our Help Give Back to Disney Cast Members & Community initiative.

Many of you have contributed, either via monetary donations or in spreading awareness, and we are incredibly humbled and heartened by that. Our fundraiser has now eclipsed over $50,000 for Second Harvest Food Bank of Central Florida, making it the largest virtual food drive in the history of the organization. As some of you have noticed and shared in the comments to the original story, the fundraiser was picked up by some media outlets. That was great for helping shine a spotlight on a great cause, albeit mildly unnerving for us as introverts.

We want to reiterate how grateful we are to all of you for your generous support, more of which is still desperately needed as the Orlando area reels from economic devastation. This fundraiser doesn’t make the news of Walt Disney World Cast Member and other layoffs any less heartbreaking, but hopefully it shows those who have made the magic just how important they are to all of us, and plays a small role in starting to make things better.

In our last Walt Disney World news & rumor roundup, we shared additional thoughts on the layoff of 28,00 Cast Members in Florida and California. We noted there that we do not plan on offering analysis or commentary about the specific divisions and areas of these job losses; along those lines, we are not going to be reporting on unconfirmed reports or rumors of layoffs.

It’s one thing to miss the mark with a rumor when it comes to a replacement for Stitch’s Great Escape, overdue update to Journey into Imagination, or the perpetually ‘almost greenlit’ Brazil pavilion. It’s another entirely to get things wrong when it comes to careers, futures, financial wellbeing, etc. We kindly request you refrain from spreading such rumors or speculation in the comments, as well. Just because someone is a high-profile Imagineer or something of that sort doesn’t make them fair game. 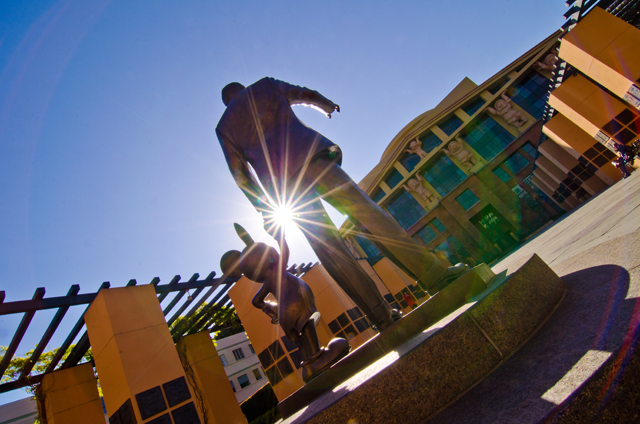 On a related note, the Walt Disney Company will release its fourth quarter results for the last fiscal year after the close of regular trading on November 12, 2020. Thereafter, Disney executive leadership will discuss 2020 financials via a live audio webcast beginning at 4:30 pm EST on this page.

We will once again be listening and offering our analysis that evening on the blog after the webcast concludes. While this is not the type of event that usually results in specific or tangible theme park announcements, it does provide high-level insight into the health and trajectory of Walt Disney World, Disneyland, etc., which in turn guides specific decisions. Given the unprecedented nature of the last six-plus months and the significance of the new fiscal year, this webcast should over important forward-looking insights. 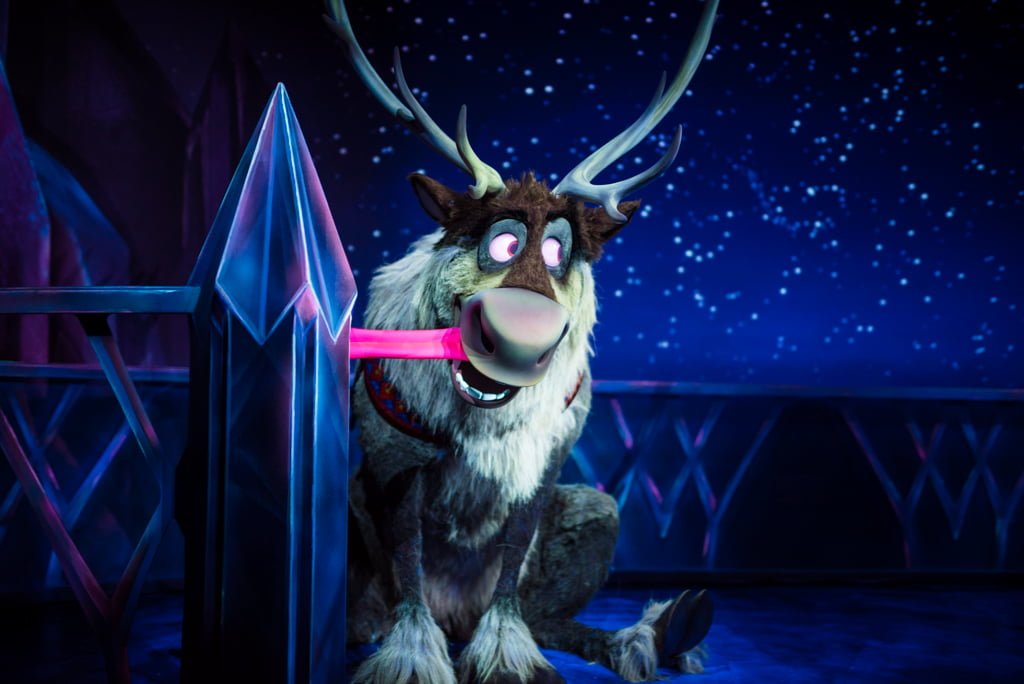 Now a 5-day closure of Frozen Ever After has been added to the downtime list. EPCOT’s popular boat ride will go down November 2-6, 2020 and will reopen on November 7, 2020. No word on what the project entails, but judging by the duration, it’s for routine maintenance. 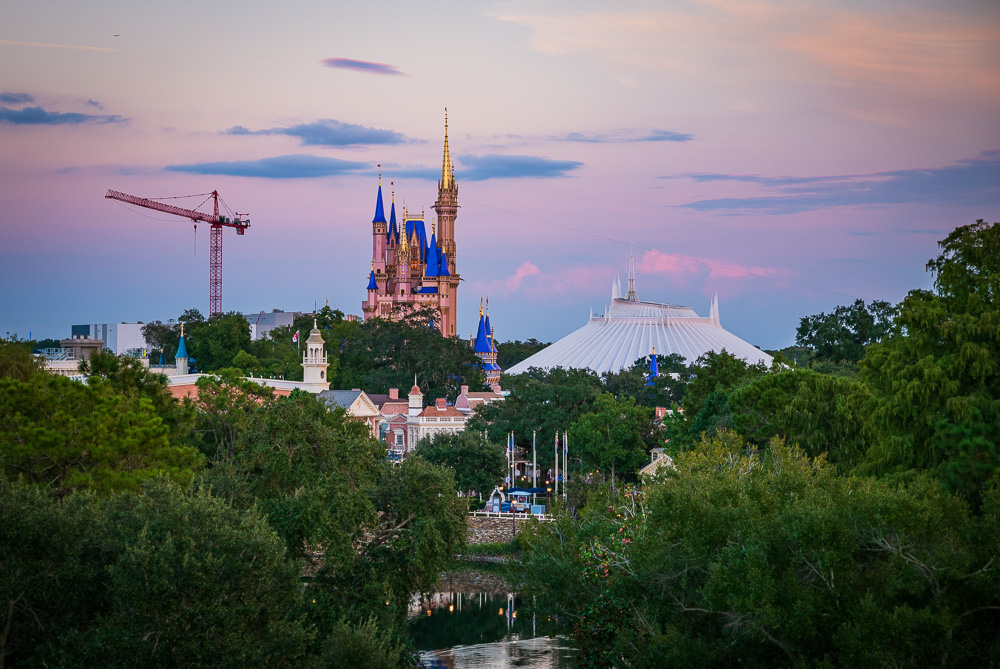 Larger scale construction projects have also resumed and accelerated the pace of their work. We’ve been providing updates on the renovation/gutting of Electric Umbrella & MouseGear, new roof on the future Play Pavilion, and the canopy progress on Tron Lightcycle Run.

In addition to those visible in-park projects, work can be observed continuing on both the Walt Disney World Swan Reserve Hotel Tower in the Crescent Lake area and Star Wars Galactic Starcruiser Resort behind Disney’s Hollywood Studios. A new permit filed by Walt Disney Imagineering indicates that work inside the upcoming Star Wars hotel is also progressing. 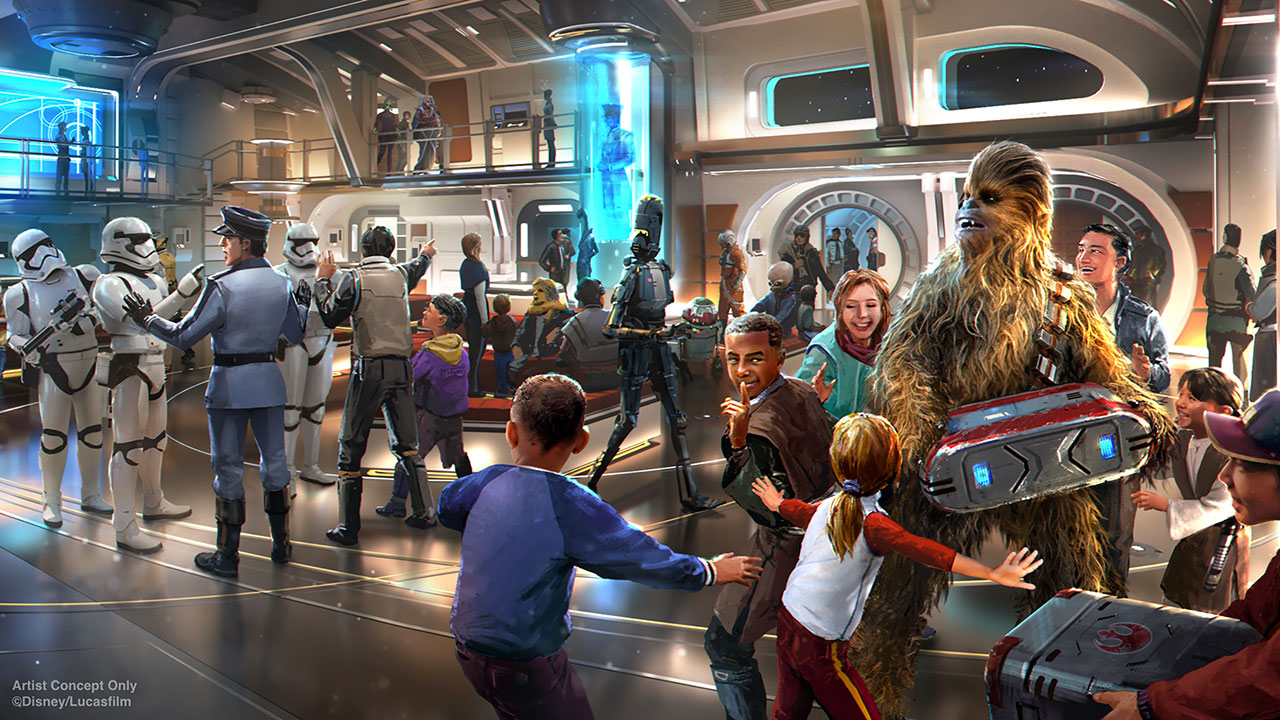 This new Star Wars: Galactic Starcruiser Resort permit is for “set items” and InterAmerica Stage, Inc. as the contractor. That company is “established leader in the entertainment industry” with a focus on overhead rigging, specialized stage machinery, structural design, and engineering. Their portfolio includes a lot of theater work, and they’ve collaborated with SeaWorld, Universal, Legoland, and others in the past.

As you might recall, Walt Disney Company’s CFO Christine McCarthy specifically addressed the Star Wars: Galactic Starcruiser Resort at a conference last month. She indicated that this was one of a handful of theme park projects that are already underway that will be prioritized going forward. As we state in our post covering Everything You Need to Know About Star Wars: Galactic Starcruiser Resort, we still expect changes to the nature of the experience between what was announced and what opens. 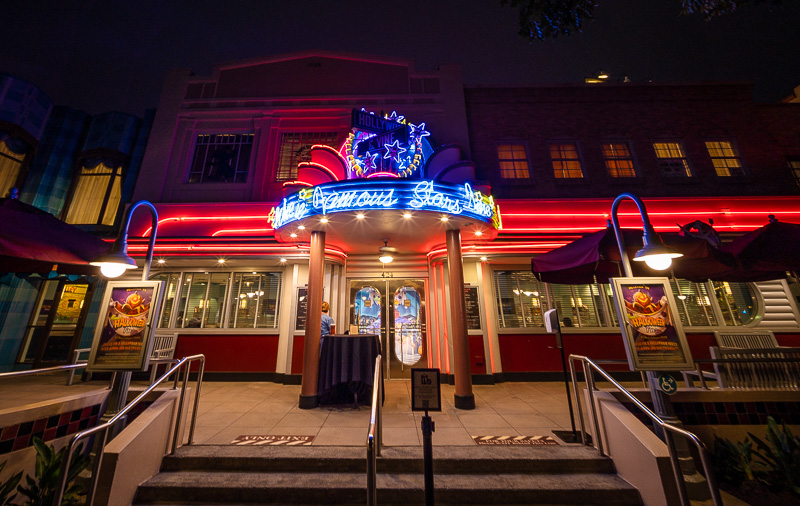 Next, there have been a lot of restaurant updates in the last few weeks. You’re probably already aware that Minnie’s Halloween Dine has returned, Chef Mickey’s is getting a new menu and bringing back characters for Christmas, and Chefs de France reopens this week.

However, a bunch of smaller-scale additions have also occurred. Magic Kingdom’s Adventureland Spring Roll Cart returned last weekend, Via Napoli’s counter service window resumed operations, as did the Friar’s Nook, among several other locations. Many of these will only be open as dictated by demand. For October, that likely means weekends only. 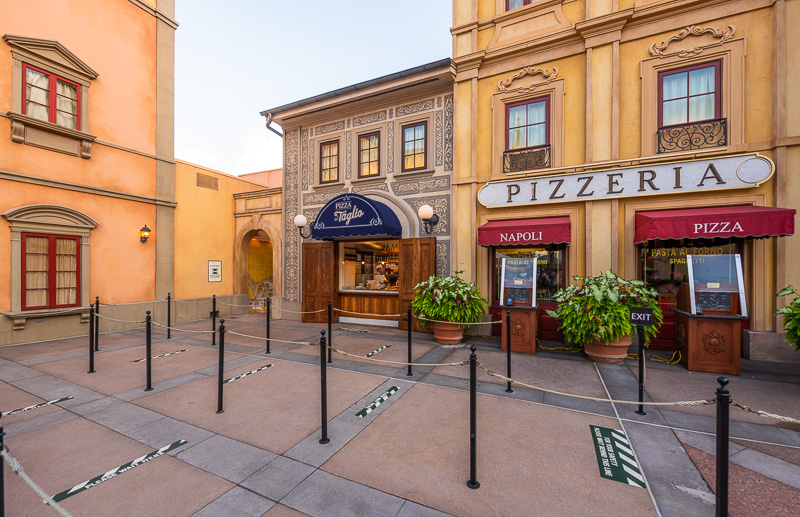 What we really need to do is update our List of Reopening & Closed In-Park Restaurants at Walt Disney World to include all of the little snack stands, kiosks, etc. We know it’s difficult to keep track of all the changes–so that’s on my agenda for later today.

Also on the restaurant changes front, there are now more options for Mobile Order to Go. This started with Sanaa (review coming soon!) and has since been expanded to Kona Cafe at Disney’s Polynesian Village Resort and is coming soon to the Wave of American Flavors at Disney’s Contemporary Resort. This is a really great addition that helps expand dining capacity at a time when it’s really needed. 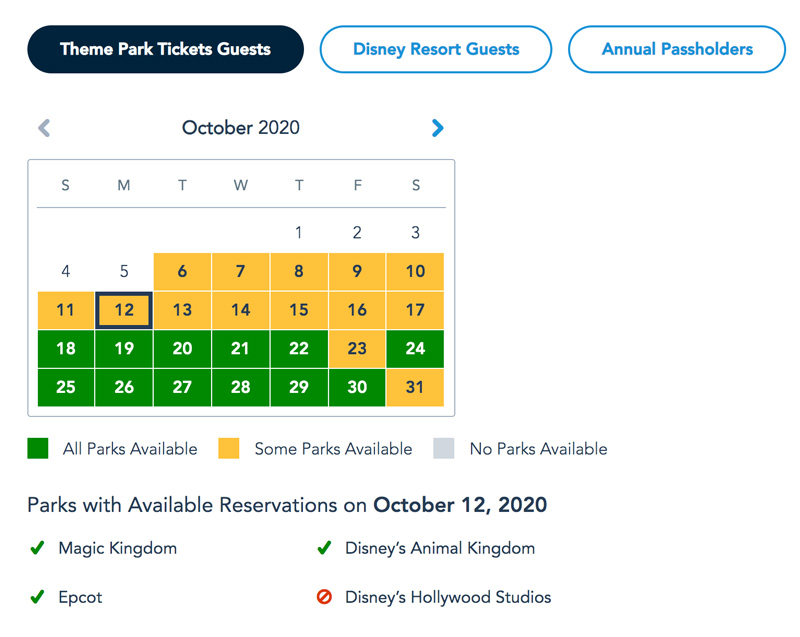 Next, our latest check on Disney Park Pass availability.

There’s a predictable near-term dearth of reservations for Columbus Day/Indigenous Peoples’ Day holiday weekend (October 9-12, 2020) and the week thereafter, although there are oddly more options for APs than the other buckets on some dates. However, we want to focus a bit further out… 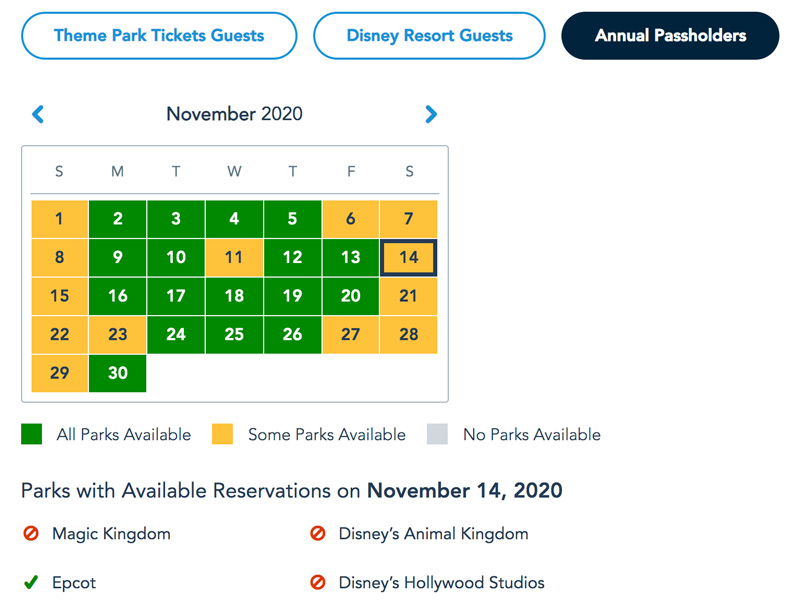 For Annual Passholders, weekends in November are already filling up and the same is also starting to happen for early December 2020. This isn’t just Disney’s Hollywood Studios, either–it’s every park except EPCOT.

If you’re a local AP, it’s an objectively bad idea to book reservations that far into the future unless you have a specific reason for doing so or a certain must-visit date. Upon quickly glancing at the calendar, you might disagree with us, thinking it’s “necessary” to book weekends far in advance given the shortage of near-term options. 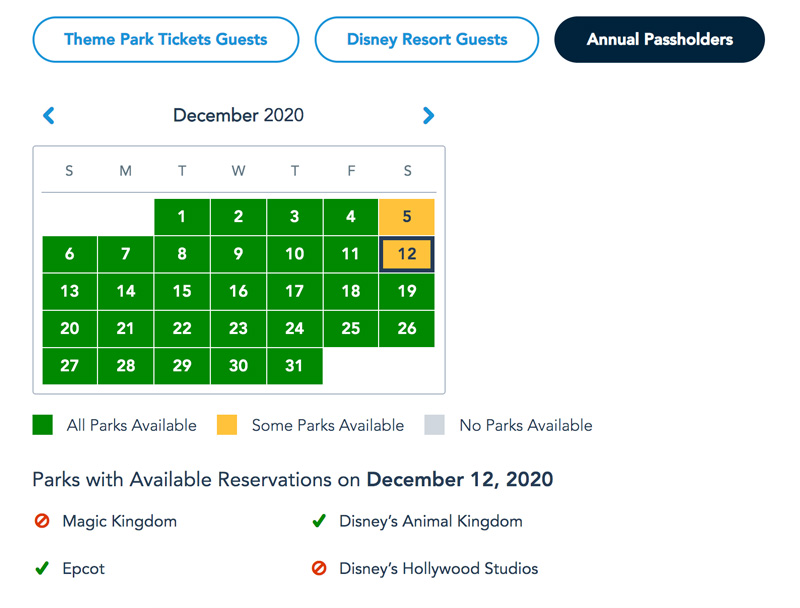 However, this overlooks the reality that the bucket of reservations for Annual Passholders is regularly refilled for dates in the immediate or near future. For example, last Thursday night or Friday morning you could’ve booked reservations for that weekend, but not one 4 weeks later. The same scenario has played out time and time again, to the point that it’s a clear pattern.

Ultimately, some Annual Passholders locking in their allotment of visit dates far in advance (and thus not competing for closer dates) benefits everyone else. So we are thankful for those individuals. However, if you’re reading this blog our goal is to offer advice to help you “beat” the masses, and this falls within that purview. Unless something changes dramatically (always a possibility in these uncertain, ever-changing times), the much better approach right now is making reservations for closer dates, having a strong refresh game, and checking the availability calendar–especially on Thursday evening and Friday morning.

We’ll close with a quick site update. Several readers who haven’t recently received our free email newsletter have contacted us, wondering if we stopped doing the newsletter. (No, the last one went out yesterday.) Upon closer inspection, I found that the vast majority of these were readers with yahoo or hotmail email addresses, and this is a known problem with their mail filtering. We also frequently purge the list of inactive members, so it’s also possible you were unsubscribed. There’s nothing we can do about either of these issues, but you can subscribe again here.

What are your thoughts on the latest Walt Disney World news? Disappointed that upcoming refurbishments might impact your trip, or think that’s probably for the best? Happy to see more Disney Park Pass options for Annual Passholders? Thoughts on the decision to plow forward with Star Wars: Galactic Starcruiser Resort? Do you agree or disagree with our advice and commentary? Any questions we can help you answer? Hearing your feedback–even when you disagree with us–is both interesting to us and helpful to other readers, so please share your thoughts below in the comments!