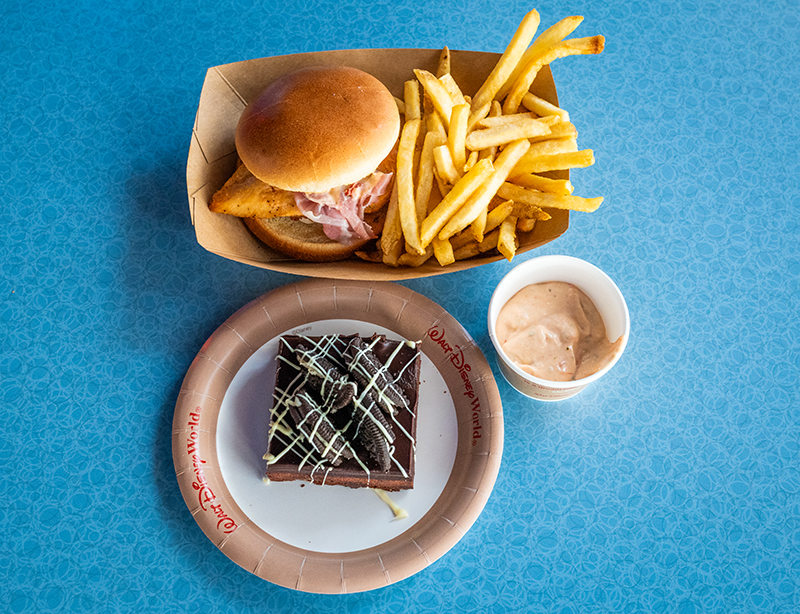 There are a lot of “storylines” in Walt Disney World dining that were established years ago and persist today despite being questionable, at best, and downright untrue, at worst. The greatness of Le Cellier and ‘Ohana. The difficulty of scoring ADRs for Cinderella’s Royal Table. How the Disney Dining Plan has ruined the ambitiousness of menus.

One we are guilty of perpetuating is the terribleness of Electric Umbrella. For years, we made it the butt of jokes. In our defense, it’s an easy target. Also, we have teased more recently that it’s not as bad as it once was. Well, today is the day for a full defense of Electric Umbrella, as a couple of new menu items have reinforced its upward trajectory and further convinced us that it’s getting an undeserved bum rap.

Before this goes off the rails as a redemption story, we want to be very clear that this is still Electric Umbrella we’re talking about. It’s not suddenly the champion of Walt Disney World counter service restaurants, nor is it “good” in the traditional sense of the word. However, in the landscape of Epcot’s dining scene, Electric Umbrella’s stock is rising.

Admittedly, part of this is due to Sunshine Seasons’ stock falling. In fact, our last couple of times at Sunshine Seasons have been huge disappointments, and that’s not counting the instances we’ve walked in and immediately left because an ordering bay or two was inexplicably closed. (Something that is, sadly, happening more and more there.)

Sunshine Seasons has tweaked its menu a couple of times in the last several months, and by “tweak” we mean “eliminate several ambitious items and replace them with fewer things, and items that are of lesser quality.” The bland BBQ sandwich and “Almost Pizza” deep dish are the worst offenders, and some of the worst entrees I’ve ever had at Walt Disney World. 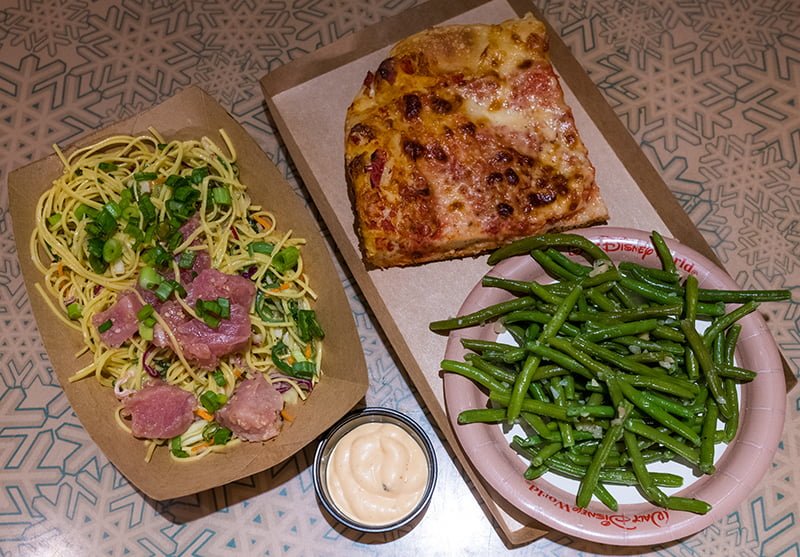 Let’s start by taking a look at the two newest items to the menu at Electric Umbrella, both of which debuted this week… 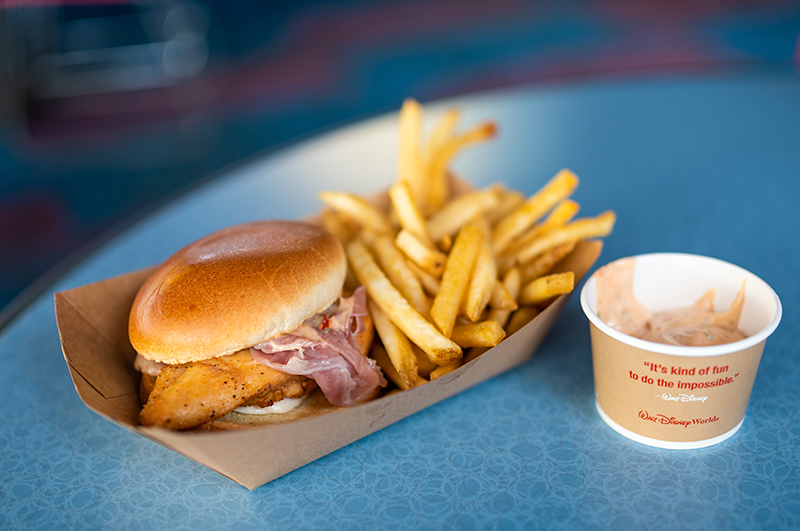 This is the Chicken Prosciutto Mozzarella Sandwich topped with a sun-dried tomato aioli sauce and served with fries.

The chicken on this sandwich is tender and flavorful, and doesn’t taste overcooked or like it’s been sitting around under a heat lamp all day. I could do without the prosciutto, which doesn’t add any flavor to speak of, but does add an odd texture.

The mozzarella provides a bit of depth and flavor to enhance the chicken, but could probably do a tad more. It’s the creamy aioli that ends up being the highlight, enhancing the other flavors while never being too heavy. 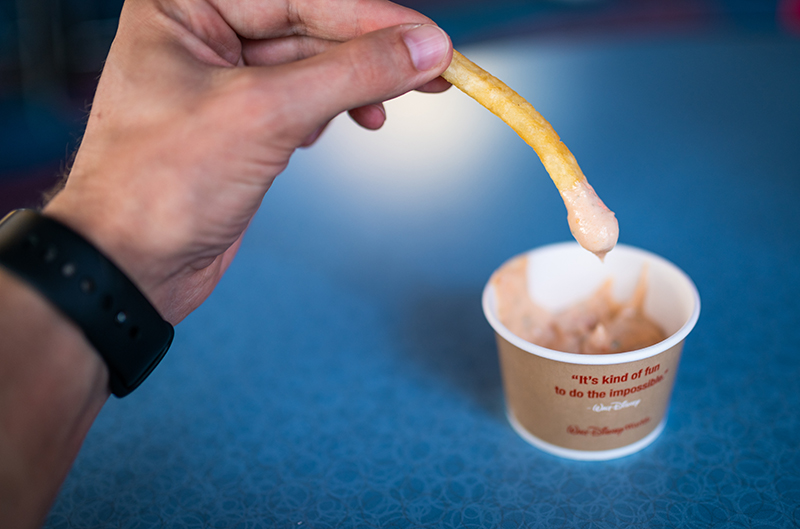 As we frequently do at Sunshine Seasons, our ‘hack’ here is to request a side contained for the aioli, which is perfect for dipping the fries. They gave us a huge container of the stuff.

In the famous words of Walt Disney, “it’s kind of fun to do the impossible…and dip your fries into a soup bowl of aioli.” Walt dreamed of a place kids and parents could have fun dipping fries together, and it’s nice to see Electric Umbrella is finally realizing his dream.

Overall, this is a good-but-not-great sandwich that comes across as “healthy enough” while still having the kind of indulgent flavors I enjoy in theme park food. I’d recommend it, but it’s not my favorite item on the menu. 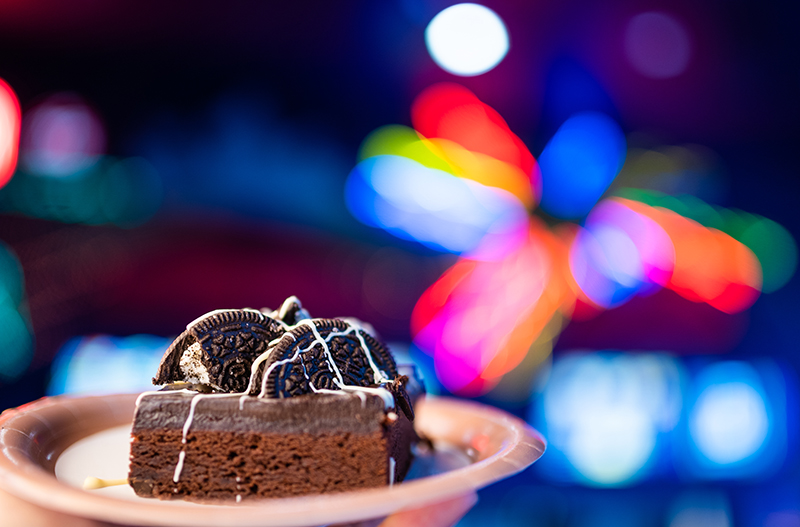 The second new item is the Cookie Crunch Brownie.

Normally, Walt Disney World brownies are one-note, hard, and dry. This was a different story, with discernible layers and a variety of textures. It’s dense and perhaps a bit too rich, but we enjoyed the dessert. It still would be pretty far from our top choice of desserts in Epcot (Sunshine Seasons still shines in that regard, as do the World Showcase bakeries), but it was better than expected. 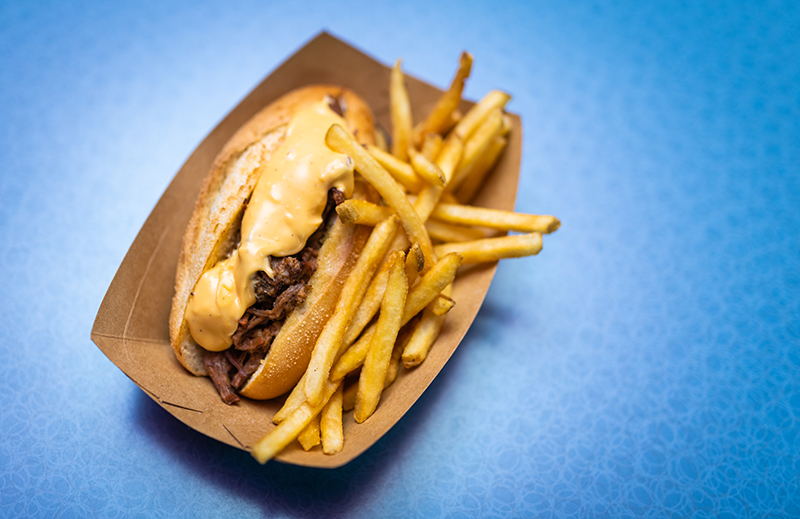 My favorite item on the Electric Umbrella menu is currently the Brisket Sandwich: “Slow-cooked Smoked Beef Brisket Marinated in Au Jus on top a Toasted Roll covered with Homemade Beer Cheese and served with French Fries.”

This is pure guilty pleasure territory, but I feel it’s not totally phoned in with cheap meat and plastic cheese. Instead, you get juicy (albeit sometimes overly-fatty) brisket, a quality roll that can hold up under the weight of the meat and au jus sauce, and nice beer cheese. It’s not the pinnacle of Walt Disney World’s culinary scene, but it’s delicious and more effort is put into it than you’d expect. 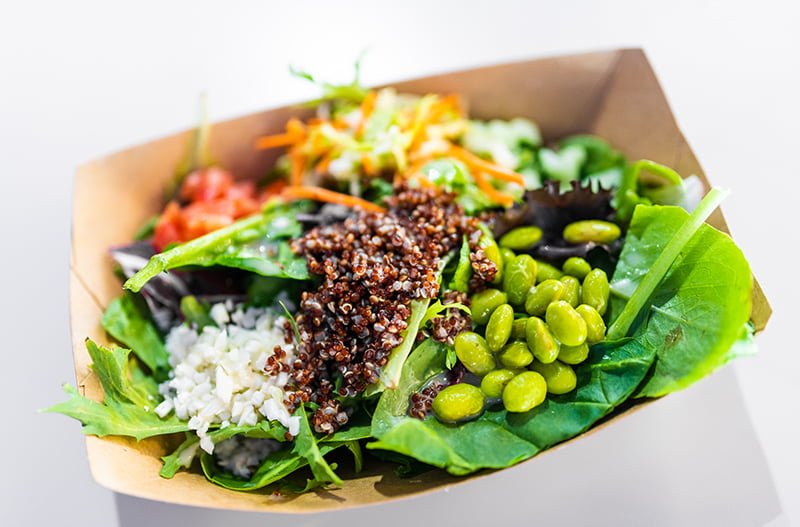 At the other end of the spectrum, Electric Umbrella is currently one of Sarah’s favorite spots at Epcot thanks to the Vegetable Quinoa Salad: “Cauliflower, Carrots, Cabbage, Cucumbers, Tomatoes and Edamame drizzled with Agave Lime Dressing.”

Although quinoa is my long-time nemesis, this salad is undeniably ambitious. It’s a far cry from the ‘iceberg lettuce and maybe a tomato or two’ salads of yesteryear at Walt Disney World, and the variety of veggies is nicely punctuated by that zesty citrus flavor of the agave lime dressing. I’d never voluntarily order this, but if I’m feeling guilty after a week’s worth of brisket sandwich-esque choices, it’s a very strong change of pace. Healthy, filling, tasty, and relatively inexpensive. 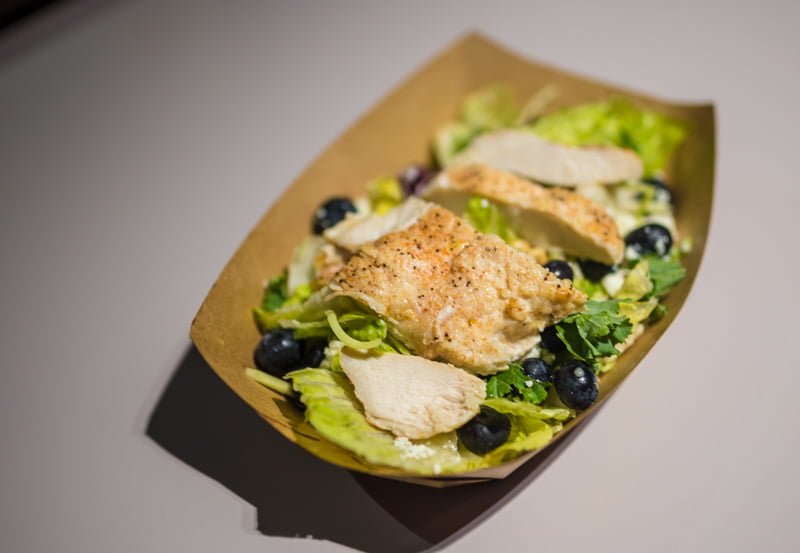 If you want another healthy option, but something with meat, the Energy Salad with Roasted Chicken isn’t too shabby, either. More ambitious than the typical Walt Disney World salad, but not as good as the option above in our opinion.

About the only criticism I have for Electric Umbrella’s current menu is that the Mojo Pulled Pork Burger is a slight step backwards as compared to the French Dip Burger, which was a true hidden gem. However, even the new burger is a decent option, with toppings that mask the normal (bad) Walt Disney World burger patty. 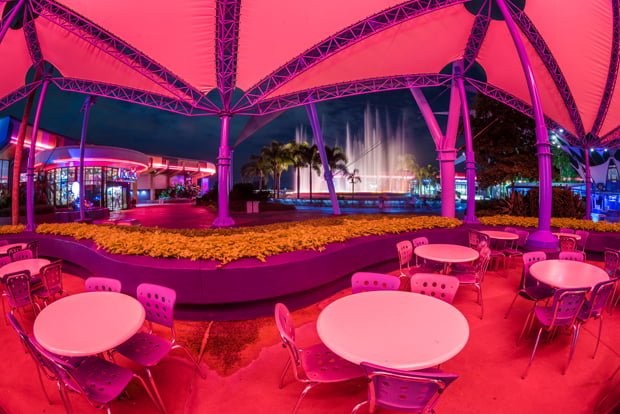 If you’re skeptical of all this praise, that’s very fair. Many of you have probably been burned by Electric Umbrella in the past. It’s prominent location and mesmerizing neon have beckoned unassuming guests for years. And if you unwittingly ordered something bland and boring here before venturing back to World Showcase to find a cornucopia of diverse dining options, you might’ve felt tricked.

Also, this is not the opening salvo for some breathless tribute to Electric Umbrella when its closure and reimagining as a new counter service restaurant is inevitably announced in a few months. It’s safe to say Electric Umbrella’s, at least in the restaurant’s current form, demise is coming within the next year or so.

(Update: Walt Disney World has announced its closure, but not when it will close. We anticipate Electric Umbrella lasting through this holiday season and closing in early 2020 for roughly a year. This building will not be demolish as part of the Epcot overhaul, but we anticipate a new name and restaurant concept coming out of renovation. Stay tuned!) 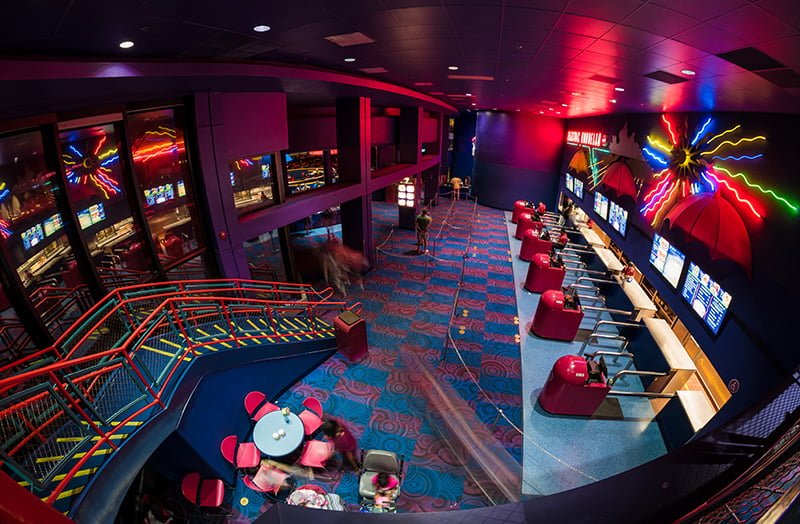 To that, I say both bring it on and good riddance. I do enjoy people watching from the upper level of Electric Umbrella (when it’s open) and sitting outside on a cool night under the warm glow of the neon lights while watching Fountain of Nations. I’ll miss both of those things about Electric Umbrella, as well as its current menu.

I’m also a realist who recognizes that Electric Umbrella is over a decade overdue for a wholesale makeover, and its current atmosphere is best described as “dead mall from the 1990s.” That second level could easily be converted to retail space housing Sam Goody, KB Toys, and Waldenbooks.

There are some aspects of Electric Umbrella for which I have a sentimental or nostalgic attachment, but my overall attitude to the restaurant is tear it to the ground and start over. In my years of visiting Epcot, I don’t ever remember a time when Electric Umbrella promoted the optimism or ideals of EPCOT, and I won’t mourn its loss as if it did.

However, in the here and now, Electric Umbrella has a deceptively good menu that operates in extremes: ambitious healthy items and unambitious but delicious guilty pleasures. If you’re craving either of those and want to dine in the delightful atmosphere of an abandoned shopping mall designed in 1994, Electric Umbrella is just the place for you!

Have you dined at Electric Umbrella recently? Was it better than you expected, or are we crazy for giving it any praise? Anything you like or dislike here? What about the fall from grace of Sunshine Seasons? Any questions we can help you answer? Hearing your feedback—even when you disagree with us—is both interesting to us and helpful to other readers, so please share your thoughts below in the comments!

67 Responses to “Disney World’s “Worst Restaurant” Is Not So Bad.”