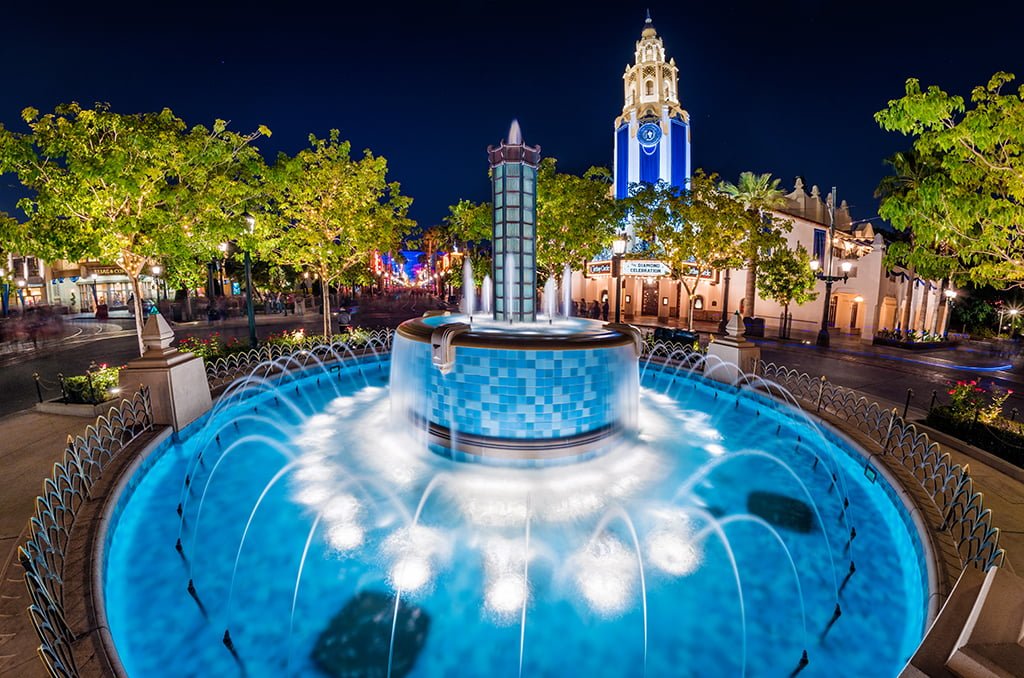 Carthay Circle Restaurant in Disney California Adventure is Disneyland Resort’s top in-park dining experience. This review features food photos, thoughts on value for money, and opinions on cuisine quality. It encompasses our experiences at the Carthay bar & lounge, as well as the table service restaurant in Carthay Circle Theatre.

Carthay Circle Restaurant’s menu consists of trendy modern cuisine with a diverse range of flavors and locally sourced ingredients. Many items on the menu are flavors of Southern California, but it’s not an overly “California” menu. Inside, it feels like an upscale old Hollywood place. Sort of like the Hollywood Tower Hotel, except without the lightning and stuff (although I did half expect to find Rod Serling inside).

Being an upscale restaurant inside a theme park is a tough balancing act–upscale dining requires a certain menu, level of service, and ambiance, whereas theme parks are bustling places often filled with sweaty tourists. Nailing the ambiance thus becomes a challenge, and it’s a bit of a gamble for Disney…

While Napa Rose in Disney’s Grand Californian Hotel has proven quite popular, it benefits from locals being able to visit without paying park admission. That restaurant can “compete” with other high-end dining options in Southern California, whereas Carthay Circle Restaurant’s clientele is different.

This is because Carthay Circle Restaurant caters only to the theme park crowd, and has to compete with attractions for the attention of this crowd. Unlike other restaurants that have gone “extinct” at Disney California Adventure in the past, Carthay Circle Restaurant is located prominently in Disney California Adventure’s wienie, making it more difficult for Disney to just shutter.

On top of that, much of the dedicated Annual Passholder base at Disneyland was a bit perturbed when Carthay Circle Theatre was announced as the home of a restaurant and two lounges rather than an actual attraction. In other words, Carthay Circle Restaurant has had a lot of pressure on it since even before it opened to really offer an incredible experience. 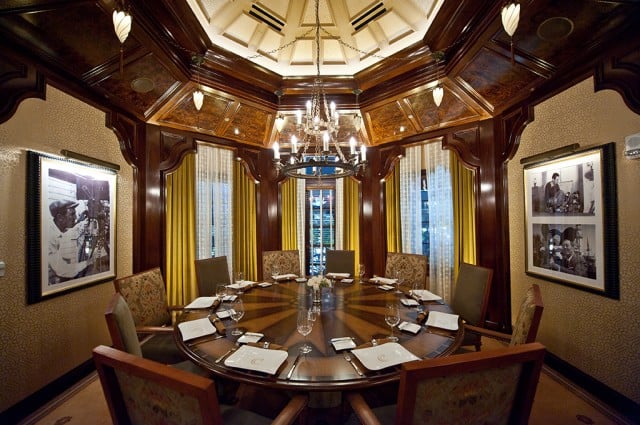 As with all things related to the re-launch of Disney California Adventure, Disney has been touting the restaurant and its chefs Andrew Sutton and Gloria Tae, both of whom helped make Napa Rose one of the premier SoCal restaurants.

They personally crafted the menu for Carthay Circle Restaurant, which is quite unlike anything seen before in a Disneyland Resort theme park restaurant (excepting the exclusive Club 33), and is more ambitious than The Hollywood Brown Derby at Disney’s Hollywood Studios or Monsieur Paul at Epcot.

This menu had us convinced that we’d need to experience the restaurant on its opening day. (Update: we’ve returned to Carthay Circle Restaurant many times since, and it’s still among our favorite restaurants at Disneyland Resort.) 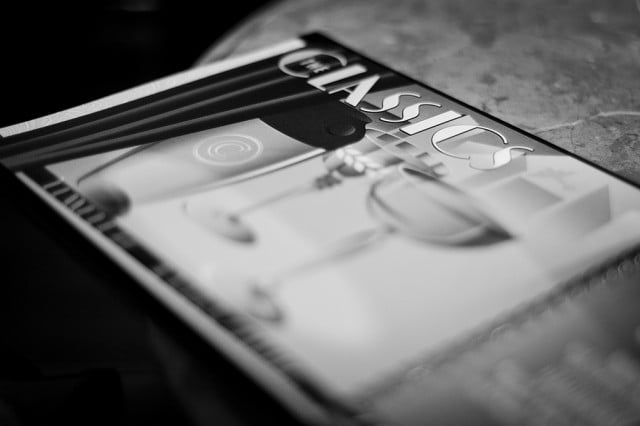 With our friends Kate and Henry, we visited Carthay Circle Lounge that day as soon as it opened to be among the first to experience that. That was our first glimpse inside the “Theatre,” and it was beyond impressive. Disney spared no expense when it came to the design of Carthay Circle Theatre, and it showed even in the lounge.

Unlike most lounges at Disneyland (or Walt Disney World, for that matter), the menu of Carthay Circle Lounge was unique! I’ve offered my share of criticism for the uninspired “Generic DisneyParksÂ® Drink MenuÂ®,” as I call it, so it was great to see Disney starting to go in the other direction with their lounge menus.

First with Trader Sam’s, and now with Carthay Circle Lounge. The great thing about being at this lounge on opening day for “rope drop” was that it was pretty empty (most guests were racing around Cars Land) and team behind the lounge was largely present. In fact, there were probably more suits in the lounge than there were guests. 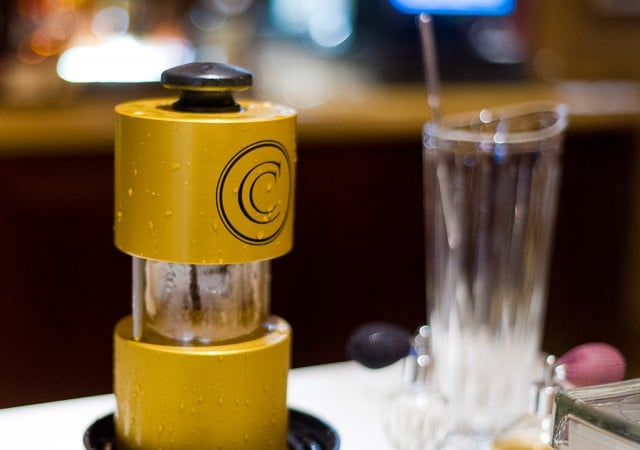 We had the chance to talk to one of the people responsible for the drink menu at Carthay Circle Lounge (among a few other places at different Disney restaurants around the globe), and he indicated that a lot of thought had been put into it–both to make it as authentic to the theme as possible and to make it appeal to guests.

They were working on going this direction with more menus, as there was a cultural tide towards engaging drinks, and because Trader Sam’s had proven successful. Interesting stuff, and hopefully this trend continues. 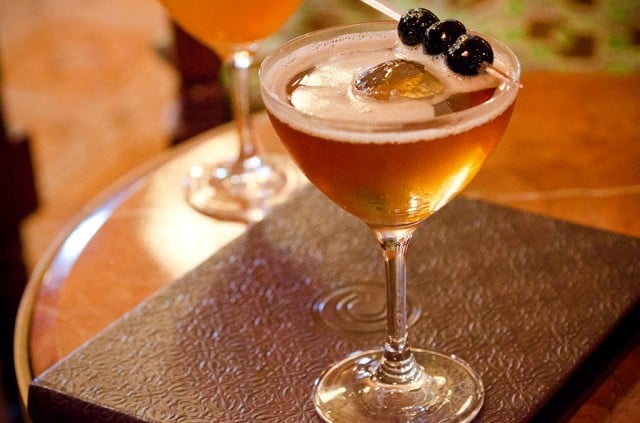 What he had said about the menu was absolutely true. We sampled several drinks (you know…for the sake of research), and every single one had an exceptional recipe and was very well-made.

Over the course of the next few days we stopped in the Carthay Circle Lounge a few times, with our favorite drinks being the Carthay Manhattan and the Carthay Club Mojito. 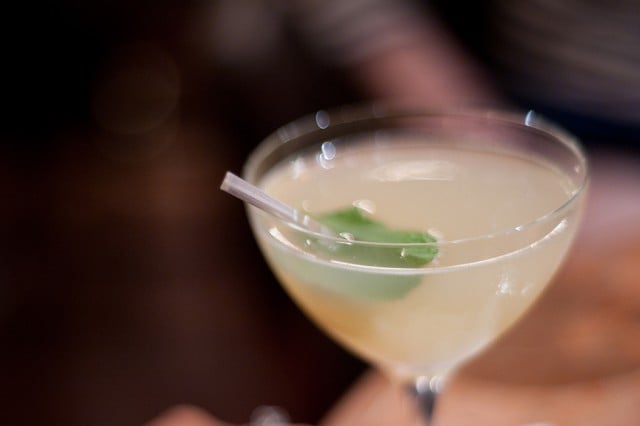 The only drink that was “a bit much” was the Aviator Cocktail, which was mixed incredibly strong. But better strong than watered down and sugary (as is endemic of most Disney drinks).

We didn’t have a single drink that could be described as glorified sugar water with some booze splashed in. The drinks were all brilliant, and for this alone, the Lounge receives high marks. The lounge’s atmosphere is likewise superlative. 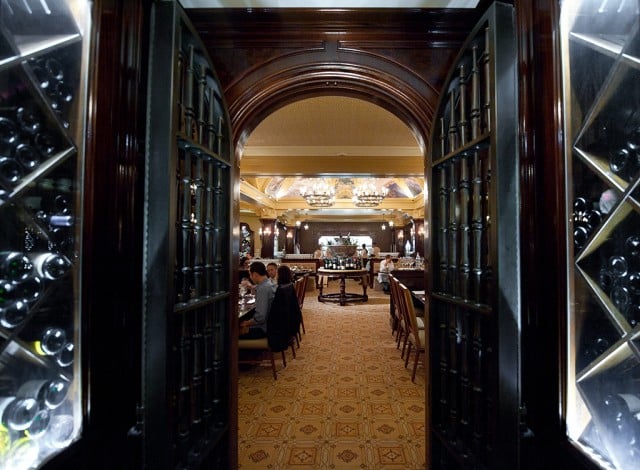 Our first meal at the actual Carthay Circle Restaurant was on opening day. The first decision we had to make was whether to eat in the luxurious and ornately designed inside dining rooms, or on the terrace with a view of Buena Vista Street. We ultimately opted for the terrace so that we could gaze out at the amazing street and watch Disneyland’s Magical! summer fireworks show near the conclusion of our meal.

Next time we’ll eat inside. It seems like the better overall experience. Plus, you can go to the terrace for the fireworks if you’re eating inside (if the terrace is open). 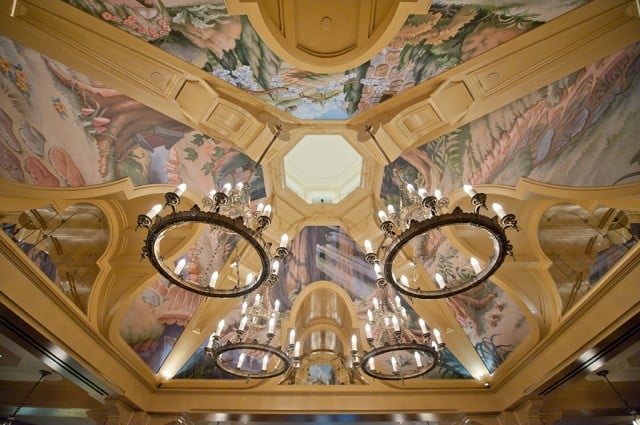 The beauty of the interior of Carthay Circle Restaurant cannot be overstated. Servers are willing to take guests on tours of the restaurant, and we strongly encourage you to take advantage of this. Disney went all out to make this something special.

From deep, rich wood paneling to black and white photos of Walt Disney on the walls to a gorgeous vaulted ceiling with art inspired by Snow White, there’s no question that Carthay Circle Restaurant is a fine dining experience. For serious Disney fans, it will feel like more than just a restaurant. 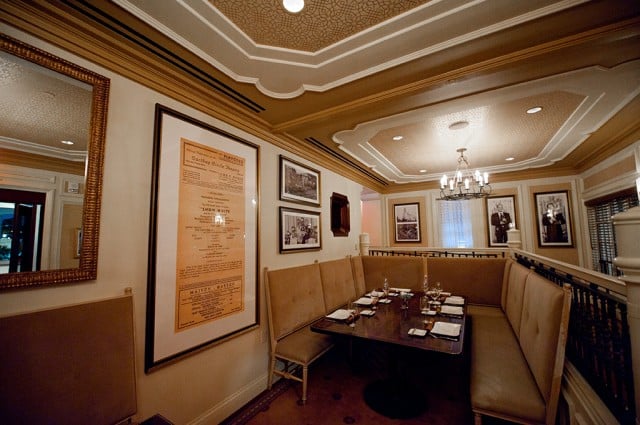 The level of detail and exquisite craftsmanship are astonishing, and the restaurant abounds with tributes to Walt Disney and nods to The Walt Disney Company’s past. It truly is like “Club 33, Disney California Adventure Satellite Restaurant.” The only difference is that–and this might sound like heresy to some–is that Carthay Circle Restaurant looks nicer. 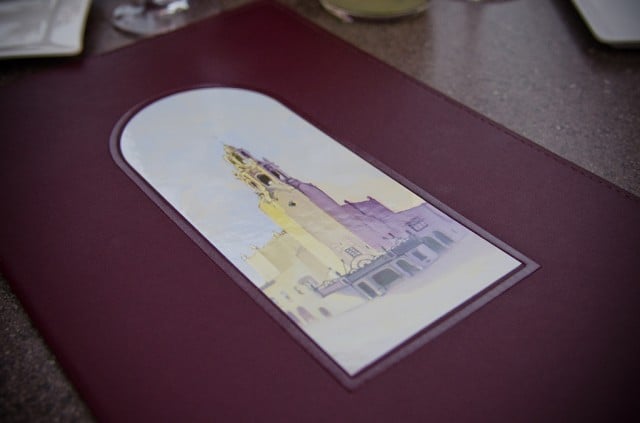 We started our actual meal by ordering drinks from the downstairs lounge, which were delivered to our table upstairs shortly after we were seated.

The restaurant also has its own drink options, but we had went for the drinks downstairs. Initially, we planned on only ordering a couple of appetizers for the table that the four of us would split: the Halibut Ceviche and Carthay House Biscuits. 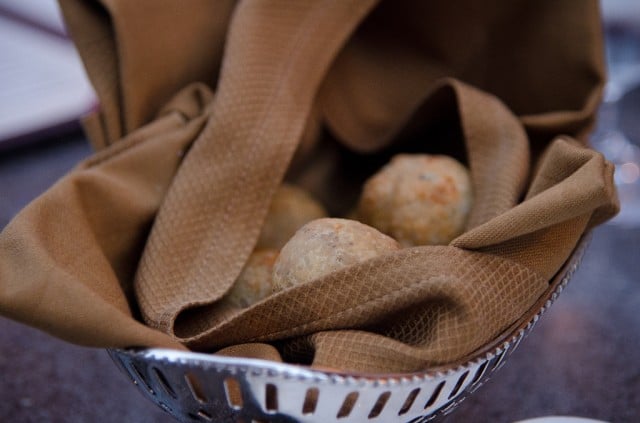 The biscuits were simply too good to only have one serving of, so we immediately ordered another basket once we tried them. Biscuits is a misnomer. These are more like breaded balls stuffed with cheddar, bacon, and just a touch of jalapeno.

These have already become one of Carthay Circle Restaurant’s signature dishes (so it’s not just us) that are a must order, and we’ve heard plenty of others raving about them. 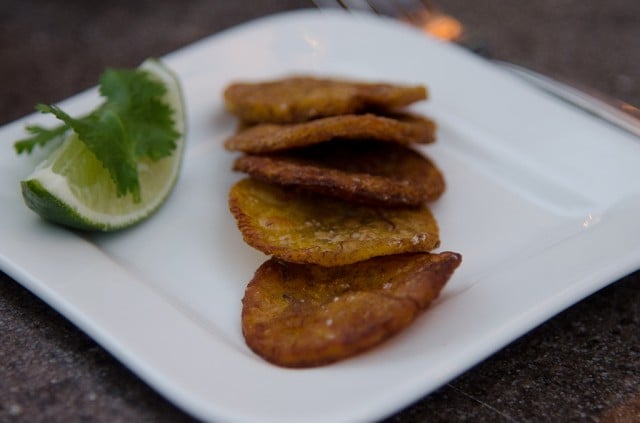 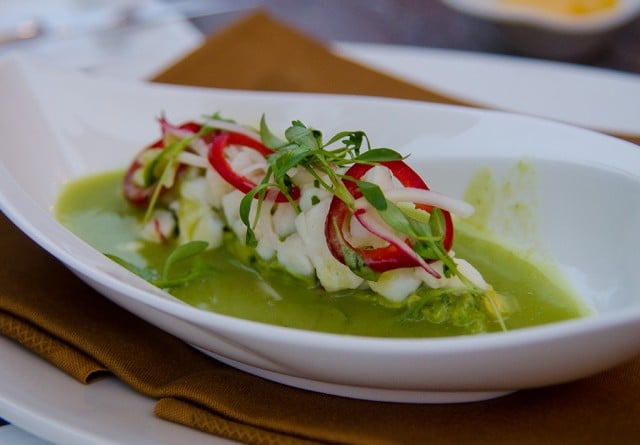 With the exception of one Grilled Rib-eye that was ever-so-slightly overcooked, all four dishes were perfect. 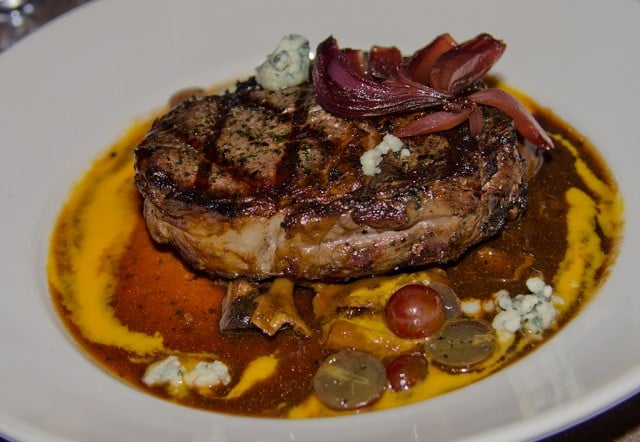 My Ribeye was an excellent cut, cooked to perfection, and the mushrooms and blue cheese perfectly juxtaposed the flavor of the meat.

Speaking only to the quality of the dish, I found this ribeye compared quite favorably to the popular Club 33 Chateaubriand and just behind the Napa Rose Filet Mignon. 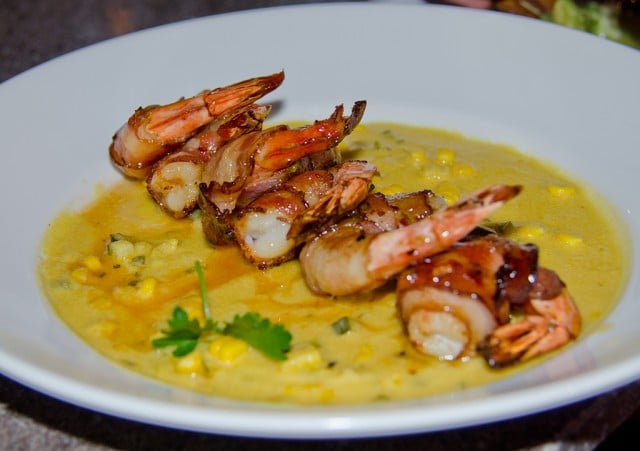 The creamy corn-salsa gave them a unique taste. Of course, you can’t go wrong with bacon (it even goes with ice cream!). 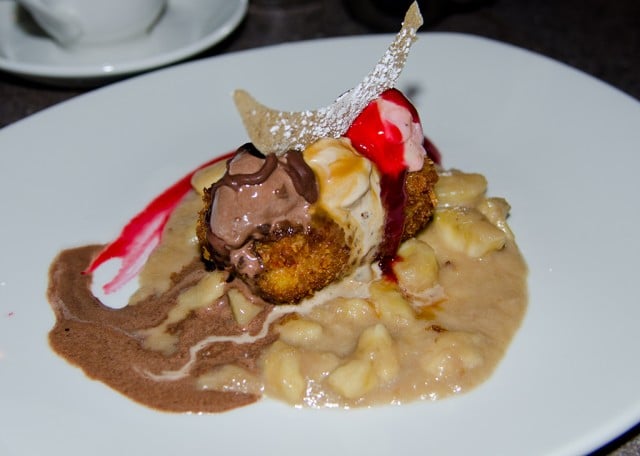 We finished the meal with dessert, and even though we had already had a lot, we couldn’t resist. I tried the highly recommended Fried Banana Split Monte Cristo Sundae, and it exceeded my expectations.

The emphasis was on the fried banana, with the ice cream taking a smaller role, but balancing out the banana very well. The presentation on each dessert was wonderful, and everyone else seemed to like their desserts as well. Dessert portion sizes are small, and I would not recommend them for sharing; they were all also a bit pricey. 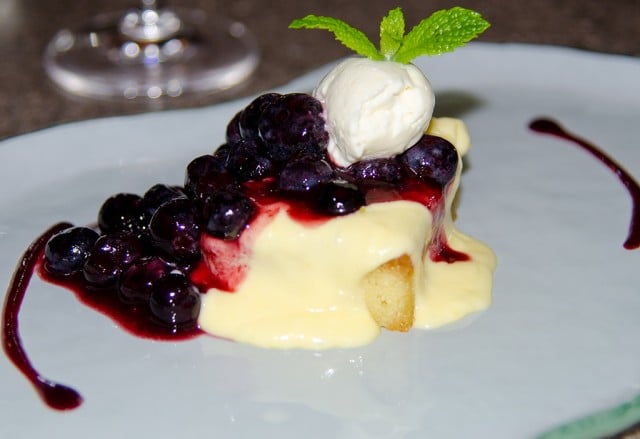 As we finished dessert, Magical! began, and we had a clear view to it from the terrace (click here for additional photos of the fireworks from Carthay Circle Restaurant).

The music was not pumped into the restaurant (understandably given the clash of themes), but it was still enjoyable to watch the fireworks from a new location. 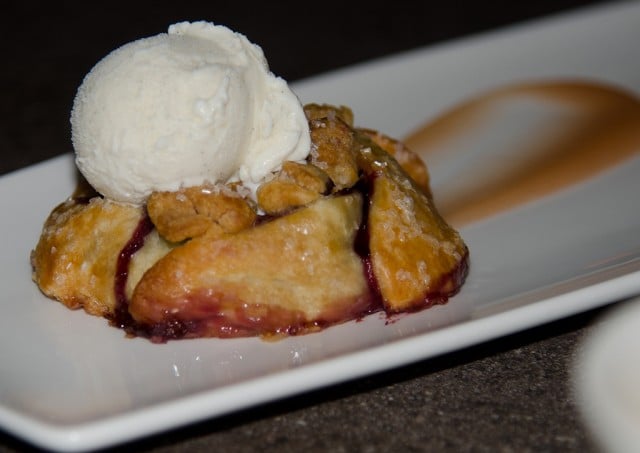 If you don’t have a Park Hopper ticket, or don’t want to go to Disneyland for whatever reason, going out to the terrace during the fireworks is a suitable alternative. 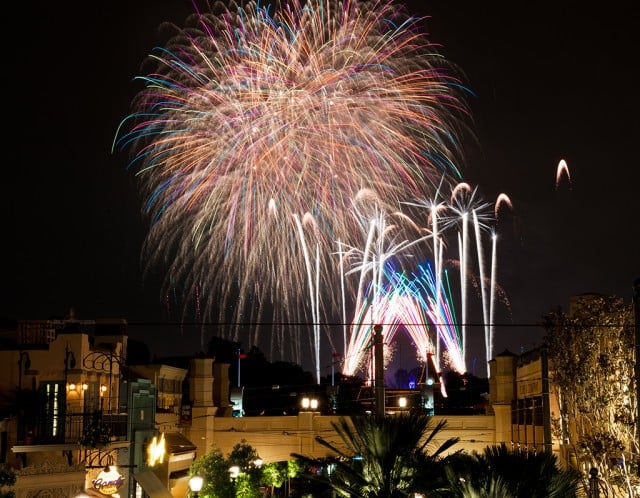 If you’ve been to Carthay Circle Restaurant, what did you think of the food? What about the theme and atmosphere? Do you think it’s one of the best Disneyland Resort restaurants? If not, which restaurants do you prefer? Do you agree or disagree with our assessment? Any questions? Hearing your feedback–even when you disagree with us–is both interesting to us and helpful to other readers, so please share your thoughts below in the comments!