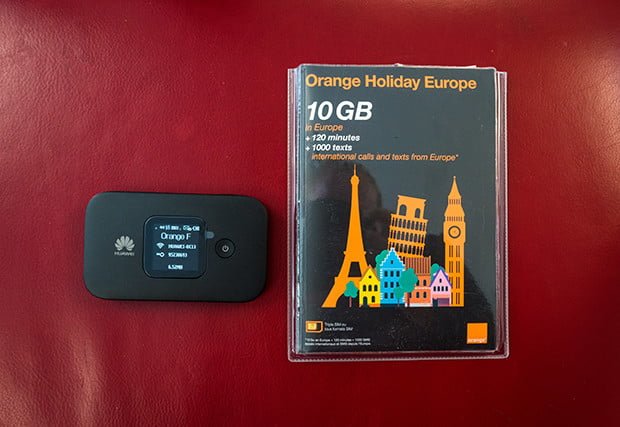 In the second installment of our Disneyland Paris 25th Anniversary trip report (click here for Part 1), I’ll review and share photos of the new entertainment, including Disney Illuminations and Disney Stars on Parade. First, I’ll start with a totally unrelated tangent about a MiFi unit and SIM card I bought…

For years, we’ve rented MiFi units when traveling abroad, including to both Europe and Japan. It’s not a cheap proposition, particularly on longer trips. Still, it’s cheaper than using our data, particularly before AT&T started offering the $10 “International Day Pass” (which is not available in Japan, anyway).

This time, I did a fair amount of research and came to the conclusion that it would be advantageous to just purchase my own MiFi unit and buy SIM cards, which are pretty cheap in both Europe and Japan. I ended up ordering this Huawei 4G LTE MiFi, which was ~$111 on Amazon. When we landed at Paris-Charles de Gaulle Airport, I found the nearest “Relay” store (they’re all over the airport), where I purchased an Orange Holiday SIM Card with 10 GB of data for ~$40…

This SIM Card was more than enough data (I could’ve purchased a 2 GB card for ~$25, but was afraid it wouldn’t be quite enough) for our 8-day trip, and would’ve also sufficed for a 14-day trip. Setting it up was totally hassle-free, and I was good to go within 2 minutes of opening the package and inserting the SIM card into my MiFi unit.

Based upon my math, the ‘break-even’ point for buying my own MiFi unit versus renting one is 2 trips totaling around 18-20 days. For me, this made complete sense, and is something I should’ve done a long time ago.

Simply inserting the SIM card into my phone (our iPhones are ‘world phones’) would’ve also been an option, but I prefer the MiFi approach so I can easily connect multiple devices simultaneously without phone interfacing. Totally a matter of personal preference on that.

The MiFi unit worked incredibly well everywhere we went, including Disneyland Paris, the city of Paris, and the Loire Valley. There were a couple of remote places where I didn’t have service, but I know others who were using other networks in France had the same issues. Overall, I’m satisfied with the purchase, and would recommend it if you’ll be traveling internationally a moderate amount. (Frequent international travelers might look to T-Mobile’s international plans, instead.)

With that non-sequitur out of the way, let’s look at the new 25th Anniversary Disneyland Paris entertainment… 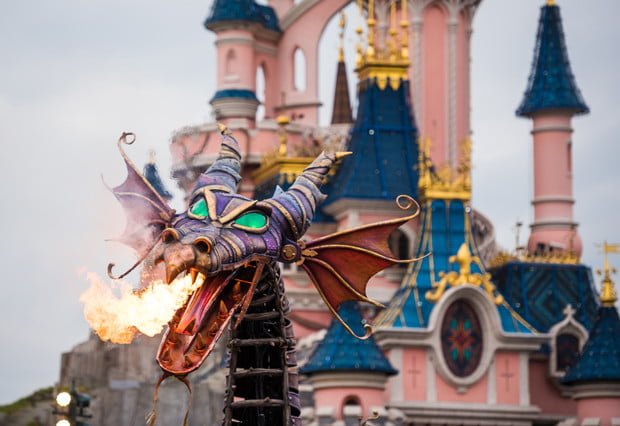 We’ll start with Disney Stars on Parade, which is the new daytime parade at Disneyland Paris. I remember back when we first saw Disney Magic on Parade for the 20th Anniversary. This was before we had visited any other international park, and when our “home” parade was Walt Disney World’s daytime parade–well before Festival of Fantasy debuted.

I even commented on this in our Disneyland Paris 20th Anniversary Trip Report at the time: “Magic Kingdom, which has been running the same tired parade concept under different names for about the last 15 years, has really ruined daytime parades for us, so we initially didn’t really care about this.” As a result, we loved Disney Magic on Parade, going as far as to hope that Festival of Fantasy would draw inspiration from it, and (heh), “gets rid of that 27 year old (no joke) Castle float.” 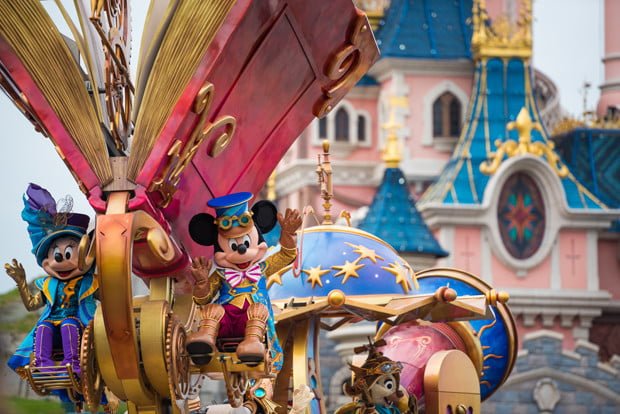 It’s funny how perspectives change. The following spring we visited Tokyo Disneyland and saw Happiness is Here Parade for the first time. A year later, Festival of Fantasy debuted in Magic Kingdom. Those two parades set new high-water marks for daytime parades, and in turn made Disney Magic on Parade–a parade we both loved the first time we saw it–look like a second-tier offering.

This isn’t to say the previous parade in Paris was no good. It was good enough to watch once per trip, but it was roughly the same quality as the daytime parades in Hong Kong and Shanghai, not in the same league as the exceptional parades in California, Florida, and Japan. 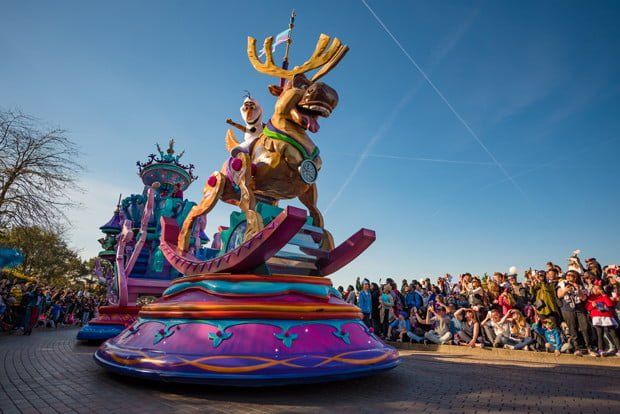 When judging Disney Stars on Parade, I think the threshold question is whether you’re comparing it to its predecessor, or the worldwide Disney parades that have come since. If using the former criterion, it’s a success. It raises the bar on Disney Magic on Parade with a few fresh floats and impressive visuals. 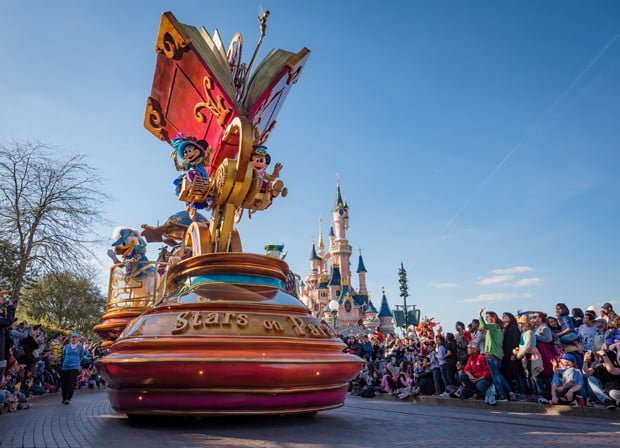 The floats are more detailed, the costuming is better, and Festival of Fantasy just feels more fully-formed. To Disney Stars on Parade’s credit, it does have some strong floats. The Steampunk Mickey & Friends float is great, the Dragon Maleficent float is obviously awesome, and I also really like the Jungle Safari float (among others).

I recently heard an interview with one of the parade’s designers, describing how the parade was inspired by the various emotions Disneyland Paris guests have when describing the park. From there, the design team worked to craft the parade around those emotions, in distinct chapters. 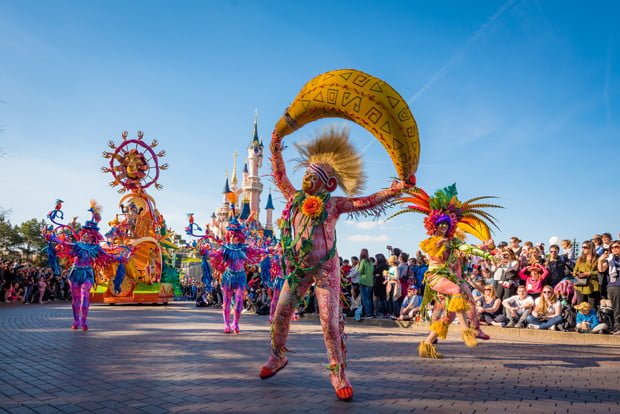 Yeah, sure. Even without knowing what those supposed emotions were that inspired the parade, I’m guessing “dreams,” “magic,” “happiness,” “wishes,” and the other usual suspects of marketing buzzwords were present. I really hope no one wasted any time brainstorming ways to draw inspiration from those words. When the ‘inspiration’ is as vague as that, it’s just as easy to tie them into whatever the finished product is, ex post facto.

Personally, I would’ve loved to see Disneyland Paris go all-in on the ‘discovery’ theme and do a highly stylized, Steampunk-esque parade. I think that could’ve worked pretty well, and left a lasting impression. Actually, any distinct style would’ve been preferable from my perspective. These parades are all starting to run together, and unifying themes would be nice.

Instead, what we get with parades now are a bunch of disparate floats meant to check off boxes with particular characters represented. This isn’t necessarily bad, and a parade can still be really cool without a coherent theme (see Festival of Fantasy), but I’d love to a return to the days when Disney parades were more focused, and there wouldn’t be fear of leaving Olaf out if he didn’t fit the theme. On Page 2, we’ll cover the good and bad of the other entertainment, including the ‘flagship’ nighttime spectacular, Disney Illuminations…