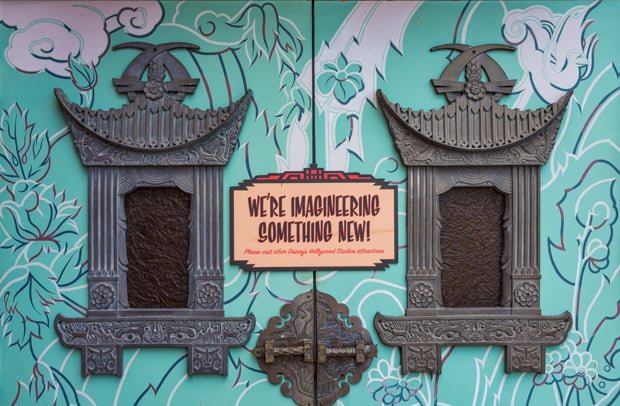 During our Walt Disney World trip, I went to Disney’s Hollywood Studios. Why? I’m still not entirely sure. Let’s go with, so you didn’t have to. Hence this blog post, I guess. In it, I’ll share photos and a construction progress report from DHS.

In actuality, even with much (most?) of the park’s acreage behind construction walls, I still enjoy Disney’s Hollywood Studios. I love the Twilight Zone Tower of Terror, being bathed in the neon lighting of Sunset and Hollywood Boulevards at night, and three of my favorite in-park restaurants at Walt Disney World are here. I even enjoy the stroll from Epcot through the BoardWalk to get here.

I also enjoy seeing things in flux, watching parks evolve firsthand, and documenting that change. I find old Disney construction photos fascinating, and someday I’d like to have my own collection of ‘vintage’ Walt Disney World construction photos. Okay, I think I’ve done enough to justify why I ventured over to Disney’s Hollywood Studios. Besides, I don’t have to answer to you–YOU’RE NOT MY MOM. (Well, one of you is. Hi mom.)

Before we even get into the park, it should be noted that a lot of infrastructure work is occurring outside and around the perimeter of Disney’s Hollywood Studios. Most notably, a significant portion of the parking lot is closed.

This all seems sensible, as upgrading the infrastructure so the park can handle the influx of people once Star Wars: Galaxy’s Edge opens is the savvy move. Team Disney Anaheim, are you taking notes? 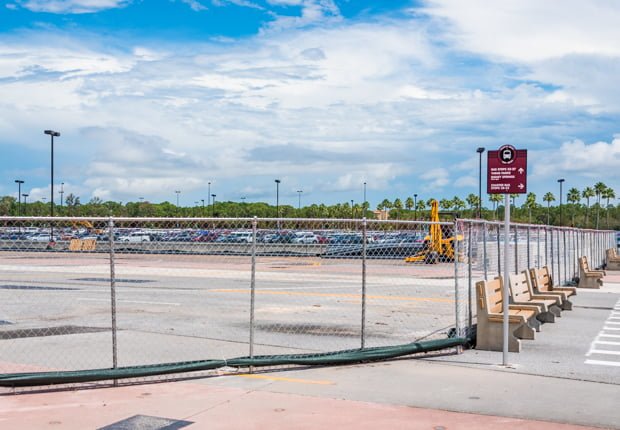 The preliminary work for the Skyliner is also visible near the front entrance.

Inside the park, the first thing we see is the Great Movi…err, Grauman’s Chinese Theater, soon to be the home of Mickey and Minnie’s Runaway Railway. 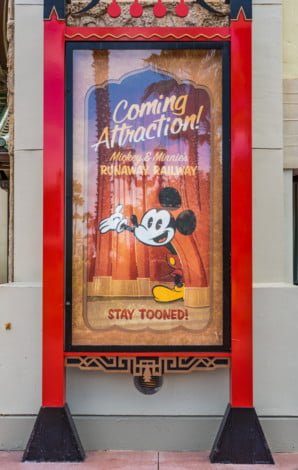 The process of gutting Grauman’s Chinese Theater began a day or two after Great Movie Ride closed. After we opted against a last-minute trip to see Great Movie Ride and Universe of Energy, I was holding out a sliver of hope that Disney would not start work on these attractions until after the start of the next fiscal year (October 1), and might reopen them on days of high crowds.

There have already been reports of some Audio Animatronics and props from the attraction spotted elsewhere backstage at Walt Disney World. I remain optimistic that the car of gangsters will be added to Stitch’s Great Escape, and we’ll get a new, Bonnie and Clyde style ending to that attraction.

I’m taking a wait and see approach with Mickey and Minnie’s Runaway Railway, but I worry that it’ll be entirely or primarily screen-based, and will be short in duration. Basically, Roger Rabbit’s Car Toon Spin 2.0, NOW WITH MICKEY! That’s not necessarily a bad thing…until you consider that it’s replacing a 20+ minute, mixed media attraction. 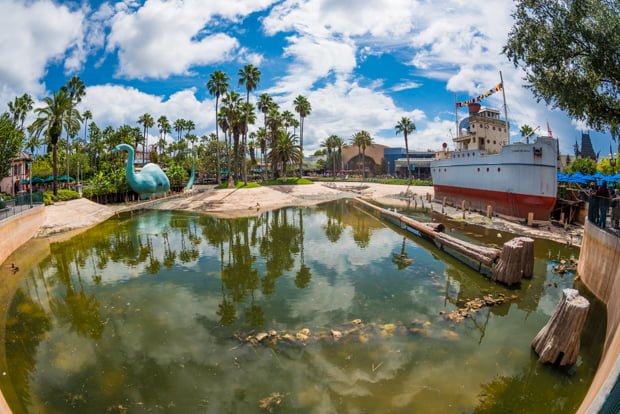 As we previously shared, Echo Lake is getting into the Christmas spirit this year, which is why the lake is currently being drained and cleaned up.

Presumably, it’ll look this way until the Christmas tree is installed, which we’d anticipate will occur in late October. 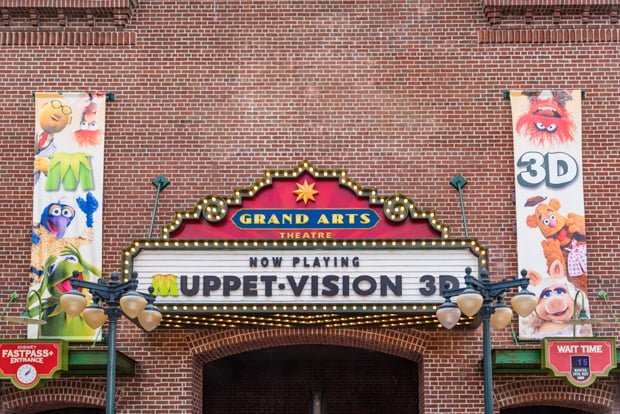 Moving right along, we come to what is for now Muppet Courtyard. I remember when this name change was announced–I was so excited. I care far more about the Muppets than I do Star Wars or Toy Story, and I was optimistic that this meant an expansion of the Muppets’ presence in Disney’s Hollywood Studios.

How naive. Instead, we got a PizzeRizzo, which is hardly the pinnacle of themed design, and placemaking in the area that made it seem like less of a place. With the addition of Grand Avenue, and subsequent announcement that it will swallow Muppet Courtyard, the potential for a greater Muppet presence seems right around zero. 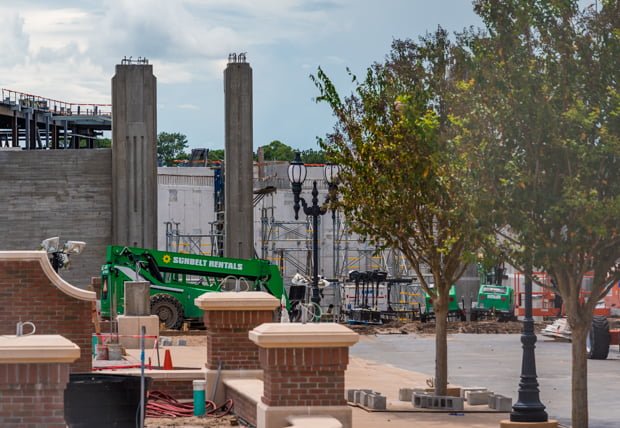 I’m not necessarily against theming more of the park to Hollywood, but that is clearly not occurring with Star Wars: Galaxy’s Edge and Toy Story Land…and it’s not really occurring here, either. Sunset and Hollywood Boulevards reflect an idealized version of old Hollywood.

These areas are beautiful and detail-rich, drawing inspiration from buildings around the real Hollywood. 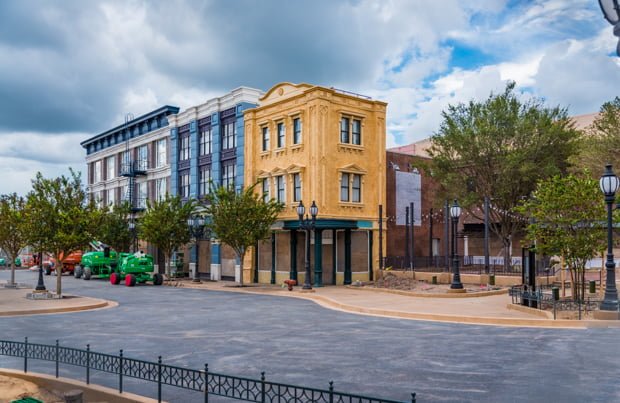 Grand Avenue, by contrast, is themed to modern-day Downtown Los Angeles, and not even the recognizable area of Grand Ave, where museums and the Walt Disney Concert Hall are located.

The buildings look generically styled to match repurposed warehouses in L.A.’s Arts District, but even then, they’re nothing iconic…and DTLA is definitely not Hollywood. 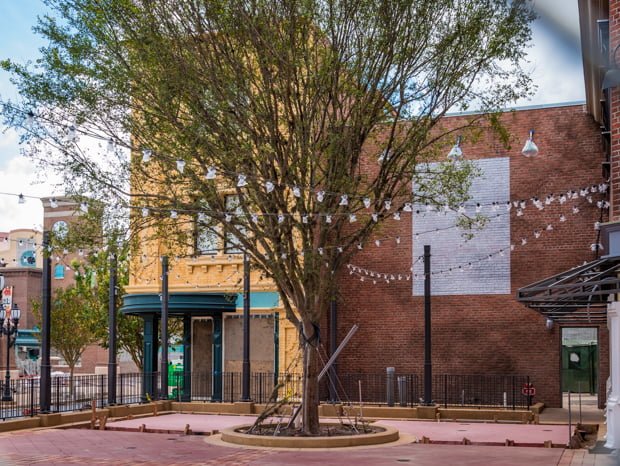 I realize everything in Muppet Courtyard is technically set in Los Angeles already. As part of the longstanding contrived backstory, this area is fake New York, but actually in California. (Because backlot?) I assume at one point this was done to make the area feel familiar to East Coast guests, while still being thematically consistent with the ‘Hollywood’ vibe of the park.

With such an approach, Australia would “fit” in the park if you just appended an asterisk that “JK, this is just an elaborate Australia set located in Hollywood. LOL!” On second thought, I probably shouldn’t give them any ideas… 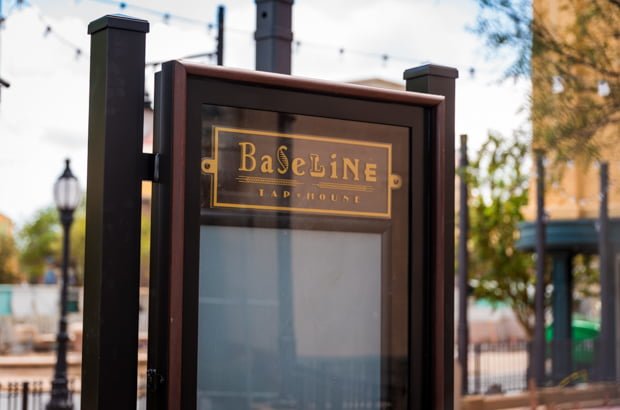 Personally, I would’ve loved to see Disney double-down on the Muppet theme, keeping the over-the-top style and having the new bar reflect that.

Perhaps the Muppets and booze don’t mix, in which case having the same style of gags as in the MuppetVision queue but without explicit references to the Muppets would’ve been perfect. 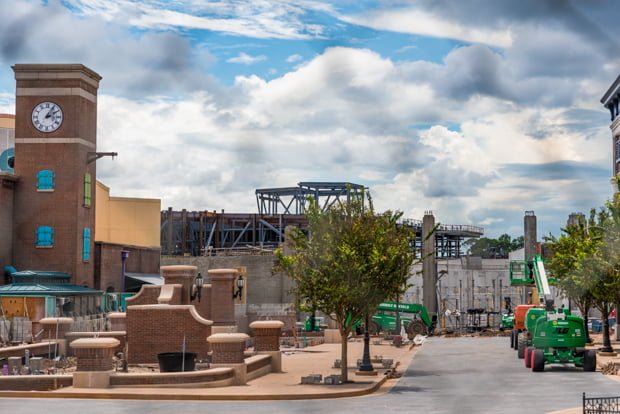 Either way, this whole area is going to be a de facto entranceway to Star Wars: Galaxy’s Edge, and probably is only being designed for the next 5-10 years, so it’s difficult to get too worked up over this change. Squandered potential, sure, but I doubt the expected lifespan (and purpose) justifies something extravagant.

Based on what we saw, it seems likely that Grand Avenue will open later this month, or in early October. It seems pretty far along if the exteriors are any indication. 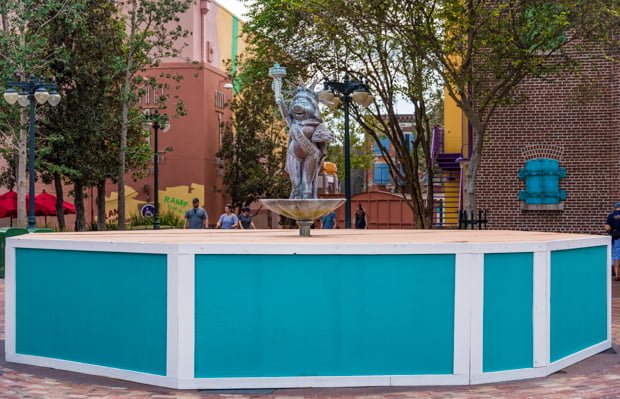 On the plus side, the Miss Piggy fountain is currently being restored, so that water feature (feared to be lost forever) should return soon.

Another potential positive is the rumor we previously covered that a Muppets show akin to “The Muppets Present… Great Moments in American History” is being considered for Grand Avenue. The twist would be that the Muppets perform renditions of the various Star Wars movies. It’s unclear whether this would open with Grand Avenue, or will debut with Star Wars: Galaxy’s Edge. (Our money would be on the latter.)

If that ends up happening, I’ll totally be on board with Grand Avenue. However bland it might look, another show like this would be a huge win for Walt Disney World. The version in Liberty Square is one of the best additions to Magic Kingdom in years, and is an absolute must-do for us every trip. 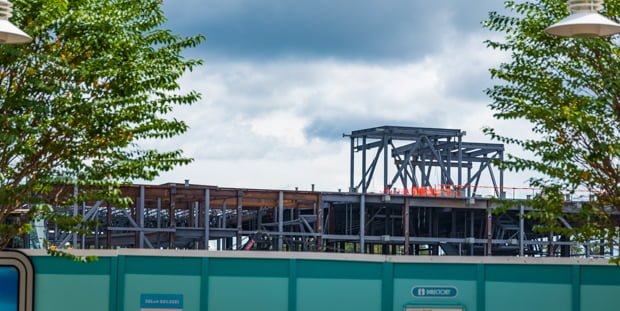 In the same area where you can observe the transformation from Streets of America to Grand Avenue as well as over by Toy Story Mania (where the above photo was shot), you can see Star Wars: Galaxy’s Edge starting to tower over the rest of the park.

Progress here still appears to be at least 4 months behind Disneyland, if not more. At the D23 Expo, Parks & Resort Chairman Bob Chapek indicated that these two lands would not open at the same time, but did not restate the previously-announced 2019 opening date.

I think it’s safe to say that Disneyland’s Star Wars: Galaxy’s Edge will have a 2019 opening. However, for both to open in 2019, Disneyland’s version would probably have to open before Memorial Day, with Walt Disney World’s opening at Christmas.

I just don’t see that happening. A Memorial Day 2019 Grand Opening is within the realm of possibilities for Disneyland, but it now seems Disney intends to do a prolonged hard ticket preview period for Disneyland’s Star Wars land, which will likely occur over the course of a few months.

I think the most likely scenario is a later summer Grand Opening at Disneyland, followed by a (partial?) preview period at Walt Disney World in late 2019. I would expect the Grand Opening at Walt Disney World’s Star Wars: Galaxy’s Edge to occur in 2020. Then again, who knows…this is still a couple of years away. The pace of construction could pick up once Toy Story Land is finished. 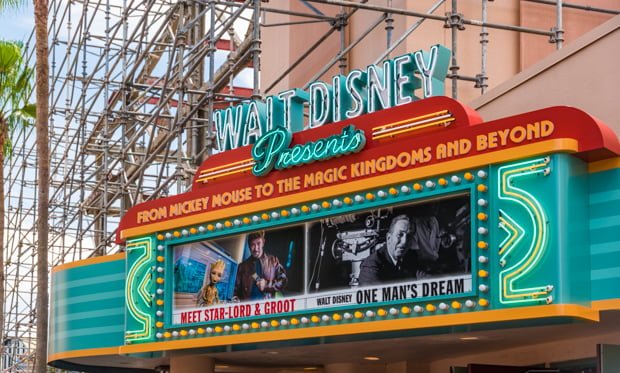 Next, we have the old One Man’s Dream, which is being reimagined to Walt Disney Presents. I absolutely love the new marquee. Much classier and fitting than the old one, which felt very temporary.

The irony is that this one definitely has a temporary component, which will allow it to be updated as the meet & greet changes. 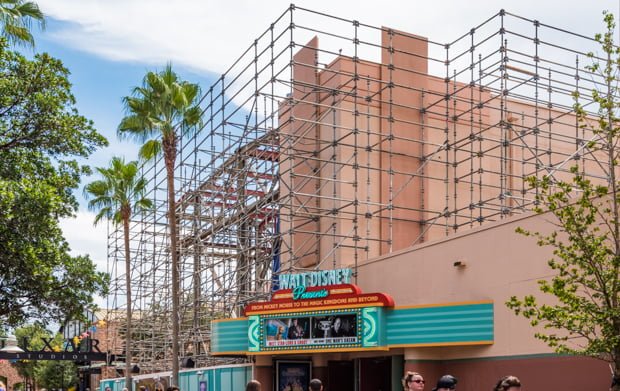 The only real change here is the addition of a new model of Toy Story Land, portion of the D23 Expo model of Star Wars: Galaxy’s Edge, concept art for Mickey and Minnie’s Runaway Railway, and other ‘preview center’ style stuff towards the end of the exhibit.

All of the Walt Disney historical items (or almost all of them) are still there. This reopened during our trip, but the Toy Story and Star Wars models were not yet unveiled. 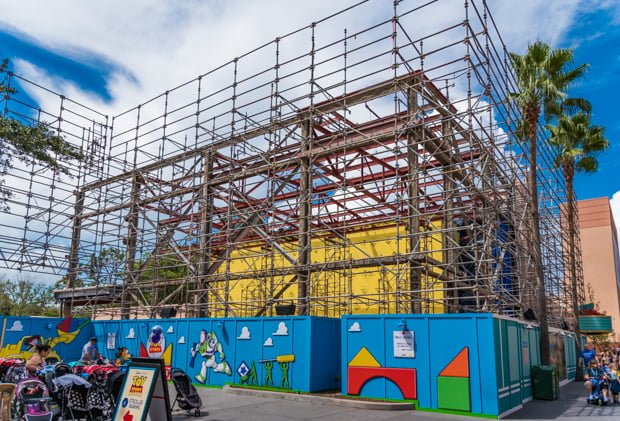 Due to Hurricane Irma, the scrim on this construction project–the demolition of Soundstage 4–was removed, offering a glimpse at the project and into Toy Story Land. Although we couldn’t see a ton, the project looks very far along. It seems Memorial Day 2018 is the target grand opening for Toy Story Land, but I wouldn’t be shocked to see a long soft opening period prior to then (in fairness, I predicted the same for Pandora, and instead we got AP previews with registration, so we shall see).

If Facebook posts (always an oasis of reasoned discourse) and blog comments are any indication, there’s a ton of outrage about all of the work being done at Disney’s Hollywood Studios right now, and why it isn’t being spread out more.

In fairness, I can understand being upset, particularly if it’s your first/only visit to DHS. On the other hand, you can skip it, doing a second day at Magic Kingdom/Epcot or going down the road to Universal for an experience that, currently, offers more bang for your buck. If you do visit DHS, we’d recommend avoiding a full day and instead following our new Half-Day Disney’s Hollywood Studios Itinerary.

On the other other hand, a sense of urgency to get as much done before Star Wars: Galaxy’s Edge opens seems incredibly pragmatic. I have not hesitated to criticize Disneyland’s approach in (failing to) brace for the Star Wars addition, and the crowds that will arrive with it.

Even though there’s less of a need for this in Florida, Walt Disney World is inarguably better preparing for the crush of crowds. Yes, it stinks that so much is behind walls right now, and yes, this all should’ve been addressed ages ago. That doesn’t change the point that millions more people are going to descend upon Disney’s Hollywood Studios when Star Wars: Galaxy’s Edge opens. They will need other things to do, and the park will need ways to absorb the crowds. As someone who visits Walt Disney World more than once per year, I’m not going to get worked up over the amount of construction occurring right now. It’s better than the park being wholly unprepared and playing catch-up for years after Star Wars: Galaxy’s Edge opens.

What do you think of the construction progress at Disney’s Hollywood Studios? Would you prefer a whimsical Muppet Studios land to the Grand Avenue addition? Will you continue to visit this park for the next couple of years, or wait until Star Wars: Galaxy’s Edge is open? Any questions we can help you answer? Hearing feedback about your experiences is both interesting to us and helpful to other readers, so please share your thoughts below in the comments!