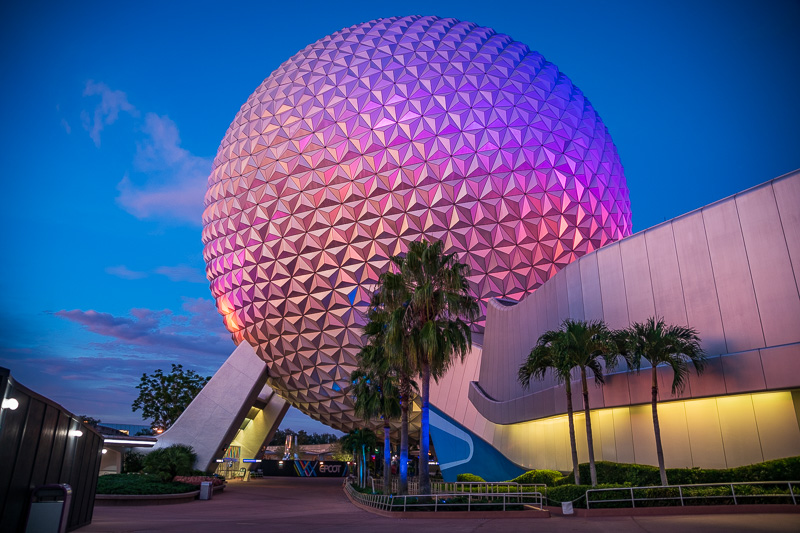 We’re back at EPCOT for our first crowd and construction update in almost a month. In the first couple weeks after Walt Disney World’s reopening, we did more updates from EPCOT than all the other parks combined, and “promised” we’d pump the brakes on that for a while. It’s now officially been “a while.”

By way of quick recap in case you missed our previous updates, the prismatic pylon was installed in front of Spaceship Earth (which has us way more excited than it probably should), the Taste of EPCOT Food & Wine Festival is underway, and construction has resumed on some Future World projects, plus both Harmonious and Remy’s Ratatouille Adventure in World Showcase.

It’s probably no surprise, but we haven’t stopped visiting EPCOT during our posting hiatus. It’s far and away the easiest Disney Park Pass reservation to score–although that hasn’t been much of a weekday issue for the last couple of weeks with any park. More importantly, EPCOT is the park that’s open the latest, and we love our enjoyable evening strolls at Walt Disney World.

We aren’t the only ones. EPCOT is the only park at Walt Disney World that gets gradually more crowded as the day goes on. It’s basically the anti-Disney’s Hollywood Studios, peaking in the late afternoon and evening instead of shortly after rope drop. This isn’t a huge surprise–even prior to the reopening, EPCOT would frequently see post-work crowd spikes.

This is what makes Walt Disney World’s reduced operating hour schedule for EPCOT so illogical. Cutting evening hours is not “confounding” or “perplexing.” It’s simply a bad decision. If Disney wants to reduce hours due to lower attendance forecasts, fine. (It’s still a bad long-term idea, but that’s a different story.) 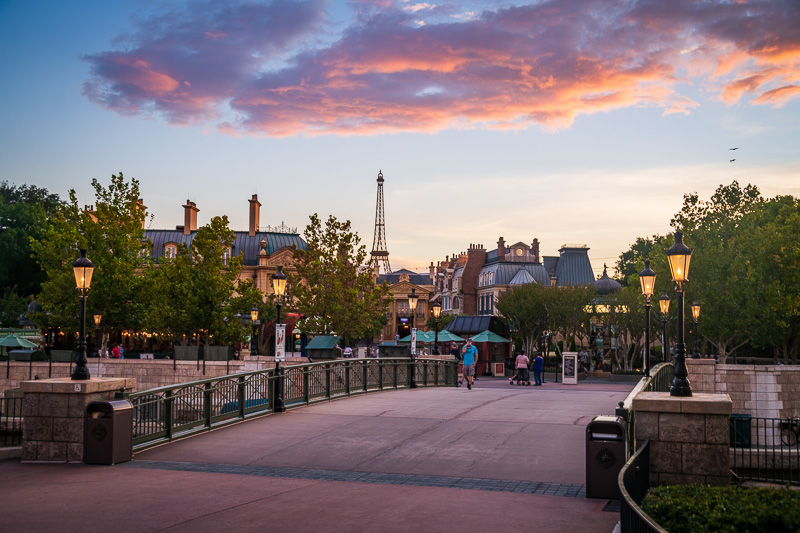 Don’t reduce evening hours, though. If park hours are going to be cut, axe a couple of morning hours and leave the 9 pm closing time. Especially at the one Walt Disney World park that’s known as a local dinner spot.

At a time when people are traveling less and Walt Disney World’s own numbers show that visitor demographics are skewing heavily towards locals. Tourists are unquestionably more profitable for Disney than locals, but locals are better than nothing. 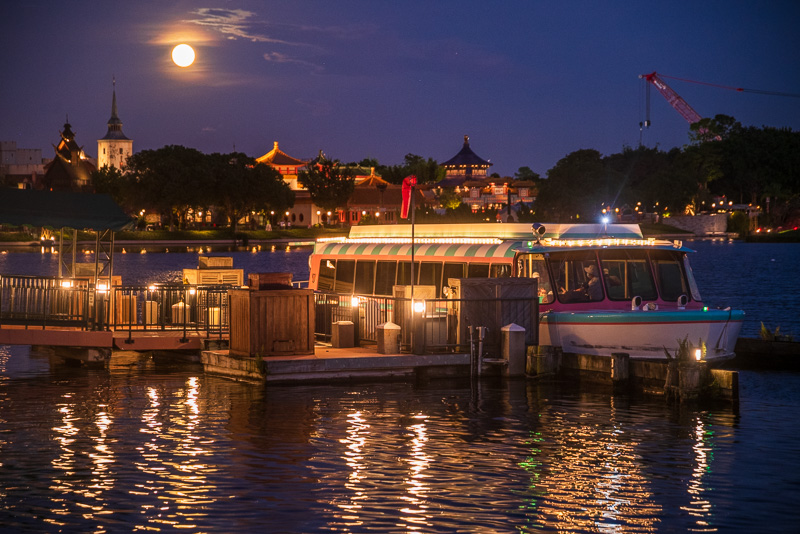 This is not particularly shrewd commentary. It’s all pretty obvious. Look no further than the low crowds on weekdays versus moderate crowds on weekends at every Walt Disney World theme park.

The explanation is simple: most locals work Monday through Friday. To the extent that the parks are open on weekdays after work, only EPCOT is worth burning a Disney Park Pass on–and that has only become true in the last couple weeks as availability has freed up. Most Annual Passholders are still using their limited Park Pass allotments more strategically, and on weekends. 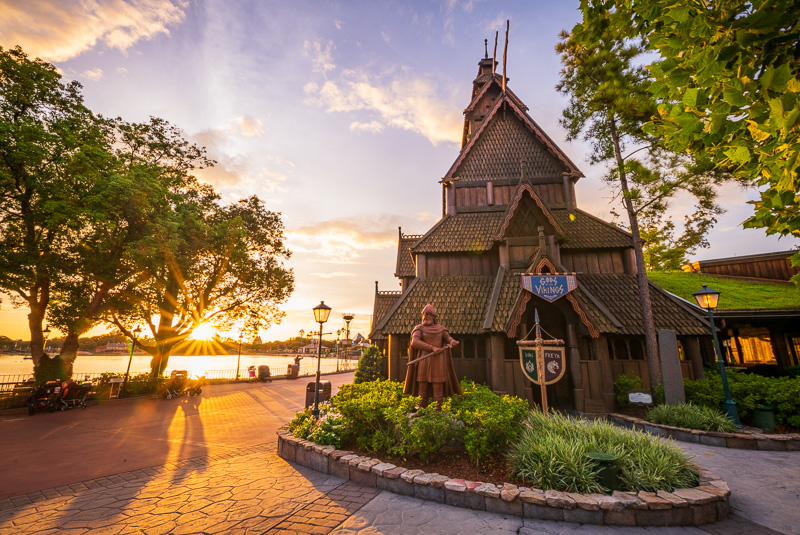 EPCOT is not going to draw post-work visitors with a 7 pm closing time as of next week, which will lead to even lower afternoon and early evening crowds, reinforcing the idea among Walt Disney World decision-makers that they made the right call. (They didn’t.) A better idea would’ve been creating 4-9 pm Park Pass slots for EPCOT, or loosening up availability before hours were cut. But I digress.

The point is that crowds at EPCOT, particularly in World Showcase, increase later in the day in spite of Park Pass mismanagement. There are actually lines at the food booths, restaurants are busier, etc. It’s “worth it” for enough locals because of visiting EPCOT at night is actually enjoyable. There’s the more pleasant weather and ambiance, plus crowds are still low by normal standards. 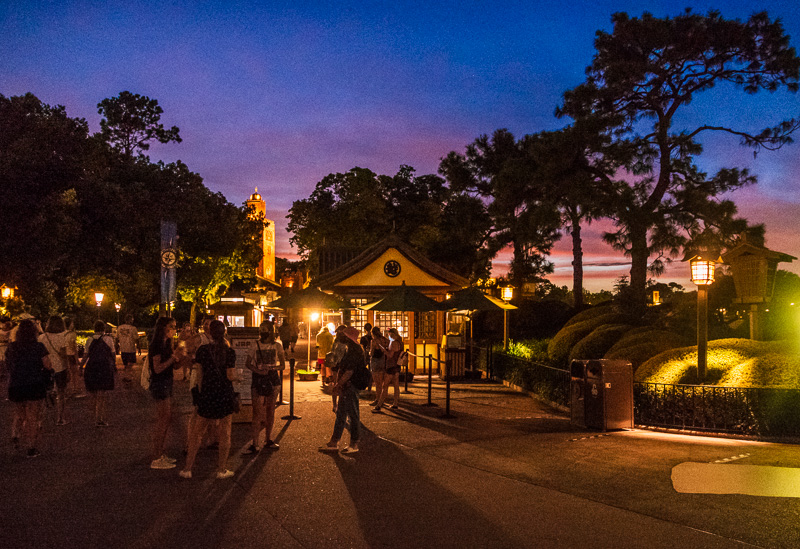 Another thing worth pointing out for anyone visiting in the immediate future is that Labor Day weekend crowds have already arrived at EPCOT. Last night was far and away the busiest we’ve seen the park since reopening; it felt like a normal September evening, attendance-wise. (All of the photos here are from two nights ago–I didn’t take my camera last night.)

We covered this in our Labor Day Weekend Crowds at Walt Disney World, but felt it was worth reiterating here. We didn’t anticipate a spike last night–perhaps EPCOT saw a disproportionate number of guests who arrived later in the day since it was open the latest? Tonight will probably be worse, with crowds peaking Saturday and Sunday. 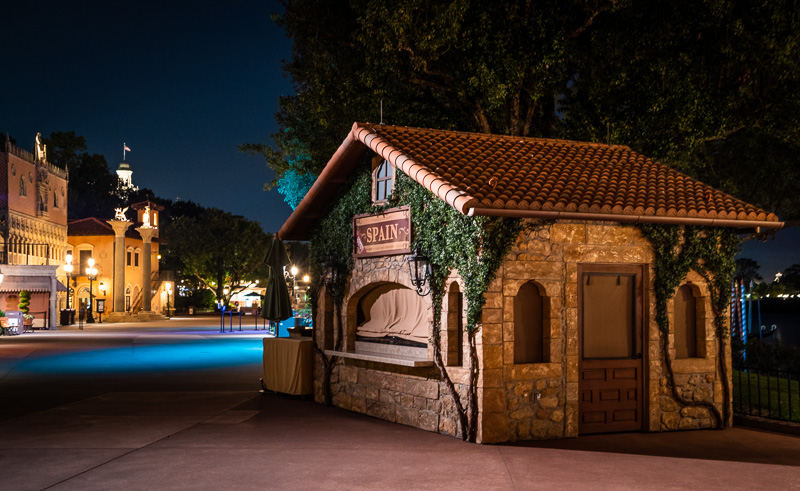 We have an update on the Taste of EPCOT Food & Wine Festival: the Alps and Spain booths have now opened…on select days. (We haven’t seen them operational on any of our weekday visits.)

In more disappointing news–at least to us–the Tempura Donburi has been removed from the Japan booth’s menu. We raved about this, calling it a tremendous value and “my go-to dinner in World Showcase for the summer!” So of course they changed it. If that’s all it takes to get something removed from a menu, next year I’m going to lavish praise upon whatever abominations the Italy booth concocts. 😉 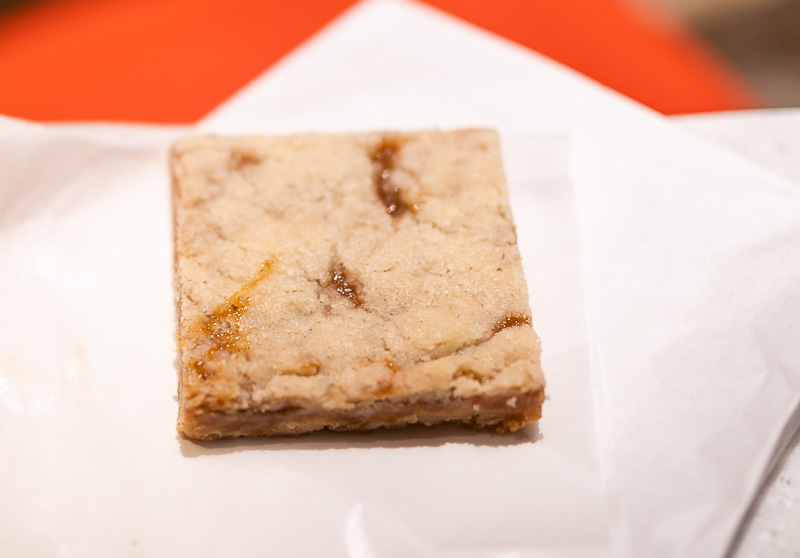 On a more positive note, we’ve been doing late night snacks at Karamell-Küche.

You really can’t go wrong with anything there. 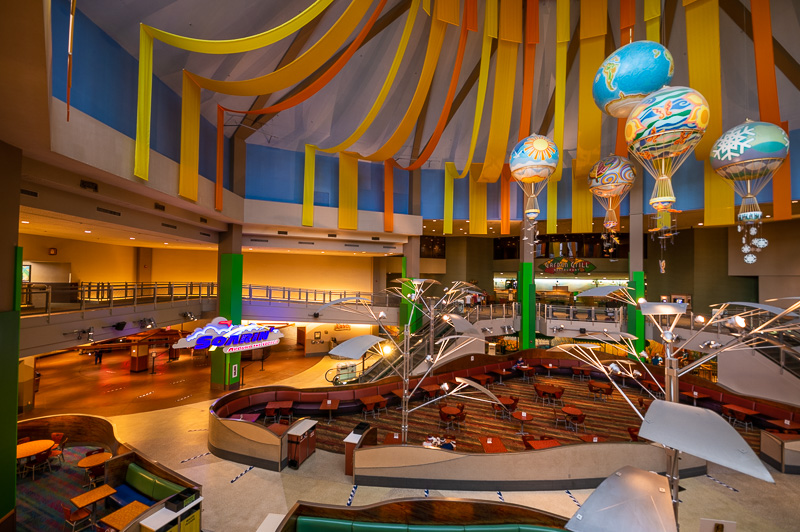 Backtracking a bit, here’s a look inside the Land pavilion earlier in the afternoon. Not many guests around.

The 10 minute posted wait for Soarin’ Around the World is actually however long it takes you to walk through the queue plus how lucky you get timing the load-unload cycle. 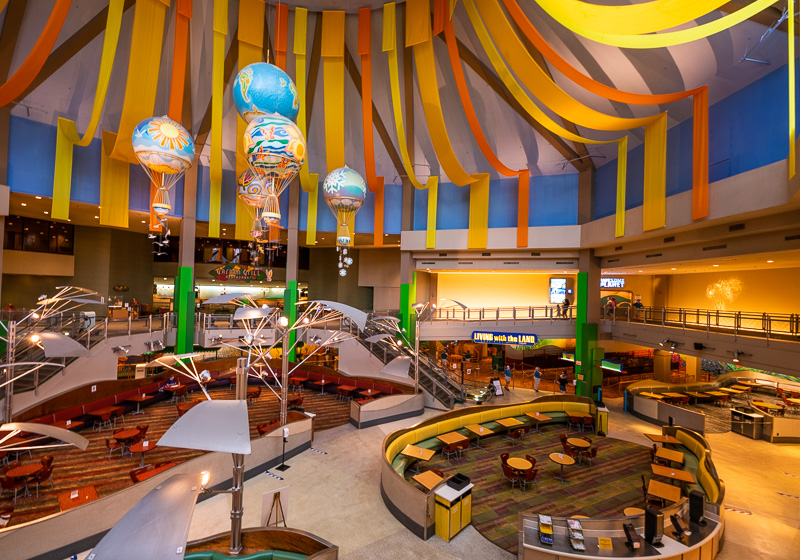 Looking the other direction, where the only people around Living with the Land are Cast Members. It’s a 5-minute posted wait, which is also however long it takes you to walk through the queue.

In the last week-plus, Test Track has been the only Future World attraction with a consistent wait (it’s also been going down with greater frequency than normal). 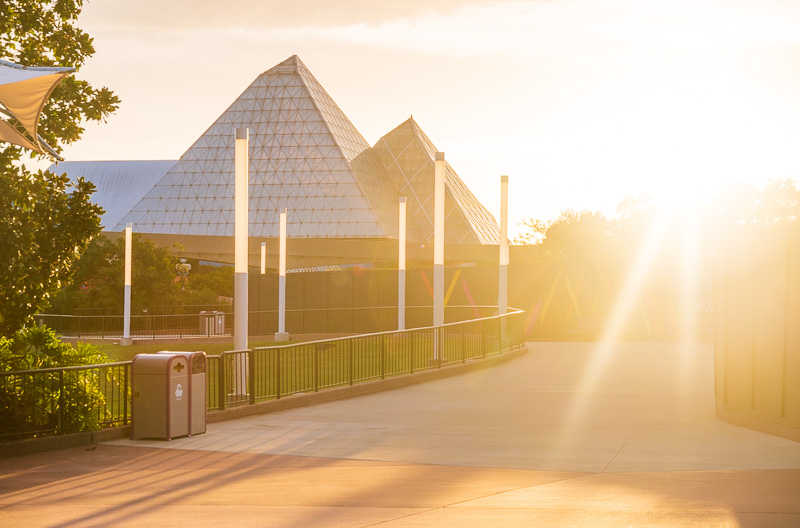 A look at the empty walkway as we navigate our way over to the other side of Future World.

On the one hand, this maze of walls is still annoying and takes away from the atmosphere of Future World. On the other hand, it’s much more pleasant to navigate these narrow pathways with lower crowds. 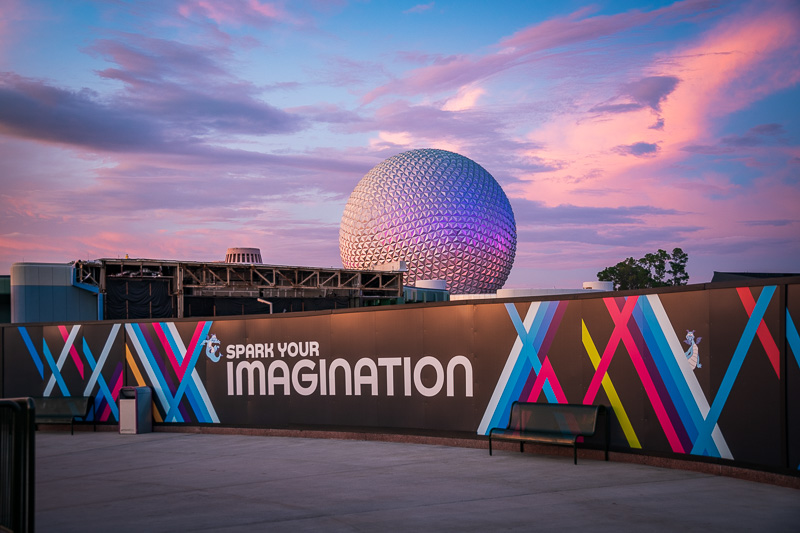 I’m not sure if this photo is depressing or inspiring.

Seeing a partially-gutted Innoventions building is not ideal, but there’s something uplifting about the ‘endless possibilities of imagination’ or whatever. Construction still hasn’t resumed in earnest on EPCOT’s Central Spine. I assume the plans are still being overhauled and reworked. 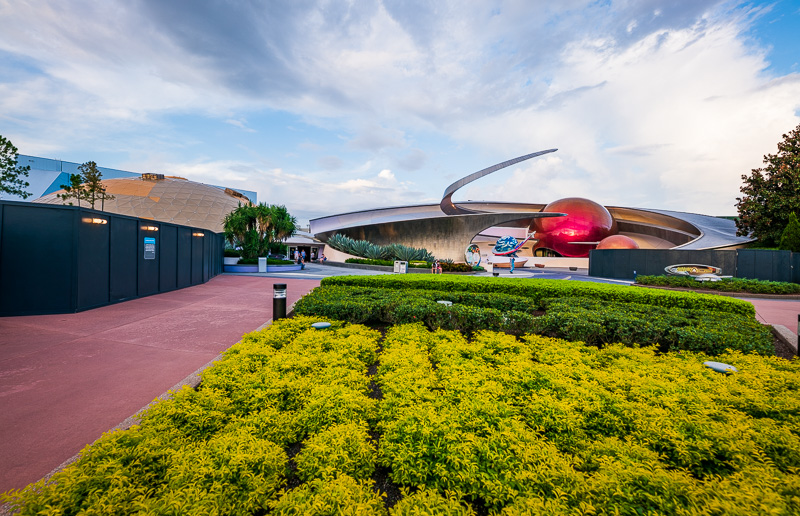 Over on the other side of Future World, we have a photo that kills two birds with one stone, showing the low crowds around Mission Space and also the roof progress on the Play Pavilion.

Guardians of the Galaxy: Cosmic Rewind is also progressing nicely. I haven’t noticed any changes around Space 220 Restaurant. I’d be shocked if that opens before Spring 2021. 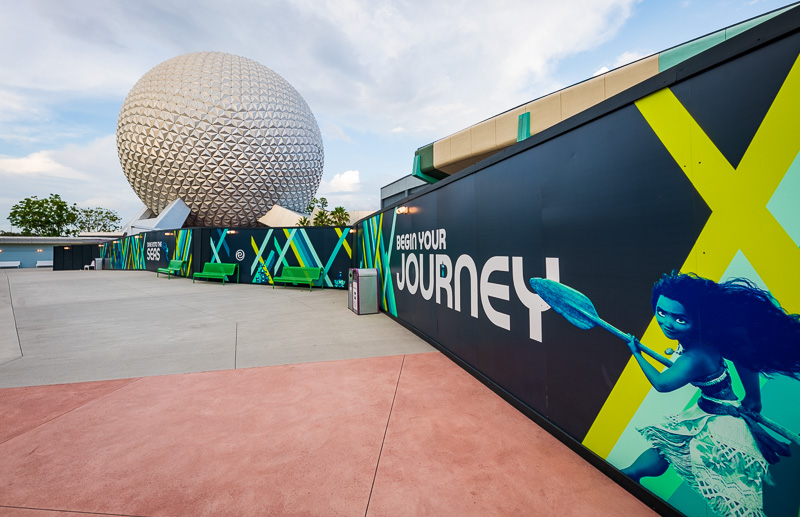 There still hasn’t been any official word as to the status of Moana’s Journey of Water. That’s probably because of the aforementioned overhaul to the plans (and budget).

My guess is that there’s about a 50/50 chance of this happening. The walk-through doesn’t seem particularly costly, so it probably depends more on what Imagineering opts to do with the still-standing Innoventions building. Maybe the “Moana Makeover” of the Poly is our consolation prize? 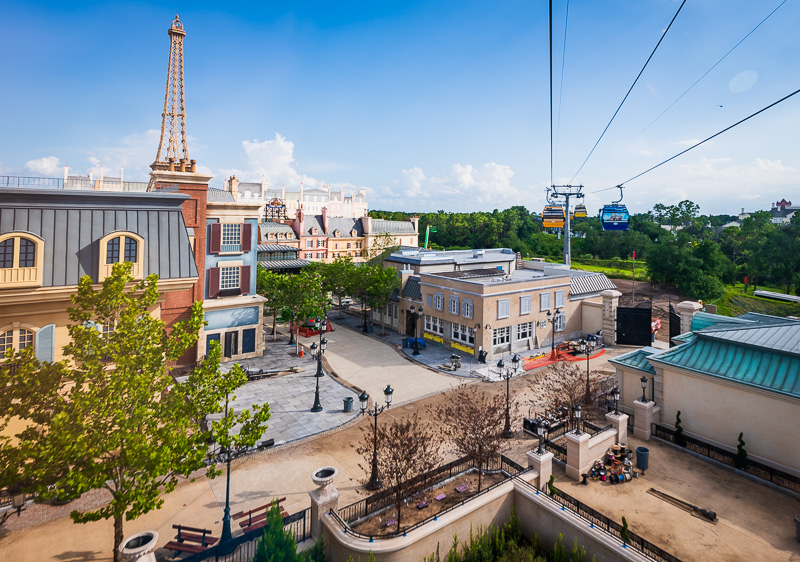 Finally, let’s take a Skyliner ride to check out the progress on the France expansion and Remy’s Ratatouille Adventure.

Not a ton has changed here since we last did this a few weeks ago. Some incremental progress, but nothing major. 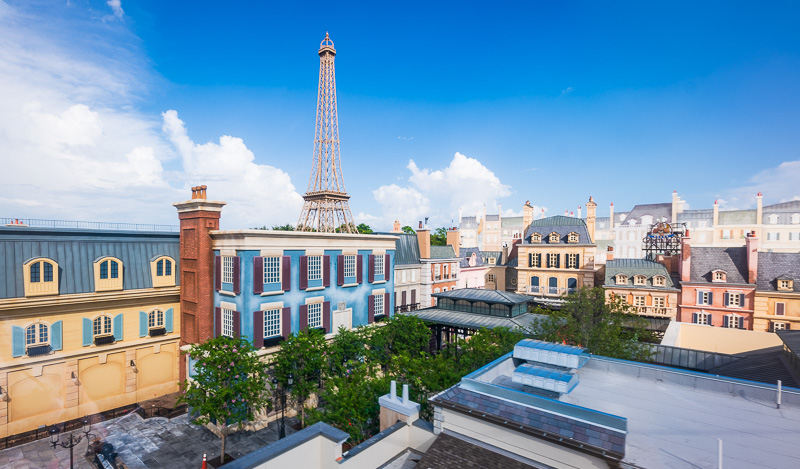 There’s no reason to believe this couldn’t be finished by October 2020 if Walt Disney World wanted it done by then. They don’t.

Unlike our criticism of the park hours decision, we wholeheartedly understand and agree with Disney’s decision to delay this project. 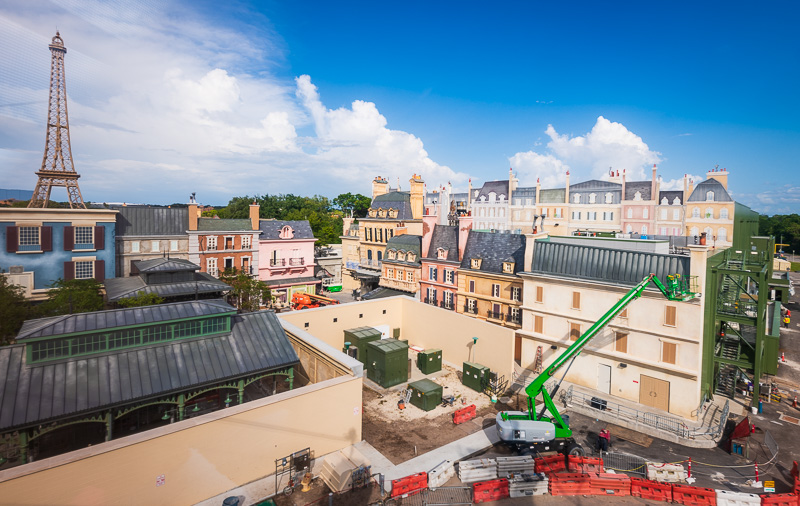 There’s no advantage to opening Remy’s Ratatouille Adventure in December 2020 (the next logical date from a marketing/guest draw perspective). That’s not going to move the needle on people booking trips, and will only add staffing costs and operational headaches to a reduced capacity park.

Basically, there’s no upside to opening Remy’s Ratatouille Adventure–or anything else major, for that matter–in the near-term future. Add to that the reality that 2021’s major projects are probably delayed and it makes sense to hesitate on this. Open the expansion when it can be fully marketed and have the splashy impact as previously intended. My best guesses as to when that might be able to happen are early March 2021 or Memorial Day Weekend 2021.

What are your thoughts on EPCOT’s reduced operating hours in the evenings? Would you prefer more time in the mornings or at night? Thoughts on crowds, changes, or anything else covered here? Are you excited for all of the coming additions to EPCOT? When do you predict that Remy’s Ratatouille Adventure will open? Do you agree or disagree with any of our thoughts? Any questions we can help you answer? Hearing your feedback–even when you disagree with us–is both interesting to us and helpful to other readers, so please share your thoughts below in the comments!