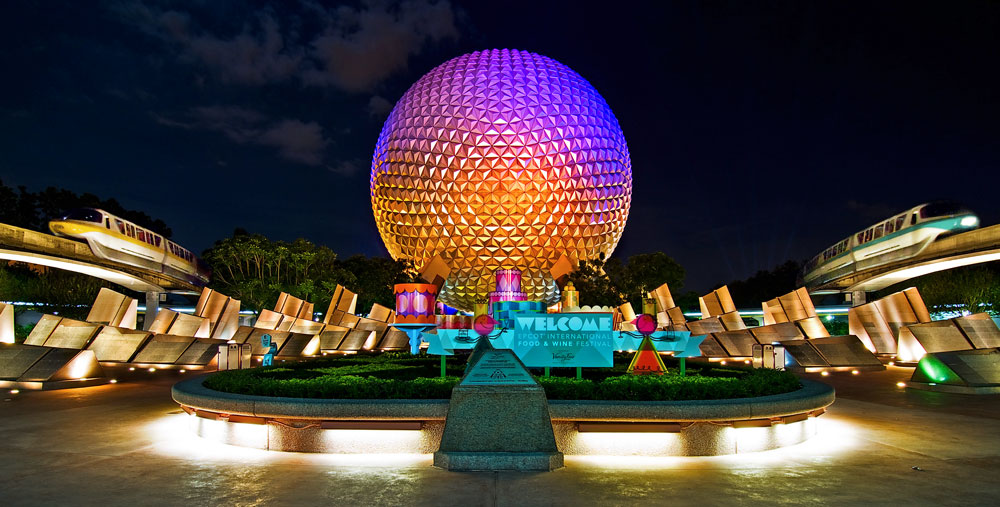 For the Walt Disney World photo I’m sharing today at the bottom of this post, titled EPICOT VI: Dueling Monorails, a little history is in order. This is my sixth version of the same shot concept, which is a follow-up to one of my favorite photos ever. If Jaws 6: Jaws in Japan and Rocky V taught us anything, it’s that you don’t really hit your stride until the 5th or 6th installment. Err…uhh…on with that history…

The above photo, titled EPICOT!, is the original version and one of two shots (the other being my first SpectroMagic long exposure) that helped “establish” me as a Disney fan-photographer back in my early days of Flickr. It was the combination of this Walt Disney World trip with other photographers and the popularity of this photo that really motivated me to think of ways to push the creative envelope.

I had it on my shot list before that trip after seeing this iconic EPCOT Center photo in one of the books in My Disney Theme Park Library, but I quickly realized it would be impossible to get a similar photo because it’s not simply a matter of timing–that photo was of two parked monorails set-up for a publicity shoot. Still, I churned my brain to see if I could think of a way to get something similar. Perhaps compromising and getting only one monorail with a modified composition.

In talking to Joe Penniston, one of the other photographers on the trip, something he said made it dawn on me how this shot might be possible. He had an idea for a dramatically different shot, but by using the technique he mentioned, the shot would at least be theoretically possible. My mind starting spinning. It was an idea that would certainly be easier during the daylight hours, but being obsessed with night photography at that time, I decided to go for the more technically challenging shot.

With the camera technology of the day then (namely, grainy high ISOs), I had to really compromise and fudge things to come up with settings that, I thought, would work. I only had one crack at the photo, so I simply hoped those settings were correct–or close enough–and shot away as the monorail passed. 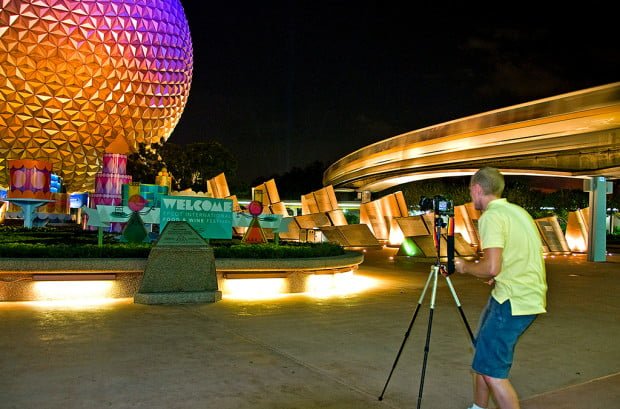 By the time I set out to take the original shot, I had been talking about it all day to Sarah, and knew exactly what technique I was going to use to capture them both. Sarah thought to take a “behind the shot” photo of me with her camera.

The photo took a lot of editing, but even after trying “sequels” to this photo, the original remained my favorite. That is, until I took the shot at the bottom of this post…

The big reason why I say this helped establish me is because it was my first photo that made the Front Page of Explore.

At the time, making Explore was a really big deal and hitting the front page was even bigger. Think of this as a dorky photographer’s version of going viral in an era before that was really a thing.

Not being totally satisfied with the Food & Wine Festival display in the first photo, I got close to the non-seasonal flower bed for my second try. Even though I like this perspective better, I prefer the original.

That same night, I also waited for the Tronorail (remember that?!) and captured one of it.

By the following year, I felt the original had been done to death, and I wanted to bring something new to the table.

I tried what I dubbed The Incrediblesorail that featured an elastic-like monorail. (Get it? An elastic monorail like Mrs. Incredible.)

For a while, I had wanted to do a daytime version of the shot, but this is almost impossible since there are regularly two PhotoPass photographers in this spot during the day, and they monopolize the location. The above shot wasn’t really my finest work, taken in the middle of the day with a dull sky, but it was the best I could get given the circumstances…

I finally had my own chance to do the shot the “right” way a la the publicity photo that had inspired me, and I captured a sunrise version of the photo in a shoot commissioned by Disney. After this, I gave up trying again because, as someone really creative once said, “you can’t top pigs with pigs.” Or, in my case, you can’t top pigs with squirrels.

Then, on our most recent Walt Disney World trip, an idea hit me… 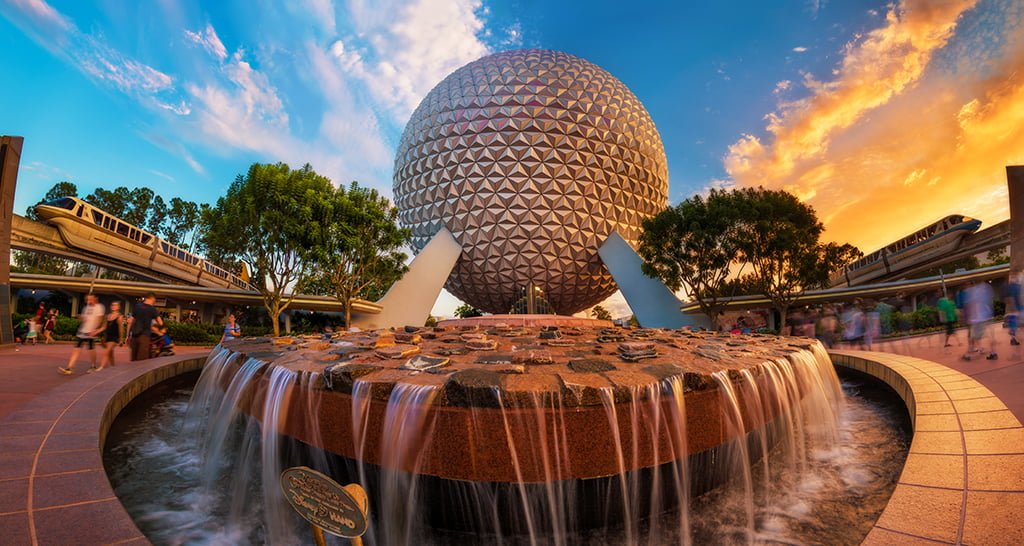 For a while, I had wanted to capture a sunset version of the photo with a colorful sky. Unfortunately, that was not possible due to the aforementioned PhotoPass photographer problem. I also wanted to capture a version from a different location, namely, closer to Spaceship Earth to cut out the ugly tombstones. Unfortunately, that was not possible because my widest fisheye lens was still not wide enough to get close and still capture both monorails.

Prior to this trip, it dawned on me how I might simultaneously be able to make both versions a reality, simultaneously. I won’t bore you with the technical details, but suffice to say, it was a very difficult and time intensive photo to pull off. Apparently, this fountain is a popular location for kids to run around on in circles right around sunset, but if you stand in this spot with a tripod for any amount of time, other guests will ask you to take their photo.

Overcoming all of these on-site challenges was itself a tough task, and I came really close to totally missing the shot due to all of the people around. At the time, I actually thought I was giving up when I moved on from this location, as I thought another guest did block the shot. Only after getting home did I realize I had something I could work with. Ironically, I actually had more than that, and I could have had a shot totally devoid of people. For this finished photo, I decided to keep the people in the frame, as they make the park feel alive, and also hint at the challenges of taking this photo when the park is open.

Ultimately, it was worth the time and effort, as EPICOT VI (it almost sounds like “EPCOT Center” with a thick Russian accent…maybe?) probably goes down as one of my favorite Epcot photos that I’ve ever taken. The first EPICOT! shot is still my absolute favorite for sentimental reasons, but I like this photo more. I hope you’ll take the time to click on the photo and view it larger and in higher resolution on the photo’s page itself.

Any thoughts on these photos? Have a favorite version? Other feedback or thoughts? Any questions we can help you answer? Hearing your feedback–even when you disagree with us–is both interesting to us and helpful to other readers, so please share your thoughts below in the comments!