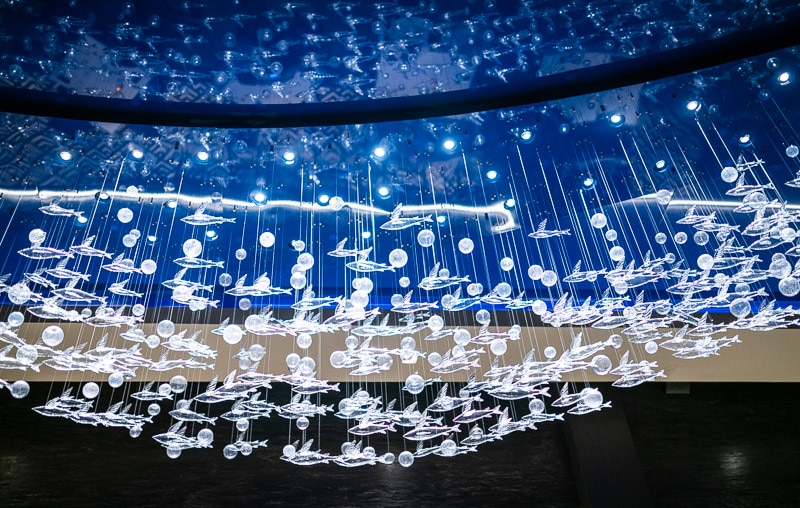 As Walt Disney World’s phased reopening has dragged into its second year, a slew of Signature Restaurants at the resort hotels recently returned. The most recent fan-favorite table service additions to the culinary lineup include Jiko at Animal Kingdom Lodge and Flying Fish on the BoardWalk.

Both of these have been mainstays on our list of Top 10 Table Service Restaurants at Walt Disney World for the past decade. We had just dined at Jiko prior to closure (so soon before that we didn’t have a chance to publish the review!), and that meal solidified its #5 ranking.

By contrast, it had been a while since our last meal at Flying Fish. Despite no new menu or material changes (beyond a few scattered items here and there–routine refreshes), we thus thought it’d be worth revisiting that Signature Restaurant at Disney’s BoardWalk Inn. Let’s take a look at how the recently-reopened Flying Fish holds up…

For starters, although Flying Fish is located at Disney’s BoardWalk Inn, it’s incredibly easy to access. It’s in the Crescent Lake Resort Area, which means it’s walkable from Epcot’s International Gateway. It’s about 10 minutes from the Epcot Skyliner station or 15 minutes from France or the United Kingdom pavilions, give or take.

That means anyone visiting Epcot or staying at BoardWalk Inn, Yacht & Beach Club, Swan & Dolphin, Caribbean Beach, Pop Century, Art of Animation, or Riviera Resort have easy access to Flying Fish. It’s on par with the best Signature Dining at any of these resorts or any restaurants that are open in World Showcase right now. 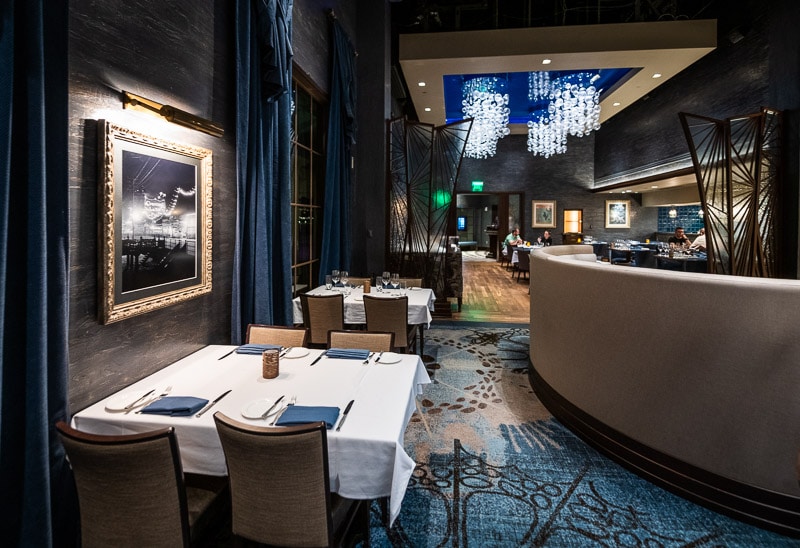 Long-time Walt Disney World fans will likely recall that Flying Fish was reimagined “recently.” (Did a double-take upon realizing it was actually over 5 years ago. Time flies when you’re eating fish, I guess.)

Prior to that, it had a Coney Island theme, with a carnival motif–right down to the circus tents in the back of the restaurant. While this was ostensibly turn-of-the-century boardwalk themed, it had a definite 1990s vibe to it. 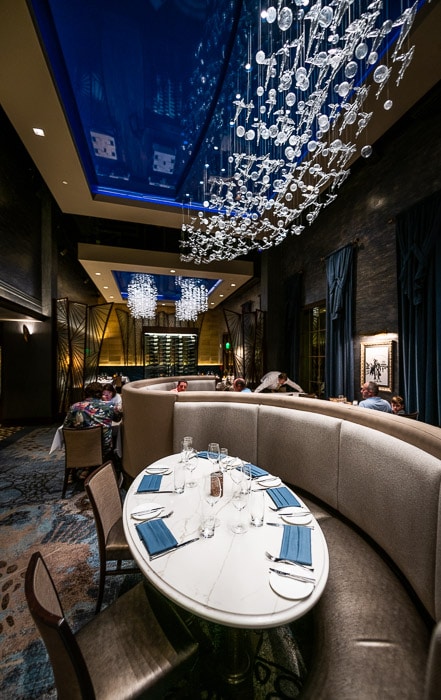 As with all Walt Disney World changes, the reimagining of Flying Fish (Cafe) was controversial. For our part, we worried that the restaurant redesign would over-correct this and turn Flying Fish into a generic fine dining restaurant to appeal more to the non-Disney convention crowd.

However, when the actual new-look Flying Fish reopened, we praised the design for balancing an upscale aesthetic with plenty of thematic flourishes. I’d double-down on all of that now. The modernizations have held up well and are still a good mix of theme and style, whereas the old look appears even more dated in photos now.

When it comes to Walt Disney World changes, I think time has a way of healing wounds and changing minds. At least, some of the time. You’ll never convince me that the current Journey into Imagination is better than the original, or even that ditching bed runners makes rooms look better. But I digress. 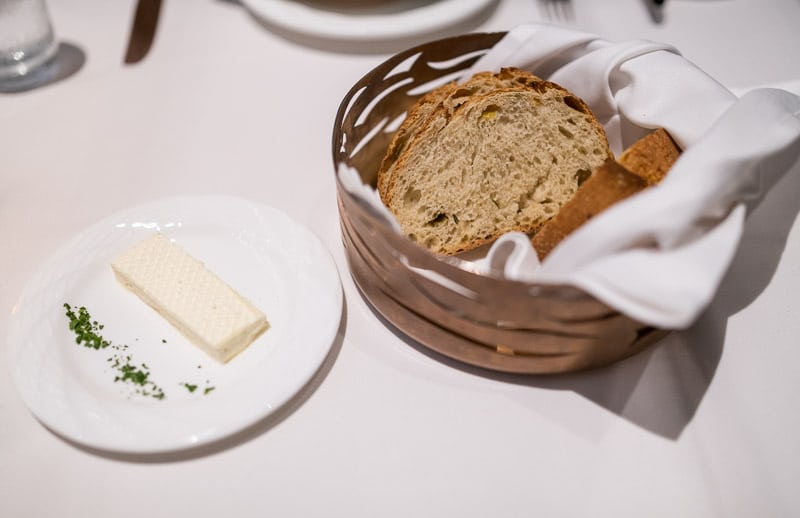 Our server started us off with locally-baked bread with roasted garlic butter. The bread was fresh and doughy, with a thick and crunchy crust. The butter had a thematically-fitting scaly texture and was topped with chives and sea salt. Flying Fish’s bread service is nothing revolutionary or iconic, but it’s definitely high quality.

Since we’re anything but professional reviewers, who would presumably pace themselves and maybe just have a slice or two of bread each, the two of us devoured an entire basket-plus of this bread. Definitely not thinking of the long game–but I blame Flying Fish for not putting desserts on the main menu. (How can I be held accountable for how much I choose to consume?!) 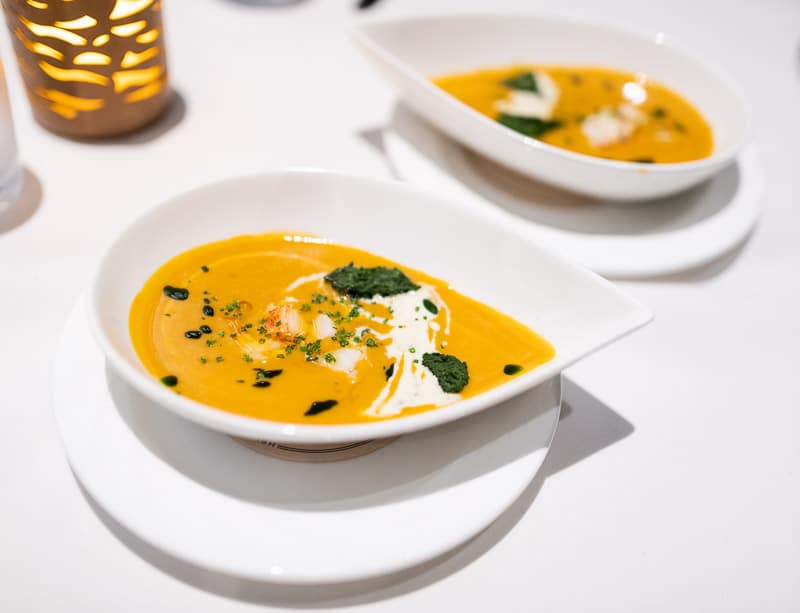 We both started with the Lobster Bisque: Sambuca, Chive Oil.

The “goal” with this meal was ordering the most iconic Flying Fish menu items. Various versions of bisque have been menu staples for years, with this being very similar to the Blue Crab Bisque. This isn’t quite as artful as that, which was beautifully finished with a tarragon crème fraîche, but it’s equally delicious. As with that, it’s rich but not overly heavy, and hearty chunks of lobster throughout.

If you’re not in the mood for Lobster Bisque, you cannot go wrong with the Slow-roasted Pork Belly. I’ve had that a couple of times and it always delivers. (Our server also recommended the newer salads, but that’s a tough sell for me at a Signature Restaurant.) 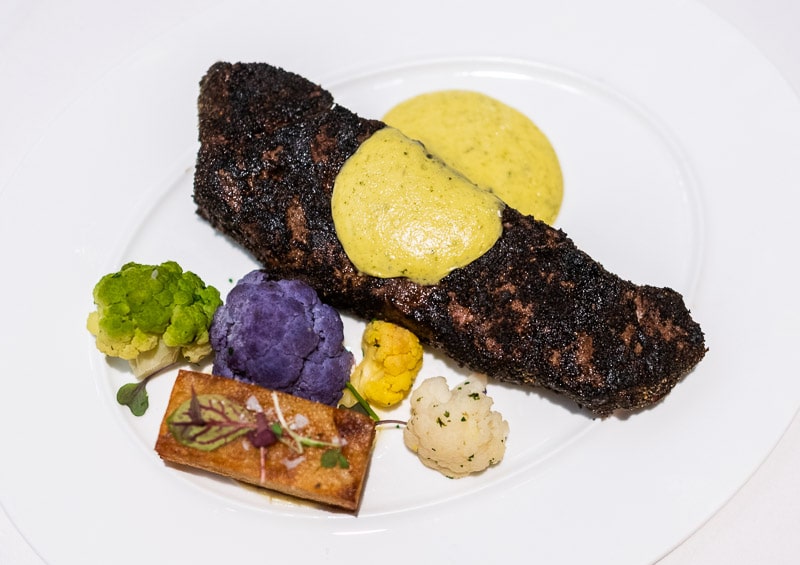 For our first entree, we had the Char-crusted New York Strip: Mille-Feuille Potato Gratin, Cauliflower Colors and Béarnaise Sauce.

With a brief two year exception, this Char-crusted New York Strip Steak has a menu mainstay at Flying Fish since it opened in 1996 as a circus-themed cafe. It’s been a fan-favorite entree since the beginning, and one of two go-to items that everyone seemed to adore.

That brief exception was back when Flying Fish returned from its reimagining in 2016-2017. At that time, the Char-crusted New York Strip Steak was dropped from the menu, replaced with a more “upscale” Snake River Farms Wagyu Strip Loin costing $55. (Pictured above.) That Wagyu Strip Loin was good, but nothing special.

There was a decent amount of outrage over this (albeit nothing compared to the recent ‘Ohana Noodlegate), and the iconic Char-crusted New York Strip Steak was added back to the menu in early 2018. I don’t have pricing in my notes from then, but if I recall correctly, it was just under $50. I do know that shortly before the reimagining in 2015, the Char-crusted New York Strip Steak cost $47. 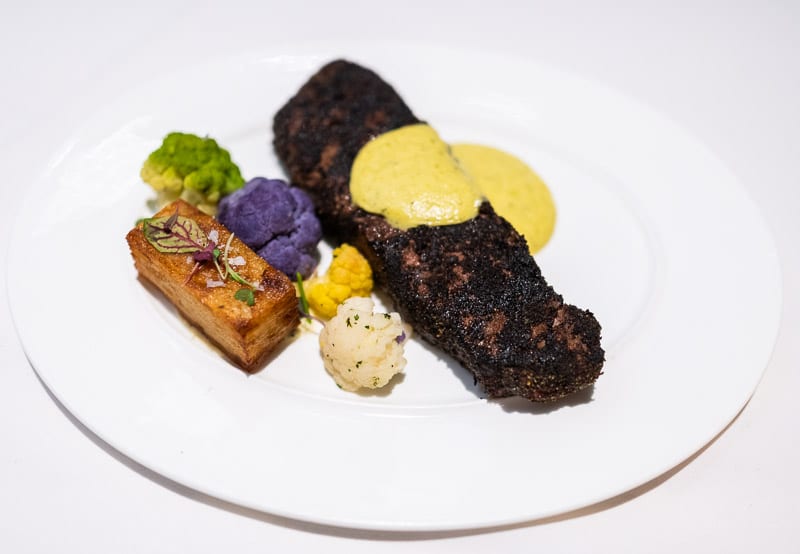 While this blog doesn’t typically address menu prices since they’re akin to a roller coaster (well, at least the lift hill), this feels noteworthy since steak prices have skyrocketed in the last year. Percentage-wise, that price increase is far less than what the CPI shows for beef since Flying Fish closed (over 9% in each of the last two years).

This is not to give Walt Disney World “kudos” for showing restraint in price increases. Rather, it’s to underscore the reality that increased input costs don’t necessarily equal menu price increases. As always, Disney charges what the market will bear–markup is not set at a certain percentage above costs. Perhaps Disney has realized there’s a ceiling on their ability to pass on higher prices to consumers without seeing a corresponding drop in demand.

Stated a bit differently: high-end table service prices skyrocketed when inflation was minimal, but are comparatively flat while inflation runs rampant. Meanwhile, counter service and mid-tier table service menu prices are up noticeably–as are “impulse buys” and snacks. (If anything, the point of this tangent is that Walt Disney World is increasing prices where they are not out of financial need, but because they can get away with it.) 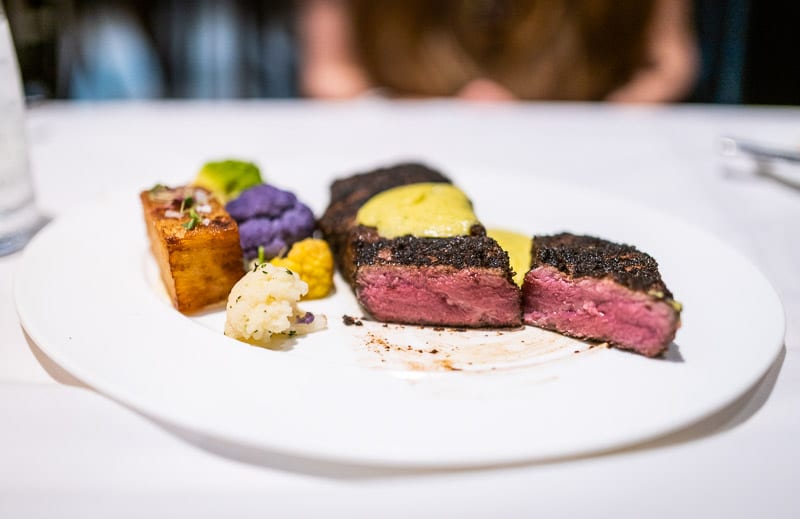 But you’re probably here to read about how the Char-crusted New York Strip Steak tasted, not some blogger’s take on economics. (Stick to Disney, as they say.) As always, the Flying Fish signature steak is absolutely fantastic. There’s a reason it’s been on the menu for the better part of three decades.

Flying Fish’s Char-crusted New York Strip Steak has never been the most tender cut of meat, but what it lacks there it makes up for in size and flavor. The charred exterior provides tremendous texture and smokiness, giving way to a savory, perfectly-prepared interior.

This is a rich dish–a steak lover’s steak, with a meaty flavor that’s further enhanced by the thick and tangy bernaise sauce. All of that probably sounds like nonsense. Saying meat has a “meaty” flavor and that steak lovers will love this steak sounds redundant, but if you know, you know. 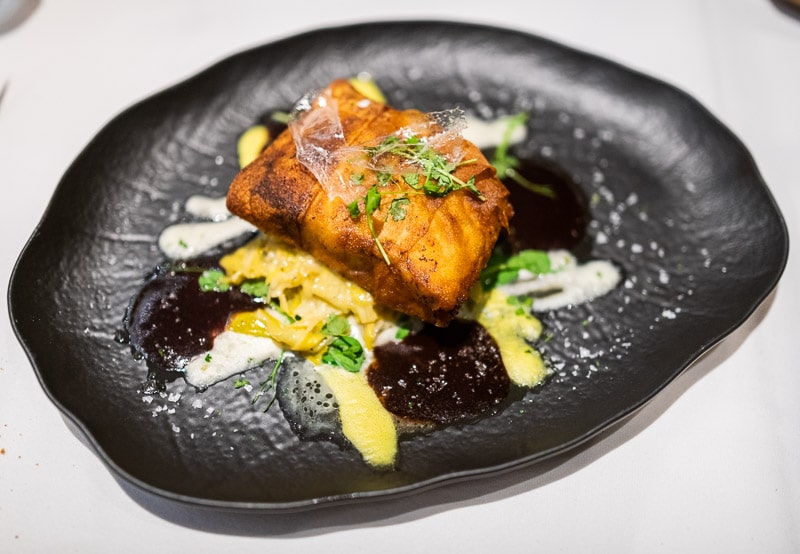 For our second entree, we opted to once again “kick it old school” (as the kids say) and order the Potato-wrapped Red Snapper: Leek Fondue, Cassis-Red Wine Reduction.

This is another one of Flying Fish’s iconic entrees. It’s been a menu mainstay for at least as long as we’ve been visiting Walt Disney World as adults, perhaps longer. It wouldn’t surprise me if it’s another opening day original, but I’m not quite sure of that. 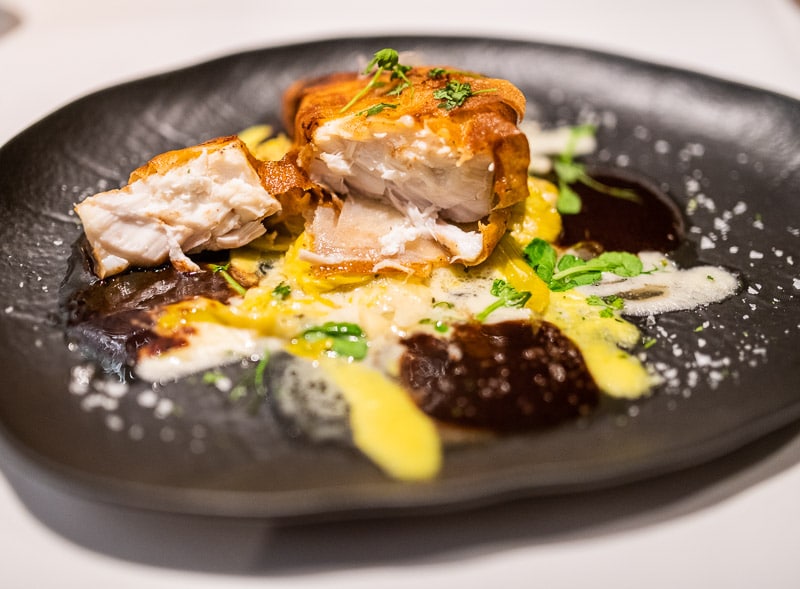 For a number of years, there was actually a “Signature Flying Fish Chef’s Duo” that included partial portions of this snapper and the aforementioned steak. (If I recall correctly, this was right around $50 before the reimagining.)

This was a fantastic pairing, and I really wish they’d bring it back. For those intimidated by the steaky meatiness of the meaty steak, it was a great option. 😉 The duo worked well together, with the lighter fish balancing the rich char-crusted steak. 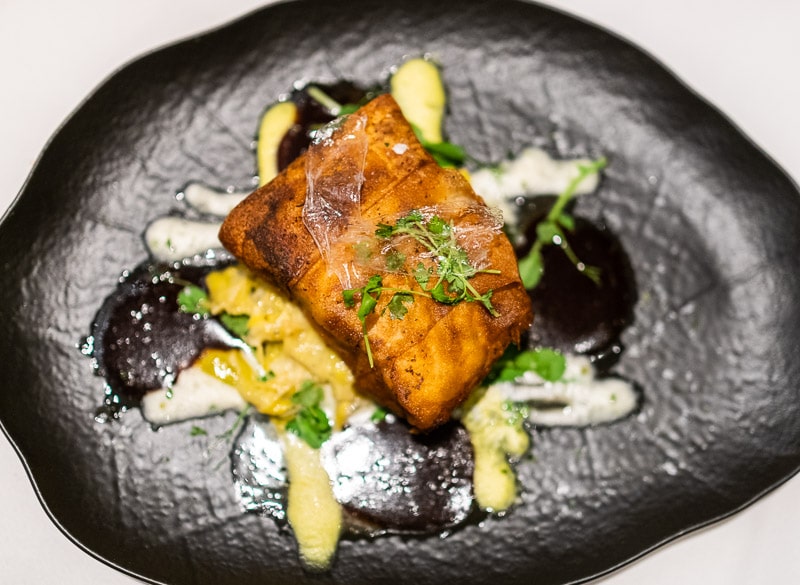 We thus decided to do our own version of the duo; Sarah shared half of the snapper and I shared ~25% of the steak. (Not because I don’t like to share–although I don’t–but because that’s all she wanted.) I take pride in my carnivorous ways, but I’m not sure I could’ve eaten the entire steak.

Anyway, the Potato-wrapped Red Snapper was likewise delicious. The light sweetness of the red snapper contrasted nicely with the punch of the potato crust, both texture and flavor-wise. The selection of sauces underneath further elevated the fish. Perhaps it’s just me, but I often steer clear of snapper as it’s usually too mild; this dish was not. It’s bold and inventive–and not just in a ‘hit you over the head with flavors and drown the fish in heavy sauces’ way. It had nuance and depth. 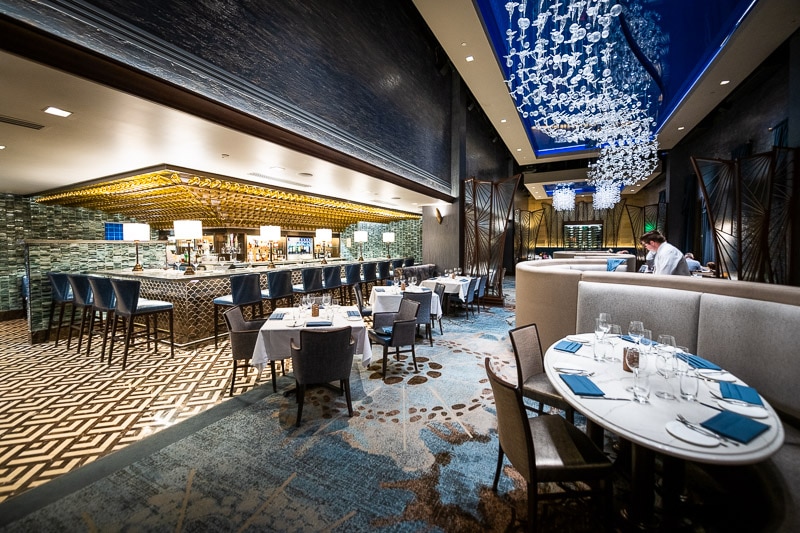 This DIY duo at Flying Fish is the best 1-2 entree punch we’ve had at Walt Disney World in a long time. To once again quote the youth, “name a more iconic duo.. we’ll wait.” Seriously though, I’m not sure there’s a better pair of entrees at any Walt Disney World restaurant.

They were not as inventive or envelope-pushing as our entrees at Citricos, or as good of a value as many other restaurants, but it was a very satisfying meal–better than any of those. So much so that we didn’t have room for dessert; that was unfortunate, as we really wanted to try the Creamy Goat Cheesecake. 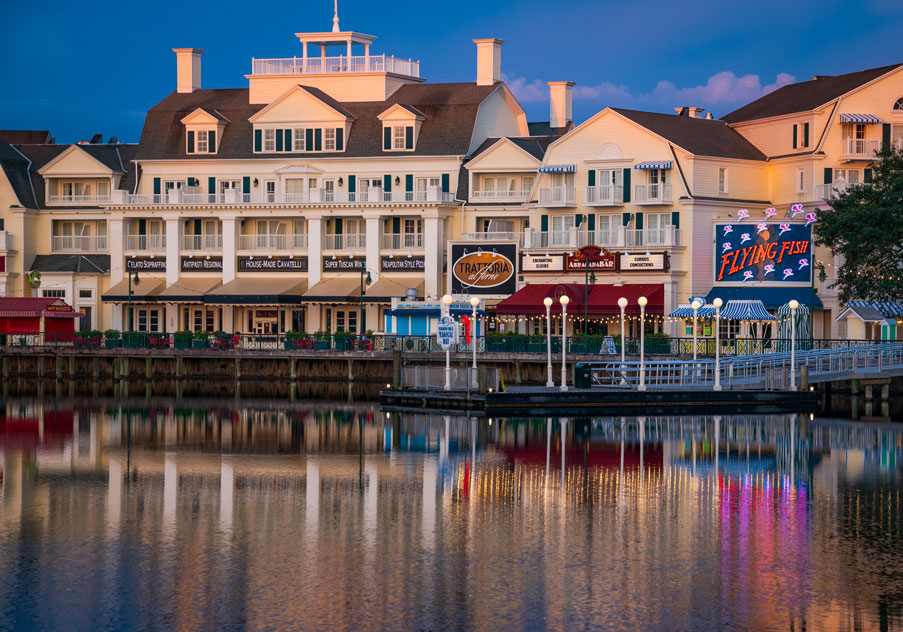 Ultimately, one of the things I’ve always loved about Flying Fish is that it’s simultaneously fancy but approachable, with ambitious and inventive menu items that are also comforting, tried and true favorites. This is a bit unlike several of the best Signature Restaurants are Walt Disney World, some of which are more intimidating and cater less towards regular guests.

In this regard, Flying Fish is most reminiscent of Topolino’s Terrace – Flavors of the Riviera (or rather, that is reminiscent of Flying Fish, since it’s older) than most other Signatures. Both have tremendous range, from crowd-pleasing fare to haute cuisine. Both are bright and airy at opening, transitioning to moody and romantic as day changes to night. Both are suitable for families early in the evening, and perfect for date nights at the end of the night.

This meal at Flying Fish confirmed how we’ve always felt about the iconic BoardWalk restaurant, further solidifying its spot in our top 5 table service restaurants at Walt Disney World. Whether it overtakes Topolino’s Terrace for the (temporary) top slot remains to be seen–we’re probably due for another research visit to Disney’s Riviera Resort. Either way, Flying Fish is a strong performer and absolutely belongs on your short list for a fancy family splurge meal, romantic date night–or whatever special occasion you might have during your next Walt Disney World trip.

Have you dined at Flying Fish since it reopened? Thoughts on the menu’s mix of familiar favorites and ambitious additions? Are you a fan of the Char-crusted New York Strip or Potato-wrapped Red Snapper? Wish they’d bring back the Chef’s Duo with both–or any other older menu items? Are you on board with the look of the “recent” reimagining, or do you prefer the old carnival-themed Flying Fish? Do you agree or disagree with our restaurant review? Other thoughts or concerns? Any questions we can help you answer? Hearing your feedback–even when you disagree with us–is both interesting to us and helpful to other readers, so please share your thoughts below in the comments!