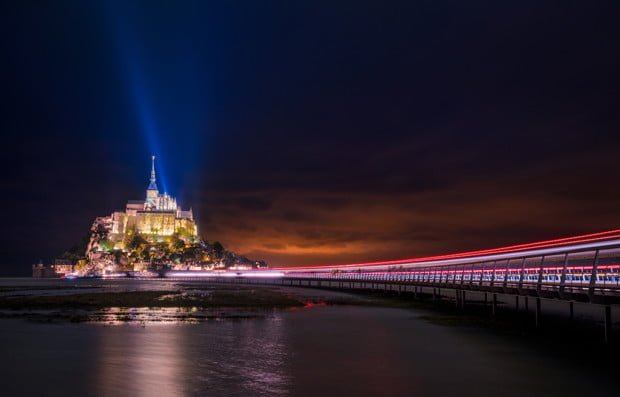 In this trip report, we’ll cover our Epcot-inspired stops throughout Europe, plus the inaugural Disneyland Paris Half Marathon. Our trip to France for the Disneyland Paris Half Marathon actually started several weeks before the race. In fact, the story of our incredible adventure starts about 20 minutes after California’s Disneyland Half Marathon, when Sarah picked me up in our fully-loaded (with our stuff–not boasting that our tricked-out Kia has A/C and power windows…BUT IT DOES) car and we started the long drive to Indianapolis.

The reason for doing this was mostly our kids, Walter Dogsney and Yossarian the Cat. In the initial stages of planning our fall travel, we realized we wanted to do Florida and France, and we could combine these trips and use fewer miles for booking the flights. It would also put us away from home for a long time. Given that I would also have to head to Indianapolis for work at some point in the fall, it just made sense to drive home to drop them off there to stay with Sarah’s mom.

Walter probably would’ve been fine staying in California. The workers at the kennel love him, and bought him a ball that he gets to play with when he’s there. I’m pretty sure that ball is priority #1 in life for him, with Sarah being a close #2. Licking windows is a distant #3. Not that you care about any of this, but I figure I might as well give you a strong dose of the irrelevant, rambling anecdotes that are the hallmark of these trip reports, so you can get out and save yourself before it’s too late.

Still with us? Okay, well don’t say I didn’t warn you. Fast-forwarding past our long drive from Southern California to Indianapolis and subsequent stopover in Orlando, we arrived in Paris’ Charles de Gaulle airport.

Upon landing in Paris, we had our first encounter with a social club member. Who knew they had these outside of Disneyland?! 😉 After a quick turf war over Redd Rockett’s Pizza Port, we met up with our friend Mark Willard, who would be joining us on the trip. He arrived to the airport shortly after we did, and we jumped in our rental car and headed north. 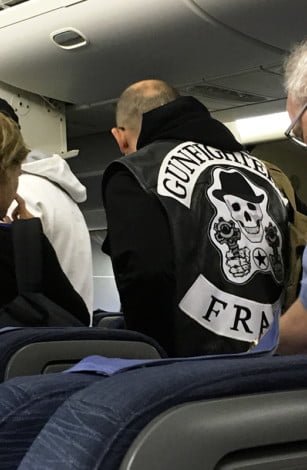 Our first stop was the place about which I was most excited on the entire trip: Mont Saint Michel. For those unfamiliar, Mont Saint Michel is a rocky tidal island with a monastery and small town situated inside fort-like walls. During low tide, it’s connected to “mainland” France. During high tides, access is cut off, and the walls protect the buildings inside from the rising water.

When you think about it, it’s a bit baffling Mont Saint Michel has not been the setting for a Michael Bay film starring Nicolas Cage as a time-traveling special forces operative and Sir Sean Connery as a British spy woking undercover as a monk. The script practically writes itself. 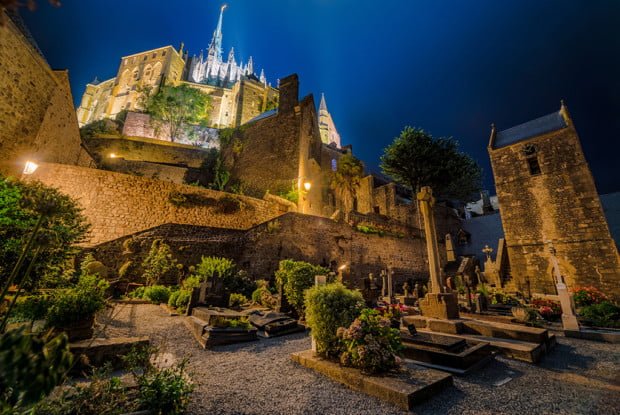 But Michael Bay films are not what inspired us to visit Mont Saint Michel. An Epcot film did. There’s a reason I’m such an ardent defender of EPCOT Center’s original, lofty ideals, and it’s because they have piqued my curiosity and inspired me. As a kid, I read about manatees voraciously (and even “adopted” one) after learning about them at The Living Seas.

As an adult, travel plans and goals have been inspired by World Showcase. I didn’t even know Mont Saint Michel existed until seeing it in Impressions de France, and it has been a travel bucket list item since. Sarah still remembers me telling her that someday we’d go there.

She laughed it off at the time, but I still wanted to go when we first visited France (and first traveled internationally) in 2012. Unfortunately, without a car, getting there was impracticable during that visit. 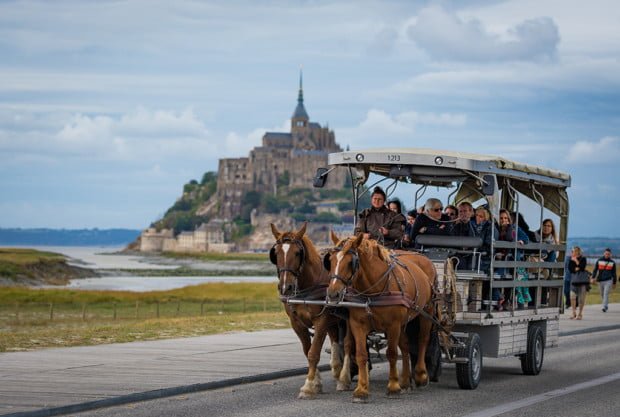 This time, the trip was basically planned around a visit to Mont Saint Michel. I had consulted their online tide charts to visit at time when the tide would be at its highest, and we planned on renting a car for a couple of days to facilitate a visit.

Eventually, we decided to just rent a car for the duration of the trip, picking the car up in Paris and doing a one-way rental to Munich. This is the first time we’ve rented a car when traveling internationally (Canada aside), and–with one exception–I’m really glad we did. Normally, I prefer to rely on public transit, and that has mostly worked, particularly in Asia, but for this trip, it enabled us to visit many places we otherwise couldn’t.

Below is the dream-machine in which we’d be spending 37.6% of our trip. (People may knock station wagons, but this car was actually pretty great!) 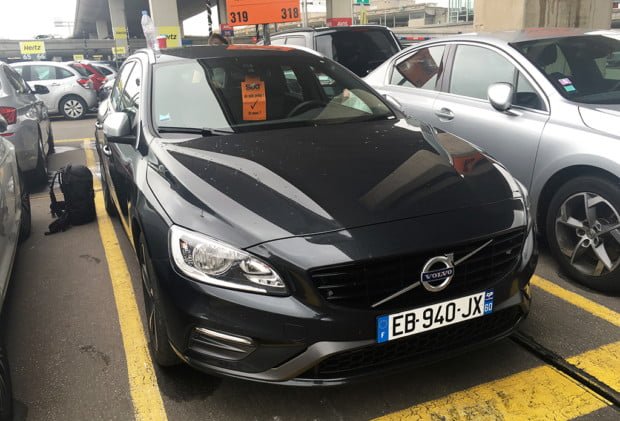 Driving in another country is definitely an intimidating prospect, but I think it was worth it. Then again, I was not the one who had to do the driving, so my perspective is a bit skewed. For me, the rental car was essentially just a private train. Except in this case, I had the added bonus of being able to critique the “conductor’s” navigational decisions. You’re welcome, Mark.

The drive from Paris took a few hours, and took us through France’s countryside. As we neared our hotel, we were met by a gate that required an access code. We quickly realized this was the only means of accessing our hotel, and that we were supposed to contact the hotel 24 hours in advance to request a code. Oops.

I scrambled to call the hotel, and we had a code after a delay of only a few minutes. The hotel–Le Relais Saint Michel–was located a short walk from Mont Saint Michel, and after dropping off our bags, we started towards the island.

I had been envisioning this place in my head for years, and I was a bit worried it wouldn’t live up to my expectations and beautifully-filmed footage in Epcot. Those concerns were vanquished pretty quickly the instant I saw it in person. It was everything I had imagined…and much more, actually. 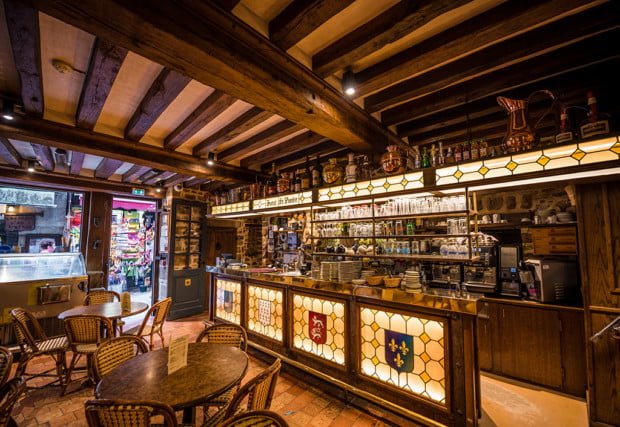 That much more came in the form of the depth of the local community within the walls of the island. The cobblestone streets lined with quaint little shops were my first exposure on this trip to “old world” Europe, and it was a great experience. We dined at Auberge Saint-Pierre, electing to skip the heavily-hyped (and 30€!) omelets for which Mont Saint Michel is known, and then wandered up towards the monastery for a bit.

After scouting potential photo locations for a bit and finding something that seemed like it would provide a good, safe vantage, we headed back towards the island. When we got back, we noticed the water was rising–and quickly. The water was racing like a river inland, swallowing more land with each second. 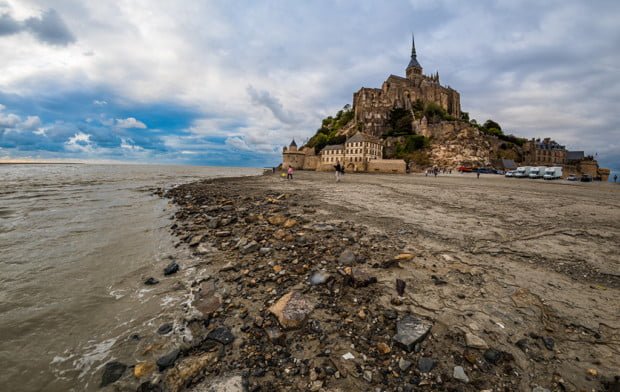 This was amazing to see, and just standing there, watching this giant rock commune become an actual island in front of my eyes easily ranks as one of my top travel experiences. It was incredible.

I don’t know what we expected. We knew it would happen, and the water would have to come in pretty quickly to cover all of that land in such a short amount of time, but knowing something will happen and seeing it happen are two totally different things. In any case, we decided to call an audible, and just stay up near the edge of the bridge to watch the water completely cut off access. It was too cool of an experience to pass up.

Of course, I was taking photos like crazy. Even though I knew the shots with large swaths of pavement in the foreground wouldn’t make for good photos, I felt compelled. I set up my tripod near the water, and figured I’d grab a couple of photos before the armed police officers nearby forced everyone behind the safety barricades they had set up on the bridge.

I was totally in the zone at this point, and I failed to jump back before the water got one of my shoes wet. I had only brought one pair of shoes on the trip, so this was a bit troubling.

Then, an odd thing happened…while everyone else filed behind the barricades, the police said nothing to me. (I assume it was one of those, “you’ve been warned, dummy” situations.) I had a totally clean view of Mont Saint Michel, and a dilemma: do I get soaked to get the shot, or do I play it safe?

If you’ve read any of my adventures in photography, I think you probably know the answer to this is a foregone conclusion, and it was not really a dilemma in any way whatsoever. Fifteen minutes later, my jeans and both shoes were totally soaked as the waves were hitting my knees. I regret nothing.

That’s the end result of my efforts. Or, at least, the photo I like the most. I stood in the water for a little over 30 minutes, from just before sunset until the blue hues of dusk peaked and took photos pretty much nonstop the entire time. (I’ll edit others later.)

This photo was taken towards the end, and while the sky had a lot more color in it around sunset, I prefer this one. (Please click on the photo above to view it larger and in high-resolution on my SmugMug page.) 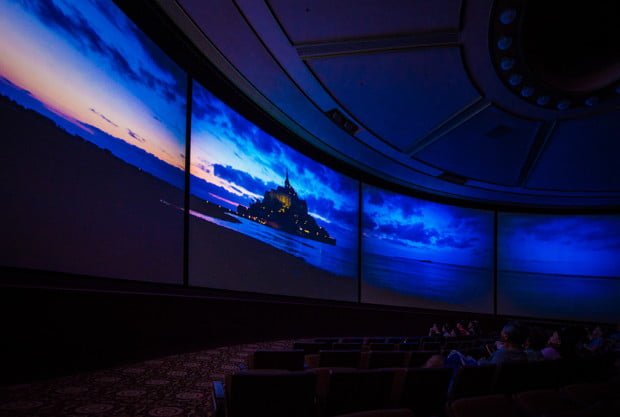 As silly as it might sound, this scene in Impressions de France is why. Whenever I’ve mentally pictured Mont Saint Michel, it’s always been at blue hour–like in this scene.

It may not be the best or most dramatic photo I captured of Mont Saint Michel, but it’s the one that most closely approaches the romanticized notion of the scene that existed in my head prior to visiting. I suppose I’m sentimental, but that’s what matters most to me. 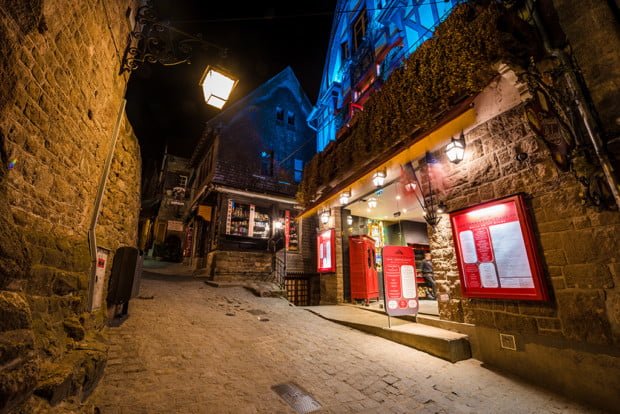 Anyway, we headed back to the “safe” spot we had scouted earlier in the day for a different perspective, only to find it under about 8′ of water. Good thing we didn’t bank on that perspective. After about an hour we headed towards the island again, and with access restored, headed inside the island walls for some night photos of the small village and grounds of the monastery.

Since I don’t know what the interest level is on any of these non-Disney spots, I won’t go into excruciating detail here. I have another post on TravelCaffeine that does that, with additional photos, tips, and other thoughts on Mont Saint Michel.

Suffice to say, the next morning for sunrise was more of the same…including my shoes getting soaked as I faced the “dilemma” once again. On the plus side, I did “learn” a little, and wore shorts that morning instead of taking another pair of jeans out of commission for the rest of the trip. Above is a photo Mark took with his iPhone of me once again setting up shop in the water.

That covers about the first 24 hours of our trip, plus some of the background, so I think I’ll wrap up part 1 of this trip report here. I’ll probably pick up the pace in future installments as I know this is only tangentially Disney, and perhaps not the type of content most of you come here to read. (I’m still trying to gauge what level of detail is right for this report, so please share your feedback in that regard…)

Our next stops after leaving Mont Saint Michel were the village of Beuvron-en-Auge and Étretat. We’ll cover both of those in Part 2 of our Impressions de Bricker France Trip Report.

What do you think of Mont Saint Michel? Have you ever been? Is it a place that’s on your bucket list? Anything else you want to know about our trip to France? We love hearing from readers, so please share any other thoughts or questions you have, in the comments!